Dave was an electrical engineer who hated Corporate America, loved numbers, and was drawn to trading because of its freedom.

Dave has a trading system that is a mean reversion system in S&P’s. He likes this system because he gets validated quickly with quick and frequent wins. His system is correct 60% of the time, and when he is right, he makes 1x his risk. This system has an expectancy of .20.

Dave thinks that he would be set if he could just increase his win rate points by 10%. In doing his analysis, the best way he finds to increase his win rate is to double the size of his stop. By doubling his stop, Dave finds that many of his losers revert to the mean for a profit and avoid stop-out in the process. However, by making this adjustment, he reduces his expectancy from .20 to .05. This is a common dilemma in trading. If you want a higher win rate, you typically have to worsen the system. If you want bigger winners, you have to worsen your win rate.

Dave is meeting his psychological objectives and getting worse results in the process. The drop in performance causes him more stress. He now feels even greater pressure to be right because he knows what it means when he’s wrong – BIG DRAWDOWNS! Because he has lots of small winners, Dave also feels pressure to trade. After all, the only way Dave will hit his P&L goals is to trade, and trade a lot. Because of his anxiety to find trades, he constantly battles discipline issues to avoid taking mediocre trades. Since Dave needs many trades to hit his numbers, he is reluctant to step away from the screen. He is reluctant to take a day off. Dave finds himself under more and more pressure—pressure to be right, pressure to trade. Dave is always consumed by markets so there is no time for himself. No time for a workout. No time to be with his family. Ironically, he left his job to find freedom in trading. Right now, Dave feels like a slave to the very thing that was supposed to grant him freedom.

How does Dave turn the tide? He switches from focusing on winning percentages to focusing on large wins. When Dave makes this switch, the pressure begins to release. He starts to make trades that have big wins, and he notices the relief he feels every time one of these large wins comes in. He can breathe again. He finds himself relaxing in drawdowns because he knows he is just one trade away from new equity highs. He now feels free from pressure to be on the trading desk all the time. He is working out again. He goes to the movies with his family, and Dave isn’t checking his phone all the time. He feels like he is making real money now. Money that will be around after the next, inevitable, cold streak. The fantastic thing for Dave is that by focusing on larger winning trades, he now realizes there is no ceiling on his performance. His success is only limited by the size of his winners.

You are probably thinking, “Alright already! I get the idea that I need large winning trades, but where do I find these large winners?!?”. The answer is Slow-Reeds!

The Trailing Stop Technique we will cover today is part of our Slow Reeds Method which identifies many of the largest winning trades we have ever seen. This process is repeatable again and again and again. Let’s show you an example of a typical winning trade you see in the Slow-Reeds System: 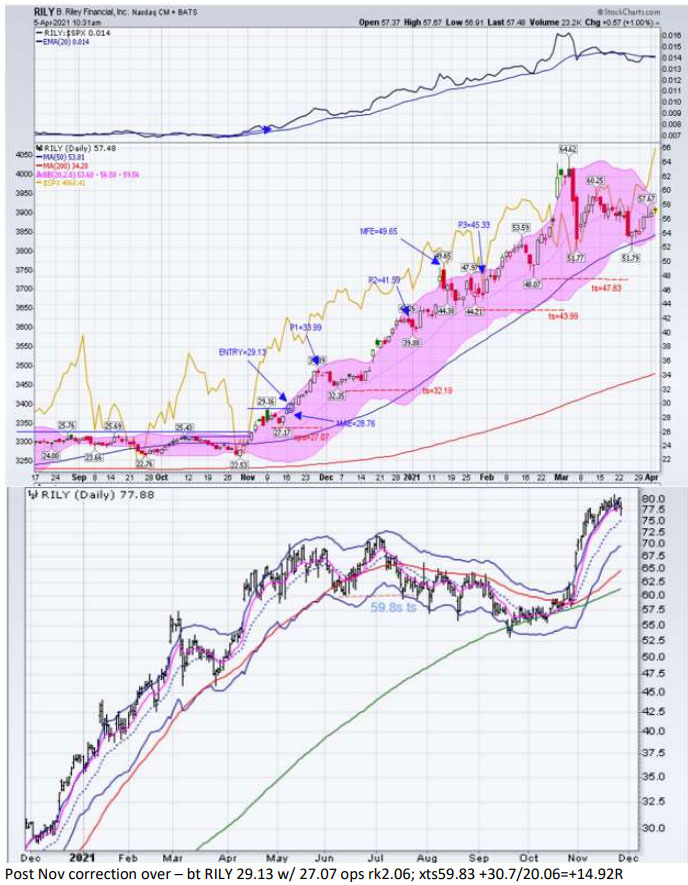 After entry, we moved up our trailing stop three times. First, to 32.19 in mid-December, locking in a profit on the trade. Then, the trailing stop followed our rules and was raised to 43.99 in early February, and in late June to 59.83, where it was hit in mid-July, leaving us with a 30.7 point profit, which on an initial 2.06 risk equated to a +14.9R trade. If you put on these two trades using the 2% risk from entry to OPS (open protective stop) we recommend for Slow Reeds trades, these two trades didn’t overlap and made +21.6R, such that your account grew by 43.2%! In addition, you could have had an additional four to five trades making profits along with these trades. What’s crazy is that these were not even the best trades of the bunch.

Here are some guidelines for using open protective stops (OPS) to limit initial risk-on trades, and trailing stops to follow trades up as they become profitable.

Before entering any order, always determine the maximum risk you want to take. The stop represents the maximum number of points that a position can move against you before triggering the stop-loss order. It is simply the distance between your entry price and your OPS. For example: If you get into a stock at 10 and place an OPS at 8, your theoretical risk is (10 – 8) = 2 points.

As a standard rule, the theoretical risk equals two percent of your total capital or less (usually ½ %-2 %). For example, if you have a $1,000,000 account, you should only risk $20,000 per trade in theoretical risk. We suggest working up to 2% risk in Slow-Reeds trades, as you get a track record of consistent winners under your belt. 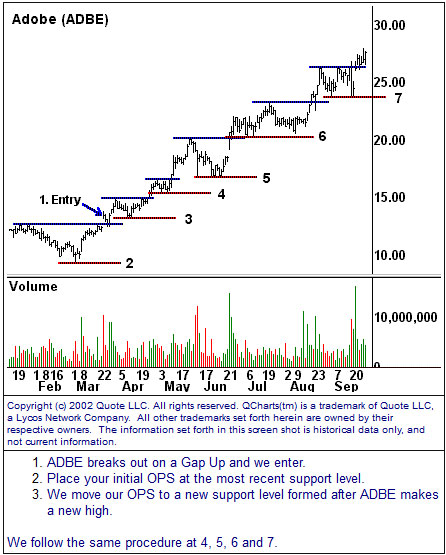 Once your position is established and the stock begins to move in your favor, you should move your OPS up to lock in profits. The strategy I use is similar to how I place my initial OPS. Here’s an example in ADBE in the chart above.

You need at least two down closes IN A ROW in the decline/consolidation and a couple of weeks+ of action (11 bars minimum) in total to count it as a potential trailing stop base to move your stop underneath. Only move the trailing stop under the decline low when a new high has been made in the stock (close over prior high). Having two down closes in a row shows some selling coming into the stock. When we close above the base, it confirms that the selling has been absorbed and new buying is strong enough to drive higher prices. The base becomes a proven level that if taken out, buying within this stock isn’t strong anymore, and it’s time to get out.

Once you have a valid consolidation/correction, with two down closes in a row, and 11 days below its high, it then closes above that prior high. Move the trailing stop 0.5% of the stock price below the previous low levels of that consolidation/correction to give your stock plenty of wiggle room as long as it keeps trending higher.

Let’s look at another couple of real-time examples over the last market campaigns to get a feel for how this works.

On March 24, 2020, one day after the crash low, we got a volume thrust buy signal, followed by confirmation the next day as reported in Reedstrader Daily Service. We started hunting for base breakouts that met our Slow-Reeds entry criteria. One of the earliest breakouts after the bottom, that we highlighted in the April 6, 2020 edition of Reedstrader Daily Service, was Amazon. This very liquid, large-cap stock met our criteria and offered a safe first play for a budding move. The trade was to buy AMZN w/an 1889.05 OPS. It opened the next day at 2017.11, meaning a risk of 128.06 points or 6.35%. AMZN flagged and then shot up nicely, making new highs shortly after. On April 16th AMZN made a new high and then corrected/consolidated, making two down closes in a row on April 27th and 28th. It tried to break out but fell back into that consolidation and then bounced off 20EMA support, holding 12 days under the prior all-time high before closing above the consolidation high on May 20, 2020. With the close over the valid 11-day consolidation, we note the low of that consolidation was 2256.38, and so we take 0.995 of that to get our new trailing stop of 2245.08. Now we have a trailing stop above our entry and have what WD Gann called a trade with “nothing to lose and everything to gain” because even if your trailing stop is hit, you will still profit. The goal of our trailing stop is to continue to ride the trend as long as the stock is behaving well. 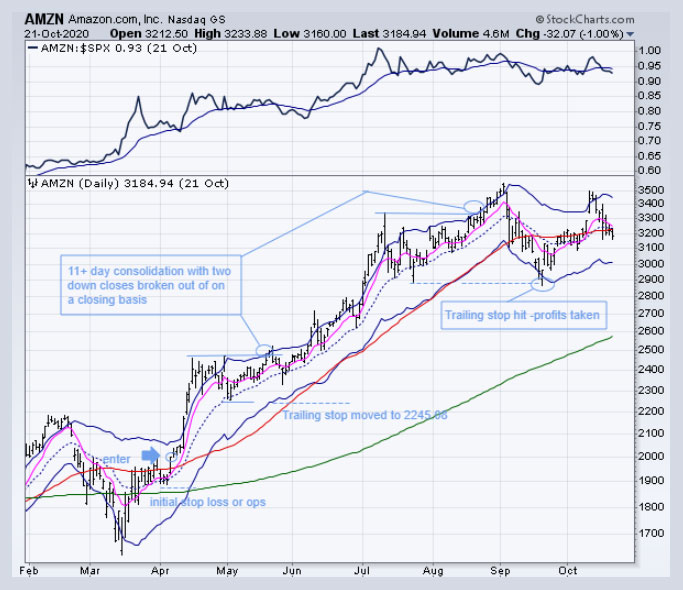 A technique like the Slow-Reeds Trailing Stop supports traders to follow the Golden Rule of “Cut your losses and let your profits run”. We continually make the point that large winning trades are the secret sauce of successful trading. We are constantly bringing up this point because most traders are focused on how to increase their win rate, so they don’t have to be wrong. However, the road to increased win % is misunderstood because it leads to the road of mediocrity. In some cases, it can even lead to ruin.

Trailing stops don’t catch every tick of a profitable trade. Still, they provide a mechanical way of allowing strong stocks to continue running until they show they are running into more serious technical problems. We hope you can make use of this technique.

We like the Slow-Reeds trailing stop as a way of following up our trades, locking in profits, and letting them run until the stop is hit.

This Trailing Stop method is how you’ll want to trade growth stocks:

Slow-Reeds has worked effectively for many decades of real-time trading.

The Slow-Reeds Method combines superior stock patterns with outstanding market timing. Slow-Reeds is an opportunistic method that creates an environment that can produce great trades a few times a year. Slow-Reeds won’t show you these trades every day, but if you understand the method and monitor for market corrections to activate Slow-Reeds, just a few trades a year can make your year a profitable success. That means that you could focus on other things for much of the rest of the year. You can trade Slow-Reeds and have a career. You can use Slow-Reeds to support the dream life you are looking for because you have a method in your portfolio that will give you those large R-winning trades that will make the difference.

The great thing is you only need a few afternoons of your time to learn the method, a charting package that is less than $25 a month, and you can be up and running! If you feel like you need more support, we have Masterclasses that walk you through all implementation while learning advanced techniques along the way. We also have newsletter services that show you the trades so the service can do the work, or you can use the service as a check for your work. However, Masterclasses and advisory services are unnecessary. You will leave the workshop with your trading plan that you can use right away to start scanning for these outstanding trades!

The Slow-Reeds Trading Workshop starts this Thursday. Your chance to bring these large winning trades into your portfolio is only days away.