In May 2018, Bloomberg launched a cryptocurrency index called The Bloomberg Galaxy Crypto Index. At the time Van pointed out an index of this nature was one of the first steps toward widespread institutional involvement.

Fast forward five years and the BGCI index is now available only with a subscription to Bloomberg’s Professional Service. The shift of the index to an institutional platform is a poetic culmination of Van’s long-held belief for crypto data to be commoditized. Where would you say we are on the product adoption curve depicted below?

The index launched on July 13, 2021 but calculates historical values back to 2011 based on the index methodology . The index had a notable peak in May 2021 of 5,547 and then dropped significantly until July 2021. It set a new high on November 9th of 6,215.99 and since then, has been sliding down – until recently. After dipping below 2,000 in June and July, it has been consolidating in a sideways range. You can see the recent price action below in the YTD chart.

Cryptos are in a “Bear Normal” market at the moment, however, for the first time since May, the market type crept briefly into the “Neutral” category. The last time this happened, the market followed through with a large sell-off. Will the results be different this time with the contracting volatility?

The heatmap below breaks down the calendar year-to-date performance by market capitalization. Bitcoin’s 59.62% YTD drawdown is still its smallest crypto bear market since 2010. During 2018, the market corrected 72% and in 2014, it dropped 62%. Notice some shades of green appearing in the smaller names. 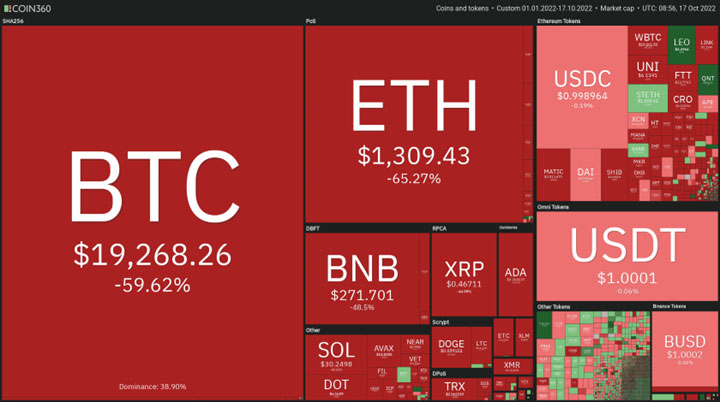 In the past month, ETH has been a big loser and XRP has been strong. Let’s see if the green spots fade over the coming month or start becoming more prolific as part of a broader bottoming process. 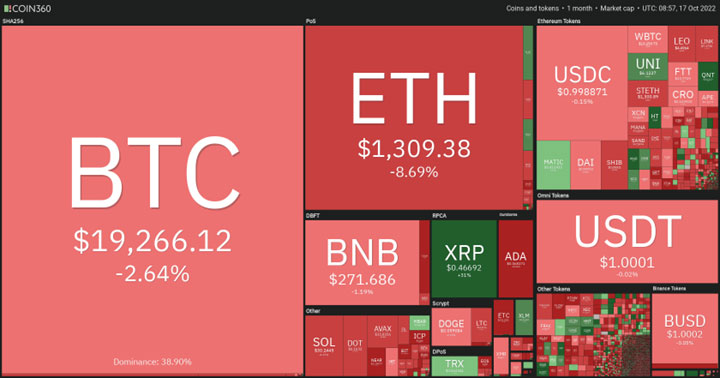 The objective of the system is to outperform a bitcoin buy-to-hold while sleeping easy.

The system is in cash now but the rules will trigger an entry around the $22,400 mark if the June low holds. I’ll keep you updated in the November Crypto Update. 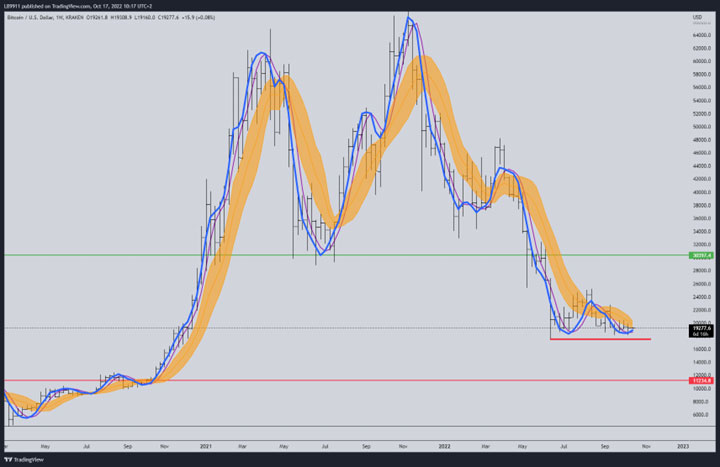 With all the technological changes afoot, it is sometimes hard to distinguish hype from actual life-changing technology.

To cut through the hype, a practical, real-life value add test helps: the “BIA” test. For those unfamiliar, the acronym stands for the “Backpacker in Africa” test.

Relive the following memory with me and then we’ll apply the BIA Test:

Many moons ago, I was walking across the border checkpoint in the Caprivi strip to enter Zambia. The previous three weeks of backpacking in Namibia had been adventure-filled and now I was embarking on the next leg of my journey.

On my person, I had a backpack, a Nokia 3210 and some U.S dollars. In order to get to my destination for the night I needed local currency—the Zambian Kwacha. I asked the border officer where I could buy some Kwacha and he pointed to a bunch of hagglers sitting under a thorn tree. He also said, “Never trust a man that says, ‘trust me’”.

At this moment, I realized three challenges were in front of me. First, I had never seen a Zambian Kwacha note in my life. Next, the exchange rate I had in mind was as outdated as my 9-year-old guidebook. Finally, the money-changing crowd under the tree seemed less than 100% focused on engaging in fair deals.

Not feeling an urge to be ripped off or robbed on a fine Saturday afternoon, I decided a good way of sifting budding entrepreneurs from bad guys would be to ask one of the border soldiers to accompany me to the crowd and oversee the transaction. 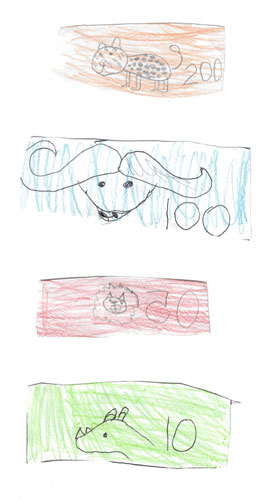 These are Kwachas! Trust me.

One of the soldiers agreed. We started walking toward the small crowd, me with my backpack and the soldier with his automatic weapon. I realized suddenly that I had misjudged the efficiency of my test as an apparent volcanic eruption under the thorn tree scattered people in all directions instantly. When the dust finally settled, there was no longer any trade on the floor of the thorn tree exchange. 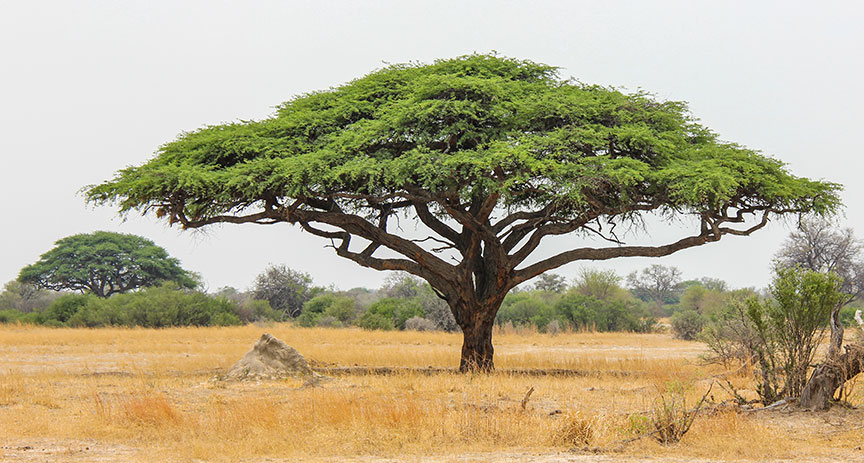 I stood there with the soldier for a while waving three $20 bills around at nothing and no one in particular. The soldier called out in the local language a couple of times and motioned with his free hand as we stood waiting . . . and the cicada’s chorus took over.

Even though I had brought a gun to the transaction, one entrepreneur summoned some courage and approached us eventually. We shared a special kind of “willing buyer, willing seller” moment under the tree and then we all went our separate ways.

The BIA Test and Blockchain

How much has this type of transaction changed following the blockchain revolution?

The answer is rather anticlimactic if you are an old school traveler. Nowadays, crypto transactions in Zambia are easy and fast. In fact, many Zambians actually prefer cryptocurrencies to the traditional fiat currency. Blockchain technology has forever disrupted the Thorn Tree Exchange by moving the trade from shaded soil to servers in distant data centers. Despite a good amount of hype, blockchain really is changing life and livelihoods in all corners of the globe. 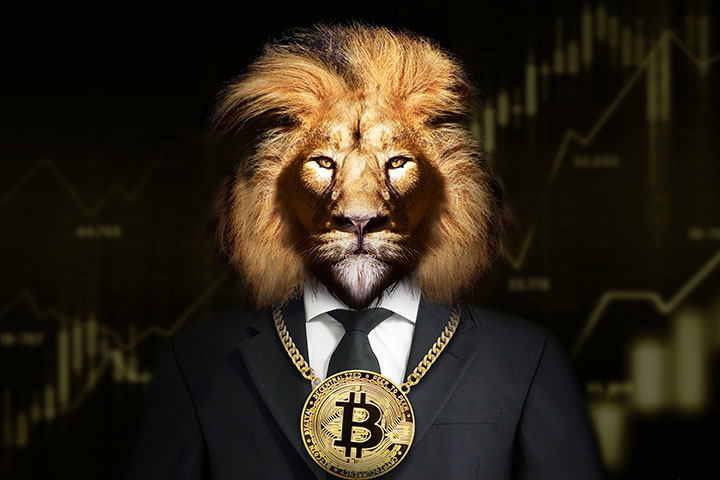 Context is all important and to add some context around recent news events we will focus our attention on the five main types of players and the games they play in the crypto space.

We are leaning on a key Tharp Think principle here: “The map is not the territory. The better my map represents the territory, the better I will function in the world.”

We are not trying to explain the extremely complex, non-linear, open cryptosystem but rather we are looking for a useful lens to identify what may be important changes affecting the ecosystem and, ultimately, supply and demand.

What is “useful” for a trader? Tools that help make money.

On our map the main players and games are:

These are mostly retail speculators with no trading systems or buy-and-holds with no stoploss. The early adopter HODLers have done quite well and with many who are still whales today. Many whales pivoted into other categories. The late adopters haven’t fared quite so well. They may be whales but their average BTC cost is underwater. For HODLers, 1 unit of risk (1R) represents their total capital committed—it’s basically an all-in bet. HODLers have no cash flow day-to-day without selling/staking the holdings.

These are large speculators such as hedge funds as well as the systematized, disciplined, retail traders. Their cash flow is dependent on the gains/losses in the underlying positions on positive expectancy systems. The common denominator amongst traders is a position sizing approach to capital allocation as well as a risk-to-reward approach at a trading strategy level (usually a minimum of 2:1 risk reward). For this reason, private equity and venture capital is also included in the Trader category as they have definite entries and exits as well as strict position sizing rules.

This includes the major commercial players who design blockchain infrastructure, have already adopted blockchain or are actively in the process of integrating blockchain and its related products and opportunities into their business models. Their cash flow originates from their usual business activity. Blockchain offers operational efficiencies improving cash flow and customer experiences.

For the small business, blockchain offers the opportunity to level the playing field (or should we say “paying” field) to unlock cash flow.

This represents the market makers, brokers & exchanges (both traditional and DeFi), banks and asset managers. Cash flow is ongoing from volume in its various shapes of trading, spreads, commissions, assets under management and even order flow payments.

This represents governments as well as any free market interventions in its various shapes, sizes and forms. The profit of all other players is their tax base and, therefore, provides their cash flow. (Plus or minus the impact of a couple trillion Dollar/Euro/Yen/etc., depending on the state of the central bank printing presses.)

Now that we have our main players categorized, let’s look at some noteworthy news items by category:

The chart below tracks the Market Capitalization of the total crypto market. Notice how the market capitalization has been oscillating around the $1 trillion mark. Where will the market cap break to from here – $500 billion or $2 trillion? 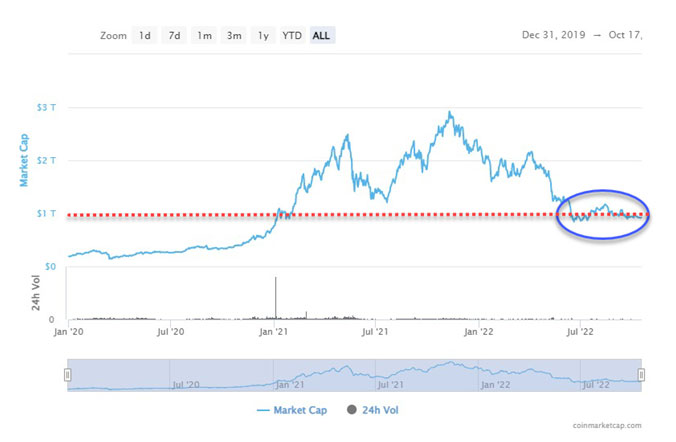 Closely related to market capitalisation is the number of crypto exchanges. In the chart below, notice how exchanges continued to grow long after the November 2021 BTC high. While most market participants believed the November 2021 high was just another “buy the dip” opportunity, the crypto market is still way down almost a year later and a number of exchanges have run out of cash. What’s next on the counterparty risk front?

In the next chart, our focus shifts to stablecoins. The combined market cap of the three largest stablecoins Tether, USDC, and BUSD is currently just short of 15%. Historically, this is high but the market cap did not make a new high in the last two months. This may point to two main possibilities. Perhaps funds are leaving the crypto environment altogether. Alternatively, funds may be getting deployed into cryptos on sale given that the number of BTC whales have been net buyers since September 27th. 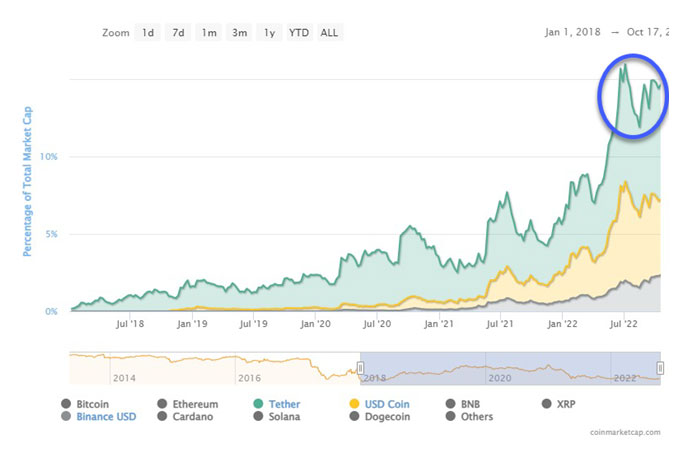 The table below shows the best and worst cryptos in terms of Market SQN scores. Of the 100 cryptos that we track, 47 are bearish, 13 are very bearish and 29 are neutral. Notice out of the top 15, 11 are now bullish. Although the overall market remains bearish, this is the third month in a row that we are seeing an improvement across the buckets. Does that make this market a young bull or an old bear? The market may let us know shortly.

This is a free newsletter to the VTI community. It’s not about making any recommendations for what to buy or sell. Instead, it’s about understanding how money is made in crypto assets.

Enjoy your own game!

P.S. Our newest workshop teaches a crypto-specific system that is flexible, time-efficient and easily automated. Produce large winners, even if you’re not a crypto expert, when you sign up for the PRX Crypto System Workshop on November 12th.