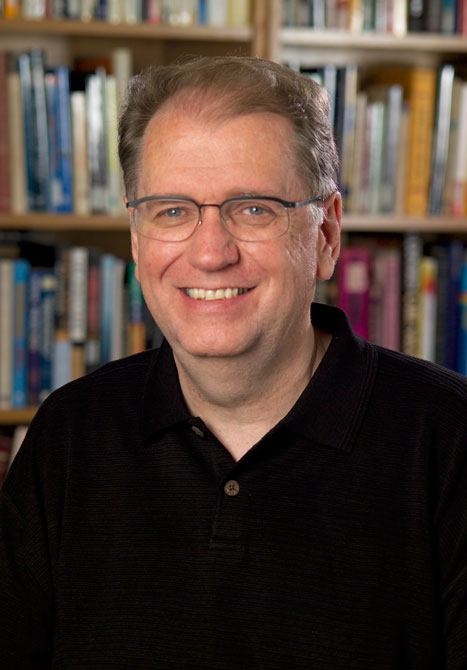 We did not publish a Crypto Update last month in mid-September. My laptop had crashed (the whole motherboard had to be replaced) and we started driving back home to North Carolina from Las Vegas. Thus, I have a lot to catch up on with you this month.

When it started in mid-2018, the index was at 1,000. It reached a new peak in May this year of 3,539 and then dropped significantly in the following weeks. The index is now close to its all-time high once again. 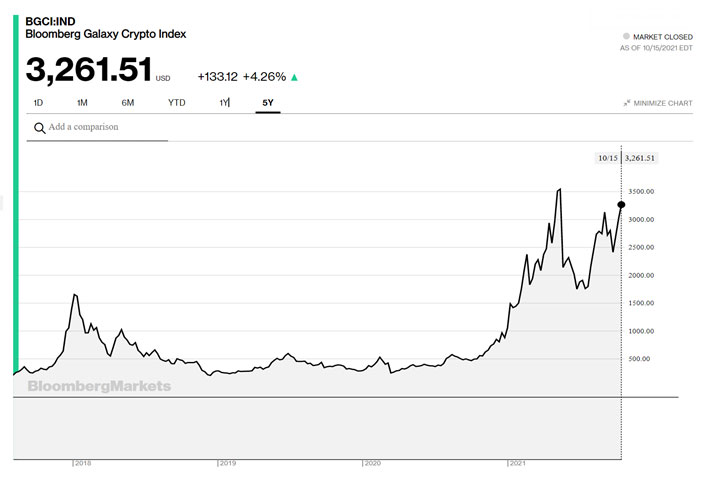 Bitwise also started a similar index called the HOLD 10 Index in 2017. You can invest directly in the index through Bitwise’s HOLD 10 Private Index Fund. The only difference between the HOLD 10 and Bloomberg’s Index is that the Bloomberg Index holds Ethereum Classic (ETC) while Hold 10 has Stellar (XLM).

Earlier this year, China essentially banned all BTC mining and then more recently outlawed crypto ownership and trading by Chinese citizens. Many of China’s miners have moved their operations to the US (mainly Texas) and major crypto exchanges like Binance have made it very difficult for the Chinese to trade crypto. Of course, trading is still possible for them on peer-to-peer exchanges like Uniswap.

Date of the All-Time High Closes:

Notice the huge gains in everything since mid-September. 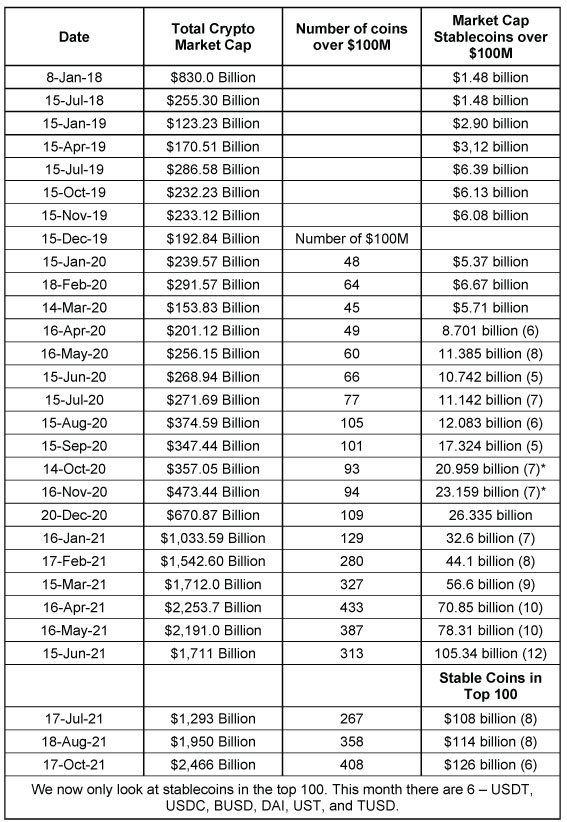 The next table tracks data about the market cap for crypto. Notice the big jump in market cap and total cryptos listed since mid-August. 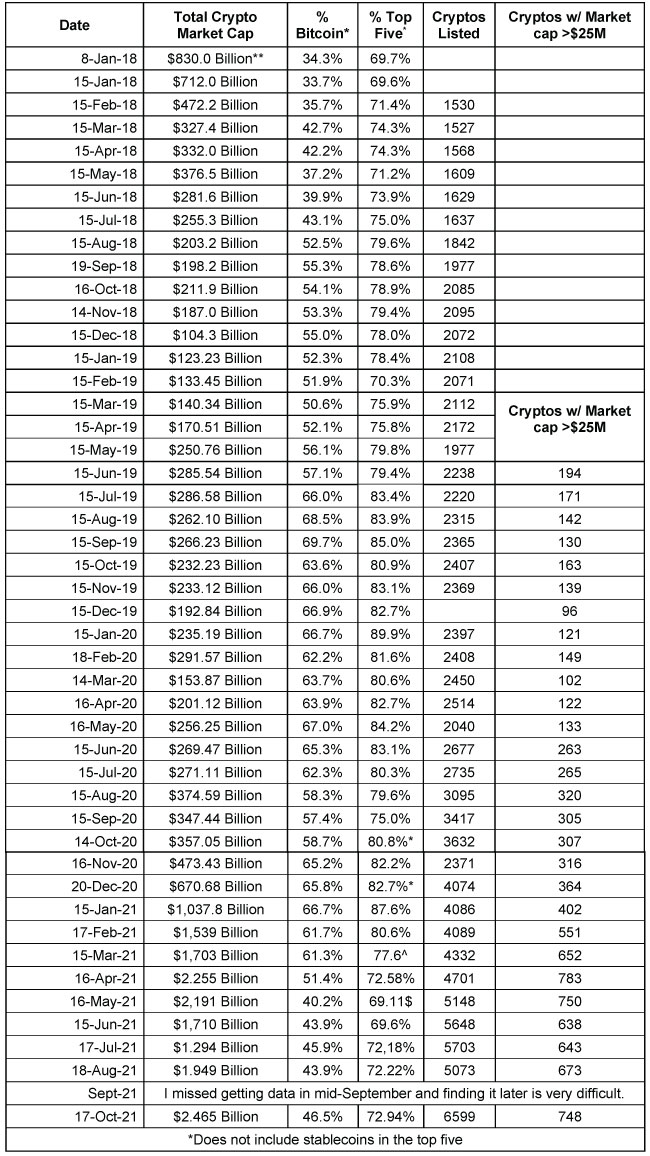 * Bitcoin was as high as 90% of the market cap of all cryptos at the beginning of 2017 to as low as 32% at the top of the market. Part of the difference is that there are now over 12,800 cryptocurrencies (but more than half are not on exchanges and don’t have a market cap) and the number keeps going up. BTC is up to 44% dominance and ETH is now up to 18.2%.

The table below shows the 30 best and 30 worst cryptos ranked by the Market SQN (100 days) for the 100 cryptos that we track. 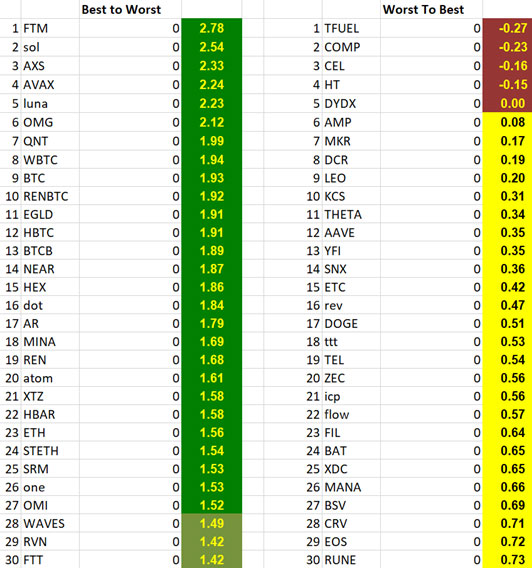 Top Performing Coins of the Top 100 in Market Cap 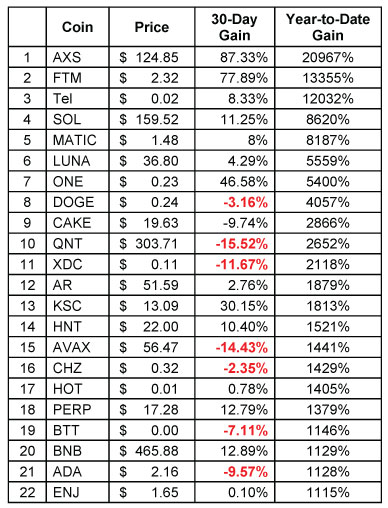 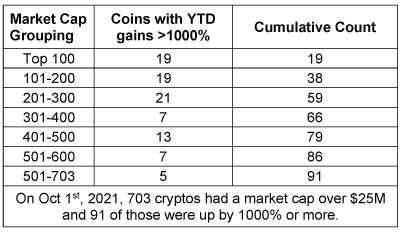 People talk about BTC being volatile and risky. But where can you find something that has made over 1,000% in 3 of the last 12 years, over 100% in 8 of those years, and had only two losing years? There is only one other asset class besides BTC with anywhere near equal performance – other cryptoassets. And despite the bloodbath that began on May 19th, it’s again up over 100% in 2021.

If you can tolerate 50% and larger drawdowns, buy and hold has provided huge returns. Our Super Trader BTC system beats buy and hold and eliminates those big drawdowns but we have to pay taxes on our profits because we are in and out of positions.

While gold has been viewed traditionally as a path to safety, it has underperformed during the pandemic and with the probability of additional trillions in massive government spending. The gold price certainly doesn’t reflect a big devaluation of the dollar as some newsletters are promoting. Many people cling to the belief that gold is the asset to hold to preserve value but that may no longer be the case now that the world has a new form of money/value.

Earlier in 2021, gold had about 40 times the market cap of cryptos. Now, even though cryptos are worth $2.4 trillion, gold still has about 5 times more market cap. If all the money in gold were to go into BTC, BTC’s price would reach about $370,000.

Here is what some with investing savvy are saying now about cryptos and BTC.

The major trends in cryptoassets are coming from four different areas – NFTs (nonfungible tokens), Blockchain games, Ethereum killers, and DeFi (which is not as strong right now). Let’s look at some of the best coins in each area.

This is a free newsletter for the VTI community. It makes no recommendations about buying or selling anything. Instead, it’s about understanding how money can be made in cryptoassets. In full disclosure, I personally own about 100 different cryptoassets, including many of those mentioned in this letter.