In May 2018, Bloomberg announced that they had formed a cryptocurrency index called the Bloomberg Galaxy Crypto Index. Since Bloomberg only caters to institutional clients, an index of this nature was one of the first steps toward widespread institutional involvement. The index tracks five major crypto assets: Bitcoin (BTC), Bitcoin Cash (BCH), Ethereum (ETH), Litecoin (LTC), and EOS (EOS). The index started in May 2018 at 1,000. It reached a new peak in March 2021 of 3,765, dropped significantly until July 19th, and then set a new high on November 9th of 3,870 and has since dropped about 1,000 points. 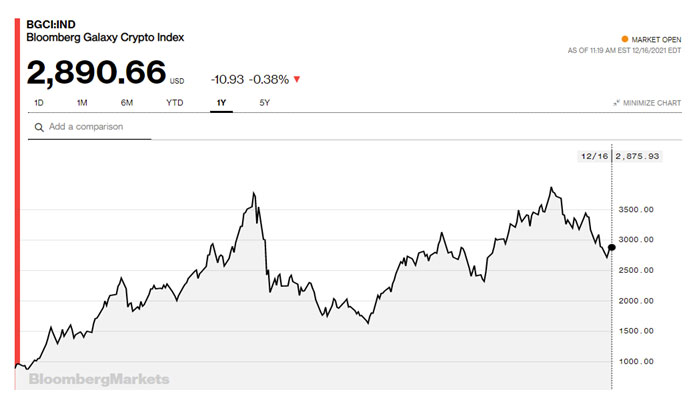 Bitwise has also opened the Bitwise 10 Crypto Index Fund that you can actually invest in. The biggest difference between this index and the Bloomberg Index is that the Bloomberg Index holds only five cryptoassets, whereas the Bitwise Index Fund holds ten, as follows; Bitcoin, Ethereum, Solana, Cardano, Litecoin, Chainlink, Bitcoin Cash, Polygon, Algorand, and Uniswap. What’s crazy about any index is that the maker of the Index always manipulates it in some way by adding or subtracting components. For example, GE was the last remaining stock from the original DOW 30 list. And now that Index doesn’t have any remaining components. I don’t plan to follow changes to the indices over time. However, if you want to tell me about changes, then I’d be happy to update what’s on the list.

BTC hit a new all-time high of $68,789.63 on November 10th but has had a sharp downturn since then. On November 15th I talked about market manipulation in the crypto market, which often consists of a drop in the price of BTC of 20% or more in a few hours while US investors are sleeping (and during the weekend). Then, all other cryptocurrencies seem to follow as they are for some reason highly correlated during down markets. Then, the media comes out with a reason for the new price (i.e., BTC dropped because investors don’t like the idea of the Fed making at least three interest rate adjustments next year). It’s all manipulation and propaganda.

Right now, I see no reason to trade any cryptos as this is now at least a mini-bear market.

In late 2017, I said that cryptoassets were the biggest institutional revolution since the Industrial Revolution and that they represented the investment of a lifetime. Institutions were not ready for, or capable of, participating in that revolution, so they “pooh-poohed” cryptos. What that really meant was that they needed the price to crash until they were ready to capitalize on it from all sorts of fee-based products. So, it crashed big time in 2018 (down 85%) and they called it all sorts of nasty names. The SEC cooperated nicely with the big banks by saying that most cryptos were securities and subject to their regulation. But today, you can trade most of the major cryptos on US exchanges. Many of the investment bank CEOs who have said negative things about it in the past now have major positions or services for their clients. For example:

I’ve also started including BGCI prices in the table. 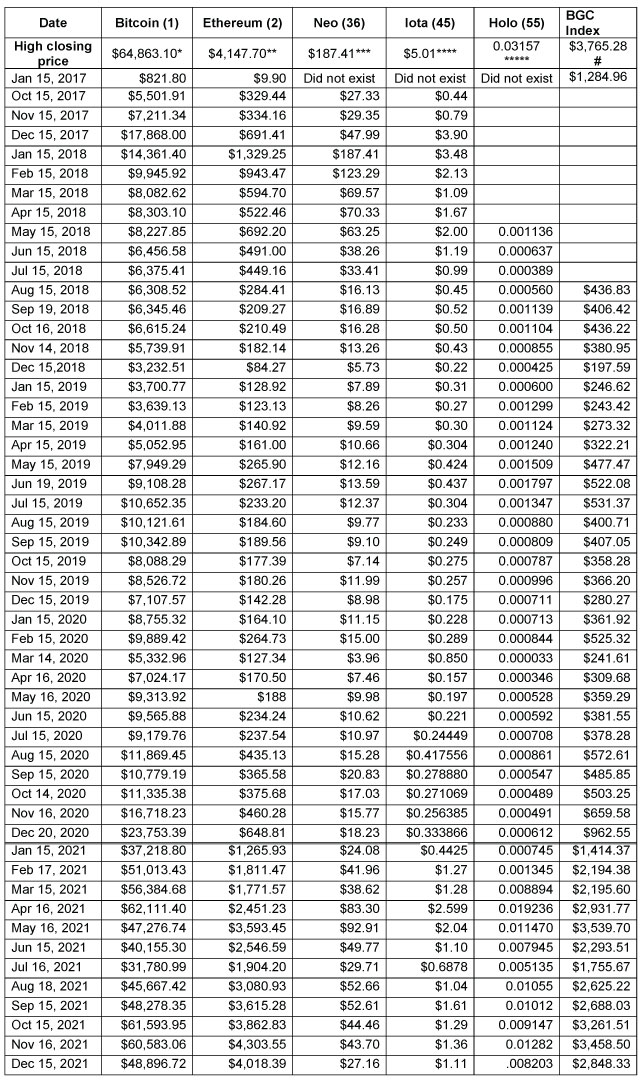 Date of the All-Time High Closes

Despite the recent price pullbacks, notice the huge gains in everything year-over-year.

The following table tracks the amount of money in stablecoins in the top 100 of which have a market cap of over $100 million. 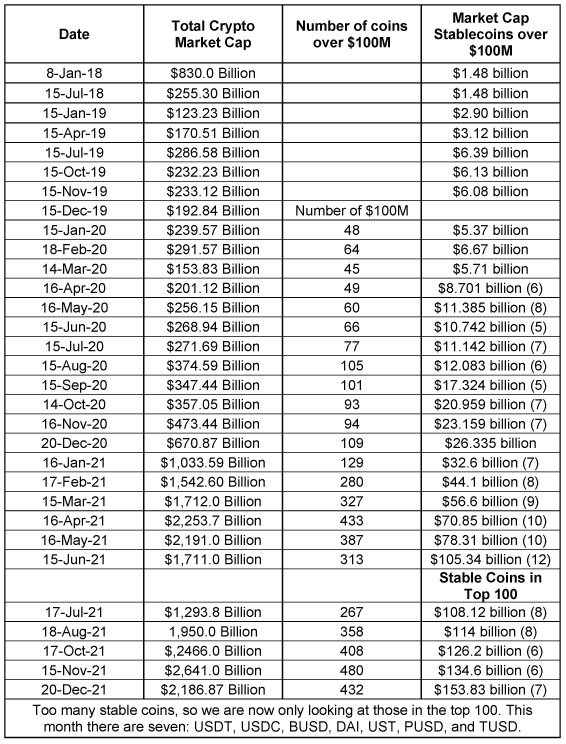 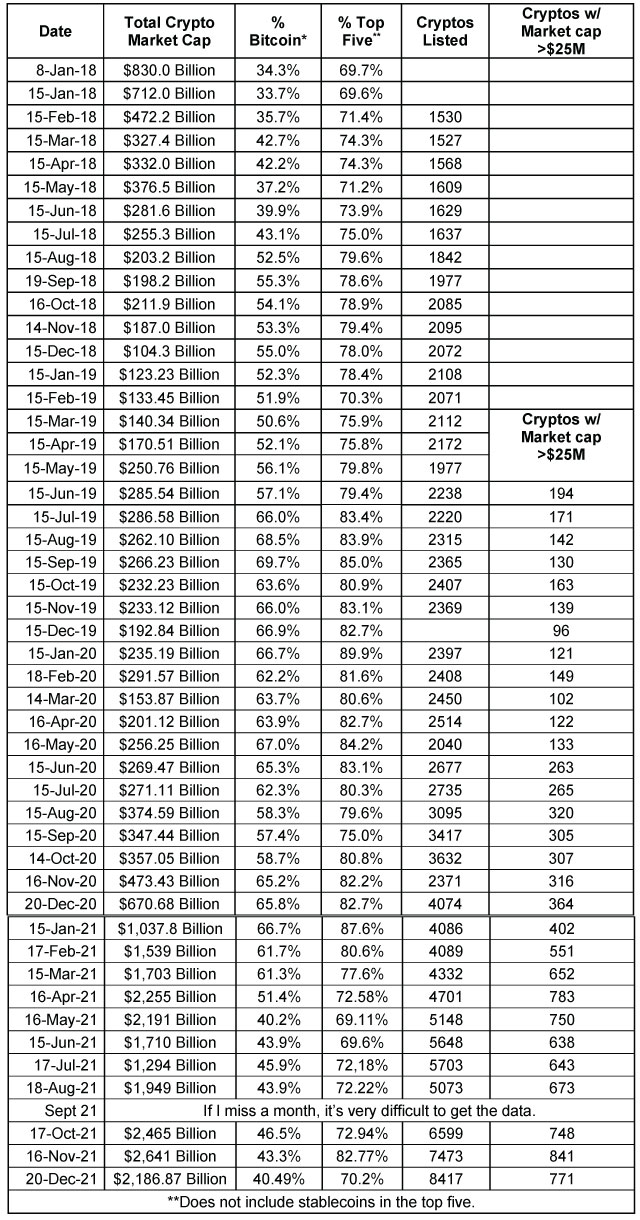 * Bitcoin went as high as 90% of the market cap of all cryptos at the beginning of 2017 to as low as 32% at the top of the market. Part of the difference is that there are now 15,879 cryptocurrencies (but more than half are not on exchanges and don’t have a market cap) and the number keeps going up. BTC is up to 40% dominance and ETH is now up to 21%.

You can see the pattern here. Market cap for crypto has increased 21-fold since December 2019. Doesn’t that seem significant to you? BTC has gone from 55% market dominance down to 40.5%; however, the top five coins, not including Tether, are still more than 70% of the market cap.

The new rage now is Decentralized Finance and the Metaverse. And this group includes most of the top coins. And cryptos continue to amaze me. For example, when NFTs first came out, I thought they were a joke. People would pay over $1 million for digital artwork? But suddenly when I learned that you could create a digital casino or amusement park and then because of NFTs claim that as your own, well it does open up a whole new universe. In this case, I call it the third level of illusion in which we now play.

The table below shows the best and worst cryptos in terms of the SQN 100 of the 100 that we track. It shows the top 20 and the bottom 20. 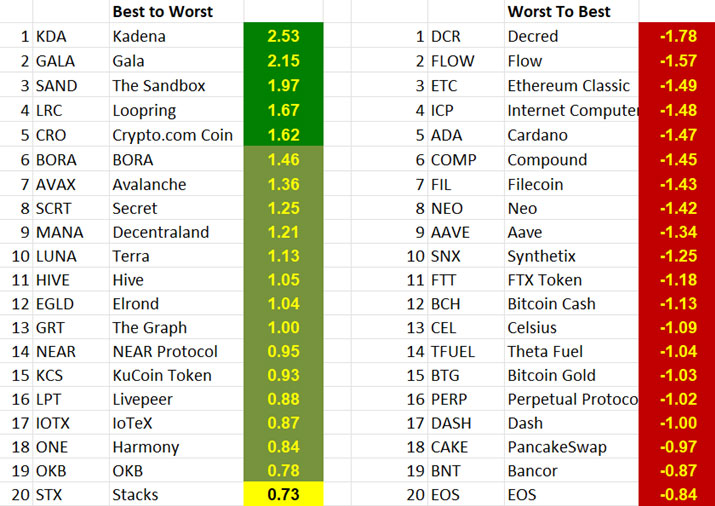 Notice there are five strong bull and 20 strong bear. If you want to know the secret Metaverse crypto that so many newsletters claim is the new investment of a lifetime, it’s probably SAND.

The data below shows the top-performing cryptos of those we track. Top performing, in this case, means gaining over 500% since the start of 2021. 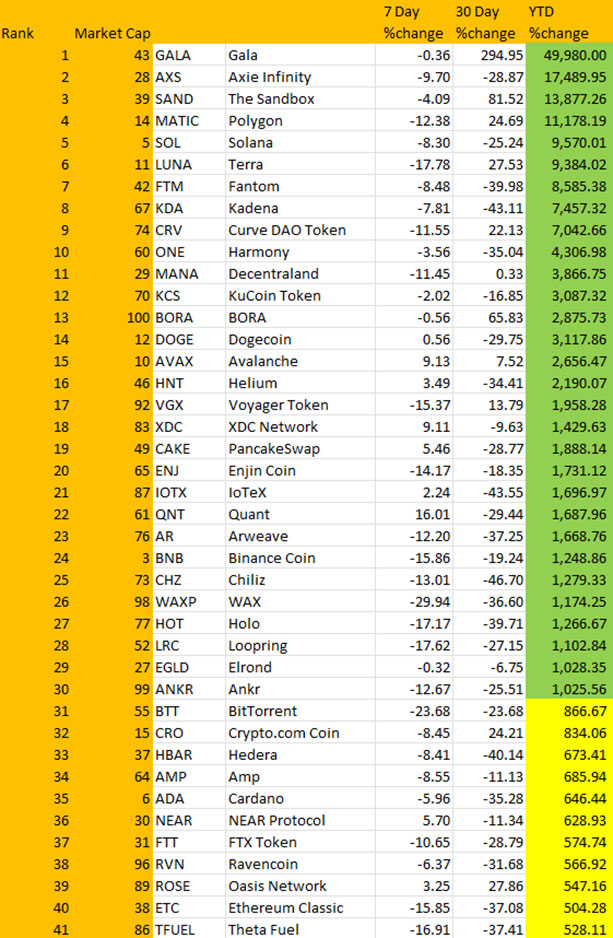 That’s not bad. But remember, these are statistics, not predictions or recommendations. I recently had a Super Trader candidate say the call for MANA was brilliant, but I didn’t recommend anything. I just showed people the current performance. And MANA is no longer up 5,000%.

We looked at the top 300 coins in market cap and their year-to-date gains. And I’ve summarized those in the table below. This data was accurate as of about noon on Dec 21st.

In the top 100 coins, the stablecoins are all around zero or slightly negative and four coins are negative for the year, NEM (XEM) is the worst, down 47%.

People talk about BTC being volatile and risky. But where can you find something that has made over 1,000% in three of the last 12 years, over 100% in seven of those years, and had only two losing years? There is only one other asset class besides BTC with anywhere near equal performance – other cryptoassets. And despite the bloodbath starting on May 19th, it is up again over 65% in 2021.

This is a free newsletter to the VTI community. It’s not about making any recommendations for what to buy or sell. Instead, it’s about understanding how money is made in cryptoassets. Just for full disclosure, I personally own about 100 different cryptocurrencies, including many of those mentioned in this letter. Those are long term investments that I plan to keep and treat like a second retirement plan, taking out about the same amount as my RMD for my 401K each year.