Cryptoassets have had a flat three months followed by three months up with last month being a huge uptrend… Most of the major cryptoassets are up over 100% since mid-December. That’s easy to see just looking at a long-term chart of Bloomberg’s Galaxy Crypto Index. So, at this point I’d recommend to my Super Traders who are interested in cryptos to establish their core positions. For an idea of what “core positions” might mean see the second article in Tharp’s Thoughts last month (LINK TO IT).  That was not a recommendation but simply an idea of how to think about a buy and hold strategy with cryptos. 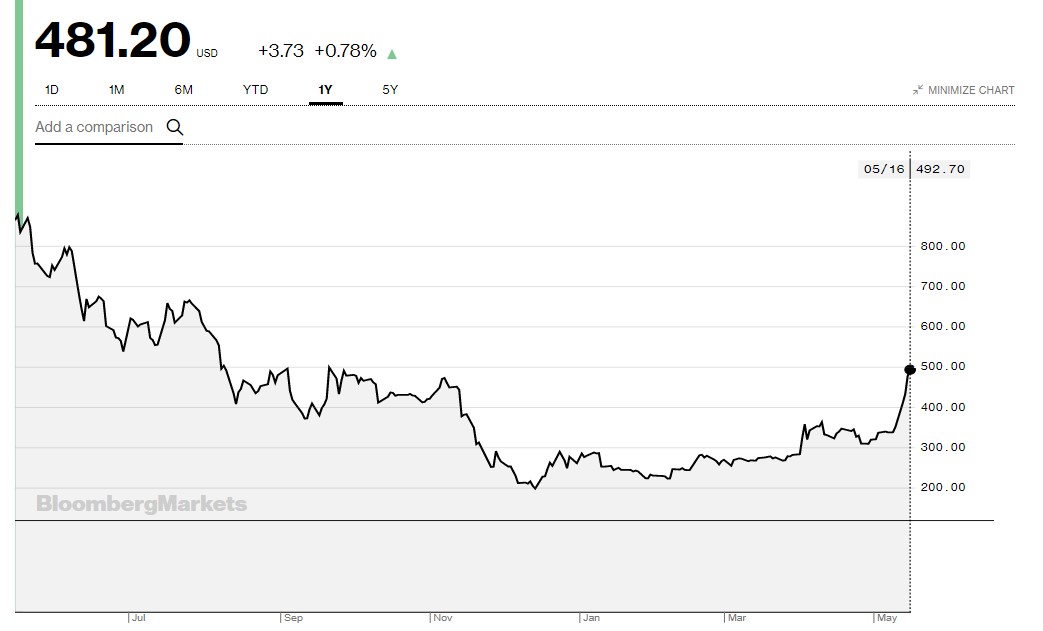 Bloomberg’s Index tracks ten major cryptoassets and Bloomberg started the index in May, 2018 at 1000— at about the dotted vertical line on the chart. Thus, it’s been active for about a year and it is just under 50% of its starting level.
The table below tracks the price of five major cryptoassets across three generations of the technology –
Just because BTC is a 1st generation crypto does not mean it is likely to die off and be survived by the later generation cryptos. It’s hard (impossible?) to predict which cryptoasset will thrive or even survive as we move forward as there are so many variables at play. Technology, use case, adoption, support, and multiple other factors come into play. For now, we monitor these five cryptos because they represent several relevant aspects: public ledger – BTC, smart contracts – ETH+NEO, scalable contracts at minimal cost – IOTA+SKY. 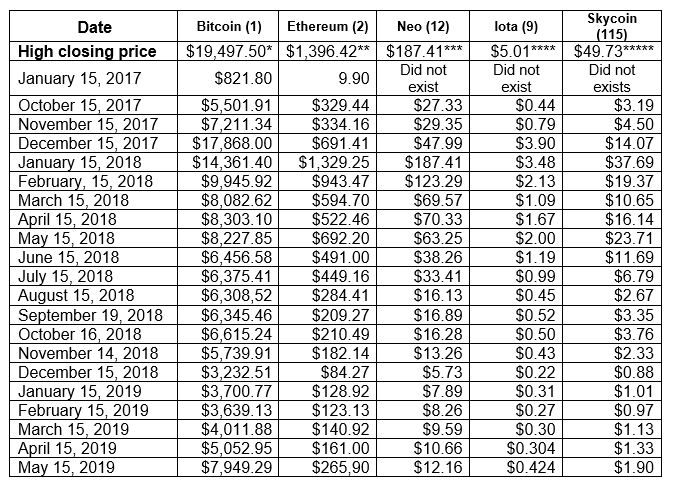 Date of the All-Time High Closes

All five of these cryptos are up significantly from mid-December. Most have at least doubled, and ETH is up over 300%. Last month I said it was a low-risk time to enter the market, but I wasn’t sure we had seen the bottom. Now it looks as if we’ve seen the bottom. The risk is less, but this could easily be a 100 times move for cryptos as we should get widespread institutional involvement over the next two years, which could take the crypt asset total market cap way into the trillions.
The market cap table below shows a similar market-based pattern to the individual cryptos in the table above. The total market cap for cryptos is the highest it has been since November. 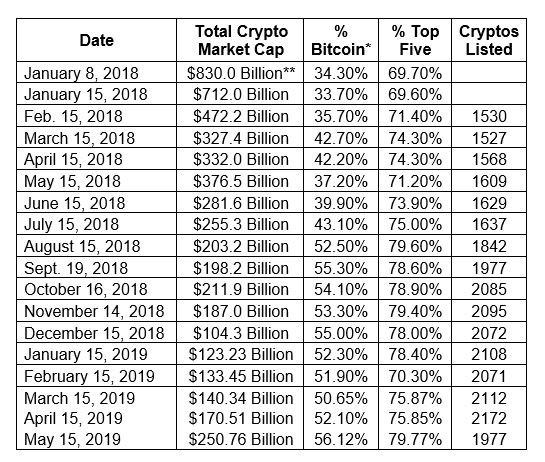 * Bitcoin was as high as 90% of the market cap of all cryptos at the beginning of 2017 to as low as 32% at the top of the market. Part of the difference is that there are now nearly 2000 cryptocurrencies. So, the number keeps going up even though the market cap goes down.

The data in both of these tables comes from www.coinmarketcap.com.

We have two models which help us evaluate cryptos using the Market SQN methodology. Here are the top 15 cryptoassets by the Market SQN® score (100 days) from the first model – 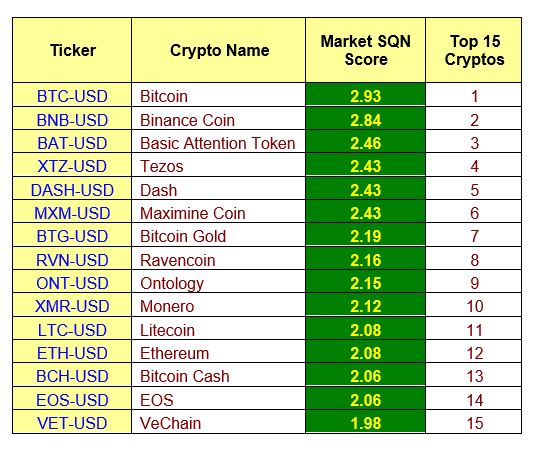 The top 15 are now all strong bull. And you’ll notice that Bitcoin now leads the pack with an SQN® 100 score of nearly 3.0. But most of the major coins are very strong. The only one I don’t know about in the top 15 is MXM. Plus, BTG is probably not one that will stick around for a long time.
The next table shows the bottom 15. We have three cryptoassets in strong bear territory. And another six in bear territory. This means that we now have over 100 cryptos in our list that are neutral or better. 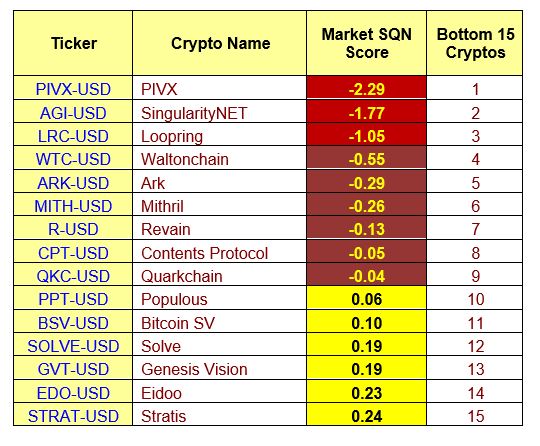 The next chart shows you overall ranking of all 110 cryptos we track. Thirty percent of them are strong bull and another 45% are bull … making 75% of them bullish. We haven’t seen that in a long time.
Sixteen percent are sideways and only 9 of them (8.2%) are bearish. 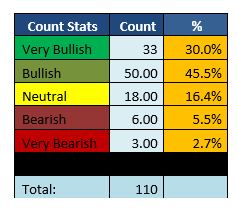 The next chart shows the 97 coins we track through Yahoo. 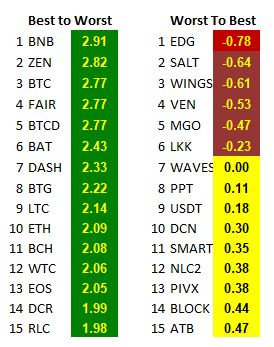 It’s interesting that the list is somewhat different and BTC is third, not first. This also shows you that it’s hard to trust data here. For example, in the first chart PIVX was by far the worst coin, but in the yahoo data, it is the 13th worst, but it’s sideways here and a positive number.
The next chart shows how many of the 97 coins fall into each category. Here, 79.4% are bullish and only 6 (6.2%) are bearish. 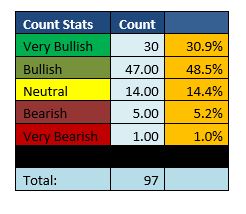 The next two tables show our major categories of coins. Here it is hard to focus on any particular category as all of them are generally bullish.

And here the second table, has categories that are not quite as strong. 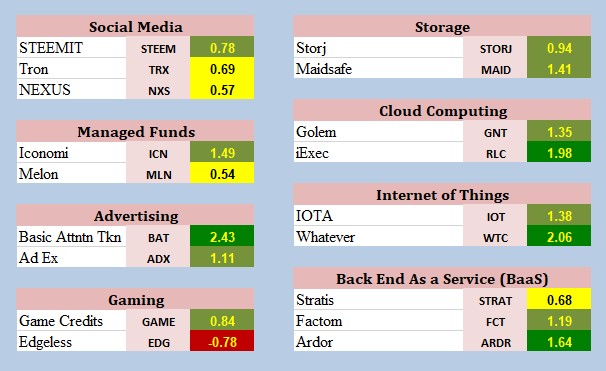 We also have a market type chart for BTC that is similar to the one we use for the S&P 500. It’s strong bull as shown in the chart below.
This is the year that I except significant institutional involvement in cryptoassets to begin. Here is what’s going on in 2019.
Both Facebook and eBay plan to introduce crypto coins to use on their sites. However, these do not fit the criteria of a decentralized coin because they are controlled by one company. Nevertheless, they will make millions of new people a little bit more familiar with cryptos.
And finally, I was told that you could use BTC to pay for your Starbucks coffee now. Starbucks is a partner in BAKKT so I’d expect that soon. However, buying coffee with BTC is a taxable transaction, so would you really want to do that?
In May of 2020 BTC will start producing half as many coins in each cycle. The average block generation time is 10 minutes (actually about 9 min and 20 seconds). Right now, 12.5 BTC are mined in each cycle, but on May 27, 2020, that will drop to 6.25 coins per cycle. This means the supply of new coins, just at the time when institutions want them, will drop.
BTC usually rises about 200% in the year prior to a halving. However, I would expect that to be much greater in a roaring bull market which is possible for 2019.
I found it interesting that one cryptoassets newsletter said that the last thing you should buy is GBTC because they charge a premium. And I assume there was some belief that an BTC ETF would be available in 2019 with no premium.
Here is a graph of GBTC since June 2018.

I think the premium makes it even better. Why? At the bottom of the bear market in BTC when BTC was about 3000, GBTC still sold at a 20% premium. Recently that’s been as high at 33%. That means you not only take advantage of a rise in the price of BTC but also a rise in the premium. During late 2017 and early 2018, I saw the premium at 100%. For example, when BTC was near $20,000, GBTC was about $35 – reflecting a price of about $35000 in BTC. That’s quite possible later this year.
However, an ETF could also come out in 2019 and dramatically decrease the GBTC premium. Anything is possible.
Finally, we now have a spreadsheet that does the same for BTC as we get for the S&P 500 on our monthly updates.
First, the SQN 100 for BTC has been Bullish since April 1st 2019. It has been strong bull since April 30th.
Here is a weekly chart of the price of BTC.

The next chart shows the market type

And finally, the third chart shows the volatility. BTC will be a lot different than the S&P 500 and I’d expect it to be very volatile most of the time.

What’s interesting is that when it almost touched the quiet range, the new uptrend starts.
The purpose of this report is not meant to give investment recommendations or to be predictive in any way. It is meant only to give you a status quo of the cryptoassets markets. Until June 15th, this is Van Tharp.
Editors note: We have two cryptocurrency events coming in June. The first includes these assets in your Forex trading (the full day is free to Forex Live students) and second is Van Tharp’s Cryptoassest class exclusive for Super Trader Students.