All of those who joined the Super Trader program under our GBTC program are doing quite well. At the close on Monday, November 16th, GBTC was at $18.86 – that’s a gain of 54% in one month. We started our GBTC offer in July when BTC was about $9,200. Now it’s $16,800 for about an 82% gain overall. One person who put down $10K for ST Foundation has already been able to make the second payment for the program out of profits from GBTC. 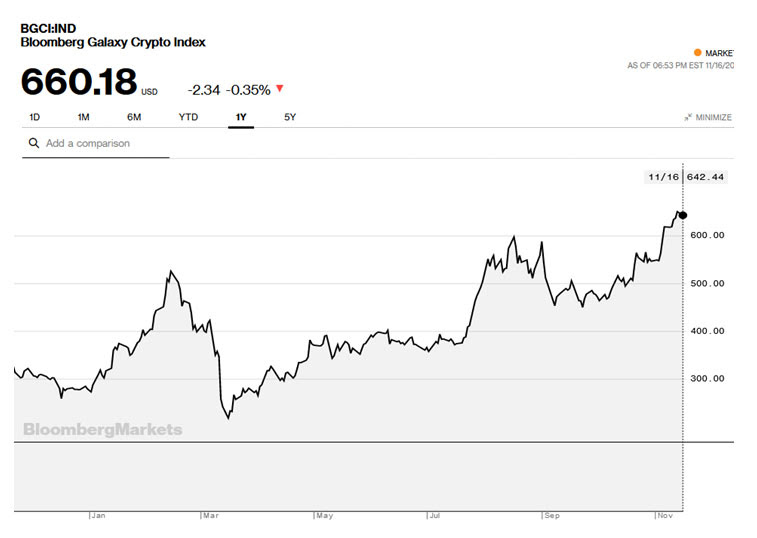 The table below tracks the price of five major cryptoassets across three generations of the technology along with Bloomberg’s index: 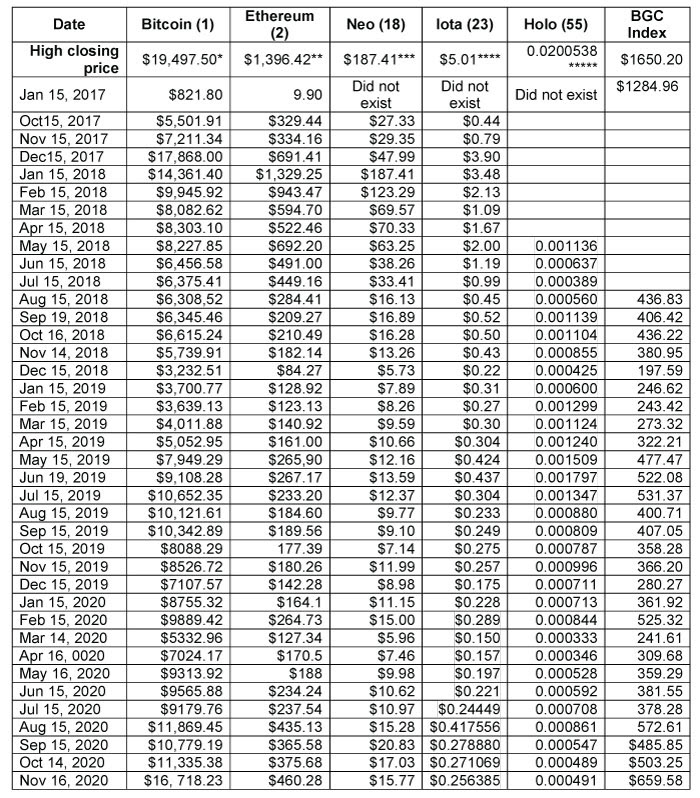 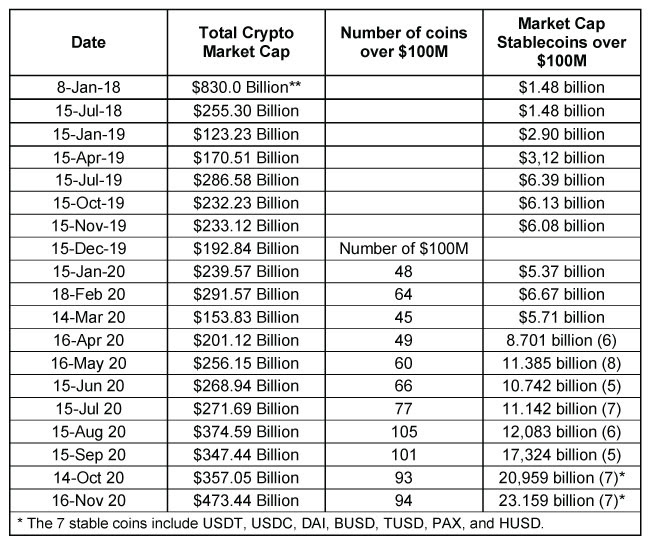 The following table tracks the market cap in relation to several other relative measures. Bitcoin’s percentage of total market cap had a significant jump in the last month. 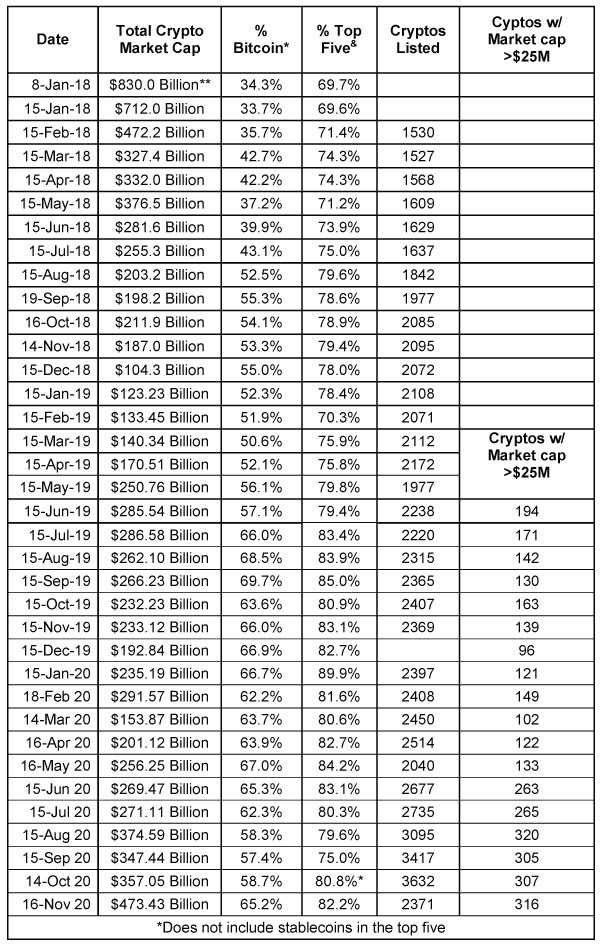 ** This was the peak of the crypto market in terms of market cap. Data via Tama Churchouse, Asia West Investor email on 4/11/18 & — Tether is not included in the top five as of September 20th.

As I mentioned in the Super Trader Crypto Systems Update Workshop, initial coin offerings were all the rage in 2017 until the SEC decided that cryptos were securities and ICOs were illegal. Now the new rage is Decentralized Finance and the new coins in the top 75 now include: Wrapped BTC (WBTC), AAVE, UNI, DAI, YFI, COMP, SNX, UMA, CEL, and SUSHI. I’m sure some of these coins will become buzz words in the near future.

I used to say that I only trusted the top 50-100 coins in the market cap list, however, many coins have fallen out of the top 100 list since June. Some of them didn’t fall far but others fell out of the top 500 list.

This month we are following 115 cryptos. Those include most of the top 75 cryptoassets in terms of market cap, but there are still some for which we cannot get data. 49 cryptos are neutral or stronger, whereas last month we had 85. Part of the difference is the market’s new emphasis on Decentralized Finance (DeFi). Most of those are now in the top 100 coins in market cap but are not yet part of our scans. Perhaps next month we’ll have enough data to include them. 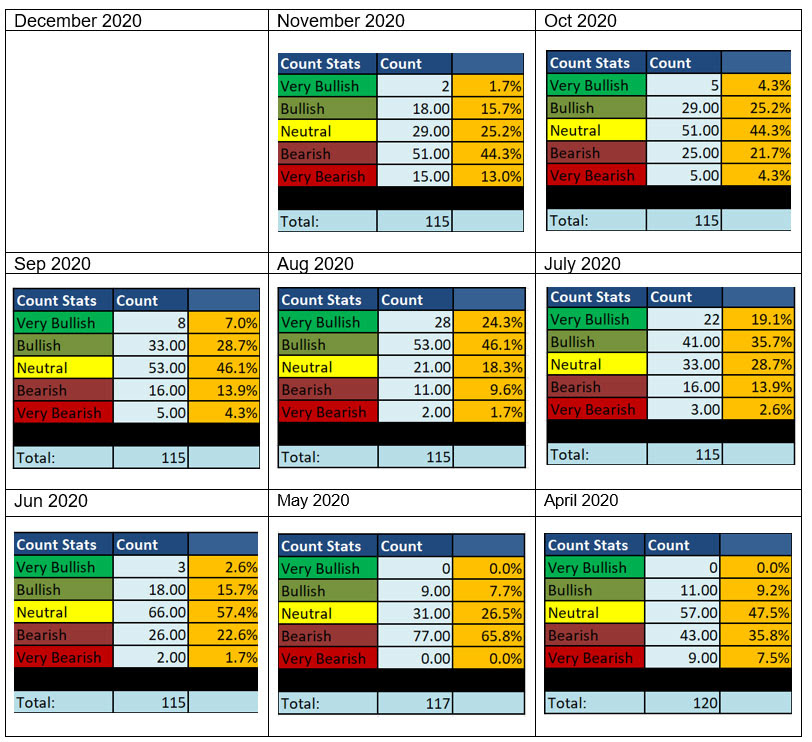 The eight tables above show the Market SQN® rankings of cryptos over the last 7 months. Last month we had 8 that were strong bull and another 33 that were bullish. In August 2020 we had 81 bullish cryptos. This month we have 3 strong bull cryptos and 18 bullish. Normally, I’d say the market is weakening, but in this case, the new DeFi coins are starting to dominate and we are not including them yet in our model. 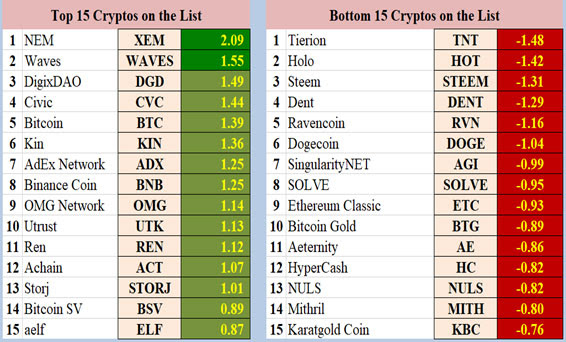 Binance’s coin, BNB, is said to be the most profitable coin (in terms of value earned for the company producing it rather than in price gains). It was up 130.56% last year and so far this year, 104.28%.

Ethereum, the number 2 market cap coin, doesn’t rank in the top 15 Market SQN scores, however, it is up more than BTC in 2020 – up 256%. Actually, I expect a huge increase in 2021 because ETH is the backbone of the DeFi movement. For example, a new coin in the top 100 in Market cap is Wrapped BTC. That coin is a BTC that’s been taken out of circulation and wrapped in an ERC 20 contract so that people can earn interest on it through Decentralized Finance sites.

One of my favorites coins is LINK, which is now at number 5 in market cap. It’s up 609.14% this year plus an additional 511.5% for 2019. LINK solves an important problem because each blockchain is its own universe. Getting information to and from the outside world is a problem because of trustworthiness. LINK solves that problem by getting information into and out of the blockchain while being secure, trustworthy, and decentralized. If you google Chainlink, you get the following quote.

“Chainlink has so much in the pipeline that at the current price and MC, it is not only a safe investment but is almost guaranteed to bring strong returns.”

I have no idea where this market is going, but my guess is that Cryptos will remain uncorrelated with the rest of the market and will be much higher by the end of the year.

Bitcoin News: BTC, got a big boost when PayPal announced that its customers will be able to buy, sell and use BTC. It’s probably the worst place to buy BTC because they will not only get the bid/asked spread (by giving you the worst of the two), and they plan to charge a 2.9% trade fee. My understanding, however, is that BTC purchases will be free until the end of 2020. I just went to my PayPal account, and nothing is mentioned about buying or selling or owning BTC.

IntoTheBlock can also show addresses in the money, out of the money, and at the money as is shown in the following future. It costs $100 for a pro subscription.

IntoTheBlock has a lot of interesting data. For example, at Bitcoin’s peak in 2018, there were 27.47 million BTC addresses. It’s currently 32.78 million up from 31.75 million last month. Active addresses amount to 2.94% of the total addresses. BTC is now held an average of 3.1 years.

IntoTheBlock defines a whale as owning 1% of the outstanding tokens and says there are no whales for BTC. The Winklevoss Twins must be close. And Grayscale and Binance must own a lot more than 1%.

Think about that. Out of 7.8 billion people on the planet, only 32.73 million own bitcoin and many of those could be addresses owned by the same people. For example, I have two Trezors with BTC addresses and another one on Coinbase. (And there may be some on old exchanges with a very small fractional amount). So, let’s say I am one of those with multiple addresses and that I have four of them. If most owners are like that, then perhaps only 8-12 million people own BTC in the world.

That shows you something about the upside potential. In 2018 at the high there were 27.51 million BTC addresses. And remember about 4 million BTC is stored someplace on the network and cannot be accessed. These include 1.1 million attributed to the inventor of BTC, Satoshi, those addresses where the keys have been lost, and those lost due to the death of an owner with no instructions given for recovery.

I like going to Cointelegraph.com for news. On November 16th, there was an article by Rakesh Upadhyay suggesting that above $16,700, where we are now, that the next resistance will be the old highs around $20,000, and then we’re probably looking at BTC with a trillion in market cap. That would be above $50,000 BTC.

BTC now has a Market SQN® score of 1.54 and is strong bull. The two charts below show the prices over the last year and since 2016. 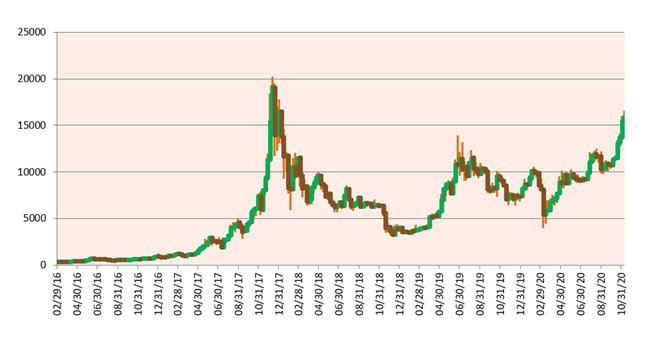 Ethereum (ETH): ETH is set to launch its Ethereum 2.0 upgrade later this year ending a long streak of delays. It will start moving a proof of stake model (vs. its current proof of work). That means the old miners of ETH will have to shift because their equipment will be obsolete. ETH resistance right now is $488.134. If it goes above this level, then it could go to $520 and then to $550.

Trading Ethereum Classic (ETC) is still dangerous because of the 51% attacks against its network. I no longer own any ETC.

This newsletter makes no recommendations to buy or sell any cryptoasset but is a free service to the VTI community. I personally own positions in many of the cryptos mentioned in this newsletter and the Van Tharp Institute has a position in GBTC (Grayscale Bitcoin trust).