PLEASE NOTE: This update was written over the weekend on May 15th and 16th. Since then, cryptos went through a blood bath Tuesday night. Our models use closing price data so I did not re-run the numbers because the spreadsheets would not be able to reflect the big drop until tonight’s close. While I don’t have closing data for today yet, it’s obviously going to be pretty bad for cryptos.

The BTC exit does not signal the end of the opportunity of a lifetime because now the altcoins are starting to move. Here is a list of the top 10 coins in market cap (excluding the stable coin Tether) in terms of gains in 2020 and 2021. This is not a recommended list of cryptos but if this is the top 10 in terms of market cap, what does it tell you about the market? Everything is up for 2021 and most of the coins are up from last month.

I added the third column that shows the large drop as of 9:30 EDT on May 19th. America is just starting to notice, so expect more carnage. 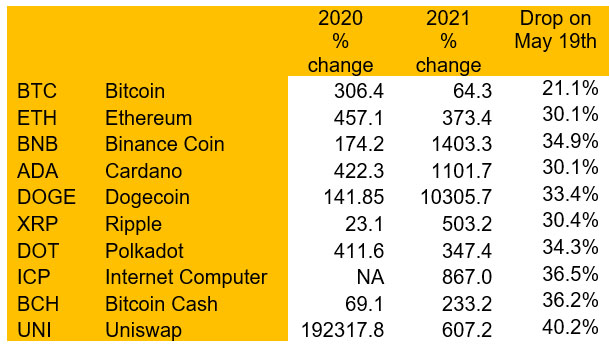 Last month, XRP was the only coin that had a gain of less than 100% this year (because of the SEC lawsuit against them) but now it’s up 503% on the year. BTC is the only coin in the top 10 up less than 100% this year, however, I wrote this article prior to the huge drop on Tuesday night. (At the end of the article, I added an update Wednesday morning).

We currently have VTI crypto positions for new Super Traders. Why are we doing this? Two reasons: 1) My strong belief that this is probably the investment opportunity of my lifetime and 2) We can make a lot of money and share it with our clients. We actually believe that sharing the gains and taking all the risk increases our chances of making huge returns.

The positions are up nicely but it’s not because I’m a genius crypto picker. It is because of my belief that cryptos are an institutional revolution and because of my overall rules for setting up a portfolio. We bought $850,000 in cryptos and since mid-April, we had a drawdown of almost $100K, a sharp recovery, and then a slightly choppy downward movement. When BTC looked like a sure thing to get stopped out (which then did happen), I also exited all positions that were down on the year. But on May 19th we are below our entry prices so I will be exiting everything. No one will earn any credit as a result of this latest move but VTI will be taking the loss. 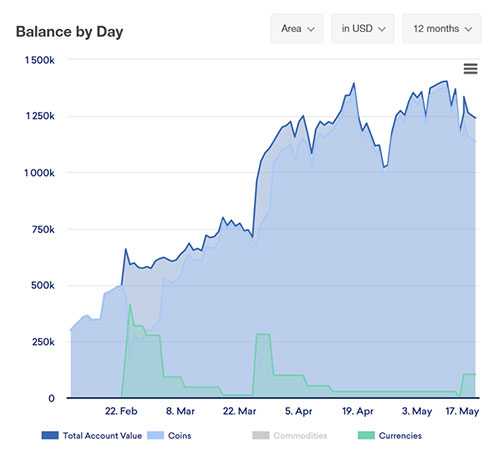 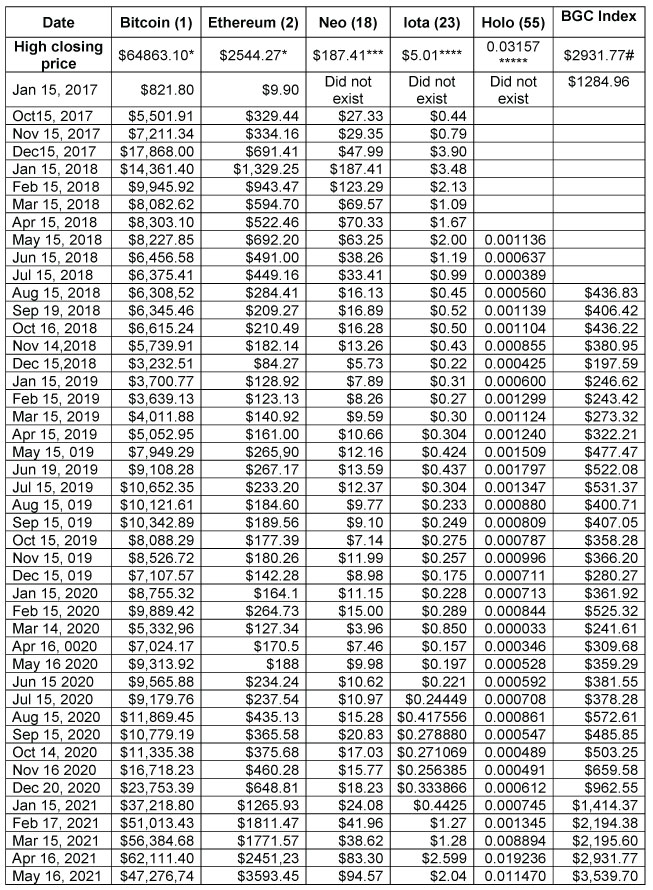 The chart below shows the Bloomberg Galaxy Crypto Index from last weekend. Does the chart suggest that we are in a bear market to you or that cryptos are in danger? 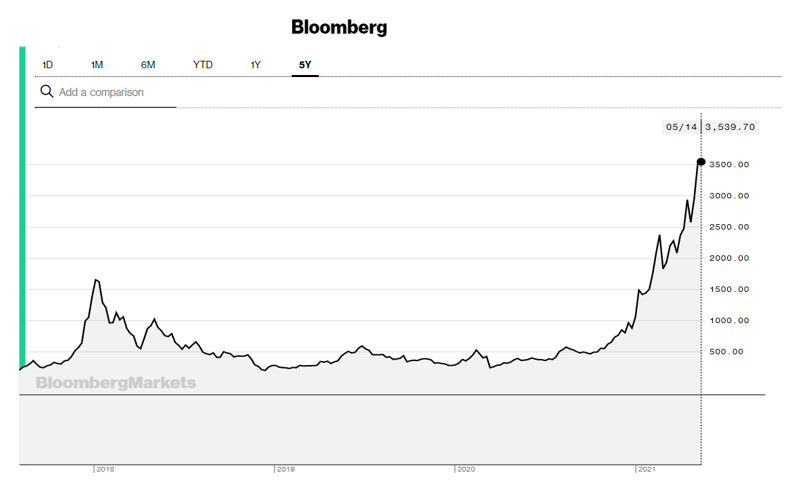 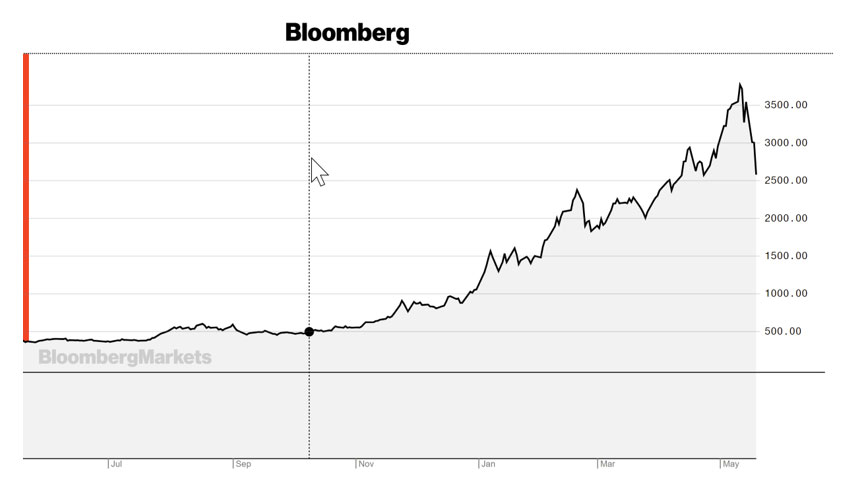 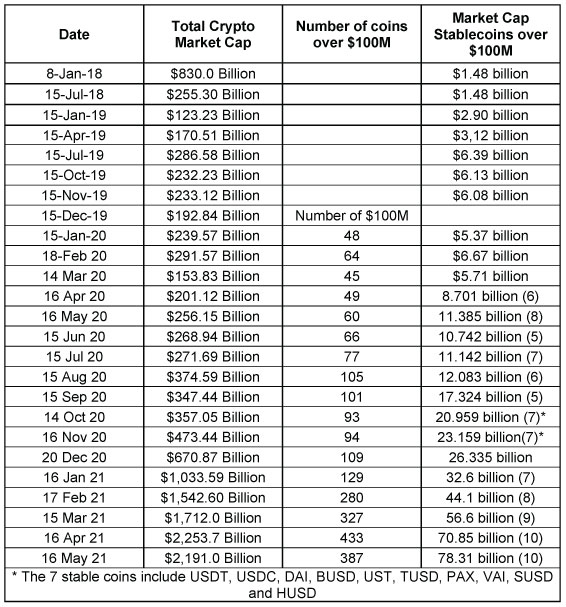 Since last month, the crypto market cap is down $62.7M to just under $2.2 trillion. And we have about $8B more of stablecoin cap. Note: At 9:50 am EDT the market cap was down to $1.6 trillion. I think this might be the single biggest one-day decline I’ve seen in cryptos since I’ve been following them. 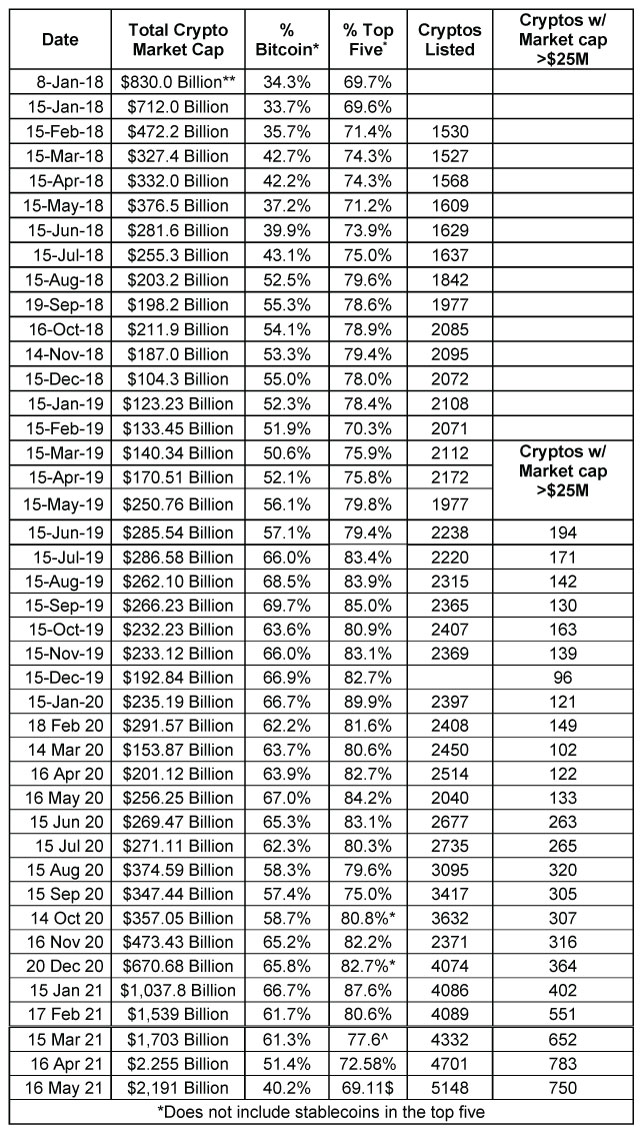 * Bitcoin was as high as 90% of the market cap of all cryptos at the beginning of 2017 to as low as 32% at the top of the market. Part of the difference is that there are now nearly 9,842 cryptocurrencies and the number keeps going up. BTC is down to 40% dominance and ETH is now up to 19.2%.

As I have mentioned previously, initial coin offerings were all the rage in 2017 until the SEC decided that cryptos were securities and ICOs were illegal. Now, the new rage is Decentralized Finance and this group includes these new coins in the top 75: Wrapped BTC (WBTC), AAVE, UNI, DAI, YFI, COMP, SNX, UMA, CEL, LRC, and SUSHI. I’m sure some of these coins will become buzz words in the near future.

We are now following 242 coins in our crypto model. There are only 7 cryptos in bear territory and another 23 that are neutral. Most of the neutrals are stablecoins. 87% is in very bullish or bullish mode, the market is dominated by the bulls. Note: This data was from May 15th before the big drop on May 19th. 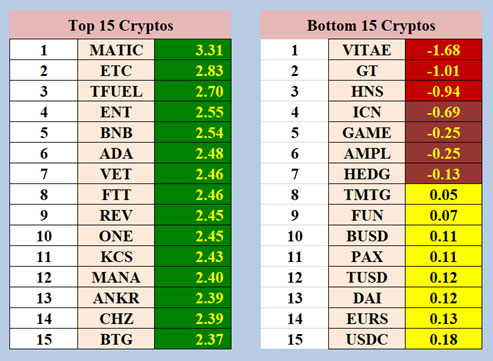 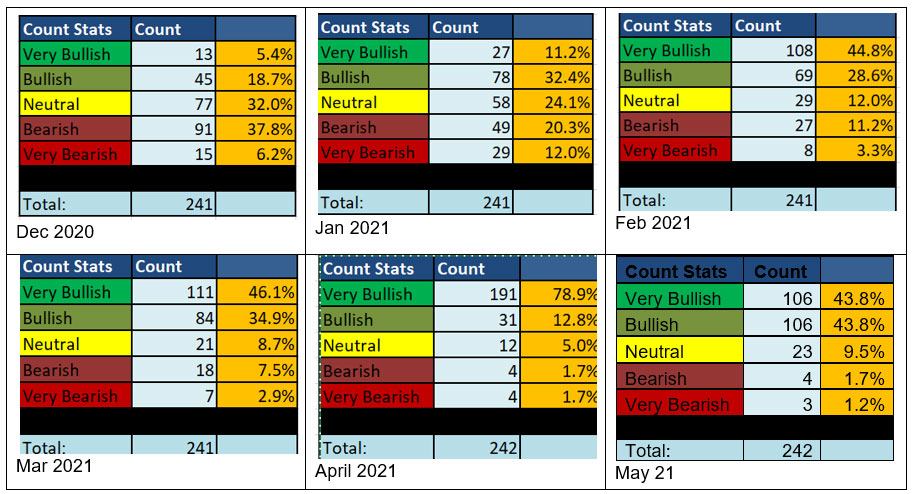 By the way, I personally think that DOGE is probably one of the worst cryptos even though it is currently ranked #5 in market cap. It was formed as a joke, so at least it’s not a Ponzi scheme. DOGE is based upon a meme and has no reason to have any value except that young people think it’s real and important. If you talk to most people in their 20s, DOGE is the only crypto they own because it’s all over social media.

Elon Musk might be brilliant at owning tech companies but he certainly isn’t an authority on investing in other people’s companies. He’s been talking and joking about DOGE lately but I recently learned that he has been working with the DOGE developers since 2019. Could that be more joking? Either way, I don’t trust people who get sued (repeatedly) for tweets that impact the price of their company’s stock (Tesla). Tesla stopped accepting BTC as payment for their cars. It will still keep its large BTC investment even though it burns a lot of electricity. Musk is accepting DOGE payment for his space X project but DOGE is also a proof of work coin that burns a lot of energy too.

The data below shows the top-performing cryptos of those we track. Top performing, in this case, means gaining over 1,000% since the start of 2021 and in mid-May, we have 17 coins on the list. We discussed some of these at the Super Trader Crypto Workshop on May 10th. 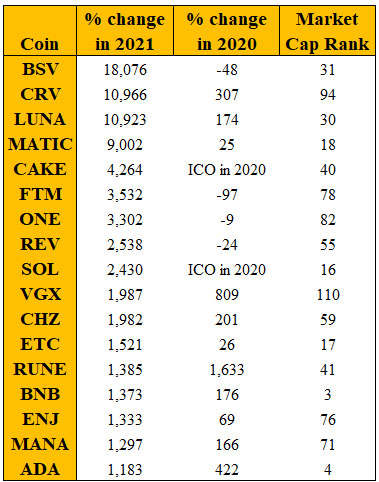 People talk about BTC being volatile and risky. But where can you find something that has made over 1,000% in 3 of the last 12 years, over 100% in 7 of those years, and had only two losing years? There is only one other asset class besides BTC with anywhere near equal performance – other cryptoassets. And despite the bloodbath on May 19th, BTC is still up in 2021.

Gold was not a path to safety during the pandemic and is not one now either even with Biden as president and the probability of more massive government spending. The gold price certainly doesn’t reflect a big devaluation of the dollar that some newsletters are promoting. Many people cling to the belief that gold is the asset to hold to preserve value but that may no longer be the case now that the world has a new form of money/value. Thousands of years ago, some cultures used seashells as a representation of money/value.

Even though cryptos are now worth over two trillion, gold still has about 10 times more market cap. If all the money in gold went into BTC, BTC’s price would be about $370,000.

Finally, here is a chart showing the price of BTC since 2016. 2017 used to look like a huge gain but look how that runup compares with the current price.

Cryptocurrency News (PLEASE NOTE: This has not been updated to reflect the May 19th drop.)

This newsletter does not make recommendations but is a free service to the VTI community. I state some of my beliefs about crypto assets in this article, but that doesn’t mean that I’m recommending anyone do what I’m doing. I personally own positions in most of the cryptos and crypto trusts mentioned in this newsletter. In addition, I have about $1.2M worth of cryptocurrencies representing many of those in the top 100 in market cap and probably nearly everything mentioned in this newsletter.

Until mid-June, when we’ll do our next crypto update, this is Van Tharp.

The big question right now is what some of the major institutional holders of BTC are doing. Tesla had $1.5 billion but that’s probably worth less than a billion now. And how about MSTR?

I think this move now qualifies as a bear market, however, these reactions in a bull market have been known to last only a few months until a full recovery. Is this a mini bear or is there strong institutional pressure to sell and make it a full-blown bear market? What does your system tell you to do? Our ST systems pretty much suggest that once we get a BTC exit, which we did on May 15, we should either exit all altcoins or at least exit all weak altcoins. Almost all of the altcoins are weak now.

VTI crypto account: We will exit all positions today.

Van’s personal crypto account: I had already exited enough of my positions to recoup the full amount of my original position size in cryptos. Some positions, however, were almost impossible to get out of because of the cost of moving ERC20 coins but I will be exiting about 1/4th of my total positions by the end of the week.

Overall: If this is a short-lived reaction, then it’s a tremendous opportunity. My original belief was that the bull market would run for at least 18 months after the most recent halving (mid-2020) which should still take us to the end of the year.