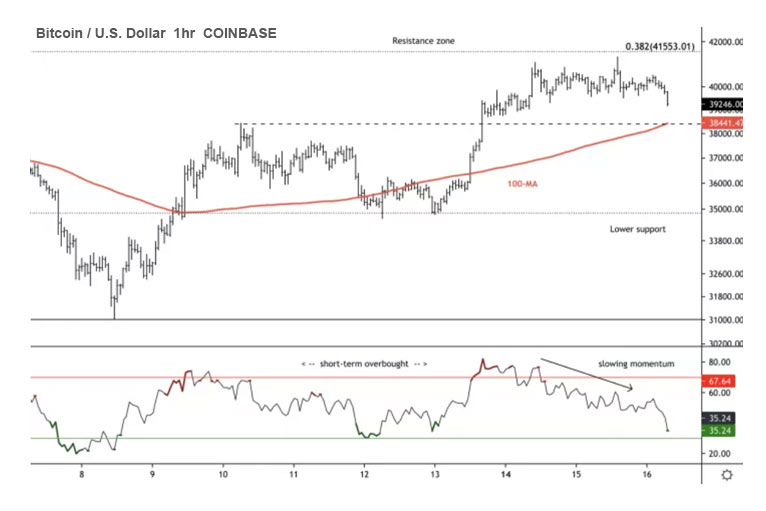 On May 15th I said, “I think that there are a number of altcoins that could go up 10 times or more during the rest of 2021. Now we might have a decline of 40% or more during the year, but it probably will be short-lived with a very quick recovery.” Well, we’ve had the drop and the main question now is whether we should we stay on the sideline, or are there more fast gains ahead of us? 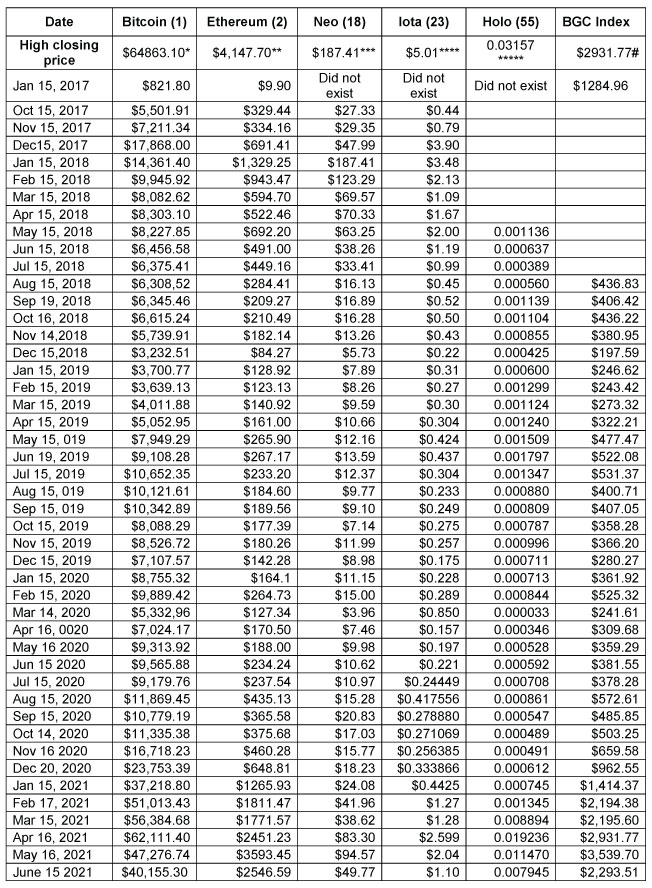 Notice that nothing is up from last month and NEO, IOTA, and HOT are all down about 40-50%.
The chart below shows the Bloomberg Galaxy Crypto Index. Does that chart suggest that we are in a bear market to you or that cryptos are in danger? Around May 15th, the crypto market looked strong. Four days later on May 19th, a bloodbath (probably short-term) was clearly starting and the chart below shows the results on June 15th. 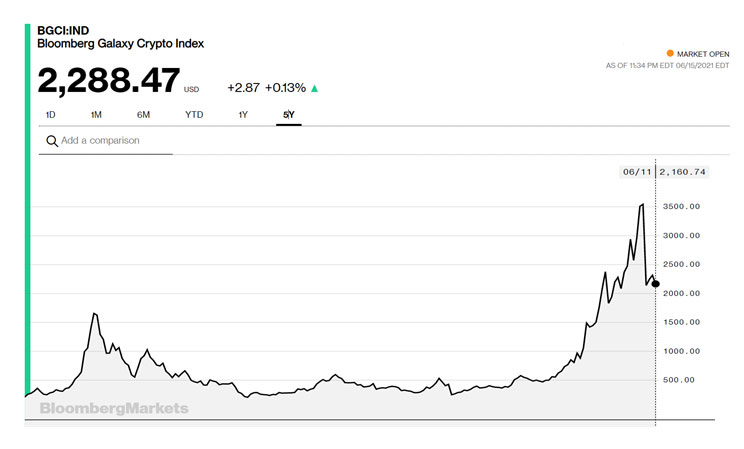 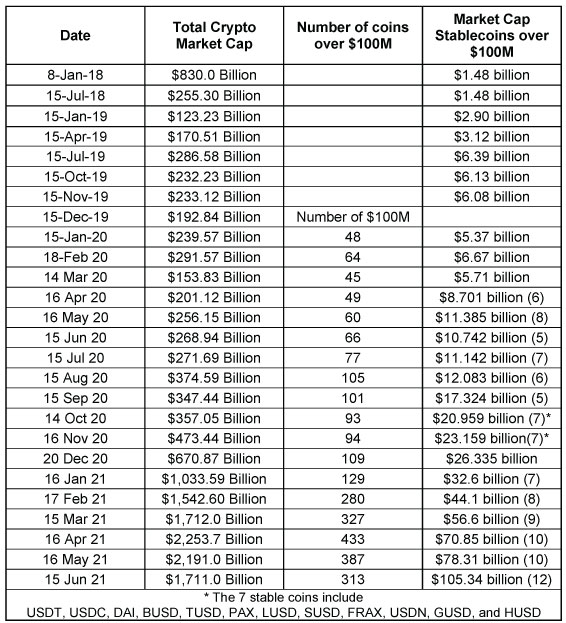 Since last month, the crypto market cap is down $480B to just over $1.7 Trillion. We also have about $25B more of stablecoin cap. 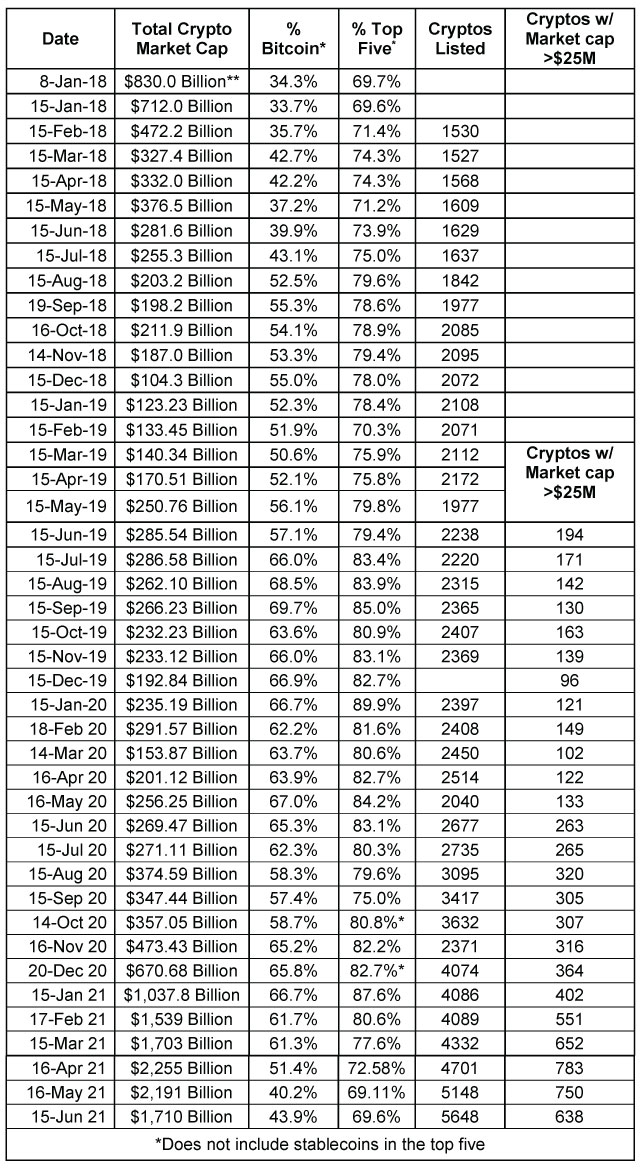 *Bitcoin was as high as 90% of the market cap of all cryptos at the beginning of 2017 to as low as 32% at the top of the market. Part of the difference is that there are now nearly 10,000 cryptocurrencies and the number keeps going up. BTC is down to 44% dominance and ETH is now up to 17.6%.

As I have mentioned previously, initial coin offerings (ICOs) were all the rage in 2017 until the SEC decided that cryptos were securities and ICOs were illegal. The new rage now is Decentralized Finance (DeFi) and this group includes these new coins in the top 75: Wrapped BTC (WBTC), AAVE, UNI, DAI, YFI, COMP, SNX, UMA, CEL, LRC, and SUSHI. I’m sure some of these coins will become buzzwords in the near future. 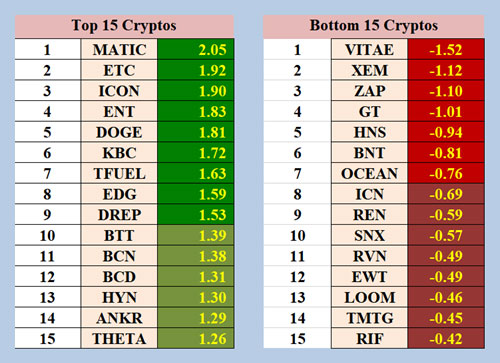 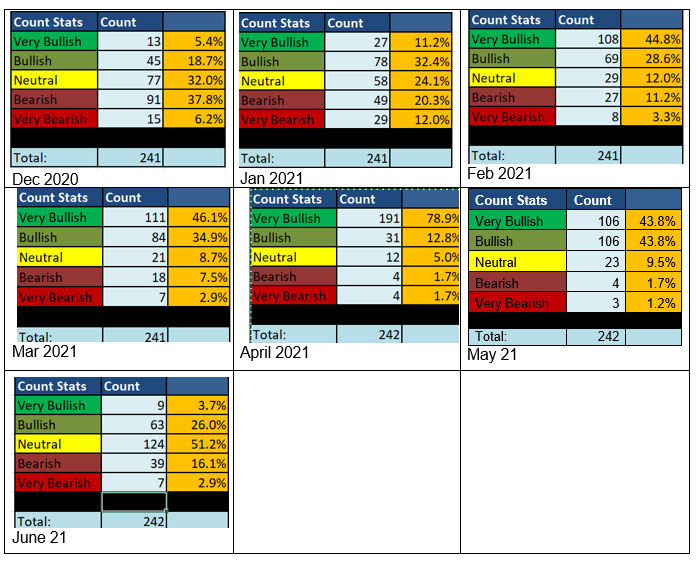 The data below shows the top-performing cryptos of those we track. Top performing, in this case, means gaining over 1,000% since the start of 2021. The table below shows a comparison between this month and last month. I didn’t include DOGE last month because it’s a dangerous coin. Notice that some of the coins from last month are no longer up by 1,000%. 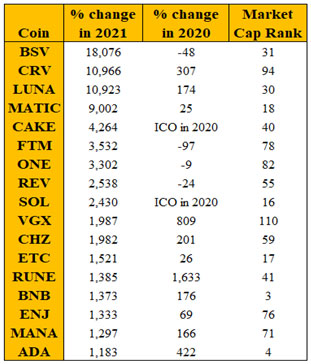 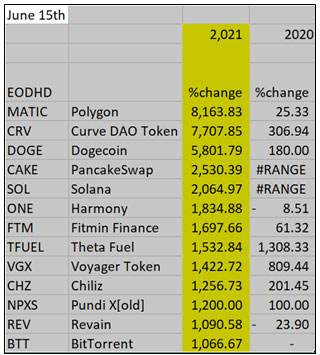 People talk about BTC being volatile and risky. Maybe, but where else can you find something that has made over 1,000% in 3 of the last 12 years, over 100% in 7 of those years, and had only two losing years? There is only one other asset class besides BTC with anywhere near equal performance – other cryptoassets. And despite the bloodbath on May 19th, cryptos are still up in 2021.

Gold was not a path to safety during the pandemic and is not one now either even with Biden and the probability of more massive government spending. The gold price certainly doesn’t reflect a big devaluation of the dollar as some newsletters are promoting. Many people cling to the belief that gold is the asset to hold to preserve value but that may no longer be the case now that the world has a new form of money/value. Even though cryptos are now worth about $1.7 trillion, gold still has about 10 times more market cap. If all of the money in gold went into BTC, BTC’s price would be about $370,000.

Finally, here is a chart showing the price of BTC since 2016. The year 2018 used to look like a huge gain but look how that runup compares with the current price.

I think the biggest news recently is that El Salvador has voted to make BTC the legal currency of the country – and that’s a first. BTC gains will not be subject to capital gains in that country.

An Update on Non-Fungible Tokens (NFTs)

Non-fungible means that you cannot trade something for itself. For example, Leonardo DaVinci’s Mona Lisa painting is non-fungible—you can’t trade it for another Mona Lisa.

NFTs or non-fungible tokens are blockchain-minted artworks with unique encryption codes which allow for verified authenticity and ownership. An NFT can represent anything from a digital art piece to a song or cartoon, sports card, or a whole album. Even fashion designers are getting in on the NFT craze.

More than 509,000 NFT artworks were sold in March 2021 alone, totaling more than $85 million in sales so it’s kind of a big deal. If you want, you could draw a stickman on a sticky note, take a picture of it and upload the jpeg as an NFT. 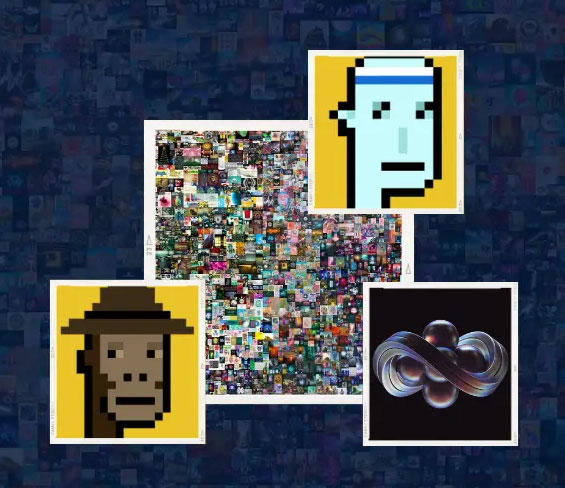 The image shows some of the-top selling NFTs so far. The one in the background that looks like a lot of dots sold for almost $70 million. An artist named Beeble – who was a totally unknown person a year ago – created that piece.

Elon Musk’s girlfriend, Grimes, a Canadian musician, singer, songwriter, and record producer learned about NFTs recently. As a result, she promoted one on Twitter and then made $6 million selling it in about 20 minutes.

Here’s a list of 15 NFT developers who have sold over $5 million in NFTs (from https://gothammag.com/top-selling-nft-artists):

To make an NFT, you simply have to create something unique and upload it to a site such as Rarable, OpenSea, or Mintable. As I said, you could draw a stick man on a sticky note, take a photo of it and then upload the photo to one of these sites and you have your first NFT. But good luck selling it.

To me, NFTs sound crazy. I’d rather own a tulip bulb or a beanie baby, however, for those of you looking for infinite wealth, study the field a little bit and perhaps you can start selling NFTs for $5,000 each.

This is a free newsletter to the VTI community. It makes no recommendations to buy or sell anything. Instead, it’s educational and about understanding how money is made.

My beliefs are that ETH could reach a trillion in market cap as soon as it becomes a Proof of Stake token and the costs of moving it go down substantially. After all, it’s the backbone of the Decentralized Finance Movement.

In addition, BTC will be going through a major upgrade later this year which will turn it from a 1st generation cryptocurrency to a 2nd generation with the addition of smart contracts. That should also be huge.

Both the BTC and ETH upgrades happen this year.