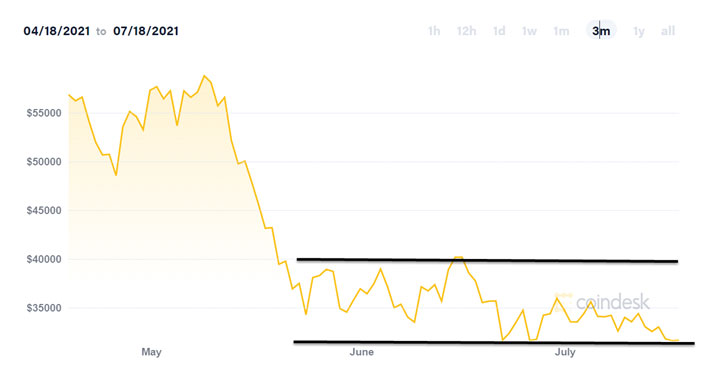 Thus, we are either due for more of the same or it will eventually move out of the band and again test $50,000.

Well, we’ve had that kind of drop and now the question is 1) should you be on the sideline or 2) are more fast gains ahead of us? As you’ll see in the rest of this report, the answer is that most likely nothing will happen until BTC takes off again.

The table below tracks the price of five major cryptoassets across three generations of the technology along with Bloomberg’s index: 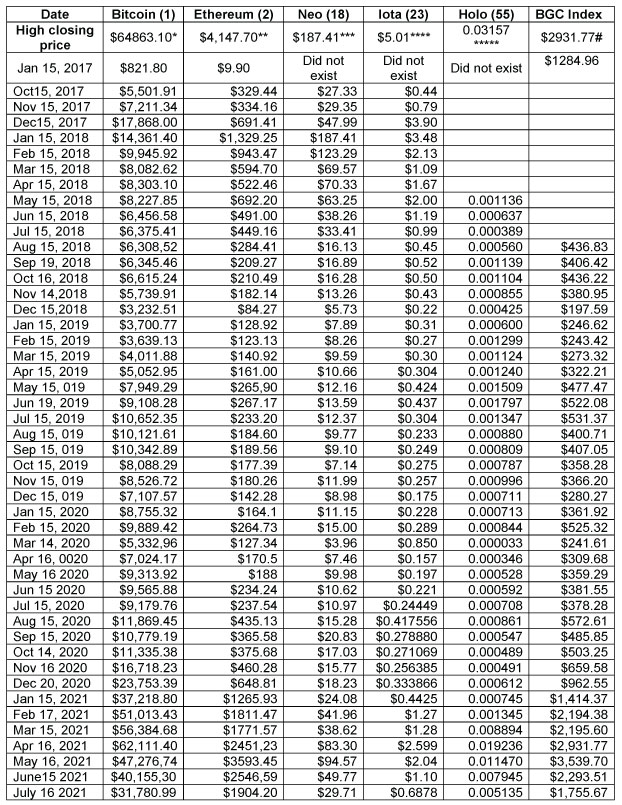 Notice that nothing is up from last month and NEO, IOTA, and HOT are all down about 40-50%.

The chart below shows the Bloomberg Galaxy Crypto Index. Does the chart suggest to you that we are in a bear market or that cryptos are in danger? Around May 15th the crypto market looked strong. By May 19th, four days later, a bloodbath had started. The latest result on the chart below clearly shows it. 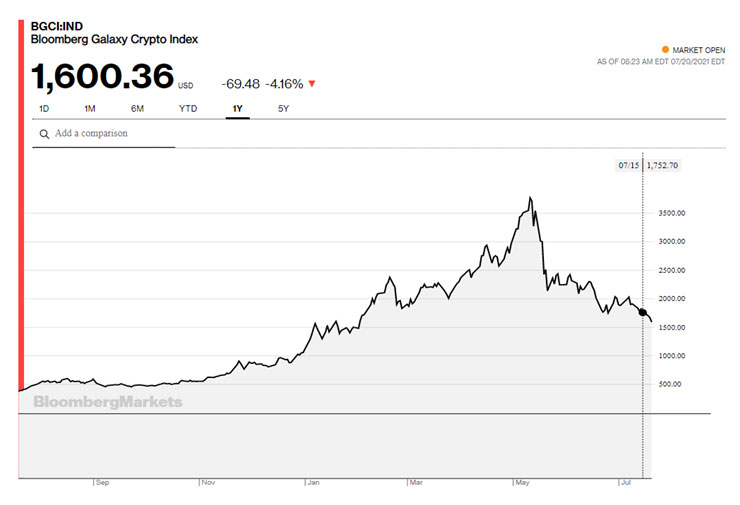 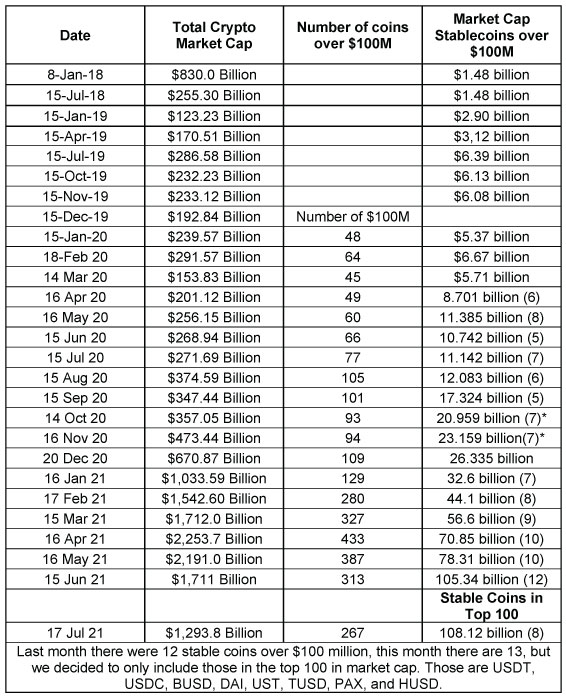 Since last month, the crypto market cap is down $417 billion to just under $1.3 trillion. And, despite only using those stable coins in the top 100 we have $3 billion more there. 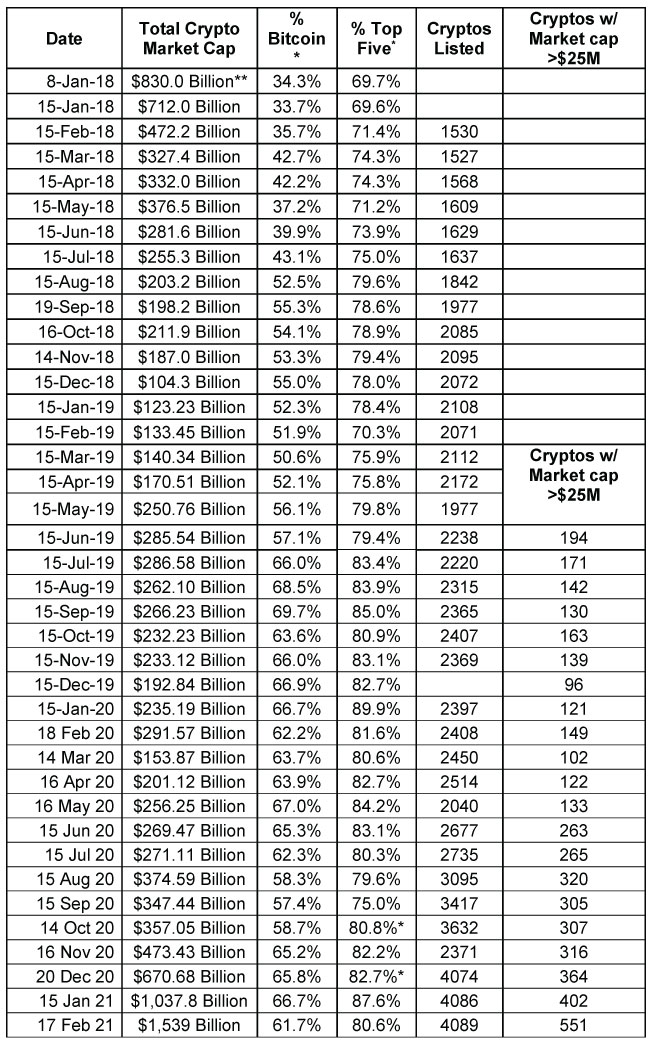 * Bitcoin was as high as 90% of the market cap of all cryptos at the beginning of 2017 to as low as 32% at the top of the market. Part of the difference is that there are now over 10,000 cryptocurrencies (but more than half are not on exchanges and don’t have a market cap) and the number keeps going up. BTC is up to 45% dominance and ETH is now up to 17.2%.

As I have mentioned previously, initial coin offerings were all the rage in 2017 until the SEC decided that cryptos were securities and ICOs were illegal. The new rage now is Decentralized Finance and this group includes these new coins in the top 75: Wrapped BTC (WBTC), AAVE, UNI, DAI, YFI, COMP, SNX, UMA, CEL, LRC, and SUSHI. I’m sure some of these coins will become buzzwords in the near future[1].

We now follow 229 coins in our crypto model. Twenty cryptos are currently in bear territory and another 40 cryptos are neutral. The remaining 169 are bearish. In April and early May, over 200 coins were bullish.

One of my favorite coins, CND, is now low enough that you can get all of the coin’s predictions for under $10,000. I believe CND has huge upside potential but who knows, it might go down more. 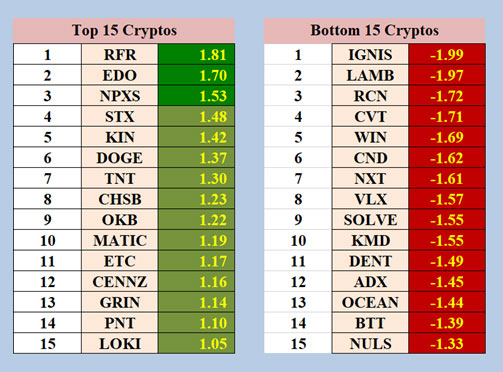 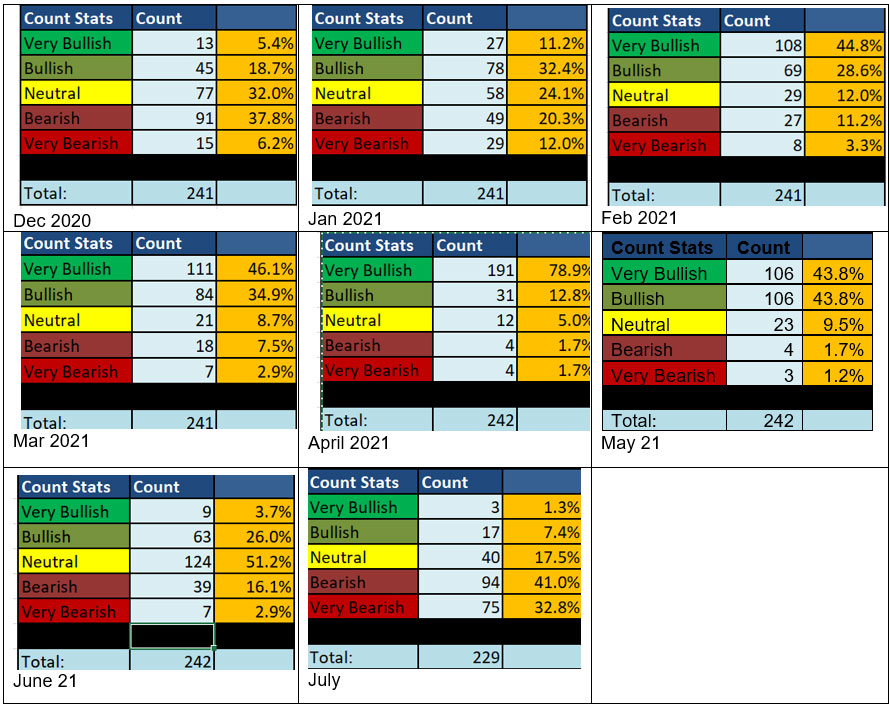 The next data show the top-performing cryptos of those we track. In this case, top-performing means gaining over 1,000% since the start of 2021. The table below shows a comparison between this month and last month. I didn’t include DOGE last month because it’s a dangerous coin. Notice that some of the coins from last month are no longer up by 1,000%.

People talk about BTC being volatile and risky. Where can you find something that has made over 1,000% in 3 of the last 12 years, over 100% in 7 of those years, and had only two losing years? There is only one other asset class besides BTC with anywhere near equal performance – other cryptoassets. Despite the bloodbath starting on May 19th, BTC is still up in 2021.

Here are what some with investing savvy are saying now about cryptos and BTC.

This is a free newsletter to the VTI community. It makes no recommendations to buy or sell anything. Instead, it is educational and about understanding how money is made.

The two leading cryptos each have one major change happening this year:

If BTC continues to go down from $30,000, I’d expect that by the end of the bear market, big institutions will own a major share of BTC, ETH, and many of the upcoming new crypto assets.

I personally hold positions in some of the cryptos mentioned in this article.