Note: This month’s update is coming out a little later than other months because we wanted to add more coins to follow. We are now following 241 coins vs. only 115 last month. These include most of the top 200 cryptoassets in terms of market cap but there are still some for which we cannot get data. 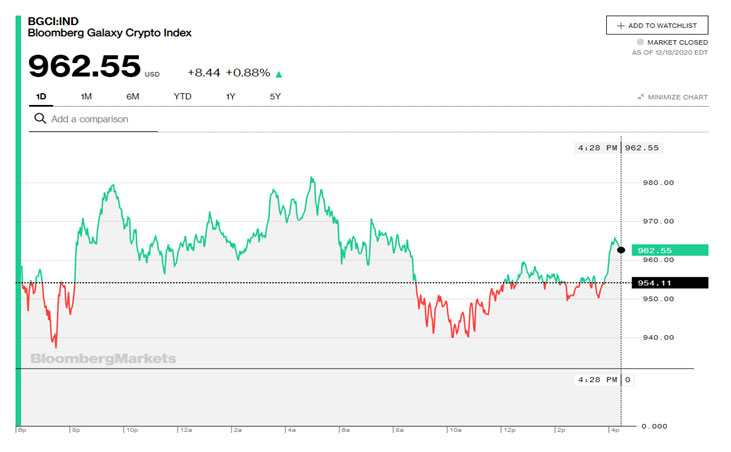 The most recent BTC halving took place on Monday, May 11th. Now BTC miners as a whole produce 6.25 BTC every ten minutes — down from 12.50 before the May halving. Prior to that, mining a Bitcoin cost about $6,851 so when BTC was above that price, miners made a profit. Mining a single BTC costs an estimated $12,000 to $14,000 and now that BTC is over $23K, the miners should be doing very well. At the same time, however, BTC’s high price has attracted more mining competition so the cost to mine may increase significantly since each miner will earn less.

We started our GBTC offer in July when BTC was about $9,200 and now it’s $23,753. That’s about a 158% gain but we took half of our GBTC position off recently because we expect the premium to go down to perhaps zero in January. In January, accredited investors who put BTC into GBTC can now get out of GBTC for the 1st time – one new group every week. That could mean a lot of selling which would be neutral to bearish for GBTC but if they put their money back into BTC, that will be bullish for BTC. If they just sell GBTC, then it’s neutral for BTC and bearish for GBTC.

One of my goals with the GBTC money that we exited was to invest in BTC and buy puts as a hedge. But right now the CME only does short-term puts which makes that hedge rather expensive.

Cryptoasset exchanges are still the wild, wild west with basically unregulated markets, lots of market manipulation, and now 100 to 1 leverage in some cases. This is why you shouldn’t invest anything more than you can afford to lose. Say at most 10% of your liquid net value and 2-5% is better. Cryptos will probably continue to be the wild west until we see a multi-trillion-dollar market cap and a much more regulated market. Who knows what the nature of the market will be once that happens.

The last day of our recent How Big Money Trades workshop focused on cryptoassets. I gained a lot of insights by listening to some experts that day. First, the OTC market is at least as big as the exchange markets – with between 40-60% of the total volume of cryptos. If you are a whale, you can go to the OTC market and find another whale and instantly sell/buy 25,000 BTC. Most exchanges put limits on trading sizes which makes large transactions difficult.

I also learned that most miners are pretty sophisticated traders and while some would like a nice bull market in BTC, others do not want one at all. The reason being that a bull market would encourage a lot of new people to enter into the crypto mining game and they’d prefer less competition. 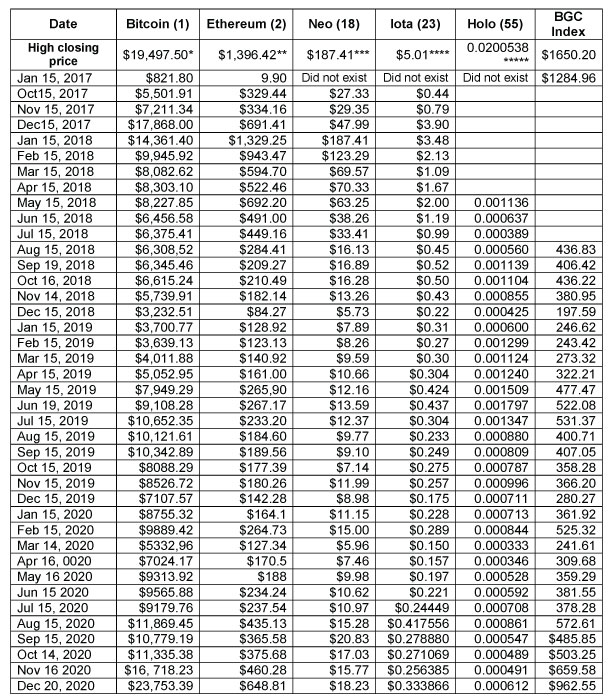 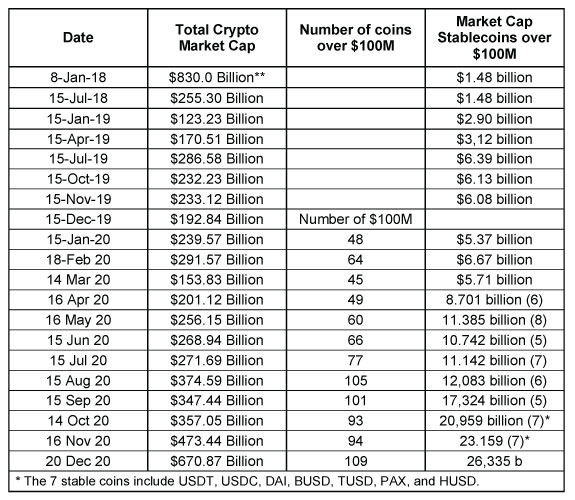 Since last month we had about a $2 billion gain in the market cap of stablecoins over $100 billion. 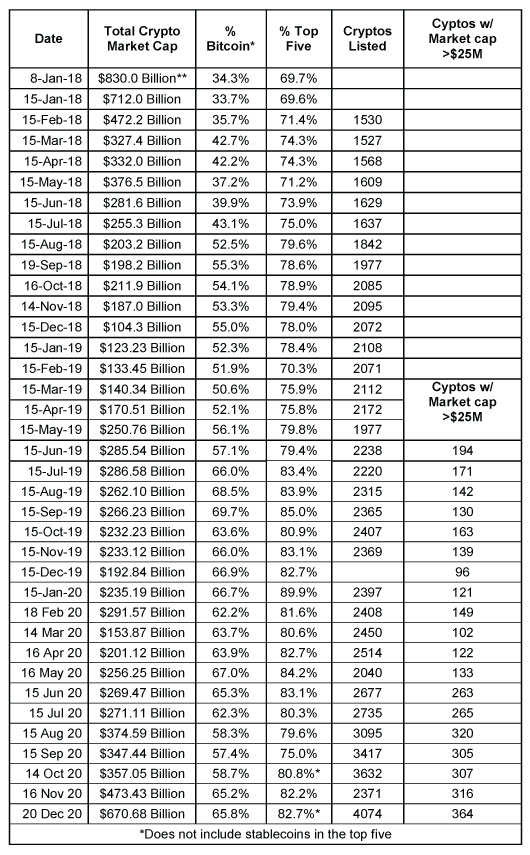 * Bitcoin was as high as 90% of the market cap of all cryptos at the beginning of 2017 to as low as 32% at the top of the market. Part of the difference is that there are now nearly 2000 cryptocurrencies. So the number keeps going up even though the market cap goes down. ** This was the peak of the crypto market in terms of market cap. Data via Tama Churchouse, Asia West Investor email on 4/11/18 & — Tether is not included in the top 5 as of Sep 20

Some interesting changes this month. This month Coin Market Cap listed 364 coins with a market cap of $25M and six months ago there were 133 coins with a market cap above $25 million. In the last two months, there were HUGE changes in the higher cap cryptos with BTC up over 100% and ETH up almost 100%. The smaller cryptos we track in the table, however, are not doing nearly as well.

As I mentioned to the Super Traders in their Crypto Systems Workshop last month, initial coin offerings were all the rage in 2017 until the SEC decided that cryptos were securities and ICOs were illegal. Now the new rage is Decentralized Finance. New DeFi coins in the top 75 now include; Wrapped BTC (WBTC), AAVE, UNI, DAI, YFI, COMP, SNX, UMA, CEL, and SUSHI. I’m sure some of these coins will become buzz words in the near future.

For more than a year, I have been showing the top 115 coins in our analysis and showing the last few months of results in the figure below. Now that we are tracking almost double that, you can see the big difference in numbers so I’m starting new.

The chart below shows the 15 top and 15 bottom cryptoassets. The top coin is suddenly BTC with the highest Market SQN score I’ve ever seen for it. If we hadn’t gotten out of half of our positions recently, seeing BTC at 3.04 would be enough to get me to start scaling out. Whenever we see an insane number, it usually drops big time the next month. However, NEM (XEM) continues to rank near the top and it’s been there for some time. It’s up 330% in 2020. It’s up about 823% over the last 100 days.

People talk about BTC being volatile and risky but where can you find anything that has made:

If you had bought BTC at the beginning of 2012, you would have turned $1,000 into over $4.5 million. Our Super Trader BTC system has outperformed buy and hold and has only three losing trades. It entered BTC last on May 6th at $9,156.06 and is currently up 160%. You might be saying, but then why did you get out of half of your GBTC position? GBTC is different from BTC because its premium over BTC can change and it could very well go to zero in January. If BTC were to stay flat and the GBTC premium does disappear, then GBTC holders would experience a 25% drop.

Ethereum, the number 2 market cap coin, didn’t rank in the top 15 last month but it is now #9 with a Market SQN® score of 1.71. It was down 3% in 2019 but it is up 398% so far in 2020. I’d expect it to do better than BTC in 2021 since it is the backbone of the DeFi movement. For example, one new coin in the top 100 by market cap is Wrapped BTC. This crypto is a Bitcoin that’s been taken out of circulation and wrapped in an ERC 20 contract so that people can earn interest on it through Decentralized Finance sites. In addition, a new format for ETH is coming soon which should make it a really strong performer.

We actually had 11 coins that were up over 600% over the last 180 days. I have only started tracking this data and I only own one coin in the list SNX.

Finally, our last list has coins that are up the most over the last 30 days. I get this from cryoptracking.info. They track my cryptos and it’s the only place I’ve seen 30-day rates of change. The top 10 are given in the following table along with BTC as a reference. 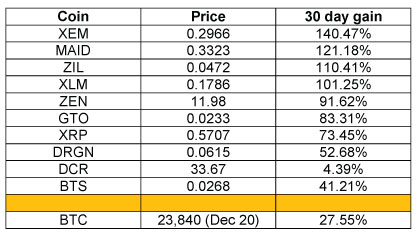 This newsletter is not designed to make recommendations but is a free service to the VTI community. I personally own positions in many of the cryptos mentioned in this newsletter. Our primary positions are in GBTC (Grayscale Bitcoin trust) which we recommended for our Super Traders in July.

Flash News: The Securities and Exchange Commission has decided to sue the cryptocurrency Ripple (XRP) on the grounds that it is a security rather than a coin. This is despite it being recognized as a coin in every other country in the world and despite it being recognized as a coin since its inception in the US. For example, Ripple was one of the few initial coins sold by Coinbase (a US exchange) when it first started.

We don’t know what is happening here and the SEC chairman plans to step down at the end of the year rather than run out his full term. We don’t know if this is a last minute effort by Trump (and perhaps some central banks) that will be stopped by the new administration or something else entirely. However, Ripple is expected to defend itself and to move out of the US if it looks like they will lose the lawsuit.

The SEC stance on Ripple could impact other prominent cryptoassets like BTC and ETH in the near future, so this statement is issued as a warning.