BTC hit a new all-time high of $64,863.10 on March 13. Since then, it has been much lower but recently it broke out of a channel and made some significant gains. The following chart shows that quite clearly. Will it test $50K again soon?

Well, we’ve had that drop so now the question is 1) should you be on the sidelines or 2) are more fast gains ahead of us? The answer, as you’ll see in the rest of this report, is probably that nothing will happen until BTC takes off again. While BTC and some of the altcoins are moving, none are moving rapidly.

The table below tracks the price of five major cryptoassets across three generations of the technology, now along with Bloomberg’s index: 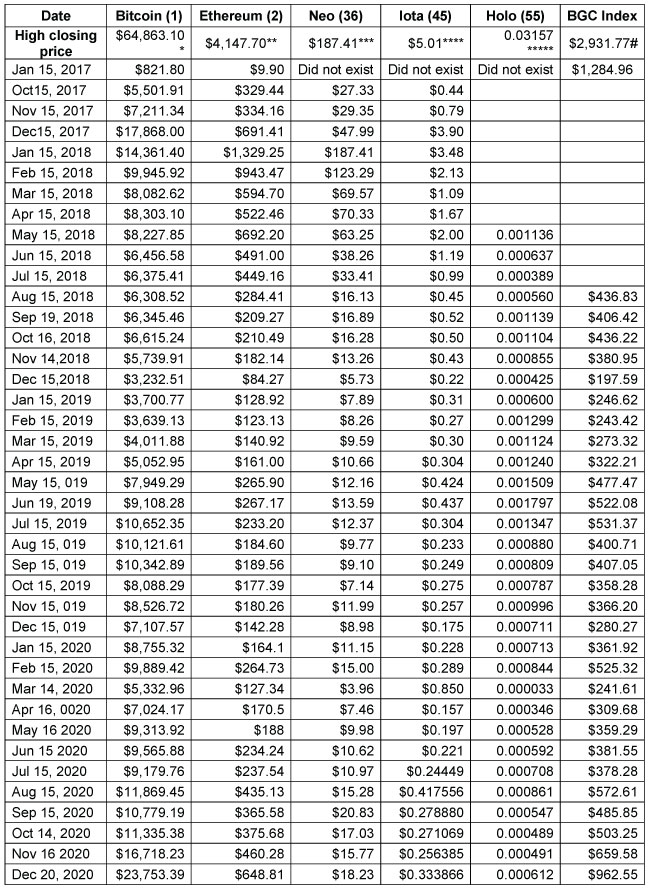 Notice the huge gains in everything over the last month.

The chart below shows the Bloomberg Galaxy Crypto Index. Does that chart suggest to you that we are in a bear market or that cryptos are in danger? Before May 15th the crypto market looked strong but four days later, the start of a bloodbath was clear – as you can see in the chart below. The chart also clearly shows that we are in a recovery. 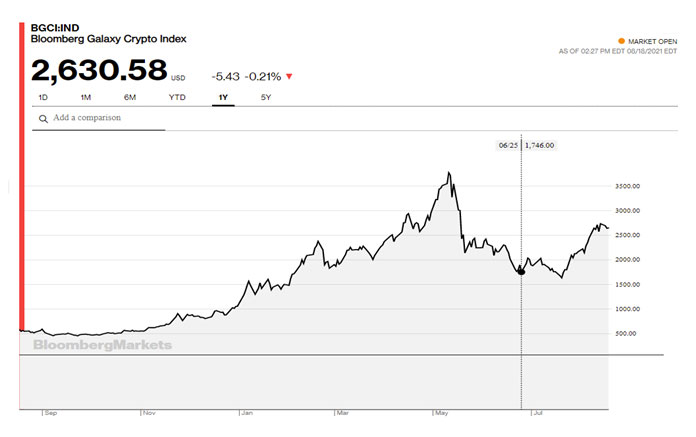 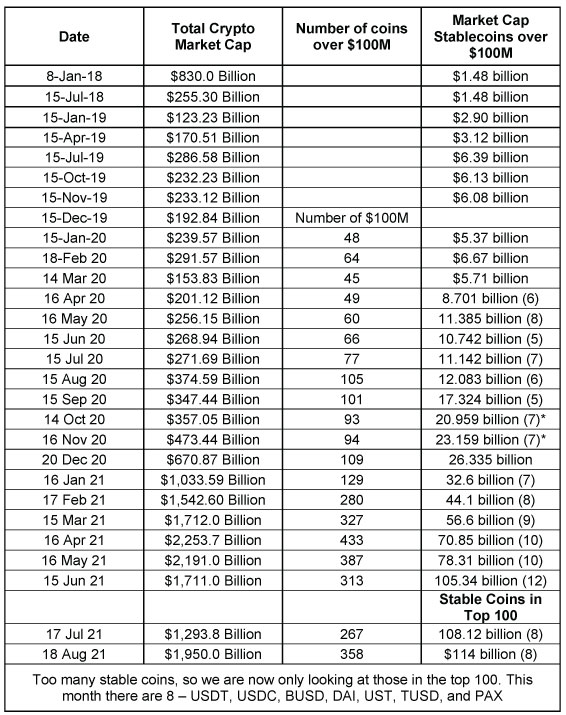 * Bitcoin was as high as 90% of the market cap of all cryptos at the beginning of 2017 to as low as 32% at the top of the market. Part of the difference is that there are now over 11,305 cryptos (but more than half are not on exchanges and don’t have a market cap) and the number keeps going up. BTC is up to 44% dominance and ETH is now up to 18.5%.

As I have mentioned, initial coin offerings were all the rage in 2017 until the SEC decided that cryptos were securities and ICOs were illegal. The new rage now is Decentralized Finance and this group includes the following new coins in the top 75: Wrapped BTC (WBTC), AAVE, UNI, DAI, YFI, COMP, SNX, UMA, CEL, LRC, and SUSHI. I’m sure some of these coins will become buzzwords in the near future.

The data below shows the top-performing cryptos of those we track. Top performing, in this case, means gaining over 500% since the start of 2021. The table below shows a comparison between this month and last month. I consider DOGE to be a coin that will very likely fail. But now both Elon Musk and Mark Cuban are promoting it (I wonder what they get for doing that). So you could probably trade it but I wouldn’t buy and hold it. 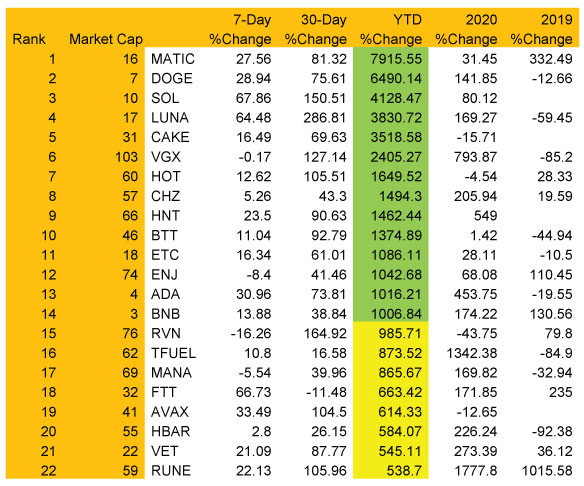 People talk about BTC being volatile and risky. But can you find something else that has gone up 1,000% in 3 of the last 12 years, gone up over 100% in 7 of those years, and had only two losing years? There is only one other asset class besides BTC with anywhere near an equal performance – other cryptoassets. Also, despite the bloodbath in May, BTC is still up in 2021.

Our Super Trader BTC system beats buy and hold and if you can tolerate 50% drawdowns or more, the overall returns are huge.

Gold was not a path to safety during the pandemic and is not one now either even with Biden as president and the probability of more massive government spending. The gold price certainly doesn’t reflect a big devaluation of the dollar as some newsletters are promoting. Many people cling to the belief that gold is the asset to hold to preserve value but that may no longer be the case now that the world has a new form of money/value. Thousands of years ago, some cultures used seashells as a representation of money/value.

Even though cryptos are now worth about $1.9 trillion, gold still has about 40 times higher market cap. If all the money in gold went into BTC, BTC’s price would be about $370,000.

Here are what some savvy crypto investors are saying now about cryptos and BTC.

Despite the recent 50% decline in BTC, the most sophisticated whales did not sell (Soros, Dalio, Paul Tudor Jones, etc). Look at what the big investment banks are now doing in the crypto news section.

The Fed actually talked about crypto at the latest meeting. Neel Kashkari, head of the Minneapolis Fed, was quoted as saying, “Crypto is 95% fraud, hype, noise, and confusion.” Tell that to George Soros, Paul Tudor Jones and Ray Dalio. By the way, wouldn’t you say the same thing about any fiat currency like the US Dollar?

The Lightning Network might really improve the status of BTC. Right now, BTC is an inflation hedge as a depreciating asset (as fewer and few coins are minted) and an alternative currency outside of government control. Lightning is a blockchain network that sits on top of the BTC network and promises a much faster, more efficient way for people to transact BTC. Lightning Network channels are turned into a single transaction that are then settled on the Bitcoin Core Network. El Salvador, now that it has adopted BTC as an official currency, is looking for ways to adopt the Lightning Network. Lightning’s growth is going parabolic, growing 20% in the last 30 days across 56,000 channels.

BTC miners have approved the first BTC upgrade in four years called Taproot – but it won’t result in a split. By adding several new privacy functions and more efficiency to transactions, Taproot actually bundles three distinct upgrades. This upgrade promises that BTC will become more than just an alternative currency. Taproot will enable new applications and new businesses to be built on BTC’s blockchain both at the core protocol level and on the Lightning Network. The BTC community has agreed to a rollout but due to the amount of testing involved, the upgrade probably won’t happen until November of this year.

Over 50% of BTC miners were in China and most of them are being forced to move. Many miners had to sell BTC to fund their move which accounts for some of the decline. The new location for many of them was Texas but two bills have introduced a lot of unknown regulatory factors into the crypto space.

First, the Senate passed the Infrastructure Bill which placed an unfair burden on BTC miners, stakers, and other groups. The bill calls anyone who facilitates the transfer of crypto “a broker” and they have to report all of their transactions to the US Government. Currently, the House has amendments to revise that language but the bill may not even pass. In addition, the House has a bill to regulate crypto massively and who knows what happens when the government starts to regulate crypto. All of this creates massive uncertainty and thus does not facilitate an environment for big gains – at least not yet.

In case you were not aware of it, there is an Enterprise Ethereum Alliance. The founding members include Accenture, Banco Santander, BlockApps, BNY Mellon, CME Group, ConsenSys, IC4, Intel, JP Morgan, Microsoft, and Nuco.

An upgrade just occurred in ETH that did not result in two coins. It was called EIP (Ethereum Improvement Protocol 1559) and it will change the fee structure of Ethereum by splitting ETH gas fees into two parts. Now, gas will include a tip from the sender to the miner and a base fee that will be burned (meaning the ETH in the new fork will start to shrink). I personally think this is a great upgrade because I have wanted to get out of some of my ERC-20 tokens on UniSwap but the gas fees were almost equal to the value of the coins. This hard fork, called the London Hard Fork, launched on August 5th and some predicted that ETH would go over $3,000 by the end of August. That actually happened in early August.

Ethereum is also shifting to ETH 2.0 in December and the change is major. ETH 2.0 will run on the Beacon chain which will introduce proof of stake to Ethereum. Right now, both ETH and BTC are based upon proof of work, with ETH miners solving a problem. Proof of stake eliminates miners. At first, ETH 2.0 will exist separately from the ETH main network but eventually, they will connect. ETH will still be the basis for smart contracts, that won’t change, but the change will result in a 99.95% decrease in energy needed for transactions. Beacon has been in testing for months.

I think there is a possibility that ETH could overtake BTC.

This is a free newsletter to the VTI community. It makes no recommendations about buying or selling anything. Instead, it’s about understanding cryptoassets and how money is made.

My beliefs are that ETH could reach a trillion in market cap after becoming a Proof of Stake token and transaction costs go down substantially. After all, it’s the backbone of the DeCentralized Finance Movement.

In addition, BTC will go through a major upgrade later this year which will turn it from a 1st generation cryptocurrency to a 2nd generation with the addition of smart contracts.

Both of those should be huge movements and both take place this year.

This is Van Tharp.