Let me put this into perspective. In late 2017, I said that cryptoassets were the biggest institution revolution since the Industrial Revolution and that they represented the investment of a lifetime. Institutions were not ready or capable of participating in that revolution so they “pooh-poohed” cryptos. Michael Saylor, the President of MicroStrategy said in 2013 that BTC’s days were numbered but now he’s personally one of the top 100 holders of BTC. On October 28, 2020, he said he owned 17,772 BTC purchased at an average price of $9,882. At one point he said that he was purchasing $1,000 worth of BTC every second. His company, knowing about his personal purchases, purchased most of its coins after he’d already acquired a large personal stake. MicroStrategy now owns about $3 billion in BTC.

In 2018, the SEC decided that most altcoins were securities and that precipitated a huge bear market. Cryptos underwent an 85% decline into the last month of 2018 and BTC hit a low price of $3,236.76 on December 15, 2018. But then look what happened:

Last July we decided to use tuition money from new Super Traders for a GBTC position. We took all the risk but would credit the STs with 79% of any gains. Those who paid their $10,000 tuition were able to cover all of their ST Foundation tuition without paying any additional money because of the credit our position gained in just six months. Those who paid $25,000 were able to use the gains to pay for the rest of the ST Foundation tuition and, in most cases, also pay the ST Awakening tuition. The crypto price gains were impressive – there was actually a period from October through November last year when our crypto positions gained over $3 million in seven weeks.

What did I say in 2018? Cryptos are the investment of a lifetime!!!

While BTC could go up another 5-10 fold over time, I doubt that it will go much over $100,000 this year. Our Super Trader BTC system currently has a stop price at about $45k which means we have less than a +2R gain left if BTC gets to $100,000 this year from the current risk levels. The system entered at $9,156 on May 6th, 2020, and currently has a gain of 590%. The system has held the position for 344 days which is the longest the system has held a position. The price is nowhere near our stop and it only needs about 51 percentage points from the initial price (about $4600) to be the largest gain ever.

The opportunity of a lifetime, however, is not over because now the altcoins are starting to move. Here is a list of the top 10 coins in market cap (excluding the stable coin Tether) in terms of the 2021 and 2020 market gain. Again, this list is not a recommendation of any kind – but if this is the top 10 in terms of market cap, what does it tell you about the market currently? 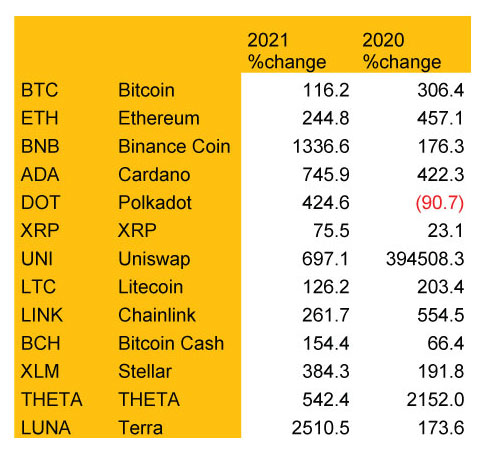 Only XRP (because of the SEC lawsuit against them) has a gain of less than 100% this year. I own all ten of these coins but none of them are in the top 25 in terms of percentage gain for 2021 for high market cap stocks. And remember those gains are just of the 3.5 months of 2021.

I think that there are a number of altcoins that could go up 10 times or more during the rest of 2021. Now we might have a decline of 40% or more during the year, but it most likely will be short-lived with a very quick recovery.

As a result, VTI opened up an all-crypto account with a new offer for potential Super Traders. We started on February 9th, exited, and reentered on February 22nd. The positions of about $850,000 are now worth about $1.4M, up about 64% in a little under 2 months.

The ST program is currently full, but we are accepting applications for people who might want to start in July. If nothing changes, I will probably repeat the offer in July, but I can’t promise anything because we take the downside risk, not you.

Why are we doing this? Two reasons: 1) I have a strong belief that this is probably the investment opportunity of a lifetime and 2) We can make a lot of money and share it with our clients. We actually believe that sharing the gains and taking all the risk increases our chances of making huge returns.

We are up nicely but it’s not because I’m a genius crypto picker, it’s because of my belief that cryptos are an institutional revolution and my overall rules for setting up a portfolio. We will teach this to our Super Traders next week – at least for the ones who completed the risk control lessons. 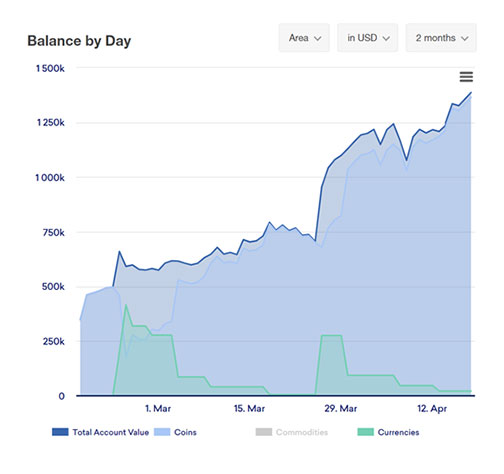 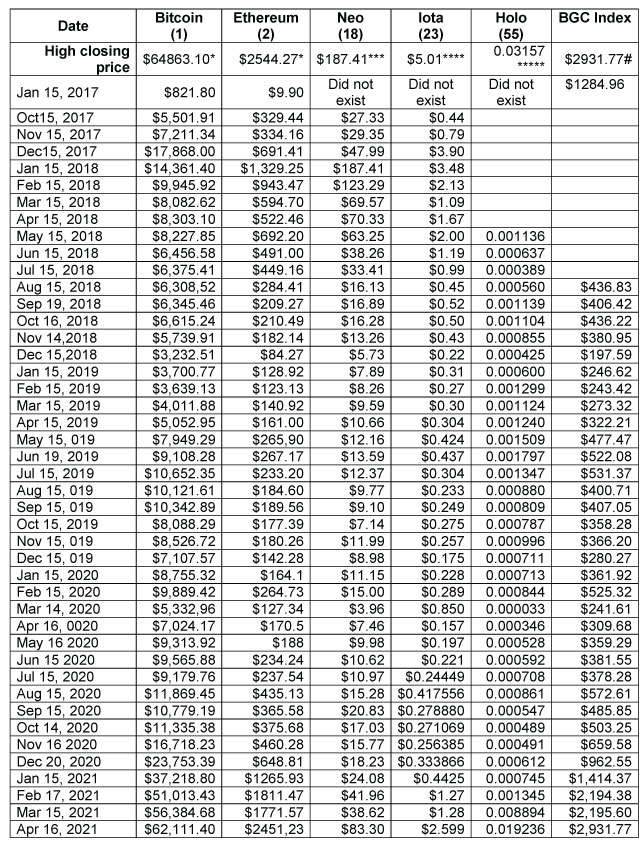 Huge changes happened this month, especially in HOT. I was actually thinking of selling HOLO because it hadn’t done much but now it’s up 880% on the year so I’m glad I’m still holding it. It shows that you need to pick a portfolio of good coins and that you find some that go up 50 times in value or more. In today’s climate, assuming everything continues on course, each coin you buy could go up at least 100%. 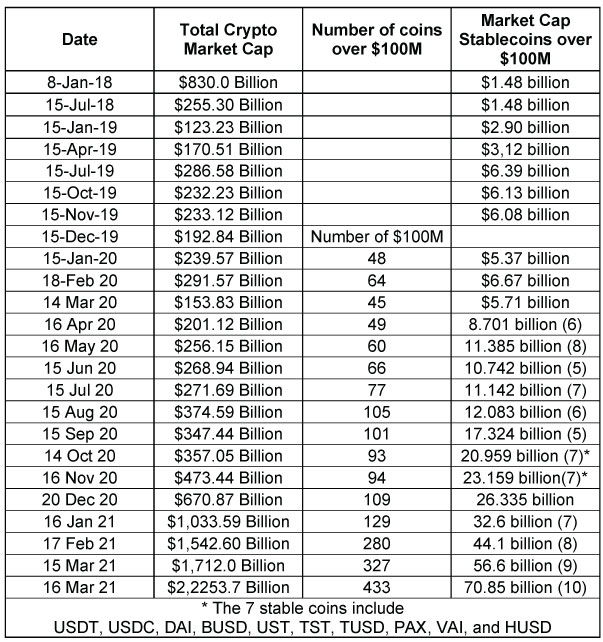 Since last month the stablecoin market had about a $500M gain in the market cap to over $2.2 trillion. And we have about 14B more stablecoins. 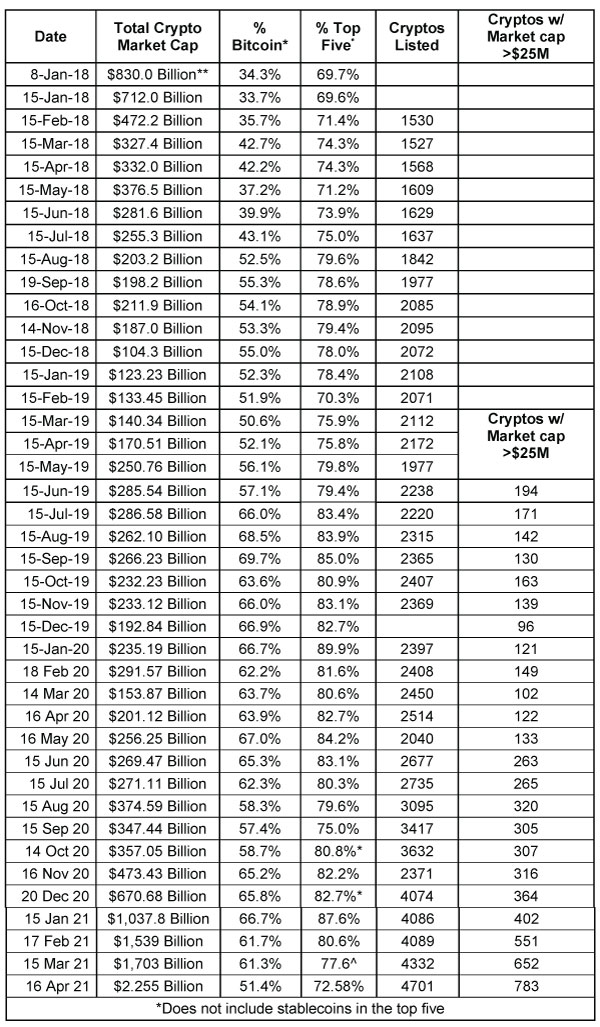 Notice that each month sets a new market high for market cap and that we are now more than triple the old high peak in market capitalization formed in January 2018.

Some interesting changes happened this month. First, there are now 4,701 coins listed and CoinMarketCap.com says there actually are over 9,000 coins. The site now lists 783 coins with a market cap of $25 million or more. One year ago, there were only 102 coins with a market cap above $25 million. That shows the bull market in the other cryptos has started. Both the dominance of BTC and of the top 5 cryptos has gone down significantly since last month.

As I have mentioned previously, initial coin offerings were all the rage in 2017 until the SEC decided that cryptos were securities and ICOs were illegal. Now the new rage is Decentralized Finance and this group includes these new coins in the top 75: Wrapped BTC (WBTC), AAVE, UNI, DAI, YFI, COMP, SNX, UMA, CEL, LRC, and SUSHI. I’m sure some of these coins will become buzzwords in the near future.

We are now following 242 coins in our crypto model where only 8 cryptos are in bear territory and another 12 are neural. Now that is market dominance for the bulls. 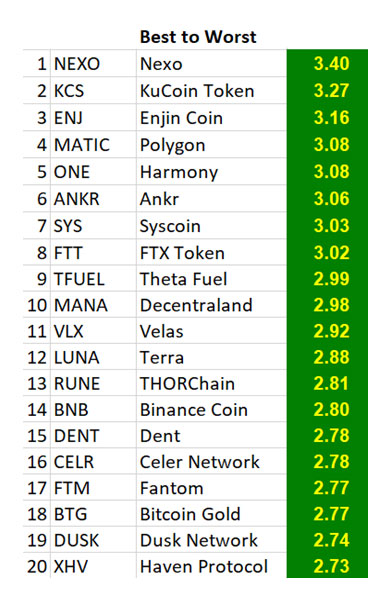 Most of the coins below 0.18 SQN are stable coins based upon the price of gold. 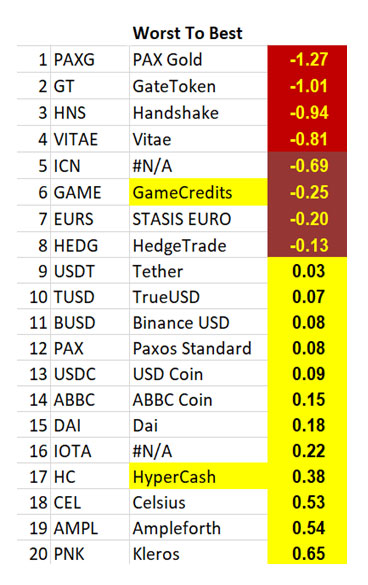 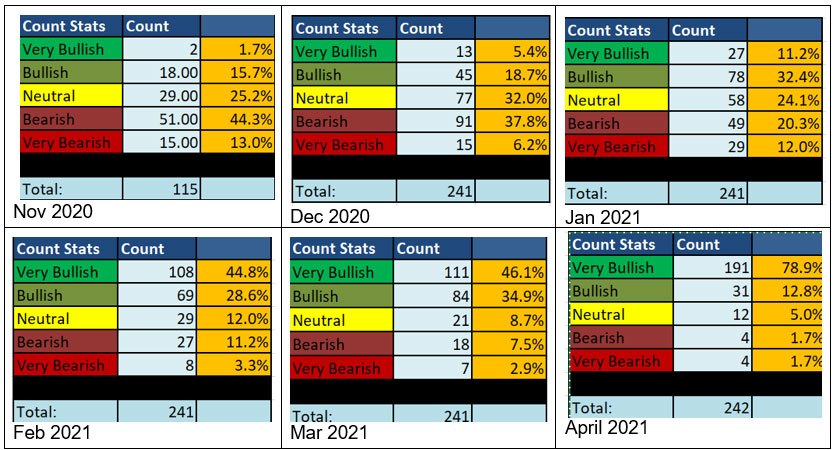 By the way, I personally think that DOGE is probably one of the worst cryptos. It’s was formed as a joke so at least it’s not a Ponzi scheme. But if you talk to most people in their 20s, DOGE is the only crypto they own because it’s all over social media. Even Elon Musk was talking about it which suggests that he might be brilliant at owning companies but that he certainly isn’t an authority on investing in other people’s companies. He might have been joking about DOGE but I don’t trust people who get sued (repeatedly) for tweets that impact the price of their company’s stock (Tesla). Right now, DOGE is up 3,237% for 2021 because it’s the only coin that interests young people. It’s based upon a meme and has no value except that some people think it’s real and important.

The data below shows the top-performing cryptos that of those we tracked. Top-performing means over 1000% so far this year (in 3.5 months). We’ll be discussing these in the Super Trader Exclusive Crypto Workshop next week. 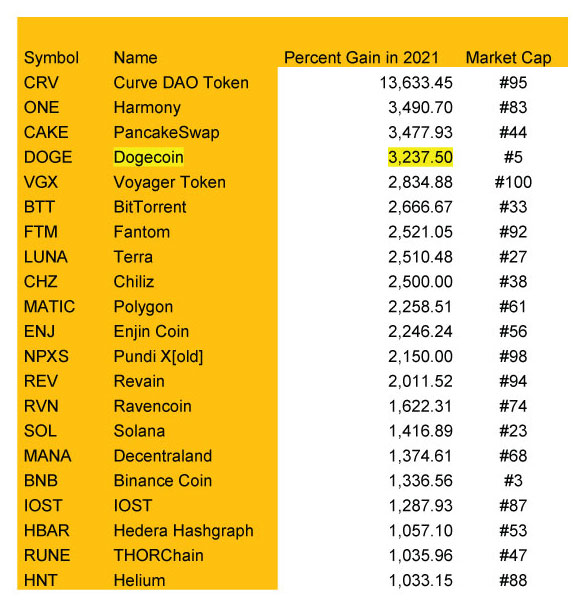 22 coins so far have a percentage gain of over 1000% for 2021. Last month the top ten coins were up by 1,250% or more in 2021. I own 9 of the coins on the list above – and I would probably own a lot more if US citizens were permitted to own them. I highlighted the Dogecoin line – that means to avoid it at all costs.

Gold has not been a path to safety during the pandemic. Now with Biden as president and the possibility of even more government spending, the path of safety is BTC.

The following table shows the BTC year change since January 2010.

People talk about BTC being volatile and risky. Where can you find something that has made over 1,000% in 3 of the last 12 years, over 100% in 8 of them, and had only two losing years? There is only one other asset class besides BTC with anywhere near equal performance – other cryptoassets. BTC will probably pass $100,000 this year (my belief – not a recommendation or a prediction) but the real stars will be the other crypto assets (again my belief).

Many newsletters with their scare tactics are saying that the US Dollar will get an official devaluation of about 30% in April. Now, I imagine this is just one of the usual scare tactics that newsletter copyrighters use to get you to buy their service, but gold certainly doesn’t reflect a potential devaluation of the dollar and it certainly doesn’t look like the place to be when compared with cryptos. Many people cling to the belief that gold is the asset to hold to preserve value, but that may no longer be the case. Thousands of years ago, some people used seashells as a representation of money/value.

Gold has about 10 times more market cap than cryptos right now (even though cryptos are now over two trillion for the first time). If all of the money in gold went into BTC, the price for a single BTC would be about $370,000.

If you had bought BTC at the beginning of 2012 (which was not the very beginning), you would have turned $1,000 into more than $12.36 million (it was up to $4.5M only three months ago month). Our Super Trader BTC system has had only three losing trades and has outperformed buy and hold. The system entered its last position on May 6th at $9,156.06. The current position is up 590% and is outperforming buy and hold – if you don’t count the impact of taxes.

Finally, here is a chart showing the price of BTC since 2016. It used to show a huge gain at the end of 2018, but look how that runup compares with the current price. 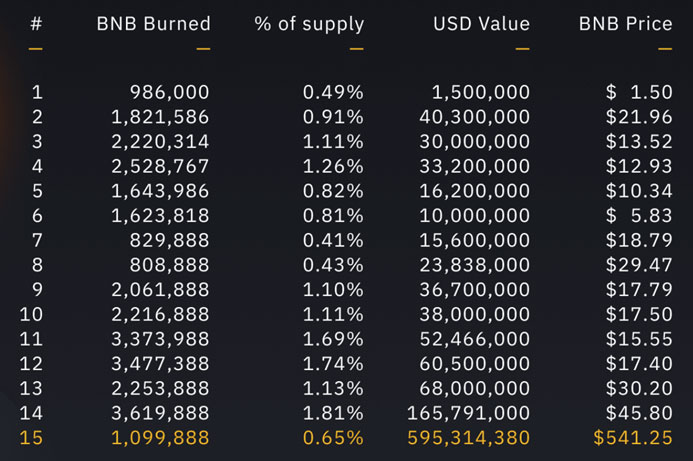 This newsletter does not make recommendations but is designed as a free educational service to the VTI community. I state some of my beliefs about crypto assets in this article but none of it is any kind of recommendation for anyone else. I personally own positions in most of the cryptos and trusts mentioned in this newsletter. In addition, I have substantial cryptocurrency positions in many of the top 100 cryptos by market cap and probably nearly everything mentioned in this newsletter. The VTI trading account has positions in ETHE and GBTC and OBTC and BRPHF.

Until mid-May, when we’ll do our next crypto update, this is Van Tharp.