There must be some kind of way outta here,
Said the joker to the thief.
There’s too much confusion,
I can’t get no relief.

While these well-known words from the song “All Along the Watchtower” were recorded back in 1967, they seem very fitting for the situation we find ourselves over 53 years later. But the relief which traders want right now is not necessarily relief from the worst pandemic in over 100 years. That would certainly be welcome but traders would rather have relief from news that would continue to push the market higher – under more normal circumstances.

From the perspective of traders and investors, it seems that the “way outta here” for now is through stimulus money from the Fed and other central banks.

Stop Me if You’ve Heard This Before

Broken record alert: Coronavirus cases have been spiking across the South, West, and Midwest.

Apple Inc. (AAPL) closed U.S. stores again as it did earlier this year due to COVID concerns. Hospitals in Arizona and Houston are out of beds. Florida reported more new cases on Sunday than any state ever has, including New York.

Meanwhile, markets keep moving higher. The Nasdaq Composite index has been hitting all-time highs repeatedly for weeks. Even after last week’s strong but short-lived rotation out of tech stocks, the index hit another closing high on Monday, July 20th. All the mega-tech stocks (the FANGMA crowd) are right at the top of the page with FB, AMZN, NFLX, GOOGL, MSFT and AAPL. They are overcoming earnings disappointments (NFLX), more anti-trust issues (GOOGL), store closings (AAPL) and ongoing privacy and content policing boycotts (FB) to still lead the market.

And more than tech is rallying. The S&P, Dow, and Russell 2000 indexes have also recovered most of their losses from coronavirus lows. Many breadth indicators remain strong.

Media report the market rallies are disconnected from the bad COVID-19 data without ever mentioning the amazing “financial alchemy” happening.

The Impact of a Massive Fed War Chest

It’s probably no surprise that the story is the Federal Reserve. As you can see in the chart below, the Fed’s balance sheet has grown at record speeds, from an already enormous $4.2 trillion to more than $7 trillion:

The goal has been to prop up the U.S. economy and the global financial system amid the COVID-19 pandemic and lockdowns. Much of the stimulus money has been spent on the same sort of quantitative easing (QE) we saw after the 2008 Global Financial Crisis. Mostly, the Fed is buying U.S. Treasury bonds and mortgage-backed securities with the effects of pushing down bond yields, interest rates, and mortgage rates.

During this unprecedented crisis, the Fed has also taken unprecedented measures. Unlike 2008, the Fed said it will also buy corporate bonds and even bond ETFs – both of which it has already been doing. The theory behind these moves is simple:

People who still have money won’t put it in CDs or savings because interest rates are too low. Many REITs and housing based investments are a no-go as well with record low mortgage rates. Most people won’t even think about putting money in bonds as the trifling yields there won’t even cover inflation. And with travel restricted, museums closed, restaurants and bars shuttered or at low capacity, and in general not much to do, there are few “luxuries” available to spend money on.

With all of those “normal” venues for money unattractive, banks have seen an unprecedented rise in deposits. Here’s an updated chart that I shared with you last month from the St. Louis Fed database:

Huge amounts of unspent money are driving up deposits. The rate slowed a bit in the June data but the number is still rising much faster than the historical rate.

So excess “unused” money ends up finding its way to the stock market. The result has been the fastest stock market rally in American history. And with all that cash in bank accounts, there’s still plenty of money on the sidelines which could fuel this rally further. (Keep in mind, however, that even $3 trillion of Fed stimulus and trillions more from the Federal Government can’t create a rally that will go on forever).

You have probably heard a lot recently about the market disconnection. With COVID-19 cases surging and the economic recovery sputtering, you would think the stock markets should be going down. Instead, stock markets are rallying so this means they must be “disconnected” from the economy. What might look like a disconnect, however, is just another consequence of low interest rates and all those trillions of dollars being dumped into the financial system.

At this point, the rally has gone on long enough that making sense of these stock prices without Fed stimulus would be a difficult task. That’s perfectly fine. Realistically, the Fed will keep interest rates low and will keep making QE purchases for the remainder of this year . . . and probably for the remainder of next year too.

The Fed has so many fingers in so many pies that it can make small adjustments in many places in its stimulus program. Each change can affect some small part of the market in very significant ways, without ending the stimulus program as a whole. That possibility is making investors and traders even more sensitive than usual to the words and actions of Fed Chairman Jerome Powell and other Fed officials.

As an example of this sensitivity, look at what happened a couple of weeks ago when the executive vice president of the New York Fed and head of the NY Fed’s Markets Groups, Daleep Singh, said that the bank was slowing down its purchases of corporate bonds. He announced that the market had recovered after $8 billion worth of Fed purchases. Potentially, the purchases could stop completely if the corporate bond market continued to improve. That may sound like a good sign for the economy but markets instead took a quick nose-dive before recovering.

So you see, traders are jittery about the Fed overreacting negatively to any notion that the stimulus programs might end. On the other hand, the market doesn’t seem one bit jittery about bad news; it just seems to shrug it off. The recent record-high increases in COVID-19 cases? The market shrugs and moves up. Weekly unemployment number modestly higher last Friday? Shrug and move up. New tensions between the US and China this week? Shrug and move up.

The apparent paradox comes down to the Fed’s stimulus. If COVID-19 continues to worsen or the recovery slows, then the Fed will continue its stimulus programs. It may even extend or enlarge these programs. In a largely Fed-driven market, that would be bullish.

So now is not the time to fight the Fed. In the short to medium term, keep an eye on what it does because it’s largely calling the shots right now.

New, unexpectedly bad COVID-19 news would still send markets down. Markets will keep going up, however, as long as the bad news is just bad enough to keep the Fed stimulating the economy – but not so bad as to scare investors out of the markets. Let’s call this the “Goldilocks Zone” of bad-but-not-too-bad news.

Let’s finish with two opportunities that may benefit from the reopening of economies in East Asia and Europe.

Nike (NKE) gets 41% of its revenue internationally and is very China-heavy in that percentage. It has been holding firm above the 50 and 200-day moving averages and is due for a new breakout from its current volatility squeeze: 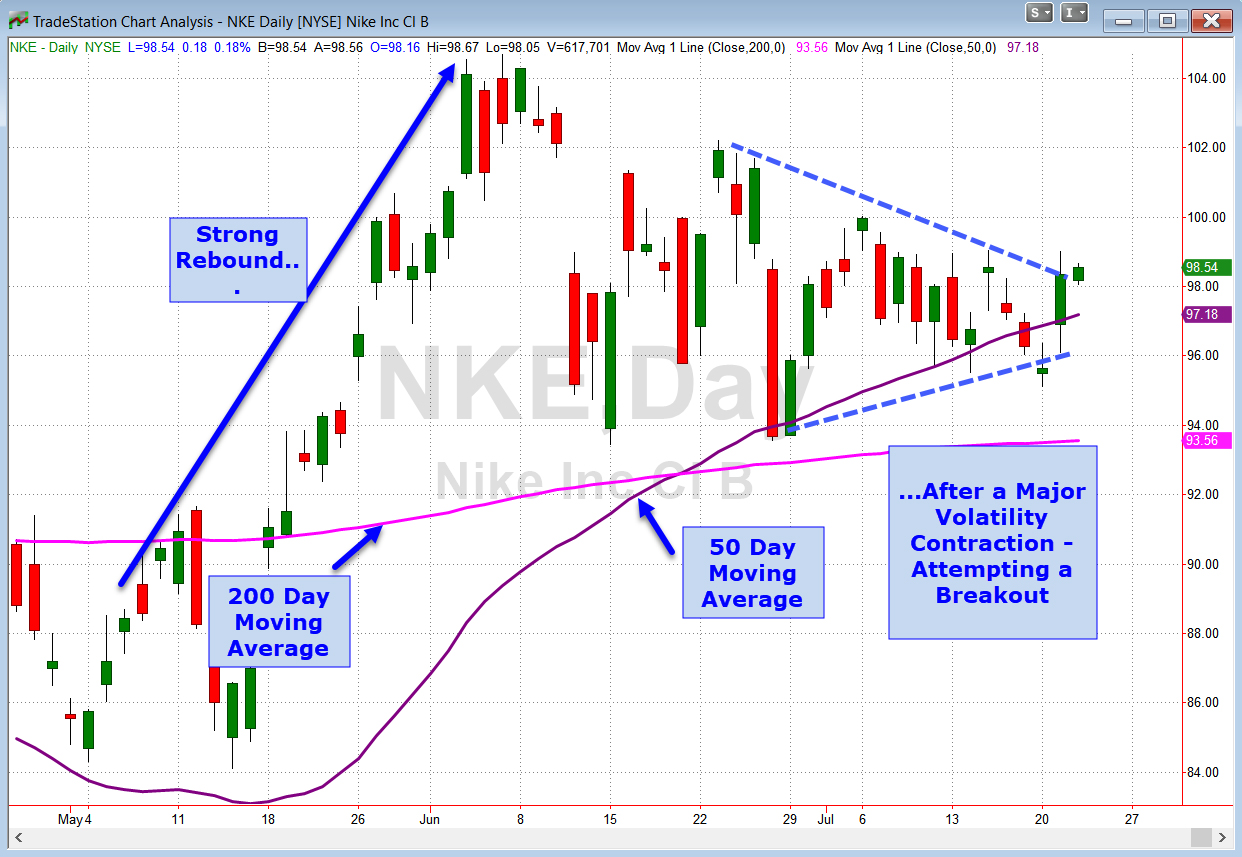 Apple (AAPL) made a whopping 60% of its 2019 Q4 revenues outside the U.S. The stock was on a tear in 2019 and has been on another tear since the March bottom. As Asian and European markets reopen, this is a stock to keep buying on every pullback.

I always love to hear your thoughts and questions. Please send them to drbarton “at” vantharp.com.

Great trading, stay safe out there, and God bless you,