On the morning of Monday March 4, the S&P 500 Index traded at the highest level it has seen since October of last year. This 4 ½ month high was short-lived, however, as the market proceeded to trade down for the rest of the week.

Readers of these tips in Tharp’s Inbox Coaching were ready for this turning point after I have drawn this resistance level multiple times for you over the past couple of months. Here’s a chart I shared almost two months ago, on January 23 showing this resistance level with the red circle “2” on the chart: 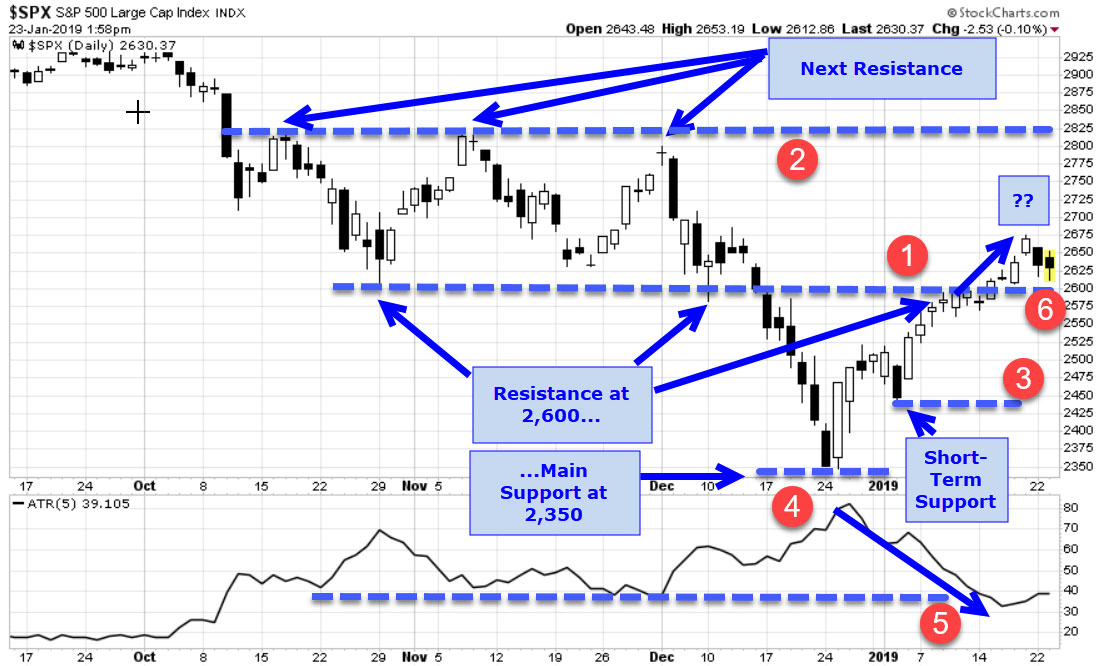 My note in that article for red circle #2 said:

“Now that the market is in the process of putting 2,600 in the rear-view mirror, the zone from 2,800 – 2,815 now looms large as the next resistance level. In fact, it should draw price like a magnet, though with the turbulent news-driven price action, it could take a bit of doing for the market to reach up and test that next important resistance level.”

So it’s little wonder that our tip readers and millions of other trading eyeballs have been staring at that resistance area when the S&P traded right up to this level in the preceding weeks. The blue arrow furthest to the right on the chart shows what happened on Monday, March 4th:

After reaching the resistance level that Monday, the market started a five-day slide. The last two days of last week’s slide were punctuated by three decidedly bad pieces of economic growth news.

1) On Thursday, the European Union significantly lowered its 2019 growth estimates.

2) On Friday morning before U.S. markets opened, China’s stock market got slammed and was down -4.4%. The reason was the surprising magnitude of the slowdown in the country’s exports. As reported by BusinessInsider:

3) On Friday morning as well, the US announced much slower than expected job growth for February. Instead of the expected 180,000 new jobs, employers created only 20,000 new jobs last month. As with many government statistics, however, we need take this number with a proverbial grain of salt. The Department of Labor made adjustments to the labor participation rate which most likely skewed the number. Still, the job growth was much weaker than expected.

Ah, but then over the weekend and on Monday morning, the kind of news came that traders and investors just love to hear.

1) On Sunday evening in an interview on the TV show 60 Minutes, Fed Chair Jerome Powell spoke about the Fed’s plans to continue the market friendly dovish monetary policy that has typified Fed rhetoric this year.

2) Early Monday morning, the China central bank issued a statement that they would turn some additional policy knobs to accommodate easier bank loans.

These developments provided a positive push for the markets to continue higher on Monday even while processing the tragic news of the second Boeing airliner crash in five months. In fact, the gain on Monday was one of the five biggest intraday moves of the year. Despite more negative ramifications from the Boeing incident on Tuesday, the market’s follow through to the upside confirmed its current upward bias.

The bottom line? Simply put – dips in strong stocks are still to be bought.

Great Trading and God bless you.