Every Monday at 10 a.m., I have a call with a friend about markets, business, and some personal stuff, too. This week I was one minute late dialing the number… because I was watching these bars unfold on my trading screen: 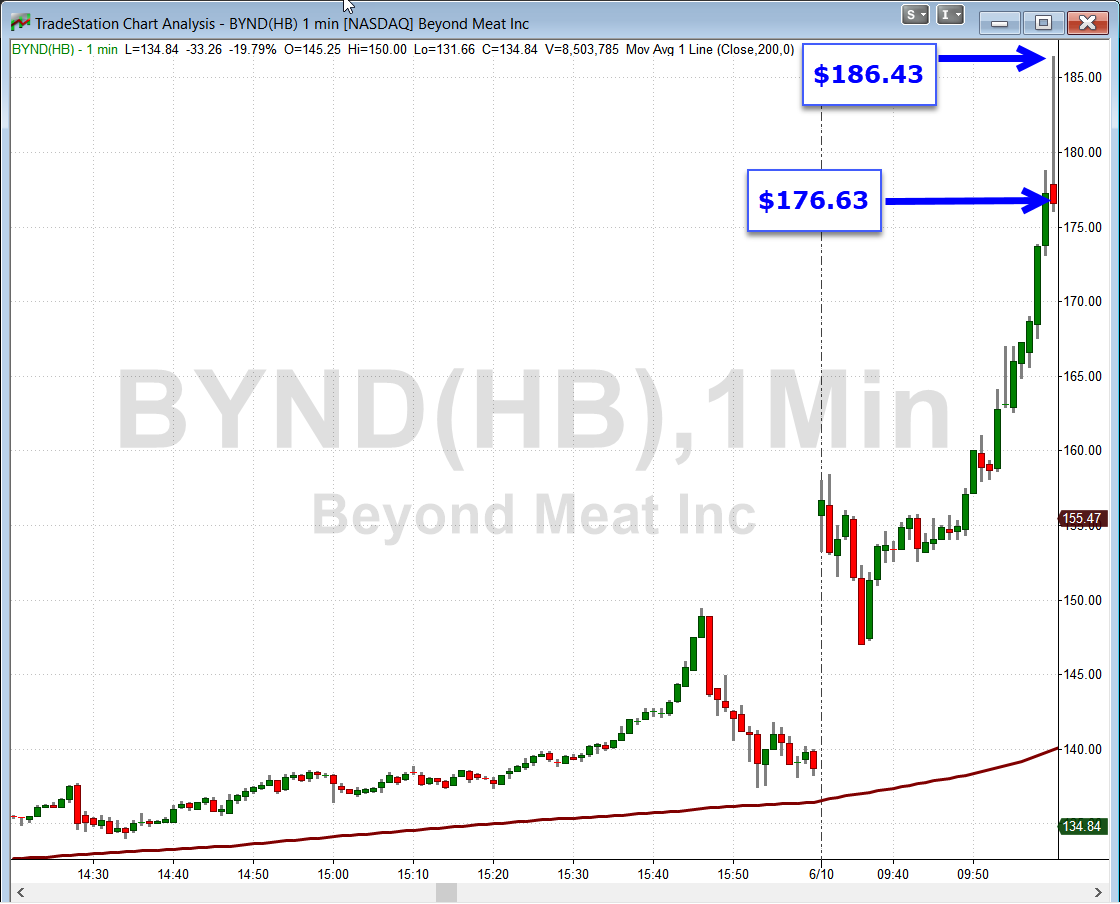 Beyond Meat (BYND) had just gapped up 10% to open and then took off rocketing more than another 10% in in the first half hour.

Since this is an old friend of many years, we usually exchange some pleasantries and get caught up on the personal side of things before we jump into market or business topics. He answered with a nice, “Hello” and I responded back with a curt nine-word sentence: “If you own any Beyond Meat, sell it now.”

My reasoning was simple: much like nature abhors a vacuum, markets abhor a parabola. They can’t be sustained. On a price vs. time chart Parabolas are the visual representation of a mania.

I actually like the meat replacement producers a lot. The science behind BYND is incredible and it’s even more so for BYND’s chief competitor, Impossible Foods. The market is expecting an Impossible Foods IPO later this year. I think these innovative companies and their stocks could be good long-term investments – but – when the market hands you an unexpected and very oversized windfall, it’s almost always wise to gladly accept.

Let’s look at some recent market parabolas and what you can do when these come about – and a few things you shouldn’t do when you find a parabola. But first, let’s revisit that seminal saying about nature and vacuums that was the basis for today’s article title.

Traditionally, Aristotle has been credited with the concepts behind the familiar idiom “nature abhors a vacuum”. It’s just a way of saying that when something moves out of a space, something else will move in. Great minds have debated through the centuries the concept that there is no true empty space in nature. Galileo, Blaise Pascal, Thomas Hobbes, Robert Boyle and even calculus co-inventors Sir Isaac Newton and Gottfried Leibniz got in on the act.

Modern science has answered this question with a few equivocations. From a quantum perspective there is no true empty space (it would still be filled with quantum fields) but there are a good deal of mostly empty space and partial vacuums.

Like nature, the markets abhors a few things. Chief among these is the parabola.
At its essence, a parabola is an exponential function. Galileo proved in his final work Discourses on Two New Sciences (from 1638) that the trajectory of a projectile traveling through a nonresisting medium is a parabola. Like a cannon ball dropping back to the ground, trading patterns that look like parabolas inevitably come back to earth as well.

Do you remember last fall that a stock with a small number of outstanding shares had an unsustainable run? 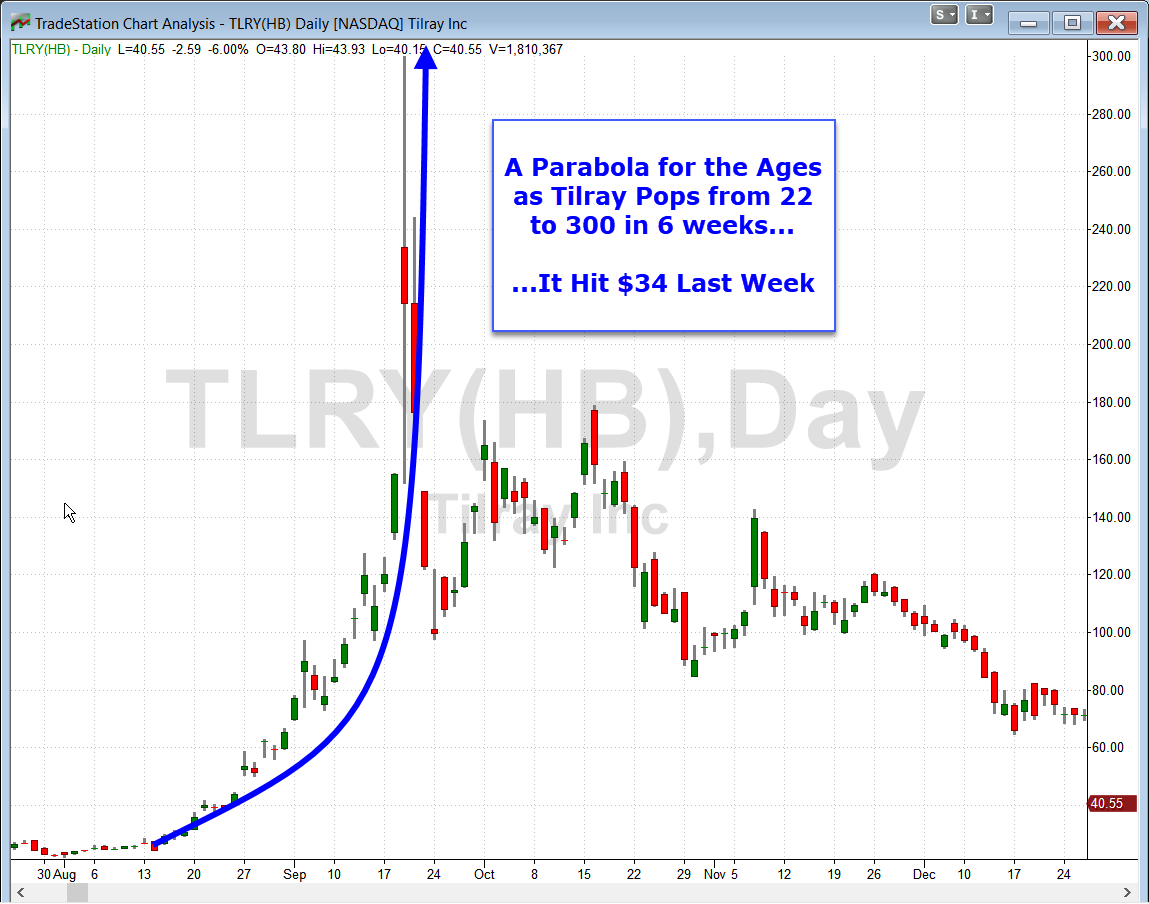 Tilray (TLRY) is a cannabis stock that received positive news last fall. Because of that news and the very limited five million shares of stock that were traded at that time (called the float), price was pushed too far, too fast in a unsustainable melt up. Like one of Galileo’s cannon balls, it has fallen back to earth and is currently trading at $40 after dropping as low as $34 last week.

Do you remember Shake Shack not too long after its IPO? Here’s an easily remembered chart of SHAK:

SHAK’s price was cut in half in less than two months.

Parabolic moves can also go the other way like this trade in gold miners that I wrote about in this very space last summer and on which I ended up making triple digit gains for one tranche of the options:

A parabola down direction, but alas, another parabola that couldn’t continue…

Lastly, how did BYND fair since it’s parabolic/meteoric rise on Monday morning? 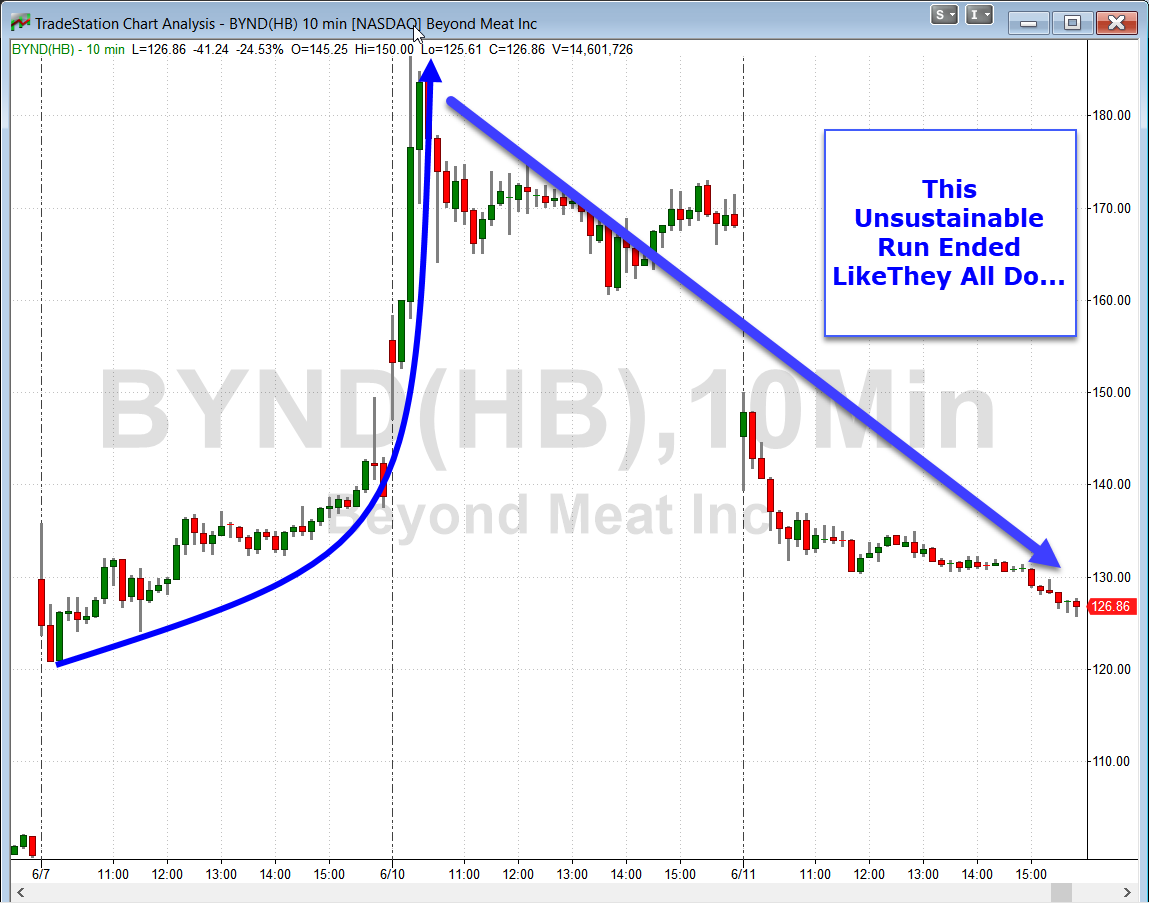 Another parabola that ended, like they all do. This opening drop on Tuesday was aided by a stock downgrade by J.P. Morgan – but that was only made because of Monday’s meteoric, unsustainable rise. And my Monday morning call partner? Let’s just say he is pretty happy now (thanks to my “heads up” he sold in the $170’s.

When the frothiness of a stock like this hits it’s pinnacle, there are only a few things you can do to profit from the situation. When I was watching this drama unfold, I looked for the possibility of selling the stock short. I checked three major brokers and none had shares to borrow at 10 a.m. on Monday. Early on Tuesday, I checked again and Interactive Brokers did have BYND shares to borrow, but the fee to hold them was the most astronomical I had ever seen. It would cost you an annualized 394.02% to borrow the shares to sell short! That’s 1.5% per day, 33% per month or 4x the cost of the stock to short it for a year.

If you’re not familiar with this fee rate for shorting stocks, in simple terms it works like this. A broker makes money by charging for transactions. The more transactions they execute, the more they make. But they can’t just take client shares – they ask for permission (one of the many check boxes you fill out when opening an account) and to encourage people to loan their shares, they pay the owner a small fee for the privilege. The broker then charges an interest rate for the borrowed shares. Currently it costs 0.25% to borrow shares of Microsoft (MSFT) – a stock that few people want to short – so the “interest rate” to borrow shares is essentially zero. When more people want to short a stock, borrowing that stock so you can short it will cost you more. For example, Tesla (TSLA) costs 0.97% currently or four times more than MSFT – but still, .97% is close to zero.

Telray (TLRY), the pot stock that had the parabolic ride last year is still a very well-shorted stock that has a borrow interest rate of 30.3% currently. That puts the outlandish 394% rate for BYND in some perspective!

One of the big influencers for how much it costs to borrow shares to sell short is the amount of “float” or shares available to trade there are. TLRY has a really small float of 5.3 million shares which explains their high borrow interest rate. MSFT has a whopping 7.556 BILLION shares of float. TSLA has on 133 million shares and BYND has 58.05 million. Which shows how incredible the 394% borrowing interest rate really is!

I also looked at buying puts on BYND at 10 a.m. on Monday. One look at the option chain knocked that thought out of my head. The Friday June 14, 2019 put options trading at-the-money with a strike price of $175 (the price of BYND when I was looking at my trade possibilities) were trading for $21.04– wow! The at-the-money puts for MSFT were trading at $1.12 at the time. Apple (AAPL), a more volatile stock than MSFT which was trading close to BYND’s price at the time had at-the-money puts trading at $1.92. Clearly options traders were pricing in extraordinary volatility and the reward-to-risk ratio was way out of whack. It was potentially doable, but only at an unacceptable risk level.

In these manias, you can play the follow through more easily than trying to pick the top. Had I pulled the trigger on buying the BYND puts, Tuesday’s big drop would have generated a closing price of $51.50 (at the $175 strike mentioned above) and a nice 144.8% gain. In retrospect, the probability that BYND would drop 25% in one day was small enough that I believe I made the prudent play sitting that one out.

So when those unusual market parabolas show up, use them as a chance to exit profitable positions but be sure you understand the reward-to-risk ratios and how they change before you jump into the fray!

I always enjoy hearing your thoughts and comments. I’d especially like to hear any “war stories” of your trading BYND this week. Please send those to me using drbarton “at” vantharp.com