Over the last two to three weeks, new Coronavirus cases in America have gone up over 80%, mainly in the South and West.

California, the first state in the US to lock down originally, reported a new daily record for the state of 9,897 cases on Tuesday. Just under half of those new cases came from Los Angeles County and no, this isn’t just because of more testing. The number of Californians hospitalized because of COVID-19 has almost doubled in just two weeks.

Texas is arguably fairing worse. The state reported 9,845 new cases on Tuesday and hospitals are now running out of beds.

Meanwhile, hospitals in Arizona have run out of beds as cases there surged in recent weeks. On Monday, Arizona’s health director authorized hospitals to activate their “crisis care” contingency plans.

Florida is in a similar situation and reported all-new daily infection highs last Friday along with Idaho, Kansas, Oregon, South Carolina, and Utah.

The daily count of new cases in America and the 7-day trailing average of that count is growing very quickly, as shown here by the New York Times: 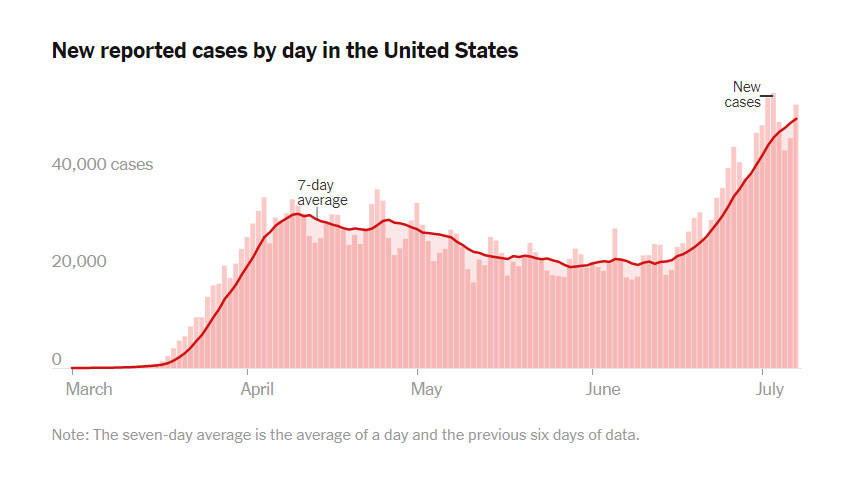 Call it a spike, a surge, the second stage of the first wave, or whatever you would like to call it. Regardless, it’s here and it’s bad.

This Surge Is Real

There’s a lot of misinformation out there surrounding this recent surge. Some people have a vested interest in making these numbers seem like a blip in the data and nothing more. So let’s quickly set things straight. As much as I wish that there was some benign explanation for why all these states are seeing their infection numbers rise, there isn’t. It’s not some anomaly caused by increased testing. Hospitalization rates and the percentage of tests coming back positive are both climbing in these states which means the virus really is spreading. Arizona’s rate of positive tests has grown from 15.4% to 23% in recent weeks though it moved back down over the last couple of days.

California, Texas, Arizona and others have already halted or even reversed their reopening plans. According to data provided by the app GasBuddy, Texans appear to have stopped driving again suggesting they’re locking down on their own.

I’m afraid this surge is all too real. But if you look at the stock markets, you wouldn’t know it.

Go back to Friday, June 26 when much of this new surge data came out. Texas announced it was re-imposing some lockdown restrictions and the Dow dropped some 700 points. The market made back more than 500 of those points on the following Monday with further gains following through in the subsequent five days until yesterday’s “Turnaround Tuesday” breather.

One day jitters aside, markets don’t seem to be reacting negatively to the trend of all the bad news. Not yet, at least. In the near-term, markets might appear to be shrugging it all off because of the stimulus. But clearly, the stimulus isn’t immunizing the market to every negative factor. Two weeks ago we saw DOW futures drop 400 points amid a hint, quickly retracted, that the White House was abandoning the trade deal with China.

No, the real reason why the market is shrugging off all this bad news is not the stimulus but it is rather simple…

While COVID cases are rising, COVID deaths have been declining overall as this chart shows: 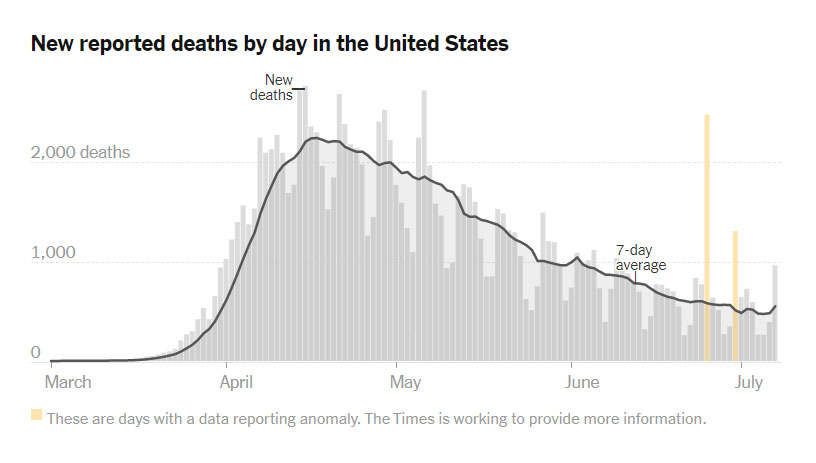 In other words – this new surge doesn’t look to be as deadly as the last one. Why? For one thing, hospitals and physicians know how to manage COVID better today. We have drugs like remdesivir and dexamethasone proven to help those worst off.

In addition, the coronavirus seems to be spreading more among young people now. According to USA Today, “People under 45 made up 42% of cases before Memorial Day weekend but 55% of cases reported since then.” As young people are much less likely to die from COVID than older people, this again bodes well for the death rate staying lower amid this surge.

Hanging Their Hat on Hope

Perhaps what we’re seeing then is optimistic traders buoyed by stimulus money hanging their hat on the hope that this surge won’t be as deadly. Fewer deaths should mean milder economic damage – even with more cases.

Traders seem to be reacting the same way to the return of COVID. It’s back, it’s bad – but at least people aren’t dying as much as before.

First of all, we can fully expect a time gap between an increase in infections and deaths. After all, it can take two weeks for symptoms to show up and then weeks again before someone’s symptoms are bad enough to require hospitalization. Hospital stays for COVID patients can stretch to weeks before some die from it.

You can see a little bit of this in the charts above. See the red chart where the spring peak in new cases happened in early April? Deaths didn’t peak until the middle of April about two weeks later. Remember, in those early days of the pandemic, America’s testing capability was much worse than it is now so chances are the virus had been spreading for much longer than that chart shows.

Secondly, more young people getting infected now is actually worse in the long run. Yes, younger people tend to have fewer and milder symptoms. They are also less likely to stay at home or be hospitalized. Instead, they are more likely to be out and about where they can keep spreading the virus. While an increase from 42% of infections in those under 40 to 55% isn’t huge, it has a significant multiplier effect.

COVID is much more dangerous for older Americans who can’t really avoid contact with younger generations. The younger people in grocery stores, retirement homes, or in the hospitals are precisely in the age range that’s now getting more and more infected. Deaths from this latest increase in cases may not become as serious as New York City in the spring but the greater the number of people who get infected, the harder it becomes to protect the vulnerable.

As a nation, I hope we do some necessary voluntary practices like social distancing and wearing masks when proper distancing isn’t practical. But given current circumstances, that doesn’t seem likely.

We are looking at a similar market scenario to what we saw in the early stage of the reopening. Then, I told you that the markets had carte blanc for a few weeks of trending higher before new cases Covid-19 cases started to show up. We have a similar scenario now – markets will trend up – although with more volatility than before – until more severe coronavirus protective restrictions are put back in place. Don’t be surprised, however, if the optimistic case for a “less fatal” coronavirus surge falls apart in a few weeks. We may have seen a precursor of that in yesterday’s new spike in reported deaths that you can see in the last bar of the NY Times chart above.

So for the next few weeks at least, enjoy some stimulus-induced market strength. Yes, there will be brief but strong pullbacks thrown in when we get negative COVID or China news. But until we see how mortality rates play out from the new surge, it will be more of the “stimulus wins” game.

What’s a buy? Well, proven names keep working. Yes, you can still buy the megatech symbols on pullbacks. And for a less obvious play, I like Activision Blizzard (ATVI) which has proven to be a stay-at-home stock relatively immune to the violent pullbacks that have plagued other stay-at-home names. To boot, it’s breaking out to new highs. Play the breakout or wait for a shallow pullback.

I always love to hear your thoughts and questions. Please send them to drbarton “at” vantharp.com.

Great trading, stay safe out there and God bless you.