What do you see when you look at the world market model table for the last day in June? 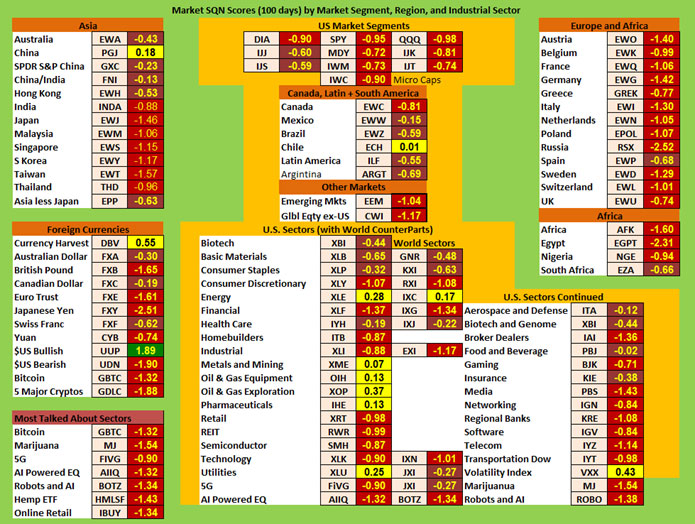 Look hard. In the whole wide world, do you see the solitary green Market SQN® score? In all the equity markets around the globe, among all the currencies, and within all the equity segments and equity sectors in the US markets and globally, there’s only one Market SQN score that has any strength in the table: the US Dollar.

The entire database is measured through the lens of the USD so its strength makes every foreign-related ETF seem relatively weaker. But, things are weak to start with. Then you look at the US market segments or sectors to find weakness there as well.

Let’s start in the upper right and work our way around the table clockwise:

Some headlines have recently stated that the first two quarters are the worst start for the market in many decades. On a monthly basis in the model, June has probably been the most negative picture since the global financial crises.

We finally see some green in the tables when we hit the commodities section. 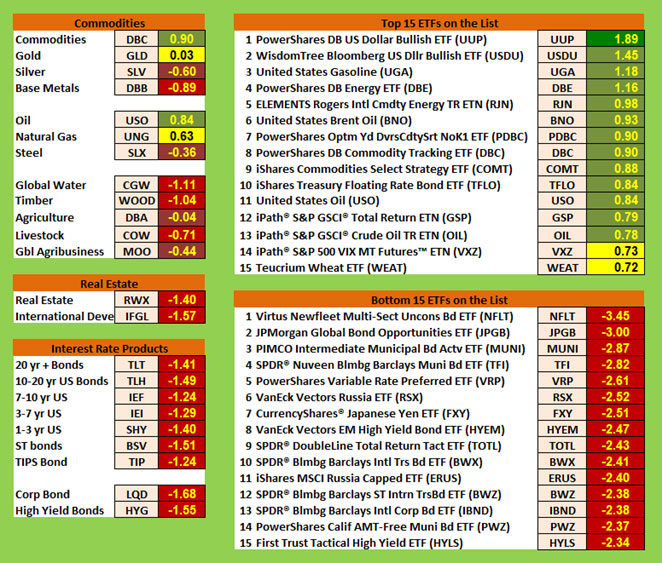 The blended commodities ETF DBC and oil are still green, though light green now compared to dark green last month. Gold and natural gas are slightly positive and the rest are negative.

Real estate and debt? All red.

The top 15 list doesn’t even have 15 green-score ETFs. Of the 550+ ETF symbols in the database, diversified across global markets, asset classes and equities, we have one dark green symbol and 12 light green symbols at the end of June. That’s probably a new record that reflects just 2.5% positive scores in the database. The bottom 15 list is very, very weak. The list contains mostly bond-related symbols but includes Russia and the Japanese Yen. 89% of the database has bearish scores which is more than last month’s already very bearish 79%.

June may have been the most globally bearish month the model has seen.

What are the primary factors affecting the big picture right now?

Equities continued downward in the US in June and three of the four time periods we track now have a market direction of Strong Bear:

For the second month in a row, the S&P 500 fell to new 52-week lows. If you notice, the bars and wicks are a lot lengthier. That’s an easy way to see that volatility is much higher now compared with the third and fourth quarters of last year.

The market spent another month in Strong Bear territory on the Market SQN chart.

All four major US equity indices declined further in June and the YTD performance ranges from a 15% decline to a 30% decline. 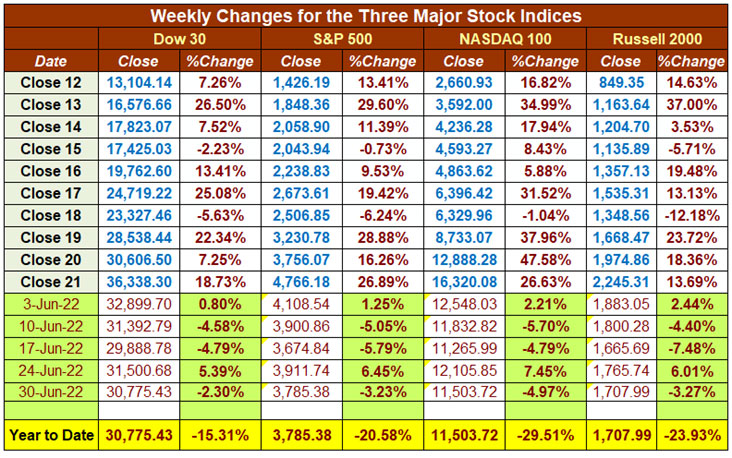 Here’s an interesting turn of events from the last few months.

Well, in the real world, we just had a major driving weekend (US Independence Day Holiday) but gas prices seemed to have stopped going up. Cherries are now cheaper per pound than blueberries in the grocery store, but the residential real estate market is hard to gauge locally—basically, no one is selling their house in our area. (In spite of a potential windfall from a sale, hardships might follow: shopping among very few home choices in an amazingly tight market and buying at higher mortgage rates than recent years.)

Van’s model is useful in that it measures items that have an effect across the economy rather than using local or anecdotal evidence. Does the model say inflation is over? Not yet. Not with a score for a single month. In the coming months, the markets will tell us more.

USD seemed to be bumping up against resistance again at the 105 level. After getting close in May, the index fell off about 4% early in June but spent the last three weeks flirting with 105 again. D.R. Barton used to say a resistance level is like Saran Wrap—price will test it a few times before the level yields and price breaks through. We’ll see if that happens in this situation.

If you have some technical beliefs about resistance, you might note that if the dollar surpasses 105, the next level of resistance is at 120. As Van liked to point out, that’s not a predication, just an observation and one possibility among many.

Keep in mind that this index is a measure of USD’s relative value against other major currencies. In relation to other currencies, the USD is more expensive now and others are cheaper compared with a few months back or a year ago. The index does not measure absolute value of USD. For Americans, stuff is getting more expensive which means the dollar is getting cheaper, otherwise known as inflation.

What does this bear market type feel like? If you are day trading, the days may seem like they are racing by. If you are HODL-ing or sitting in cash, the wait may seem interminable.

How about data? What does the data say? Van had some research that we shared with the students in the How to Develop Winning Trading Systems Workshop. Using the Market SQN method for the S&P 500, equities on a historical basis move in a bear direction 22% of the time. Compare that to bull market types which account for 56% of the time.

Thinking through some probabilities about the next market type change might be worthwhile. As mentioned in previous articles, Van’s market type shifts by either one degree in direction or one degree in volatility. Van’s research showed that Strong Bear Volatile markets tend to shift into three other market types:

This tells us we are more likely to see a decrease in the decline or in the volatility but the possibility that volatility gets worse is still significant. These probabilities tell us nothing about when any such shift might happen. A Russian roulette metaphor seems a little extreme…unless someone might be thinking to go all in and “buy the dip” now. Hopefully, the FTC or SEC won’t mind us saying, for the safety of the investing public, don’t pull the trigger on that one just yet.

So…what is next? Regardless of what the market does, this is next:

2) Be prepared for market moves*,

3) Plan how you will respond*.

* If you are at a loss for how to consider all that could happen in the markets, prepare for big changes, or come up with a plan that helps you succeed, register for the upcoming workshop, Scenario Planning: Succeeding in Today’s Chaotic Markets Through Smart Scenario Planning. Van’s long-time friend and career analyst, Ron William, will teach his scenario planning process which integrates a triad of simple macro, fundamental, and technical factors. Ron helps fund managers in the US, Europe, and Asia prepare for both likely and unlikely scenarios. Prepare yourself for a decade of surprises by learning how to develop a responsive plan, craft more resilient systems, and produce outstanding results.