“I’d rather own Bitcoin than Bonds.”

I’m doing a special update on cryptos because of the recent crash. My belief says we just had a mini-bear market within a major bull market and there is still great opportunity ahead in this market.

On May 18th, BTC had a low of about $42,368—but then it dropped overnight to about $12K and hit its low so far of $30,681 on May 19th. Many of the altcoins went down as much as 50% during that period as well. Wow! I had unloaded a lot of my personal crypto holdings on May 18th so it felt good to then see the market drop like that the next day. I had also liquidated the VTI crypto portfolio as it was slightly below breakeven and the last thing I wanted to do was turn a 60% profit into a significant loss. 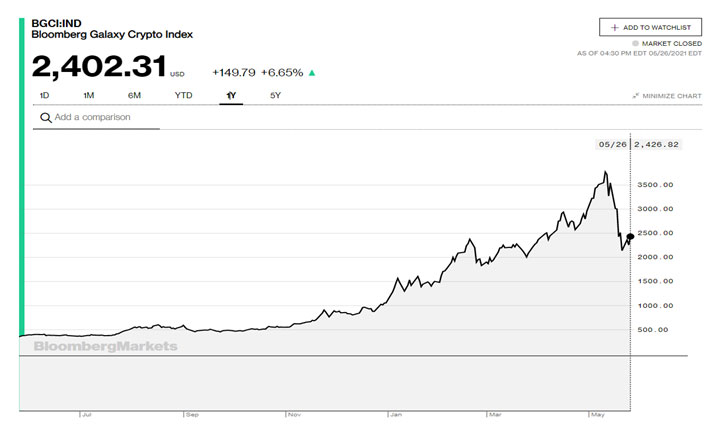 The index was up over 3,500 earlier this month and then it dropped to about 2,200. It has slightly recovered to 2,402. This index is put out by Galaxy Digit (BRBFH) which is one of the better crypto stocks available.

The selloff was insane and had no logic behind it. Here are a few factors that I think influenced the drop.

First, we had Elon Musk and his famous tweets. Can we trust people who make lots of tweets like they know what they are doing? Consider especially that Tweets confine users to one or two sentences that cannot be explained in any detail.

Next, we have crypto options traders and futures traders. First, options traders have to hedge their options positions in the futures market with short positions. Then as the market starts to run down, a huge number of futures traders start going short and driving the price down further. Most people thought that was probably Musk selling his $1.5B position, however, Musk didn’t sell his BTC position nor did any other big institutions that I know of.

Third, we also have China. Their central bank now has a digital currency and China has started cracking down on other cryptos. BTC mining in China started to dwindle but wait, shouldn’t that increase BTC prices? Once the US futures traders are done for the day, subsequent price declines seem to occur during off-hours from the apparent activity in Asia.

That’s all it takes to crash prices 50% in a major bull market. If you invest in crypto, then expect to live with huge volatility. No major institutions that I know of, however, have sold off their crypto investments. Perhaps there are one or two, but I’ve looked and haven’t seen anything like that.

On May 7th, Yellow talked about stricter cryptocurrency compliance with laws requiring any transfer of $10,000 or more to be reported to the IRS. And Yellow said, “Cryptocurrency already poses a significant detection problem by facilitating illegal activity broadly including tax evasion.” On top of that, the media likes to talk about government crackdowns against crooks using BTC. If the government gains one blockchain address associated with your name, that’s all they need to know to find out what you have done with your cryptos and then unwind your entire portfolio. Tracking crypto transactions is much easier for the government to do than tracking cash transactions.

From a technical standpoint, I’ve seen various comments including the following:

Aside from that, there is no other negative news. In my opinion, crypto prices will probably surpass their May highs later in 2021 despite needing a 100% gain in many cases to take out the old highs.

1) PayPal now allows people to transfer their cryptos to a digital wallet.

2) Coinbase plans to start emphasizing institutional clients and cater to them.

3) Crypto sales are not subject to wash sale rules. That means you can take your crypto losses now, reduce your taxes for the year, and then buy the cryptos back.

5) Several central banks are playing with the idea of a centralized cryptocurrency to replace their paper/plastic notes.

6) I found the following survey which had these major findings –

7) From that survey, I also learned:

So, let’s look at what has happened to cryptoassets since the last crypto update on May 21st when the market was 87.6% bullish (either bull or strong bull) and 2.9% bearish: 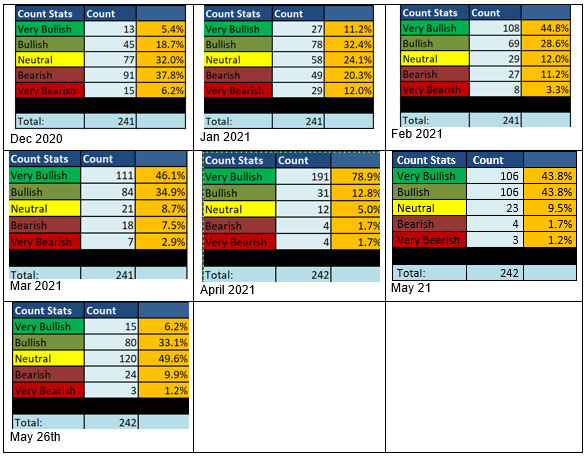 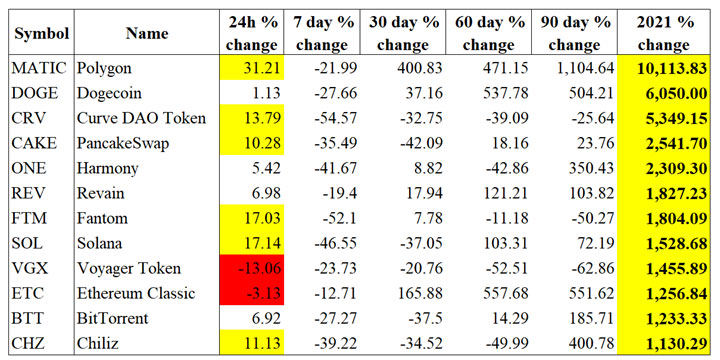 We still have 12 altcoins that are up over 1000% this year and only two of those are down over the last 24 hours.

The following table shows the top Market SQN scores (100 days). Matic is number one on this list also. 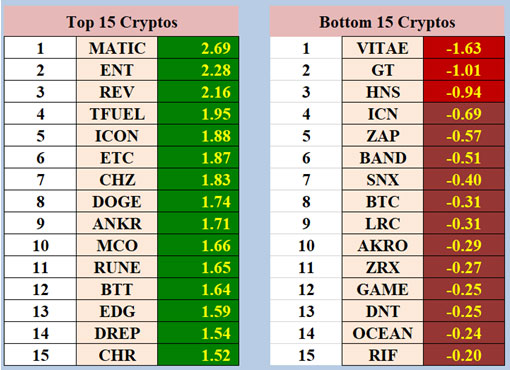 The following are my beliefs about cryptos right now.

This newsletter is free and has no recommendations to trade or invest in anything. I am simply stating my beliefs. You can only trade your own beliefs. You cannot trade mine.

Until mid-June, when we’ll do our next full Crypto Update, this is Van Tharp.