We still have a potential $3.5 trillion social spending package ahead, with higher taxes coming at us. However, they haven’t agreed upon a $1.5 trillion infrastructure bill yet. The Democrats, with only the minimum majority of votes for passage, cannot agree on anything. Meanwhile, the Fed is acting like economic stimulation may end in the near future with a possible reduction in QE.

The pandemic is by no means over, with just over half the country fully vaccinated. Of those not vaccinated, some don’t trust the government, some don’t trust the vaccines, and some think the pandemic is not real. I witnessed this on my trip last month. At various places, masks were required (on the Navajo reservations in New Mexico and indoors in Las Vegas) but at other stops, people acted as if there was no danger at all (Longhorn Steakhouse in Fort Smith, AK). 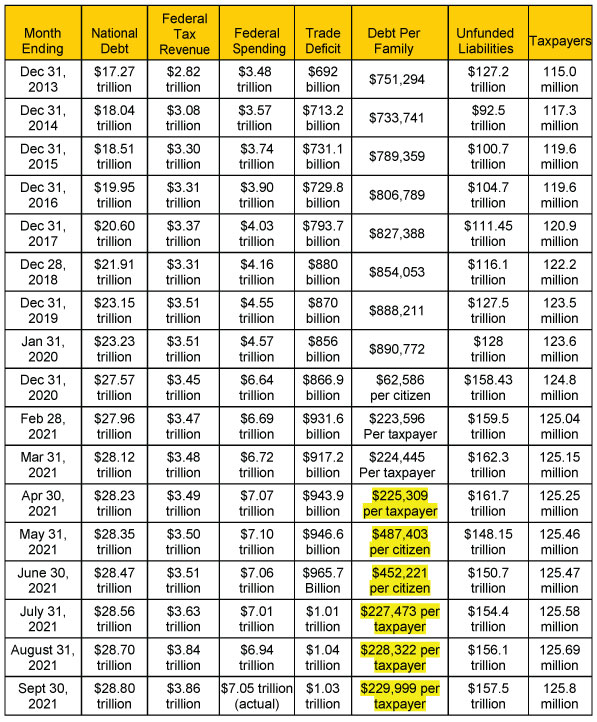 This next table tracks bankruptcies, foreclosures, and employment figures.

The table below tracks money supply figures, credit card debt, and the number of US millionaires.

All of the periods but the longest ones are weakening now.

The S&P 500 weekly price bars go from the lower left to the upper right and flatten out – a long bull market with a four-week correction. There was one all-time high last month on September 3rd.

For the same time period as the chart above, the chart below shows the Market SQN score.

It was a Bull and Strong Bull market for almost the whole of the last year. Last month, the market went a little bit into Neutral.

The next table shows September’s weekly changes for the four major stock indices and recent annual closing prices. All four indices are up between 10% and 15% over the year. 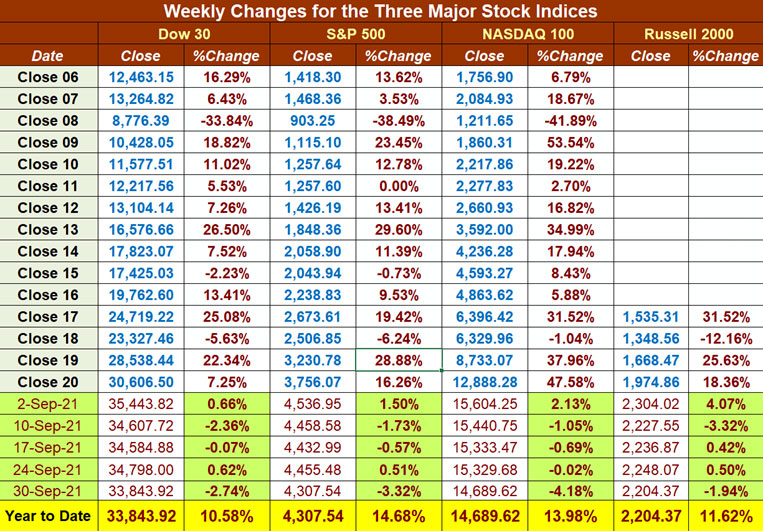 Looking at the table below, let’s see if our model reflects an inflation.

The model produced a result of mild inflation for September. Except for BTC and XLF, the other components continued to show moderate or strong inflation. For the last year or so, the model has had moderate to strong inflation results.

USD has been going up slowly since May and, as of October 1st, was at 94.23. For all of the headlines about inflation, the dollar does not appear to be losing relative value against other currencies. You can read about USD being the strongest currency in our World Market Model in the SQN Report below. The US Dollar ETF (UUP) had a Market SQN score of 1.34 (bullish) at the end of September.

For most readers, the US Dollar is your base currency. What will you do if inflation continues or increases

We had a weakening market with September being one of the weakest equity markets for some time.

Democrats and Republicans cannot agree on anything and tend to vote strictly along party lines. Within the Democratic party, however, there are currently strong disagreements about another stimulus package with progressive Liberals unhappy about spending only $3.5 trillion. At the same time, Democratic Senator Manchin from West Virginia will not support anything over $1.5 trillion.

The pandemic is still going strong and Covid remains a major issue impacting the entire world.