A lot of things are happening in the crypto world but none of them seem to be driving prices up. Let’s start this month with a chart of Bloomberg’s crypto index – 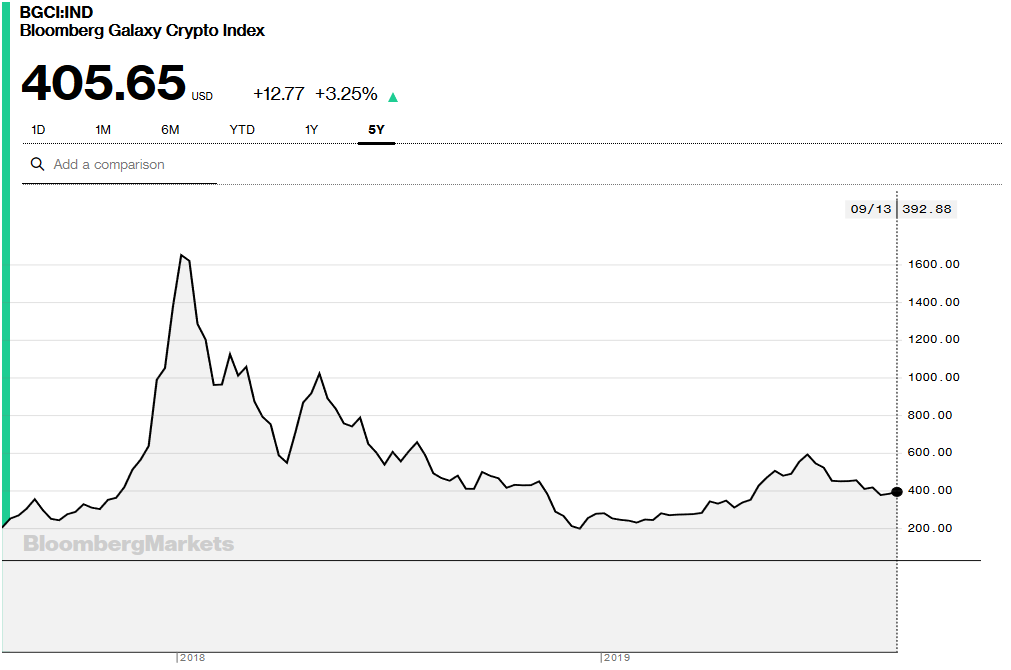 Cryptoassets started 2019 with three flat months followed by a strong uptrend until the end of June when BGCI (Bloomberg Galaxy Crypto Index) peaked. The peak was on June 26th at 668.61. The index is off of that high and there hasn’t been much change recently – last month it was at 400.71 and today it’s at 407.05.

The following table below tracks the price of five major cryptoassets across three generations of the technology: 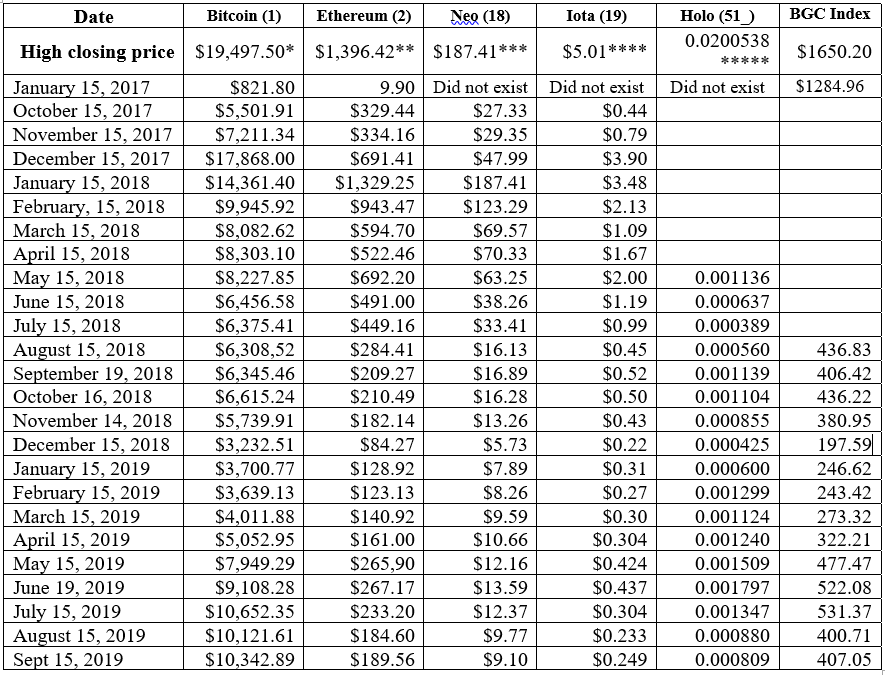 Altcoins (those other than BTC) have taken a huge hit in the last 60 days – and no one seems to mention the real reason for the drop. Effective Sept 12th Binance closes its current operations for US investors. 25% of the world’s volume for crypto trade is losing the ability to trade many crypto symbols. That is a huge blow to most cryptos, especially those that won’t be available to the US Market any longer.

HOT, BTC, ETH, and NEO are up significantly since December, but Iota is just positive. I’m now running a regular Market SQN (100 days) program on BTC just to keep track. Here is what that study shows. First BTC had been rated Strong Bull since April 30th 2019 but at the end of July, it came down into Bull ranges and it’s been just Bull since then for all but 11 of the last 33 days.

The largest range day was February 2nd 2018 – when the big bear market of 2018 was just underway. The smallest range was October 5, 2016 – but most of the smallest numbers were in October 2016. Previous to that, the largest number was the last data point we have on March 3rd 2014. March 2014 was bullish for cryptos and October 2016 was a bear market for cryptos. Thus, we might have an unusual phenomenon in cryptos where we get the highest volatility close to market peaks. In the current bull market for BTC, it hit its peak in volatility on July 20th, 2017 at 12.80. The 20-day ATR% currently stands at 3.74, which is below the mean.

The more recent chart shows that BTC is in a band with a range of about $4,000. Currently, BTC is at the low end of the range.

One of the crypto newsletters I read said that BTC just had its biggest initial bull run in its history. That newsletter also says that altcoin rallies usually come about 6 months later – after the bull market in BTC finishes. I think altcoins are being impacted primarily right now and for the foreseeable future, however, by the inability of US investors to trade many of them.

By the way, US investors cannot participate in so many altcoins for another reason. The SEC is exercising its power and calling all of them securities and thus they come under its regulation.

The market cap table below shows a similar pattern to the individual cryptos in the table above. The total market cap for cryptos is the highest it has been since June, 2018. 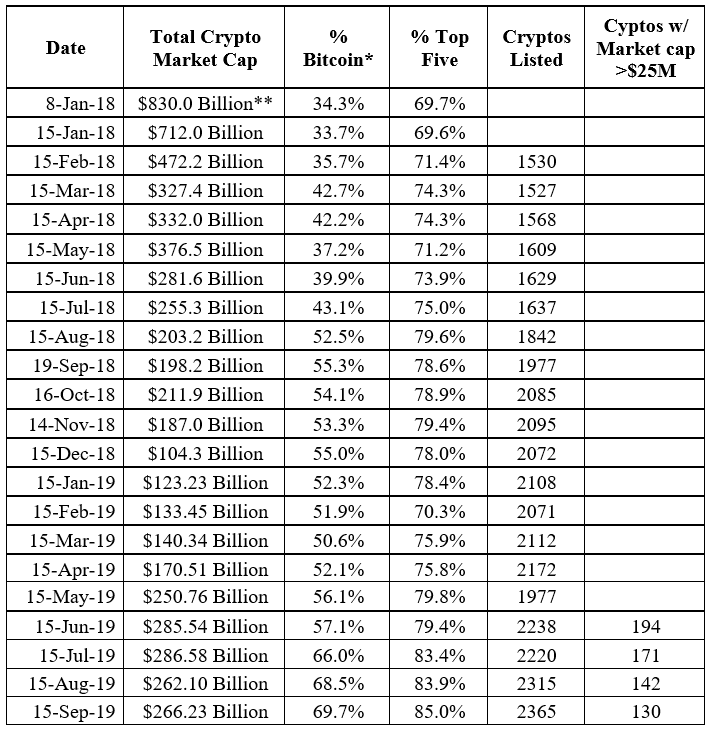 * Bitcoin was as high as 90% of the market cap of all cryptos at the beginning of 2017 to as low as 32% at the top of the market. Part of the difference is that there are now nearly 2000 cryptocurrencies. So the number keeps going up even though the market cap goes down. BTC is now at 69.7 and the top 5 are 85% of the market cap.
** This was the peak of the crypto market in terms of market cap. Data via Tama Churchouse, Asia West Investor email on 4/11/18

If we look at the first section of coins, then:

This month we are following 102 crypto. None of them are strong bull. Only four of them, including BTC, are bull. 18 more are neutral. And 80 of them are bear or strong bear. It sounds a bit like 2018, but it’s not. My belief is that the altcoins are being affected strongly by US investors being shut out of much of the altcoin market. It’s still the wild-wild west out there and it was clear to me that Binance was manipulating the market knowing that many US investors would be selling. Eventually that sort of thing has to stop, but it will probably continue in markets outside the US.

The following chart shows the 15 top and bottom cryptoassets. 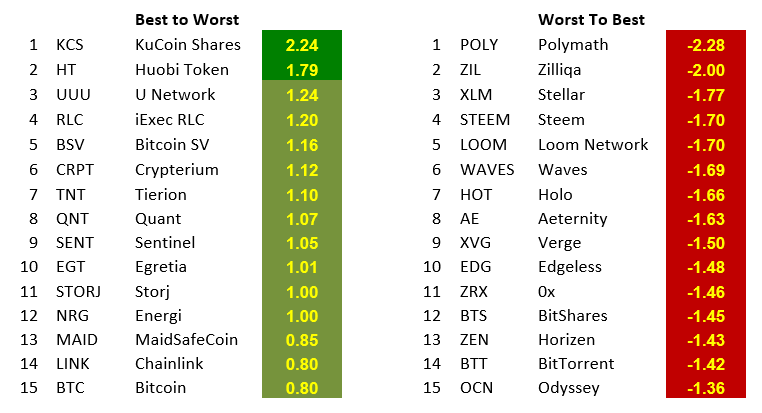 Notice that BTC is the last bull coin (after that they are all yellow). Notice too that the two top tokens represent major exchanges. BNB should be up there as well but because Binance just closed its current exchange to US investors (losing 25% of their volume), its coin is weaker. BNB is now rated strong bear at -0.77.

The following table shows what is going on with the overall market. 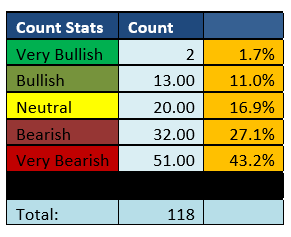 We have 15 bullish coins, 20 neutral coins, and 83 bearish coins. This is not a market for bulls in the altcoins yet.

The Big Picture with Cryptoassets

This is the year that I expect significant institutional involvement in cryptoassets. I’ve said most of this information in prior newsletters, but I’ve updated some of it. Here is what’s going on right now and in the coming months:

In May of 2020, the BTC protocol will only allow half as many new coins produced in each cycle. The average block generation time is about 9 min and 20 seconds. Right now, 12.5 BTC are mined in each cycle, but on May 27, 2020, that will drop to 6.25 coins per cycle. This means the supply of new coins will drop just at the time when institutions will be wanting them more. BTC usually rises about 200% in the year prior to a halving, however, I would expect the rise to be much greater in a roaring bull market which is possible for 2019-2020.

Institutions want to own BTC because they see it as a totally uncorrelated asset. So when it becomes possible, I expect them to put 2-4% of their assets into cryptoassets. That could drive the market cap for cryptos into the $3-5 trillion range. That translates into at least one more very big move in cryptos.

Furthermore, newsletters are starting to talk about the death of fiat currencies. First, they note that central banks are buying gold like crazy (which is part of the gold rally). Gold is up maybe only 20% versus BTC which is up 300% this year. In addition, many countries now have negative interest rate bonds. In other words, people get paid to borrow money. This is not sustainable.

One newsletter has been scaring readers with the threat that a new bill in congress will outlaw cash and therefore wipe out savings (I think the bill is supposed to come up this month). Why? If banks start charging negative interest rates, then everyone will have to pay to keep their money in a bank. That means people would be withdrawing their money from banks like crazy. Hence the need to outlaw cash. While I think this is just a scare tactic to sell newsletters, I also consider it to be a possibility in the future which makes cryptos even more attractive. Cryptoassets really are a good alternative (probably better than gold) for a fiat currency bubble.

As you have probably heard, Facebook recently introduced a new crypto token which it calls Libra. Facebook creating its own form of money shows how cryptos have the potential to change everything including power structures. Old money and current power structures, however, are not going to give up easily. Because cryptoassets are an institutional revolution, several things may happen –

More currently and actually happening right now, Binance’s departure from the US market for many altcoins is having a huge effect on the crypto market. I own CND, an artificial intelligence coin that gathers opinions and shares predictions with those who own a sufficient number of the coins. This is not a recommendation for that coin – or any other – but rather just an illustration of what is going on in the market. The people behind CND (a Russian group) claim their accuracy is now about 68% on their predictions. (They have a prediction right now that BTC will trade above $10,771 before it trades below $9,926 with a 79.6 rating – quite strong). Their goal is to have many hedge funds using the coin which could drive prices as high as 1000 times the current price. It could be a disaster if US Citizens could not trade it. Because of what is going on with Binance ending trading in many altcoins, right now CND is below the issue price of one cent per token. It takes a million tokens to get the highest level of prediction so right now, that’s just a $6800 investment. I asked the CND people (through Telegram) what will happen when Binance ends trading in CND (which has already impacted the price). They told me about the new Binance for US Citizens, however, they could not guarantee that CND would be a listed crypto and from what I can tell, it doesn’t look like CND will tradable. So, expect a bear market for anything you cannot buy in the US – and that’s most of the altcoins and especially something like CND. I decided to keep my CND because I can still buy or sell it on the Kyber Network.

In addition, I also own HOLO (HOT). US citizens cannot trade HOT anymore but I decided to keep mine. Why? Binance US has said it expects to list HOT in the future. In addition, many exchanges trade HOT around the world even though there is no exchange in the US. Keeping both CND and HOT is a gamble I am willing to take.

My Beliefs About Cryptoassets

Binance’s departure from the US is a good example of the context changing (belief #7).

Remember that the purpose of this report is not meant to give investment recommendations or to be predictive in any way. It is meant only to give you a status quo of the cryptoasset markets.

Until October 15th, this is Van Tharp.