Welcome to month nine of the Covid-19 pandemic and a presidential election outcome that has most people scared – no matter who you prefer. It’s called operating out of a low level of consciousness and that can bring on a lot of problems. There is no sign of the pandemic getting any better or safer and it looks like the third wave is starting. The United States has more than one new Covid-19 case per second and the total cases amount to about 9.4 million. Of those, we now have about 231,000 deaths. Translated, that’s about 2.8% of the US population who have caught the virus and of them, about 2.4% have died.

I keep wondering how the stock market has been able to go up and stay up while we are in the worst economic crisis since the Great Depression. My guess is that the Federal Reserve is propping up the stock market. But I’m now keeping track of bankruptcies and foreclosures to get a better picture. I would also expect more riots, etc. with so many people unable to pay their bills.

Most of the up movement in the stock market has been in the NASDAQ 100 and it’s due to certain key stocks which make up a large percentage of the NASDAQ 100 and the S&P 500. Many of those companies are likely to face anti-trust lawsuits in the near future so who knows if those gains will continue in the future. 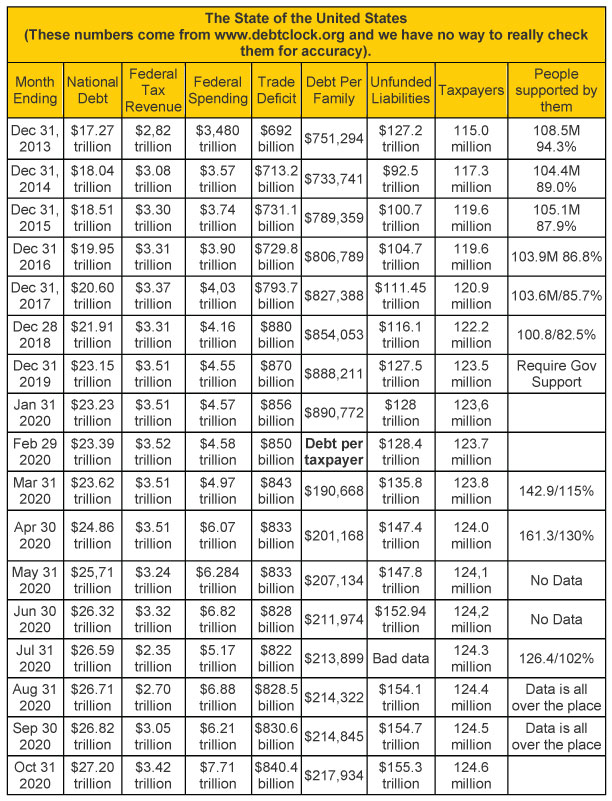 Notice that the federal debt increased from $21.9 trillion in December 2019 to $27.2 trillion at the end of October. That’s an increase of $5.3 trillion (almost 25%) in 10 months. Also, notice that federal spending is more than about $4 trillion higher than federal income — and that will get much worse. The government started manipulating this data last month. The unofficial debt went from $153 trillion to $80 trillion and now is listed at $155.3 trillion.

I started tracking data in two more tables which indicate how severe things are getting. This first table will track bankruptcies, foreclosures, and employment figures — bankruptcies are getting worse but employment is improving.

The second table will track money supply figures, credit card debt, and the number of millionaires – Notice that bankruptcies are up a little, foreclosures are down a little (but the Fed owns nearly 1/3 of all US Mortgages now). Unemployment has improved by about 3 million and we have about 50,000 more millionaires in the US than we did last month. They make up about 5.5% of the US population.

So now our measured periods range from Bear to Neutral.

Let’s take a look at the weekly bar chart below for the S&P 500. The question now is will the Fed’s unlimited bailout make that March low the bottom or have seen just the beginning of something very nasty – or a great opportunity for traders who know what they are doing. The market made about a $7 trillion recovery since the bottom and was setting new highs. The S&P made 15 all-time highs during the month of August, but the last new high was September 2, 2020. At this point, I expect that COVID-19 will be with us for a couple of years and the huge impact we’ve seen so far will just be a drop in the bucket by the time it’s over. You can also see that October was not very kind to the markets. 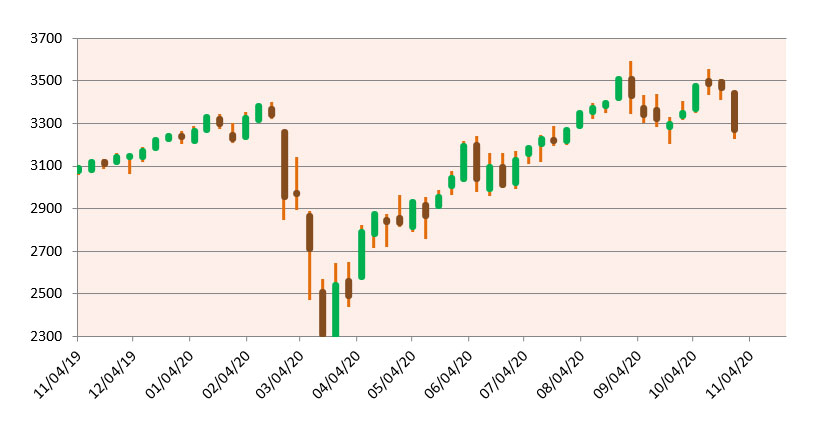 The chart below shows the extreme changes in the market type direction which occurred quite suddenly – the fastest I have ever seen. Look at the huge change since mid-July and then return back to neutral last month.

The next chart shows the volatility measurement for the last twelve months. Volatility had been in the quiet zone for months at the beginning of the year, and then suddenly it went to volatile on its way to very volatile in March. We have ranged from a quick dip into quiet to volatile over the last few months and are now back up to volatile.

The next table shows the weekly changes for the four major stock indices for the last month and recent annual closing prices. The Dow is down about 7% in 2020. The S&P is up barely (about 1%) while the NASDAQ up nearly 26.56% on the year. It’s the AAPL, Amazon, Google, Facebook, Microsoft phenomenon that I talked about early – money is flowing into a few stock, but those stocks heavily influence the NASDAQ 100. Small-cap stocks have been crushed with the Russell 2000 down 7.8%. 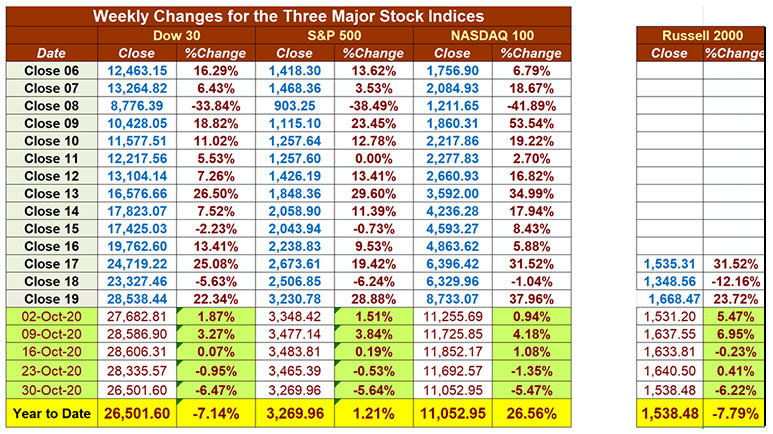 Three components of the model signaled inflation in October again. 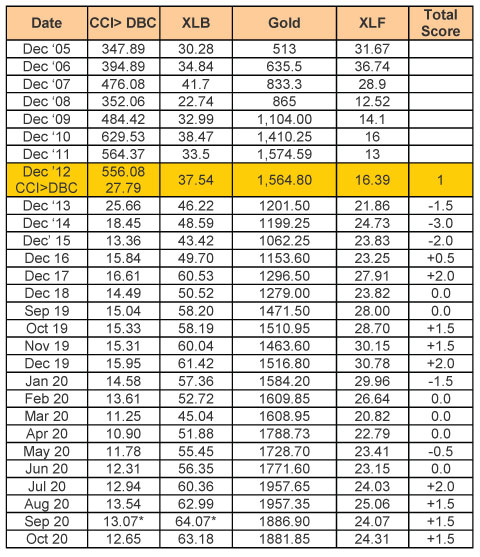 For the last several months, inflation has been showing up in our model.

Shadowstats.com adjusts the GDP by the original inflation calculation suggests that we have been in a recession since 2000 with just one-quarter of non-recession. The US GDP from April to June plunged 34.3% on an annualized basis – that’s the worst drop ever. But stocks are in a strong bull market and we’ve had a slight recovery in the GDP? According to Shadowstats.com, the real GDP data is even worse.

For the last several months, inflation has been showing up in our model.
Shadowstats.com adjusts the GDP by the original inflation calculation suggests that we have been in a recession since 2000 with just one-quarter of non-recession. The US GDP from April to June plunged 34.3% on an annualized basis – that’s the worst drop ever. But stocks are in a strong bull market and we’ve had a slight recovery in the GDP? According to Shadowstats.com, the real GDP data is even worse.
Part IV: Tracking the Dollar
USD closed at about 103 in March. On Nov 3rd, 2020 (Election Day), it stood 93.36 at 11:50 am.
That’s a ten-point drop in six months. Our World Market Model (see the second article below) has the US dollar ETF (UUP) now brown but no longer on the bottom 15 ETFs list. 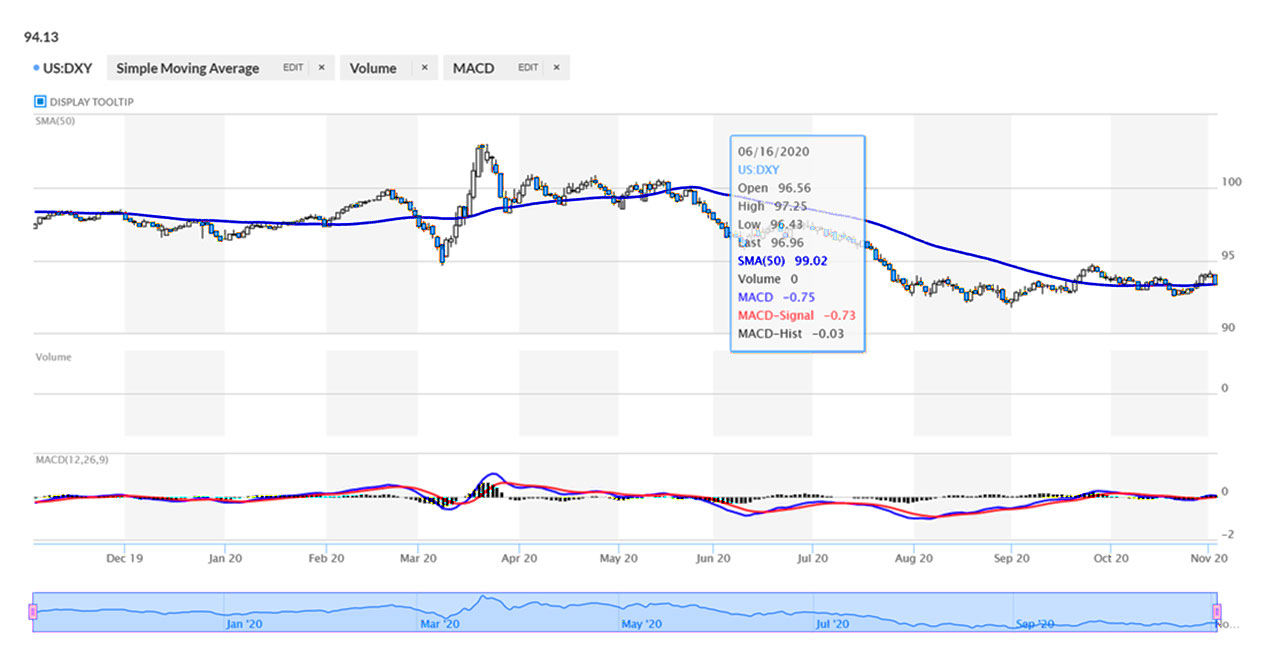 We have had a worldwide economic and market crash because of the Coronavirus. After some improvement and re-openings, much of the world is returning to partial or total lockdowns. The UK is going into a total lockdown for at least a month. The US is quite different; Donald Trump implies that he will fire Fauci a few months after he is re-elected. The philosophy, I guess, is let’s have everyone catch it – it’s not so bad – and then end it all. Apparently, a new hybrid strain of COVID-19 has come into play from Europe which is much more contagious – but fatalities are about the same. So is the Trump philosophy even possible – are people who have had COVID-19 immune to new strains of the virus?

What’s interesting is how many different interpretations are around about how this will all play out. The good news is that antibody testing seems to suggest that about 10% of the US population now has antibodies. We are looking for about 70% immunity before this is over. Thus, a lot of people may have caught it already and had no symptoms. As we’ve heard, for example, people with Type O blood will have the least problems (my wife is an example), and people with type A blood (me) will have the most problems.

At the start of the pandemic, politicians spent government money massively but I don’t see any new government loans for businesses and the help to individuals is drying up. COVID-19 could be a major problem until the end of 2021 – but if it is, many, many things are likely to change for Americans after the elections this week.

Reagan was the oldest president ever to enter office and he ended up becoming senile by the end of his 2nd term. Trump was not that much younger than Reagan when he was elected in 2016 and Biden is 77 years old now. It’s interesting to me to hear a 74-year-old say that a 77-year-old has almost lost it and thus isn’t qualified to be president.

As I mentioned last month, three presidents – G.W. Bush, Bill Clinton, and Donald Trump are all the same age. They were born in 1946 – the same year that I was born. Perhaps 2024 will be my time to run for president at 78 – haha!

Staying at home and limiting your contacts to only a few people is essential for now. This is also the best time possible to get a financial education and work on yourself. We are here ready to help with books, eLearning courses, and online workshops.

Until next month, I’m not going anywhere, this is Van Tharp.