First, Biden defeated Trump, so what can we expect? Probably better relationships with most other countries and hopefully, a massive effort toward green energy and an effort to ameliorate the impact of global warming. I would expect to see changes in health insurance–not for the better because, in my opinion, the problems lie in allopathic medicine and its cost–not in how the huge costs are paid for through insurance or otherwise. We will probably get another round of stimulus checks and perhaps loans to corporations, and possibly higher taxes for those making over $400,000, down the road. We will also see a more humane approach to immigration – rather than one that sees immigrants as a threat to America. Lastly, the US will have a president who does not continually lie to the public. We will probably have a normal amount of political manipulations, but we will not have a president (I hope) trying to rewrite the rules to get more power.

All of these predictions, however, depend upon the two Senate seats in Georgia. If the Democrats win both then Biden can probably get most of the things that he wants. If the Republicans take at least one, then Biden will have to compromise a lot to get things done. We probably will not see higher taxes in 2021 – because I am sure Biden understands the additional damage that could do to the economy.

What else is going on? The stock market and cryptos are both booming. Because the Fed stimulus goes into the markets, not the economy. That is probably likely to continue under Biden because the Democrats really want to help those out who are suffering from COVID-19. Lastly, I expect restrictions due to COVID-19 to last throughout 2021.

Right now, COVID-19 cases are setting new records. As of December 3rd, we have had 14 million cases in the US and 274,000 deaths. Those numbers represent 4.3% and 0.08% of the population, respectively. I know of two people who have had it and only one of them is from the US. That’s why some Americans don’t take it seriously, especially when the average person weighs the risks and rewards of the situation. Let’s see I might be sick for two weeks, a remote chance I’ll die, versus I can’t work or do the normal things I want to do to have fun. But the real problem is that our hospitals are full of serious cases and there is not room for more. 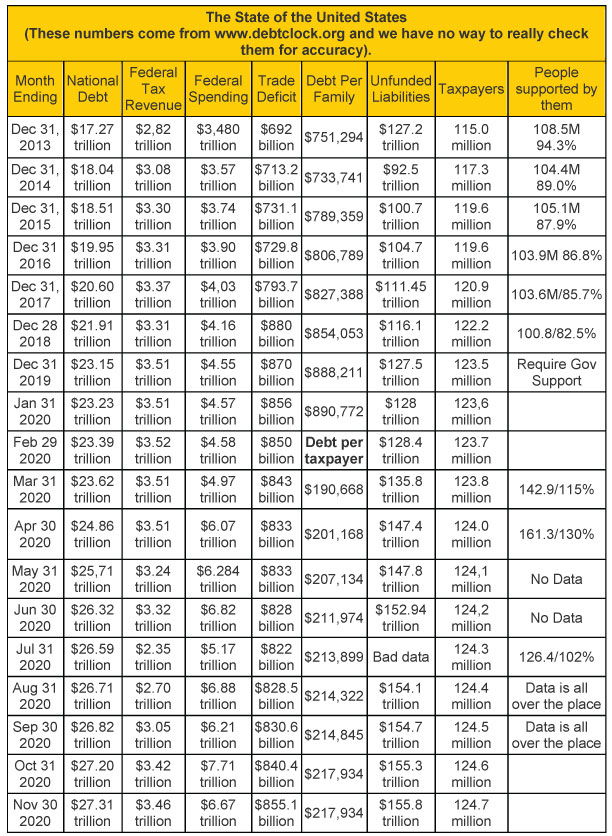 Notice that the federal debt increased from $23.15 trillion at the end of last year to $27.3 trillion right now. That is an increase of $4.15 trillion (almost 25%) in 11 just months. Also, notice that federal spending is more than $3 trillion higher than federal income now—and that will get much worse. I noticed the government started manipulating this data two month ago. The unofficial debt went from $153 trillion to $80 trillion and now it is listed at $155.8 trillion.

I monitor the Market SQN for timeframes from 5 weekly bars to 40 weekly bars. If you look at the price chart pattern for each of those periods, you can probably tell the direction.

So now our measured periods range from Neutral to Bull.

Let’s take a look at the weekly bar chart below for the S&P 500. The market made about a $7 trillion recovery since the bottom and was setting new highs. The S&P made 15 all-time highs during the month of August and started making them again towards the end of November.

The chart below shows the extreme changes in the market type direction, which occurred quite suddenly in the last twelve months– the fastest, I have ever seen. Look at the huge change since mid-July and then return to neutral last month, and now we are bull again.

The next chart shows the volatility measurement for the last twelve months. Volatility had been in the quiet zone for months at the beginning of the year, and then suddenly it went to volatile on its way to very volatile in March. We have ranged from a quick dip into quiet to volatile over the last few months and are now back to the normal range.

The next table shows the weekly changes for the four major stock indices for the last month and recent annual closing prices. The Dow is up again now at 4% for the year. The S&P is up 12% while the NASDAQ up over 40% on the year. It’s the AAPL, Amazon, Google, Facebook, Microsoft phenomenon that I talked about earlier – money is flowing into a few stocks, but those stocks heavily influence the NASDAQ 100. The small-cap stock index has been crushed for most of the year, but it’s up this month. 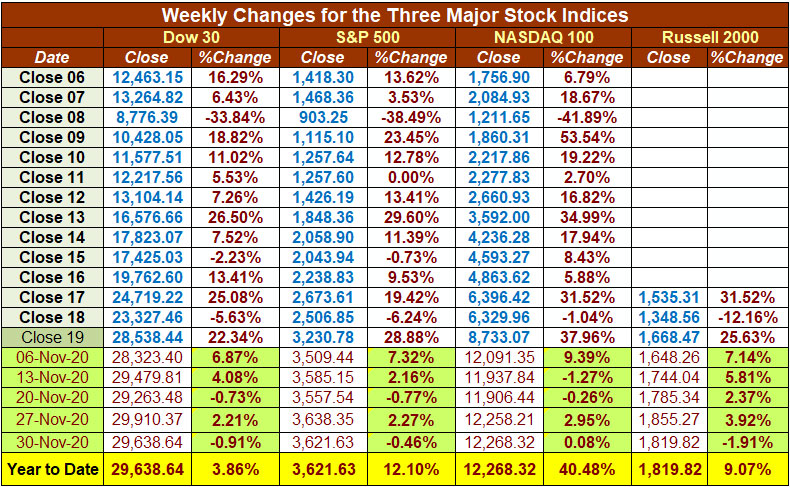 Three components of the model signaled inflation in November again. 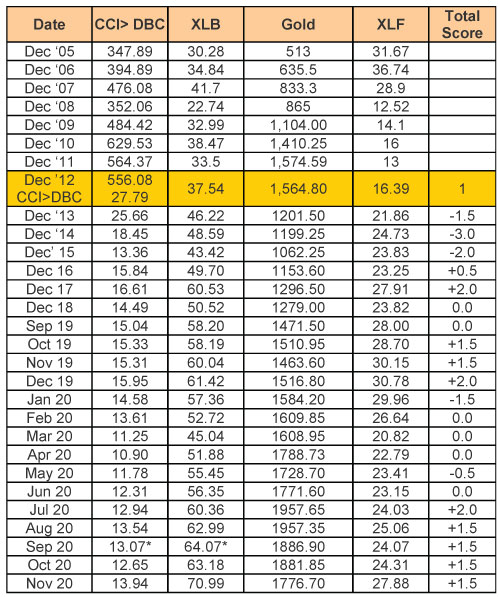 Shadowstats.com adjusts the GDP by the original inflation calculation suggests that we have been in a recession since 2000 with just one-quarter of non-recession. The US GDP from April to June plunged 34.3% on an annualized basis – that is the worst drop ever. However, stocks are in a strong bull market and we’ve had a slight recovery in the GDP. According to Shadowstats.com, the real GDP data is even worse.

USD closed as high as 103.61 in March but by midday on December 3rd it stood at 90.59. That’s a 13-point drop in six months and it has dropped 3% in the last month. Our World Market Model (see the second article below) has the US Dollar ETF (UUP) now red and it’s the 3rd worst performing ETF of the 500 plus that we track.

We had a worldwide economic and market crash because of the Coronavirus. After some improvement and re-openings months ago, much of the world is again weighing lockdowns. We have a new president but still do not know if he’ll have enough votes in both houses of Congress to get anything significant done.

Staying at home and limiting your contacts to only a few people is essential for now. This is also the best time possible to get a financial education and work on yourself. We are here ready to help with books, eLearning courses, and online workshops.