During the 15+ years that I have known Van personally, a lot of things have changed in my life. As you likely know, the Van Tharp Institute stands for “personal transformation while using trading as a metaphor.” Over those years, I can say that I have transformed as a person on many different levels – psychologically, spiritually, as a trader, a teacher and as a coach. Mission completed!

How I Met Van

During the early 2000’s, I was working for Corporate America at one of the world’s biggest asset management firms of which PIMCO (Pacific Investment Management Company) is a part. Working very long hours, I was climbing up in my corporate career, frightened to not make the next step higher and stretching my energy levels well beyond what was healthy. Completely exhausted, I could feel that I was just not happy despite a growing career and making lots of money. Clearly I had to change something. Looking back, the time was ripe to meet Van!

We met first in London in 2007 during a VTI Workshop that Van taught. Health-wise he was not doing well—breathing heavily. I even feared he might collapse on the stage (things turned around and he recovered and lived many more healthy years). It was here that I heard about the Super Trader Program. I was intrigued to join before it was too late. With that motivation, I graduated in 2010, within two years, by developing the systems I teach today in my workshops. The Super Trader Program was the ideal springboard to prepare for getting free of my golden hand-cuffs, leaving the coziness of the corporate world.

In 2008 Van was teaching in Germany and we met again spending a couple of days together. I showed him around the nice places of Munich (the place I lived in) including visiting the famous beergarden in the English Garden to have a big glass of German beer.

In 2008 Van was teaching in Germany and we met again spending a couple of days together. I showed him around the nice places of Munich (the place I lived in) including visiting the famous beergarden in the English Garden to have a big glass of German beer.

Van’s Impact on My Life

During those years back, I was very competitive at work—playing the rat race, striving for results in a desperate way to seek approval and justify my worth. In hindsight, that was not a very clever strategy (and for trading, it is a recipe for disaster). So during one of those days, I found myself sitting with Van on the sofa of my cozy apartment talking about trading and things “clicked”.

I had to change if I wanted to reap my full potential.

During the Super Trader Program, I started my journey of “feeling the feeling and letting the charge go.” Working on limiting beliefs, especially the emotionally charged beliefs, had a very gratifying effect when a charge went off. There is a certain surge of energy that can be experienced each time a layer is taken off. Suddenly, there was a feeling of lightness as if a heavy weight was lifted.

All in all, working closely with Van over all those years, my thinking has completely changed and a huge amount of limiting beliefs got released. It is interesting that, when going over again my earlier list of beliefs, things have changed in fundamental ways so that it is difficult to get back into that seat putting on the heavy shoes.

Becoming an Instructor at The Van Tharp Institute

After having graduated from the Super Trader Program in 2010, Van asked me if I wanted to teach a workshop based on my systems. I enjoyed teaching and experiencing people grow and have been more than happy to do so to this day.

After Van’s passing, I honor him and his contributions by persevering and continuing to transform myself and others to carry on his legacy. I miss him a lot and am grateful to have met him.

His last inspiring words just a couple of days before he passed away:

“I have no fears at all of transitioning, and ‘the what is’ is perfect!”

Van was not only a mentor & coach to me, but a father and friend!

Rest in peace, happy, till we meet again…

The peace (of God) is shining in me now. Let all things shine upon me in that peace. And let me bless them with the light in me. 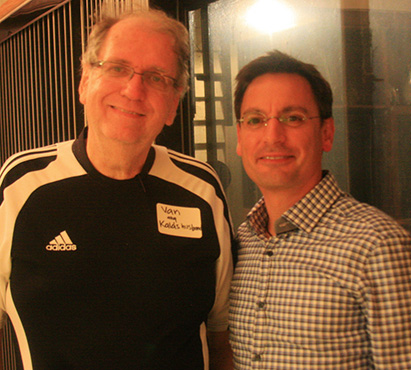 Great story Gabriel. Thoughts of Van are with each one of us every day.
How come I didn’t get an invite to the beers in Munich in 2009 ? Looks great fun !!
Martin .