Stepping back from the US equities, let’s start this month’s update with a look at the markets globally via the World Market Model.

The model uses Van’s Market SQN® methodology which evaluates trend and volatility for the last 100 trading days in a single score. He added colors to help with a quick indication in the model about how each market is performing. The model uses ETF symbols as proxies for what’s happening in the markets.

As you look at the following table, what color/colors do you see primarily? 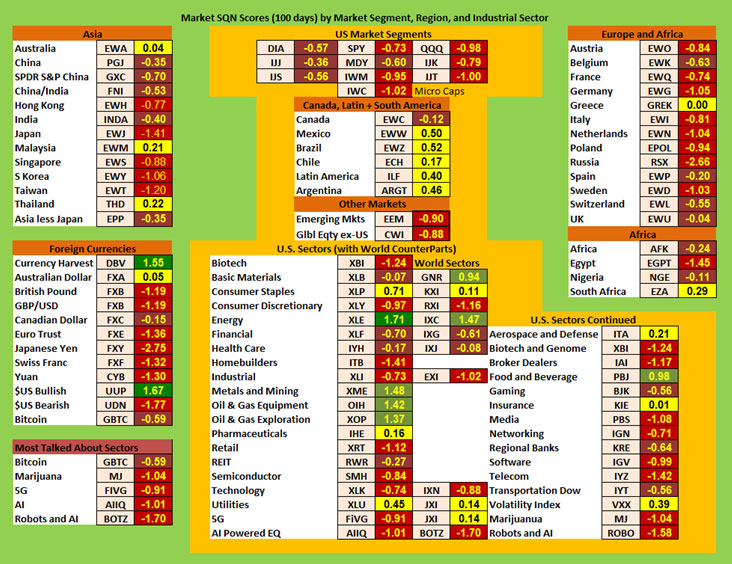 Across the top half of the table, we can see that red and brown dominate the equity markets in Asia, the US, and Europe/Africa but there’s one geographical exception. Red and brown represent bearish market types so we see lots of down equity markets for the last 100 days (since the beginning of December) except for Central and South American Markets. Those equity markets are weak, but, they are positive. Why might this be?

Another key point to notice in the model is in the currency table on the left. The Currency Harvest ETF is doing well but nothing else is except for UUP – the US Dollar ETF – at 1.67. The dark green color signifies a very strong score and affects everything else in the model. In a section further on in this article, we’ll look at how strong the USD looks on a bar chart.

Among the equity sectors, we see the only green in Food & Beverage, Energy, Oil & Gas, and Mining. Part of that theme shows up in the commodities table below. 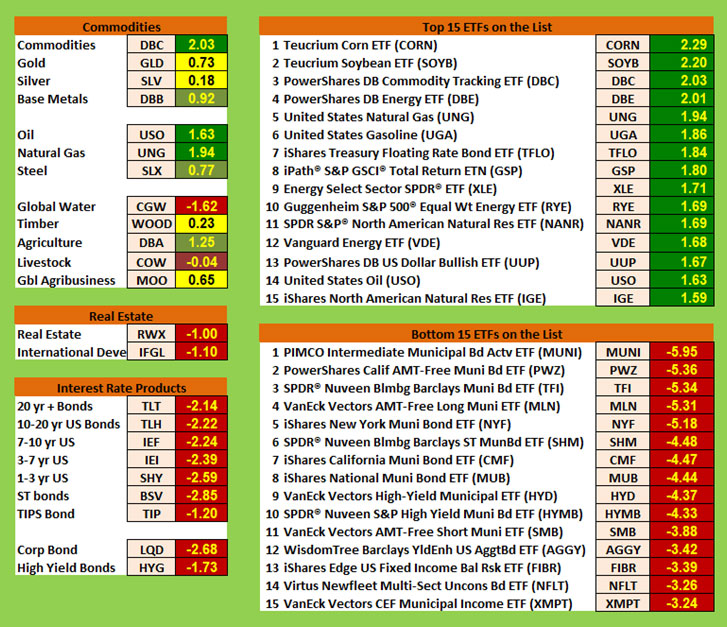 Only two of the 12 commodity ETFs are negative and the rest are positive. “Stuff” is up, which is another way to say inflation. Meanwhile, real estate and bonds are down across the board.

The top 15 scores in the database go to “stuff”-related symbols. Actually, something like the top 40-50 symbols on that list are almost exclusively stuff-related. What’s on the bottom? Muni and bonds. And, that group extends up from the bottom 40 or 50 symbols as well.

The bottom scores seem abnormally weak in large part because the volatility on muni and bond ETFs is so low that when a normal-sized pullback occurs (by say an average amount in other markets), the Market SQN score winds up being super bearish. Go look at one of those price charts, however, and you may wonder what the big deal is for such a horrible Market SQN score.

The world market database is 10% bullish and 78% bearish.

What are some of the primary factors affecting the big picture right now?

April was a down month for equities in the US and now, all of the different periods are in market type alignment:

You can see the four big red bars from April on the right of the weekly chart for the S&P 500. 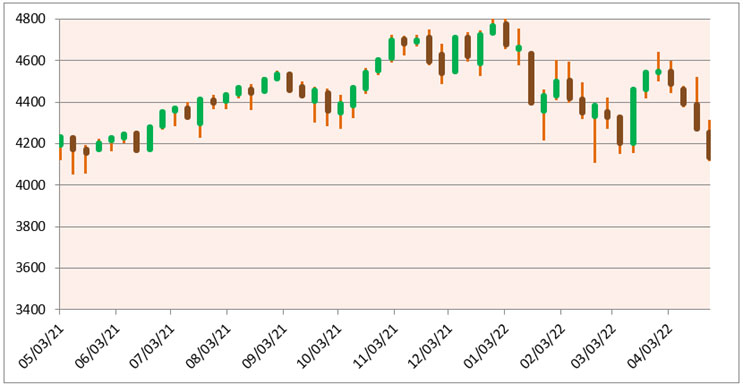 The market type has been in bearish territory for the last two months and is now flirting with falling into Strong Bear.

All four major US equity indices were down for the first quarter and then fell more in April. In the table below, you can see the NASDAQ losing 3-4% per week in April. At 21% off the January 1 level, the index is in a bear market by the traditional measure. The other three major indices dropped in April as well but not as much as the NASDAQ. 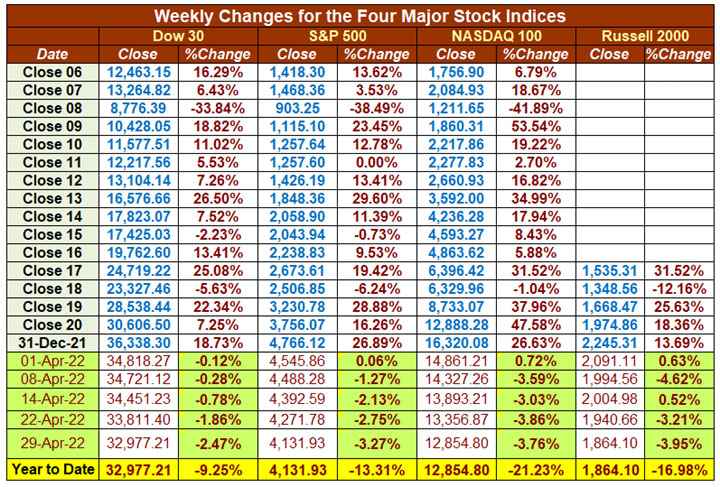 Not only does Van’s model signal inflation, but it also announces another month of strong inflation (as it has for some time now). I don’t recall the model giving these kinds of scores as long as Van has been publishing it. Maybe that’s not so surprising given that the official inflation rate is the highest in four decades.

USD continued to increase its rate of ascent in April, closing at $102.96. The daily bars above show a rise in the index. This current level, however, may now meet some resistance as $104 was tested twice previously in recent years (see the weekly bar chart below going back to 2016). Will USD break through $104 or fall back again this time?

We don’t know. And further, this update does not try to predict. Better to understand where we are and consider reasonable ideas about why conditions are so to help frame our trading now.

Trying to trade predictions is a high-risk exercise but giving some thought to likely scenarios has great value. Here are some simple possible scenarios to consider:

As part of your big picture process, these factors can help you understand what’s happening and better think through what might happen soon.

Ray Dalio published an article within the last week which was interesting in several regards. First, he seems to understand the value of useful beliefs. He said about ten years ago, he thought a solid understanding of bubbles would be useful. He studied historical data to find a model of repeated patterns which strengthened his beliefs about bubbles. Now he applies that bubble model where applicable.

Dalio believes that tech stocks have been in a bubble recently and now that bubble has popped. So, is the Nasdaq decline over at this point? Not necessarily. In reverting to the mean, Dalio also understands that prices often far overshoot fair value which means the tech decline may still have quite a way to go.

As the manager/former manager of the world’s largest hedge fund, does Dalio sharing his well-developed beliefs about bubbles constitute a tech sector trade? Well, that depends. Applying certain Tharp Think principles alone, Dalio’s insights are insufficient to make a trade but they do make good input for your big picture process. Also applying Tharp Think principles, if you have developed rules for a full system that trades (with appropriate risk management) macro scenarios, then perhaps that is tradeable information. Which is the case for you?