Going by the numbers, markets and the economy are doing great. The Dow, the Nasdaq, and the S&P 500 all broke several records last week. All three indices closed at all-time highs on Friday afternoon.

But if you turn to the news, the picture looks much less rosy with no shortage of bad news for the US and the global economy.

For now, the strength of the U.S. economy outweighs these concerns but on the horizon, there’s definitely a “wall of worry”.

Climbing A Wall Of Worry

You may have heard of this “wall of worry” term which originated in the 1950s. If you have wondered what it really means, Investopedia explains the term this way:

“Wall of worry is the financial markets’ periodic tendency to surmount a host of negative factors and keep ascending. Wall of worry is generally used in connection with the stock markets, referring to their resilience when running into a temporary stumbling block, rather than a permanent impediment to a market advance.”

Overcoming one of these market-squelching impediments (or even postponing dealing with them) gives the market a temporary shot in the arm. Bull markets are built when many of these obstacles are overcome in a series, over time. Thus the image of climbing.

Since President Trump’s election in November 2016, markets have been operating under the “Trump growth narrative.” This is the idea that Trump’s pro-business and market-friendly policies would give a boost to stock prices. Except for a few hiccups, the markets have largely cooperated: 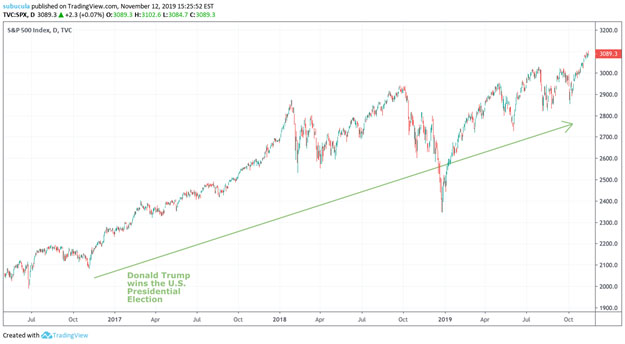 But traders are growing increasingly concerned about that narrative and the key worries won’t come as a surprise: trade and China. We’ve talked a lot about the tit-for-tat tariff dispute with China recently but the short of it is this: President Trump’s tariffs on Chinese materials and goods and the threat to impose even more has the potential to convince China to agree to a better trade deal. In the meantime, the markets are stuck in uncertainty over exactly what will happen – and when. Of course, uncertainty is what the markets dislike the most, so this economic aspect makes a crucial part of the markets’ wall of worry.

For months now, the markets have been riding high on China and the U.S. delaying a final trade deal, breathing a sigh of relief and climbing higher each time increased tariffs were postponed or negotiations pushed back.
But this can’t go on forever.

Kicking the can down the road might not work “one more time” so negotiations are in full swing and both sides are setting expectations for a deal to be signed by year end. As a result, the markets keep rising and perhaps this issue may have been dealt with in a tangible fashion – but that will mean an actual trade deal signed – even it’s only a “phase one” deal.

To Climb Higher On The Wall

Bull markets don’t require everything to be peachy. Markets can rise even when news is mixed, as long as expectations are, on the whole, positive. That’s why traders talk of “climbing a wall of worry” – concerns and problems are fine, as long as there is a way to climb over them and keep rising. To keep running higher, this bull market will need additional progress on trade. But even if that worry is overcome, there are plenty more bricks in the wall of worry.

As we have discussed previously, the unrest in Hong Kong could end up hurting China’s economy. Any Chinese military intervention in Hong Kong, for example, could easily scare away investors and businesses from the country and lead to sanctions. That would be bad news for China’s economy which is already at its weakest in more than a decade and facing a trade dispute with the U.S. Any positive news out of the Hong Kong protests – meaning toward resolution, not necessarily toward the meaningful democratic reforms the protesters are demanding – would give the market a solid bump up as it climbs the wall of worry.

Meanwhile, the rest of the global economy is also struggling. Two issues to note in Europe:

In the past month or so, the market has shown that positive news (or the expectation of future positive news) has outweighed the negative. And with the historical seasonally strong last two months of the year underway, the probabilities are the market will continue to pop higher with each piece of positive news, especially around trade negotiations.

An accommodating Fed and an optimistic short to mid-term economic outlook in the U.S. are underpinning the “wall of worry” climb. So until something changes in those key fundamental components, look for stocks to be bid up when worrisome issues are overcome (or kicked further down the road).

Great Trading and God Bless you,

P.S. – The “Climbing the Wall of Worry” is a concept is built on interesting psychological underpinnings on how market participants understand and act on new information. We’ll dig into that concept in a future article. I always appreciate hearing your thoughts and comments! Send them to [email protected]