Last week, leaders from the U.S. and China effectively kicked any tariff tantrum down the road. This is likely going to be a long-running story but with that uncertainly moderated, a Trump’s tweet yesterday morning confirmed the posture (highlighting is mine):

So with no new tariff worries in the short to intermediate term, what will the market’s focus turn to?

We saw it in the price action that started this week’s trading. The short-term market pullback was because of… (wait for it…) a really good employment report last Friday. The economy had produced 224k more jobs vs. the 160k expected. On Monday and Tuesday, traders were full of angst that this good news could trigger the Fed to forego an interest rate decrease. Hence, good economic news became bad news for the market.

The “good economic news is bad for the markets” meme is the very obvious tell that this period’s dominant market narrative is going to be whether the Fed monetary policy will accommodate or tighten.

From a market narrative perspective, we can deduce that direct signaling of accommodative policy by the Fed is a good thing… but… many people have claimed that a 0.25% rate cut has already been priced into the market. So why the big pop this morning if Powell’s statement only confirmed what has been assumed? We get a clue from the futures market: 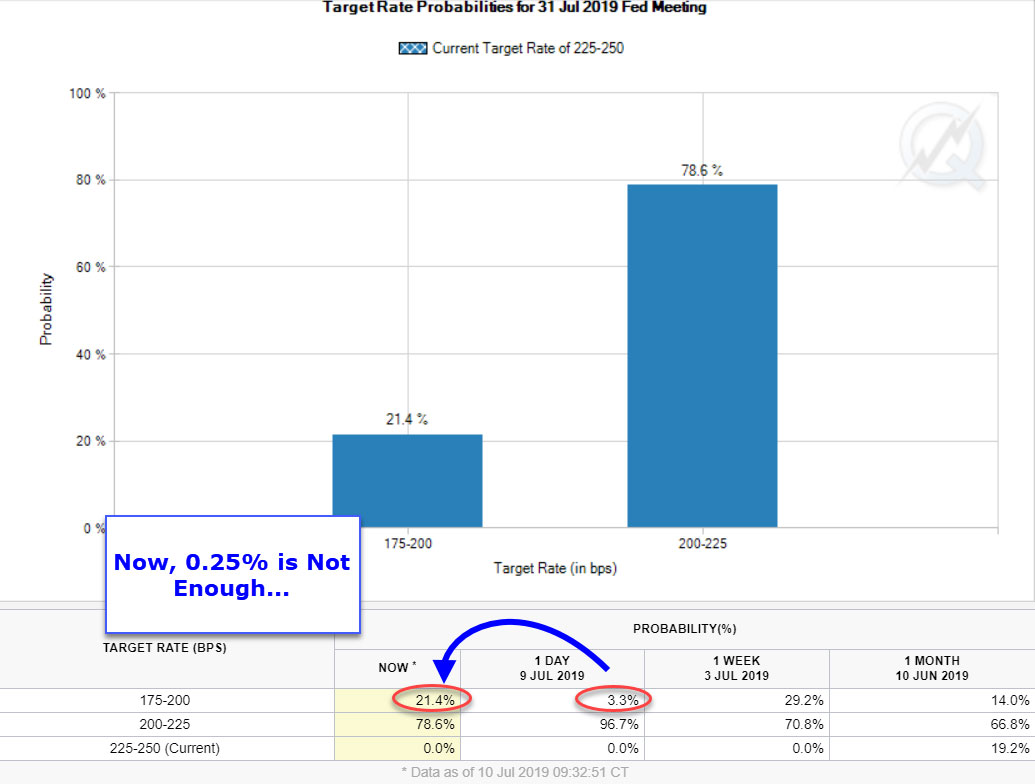 Yep — after the Fed released Powell’s statement, traders bid up futures contracts to hedge their exposure to future Fed rate changes. The probability of a 0.5% cut jumped from 3.3% to 21.4%!

Under this narrative, we are firmly in a “next number” market. Traders and investors will be applying their “good numbers are bad” and “bad numbers are good” filter to every significant economic number between now and the July 30-31 Fed meeting. So it might be instructive to see what important economic reports will hit between now and then. Here’s a fairly useful list of what’s coming up:

I have found that predicting Fed decisions has been a sum-zero game so I concentrate on reacting to what happens. But leading up to the July 31 announcement, there will be more market volatility than usual and I expect it to be slanted toward to positive side for stock market movements.

With the S&P 500 holding firmly above the June 21, 2019 all-time highs, pullbacks are to be bought. Since the June 3 market bottom, the strongest sectors over the past five weeks should continue to dominate: Technology (XLK), Communication Services (XLC) and Consumer Discretionary (XLY). One could do worse than expending your energy there …