Last fall, Van and I held a workshop called, “How Big Money Trades.” The purpose of this workshop was to teach students how the market works and who are the participants. By understanding the participants and their objectives, we can use their behavior to find strong edges in the market that we can exploit in our trading.

When is a trend a REAL trend?

A REAL trend lasts several months, and prices rise by 50-200% or more.

In “How Big Money Trades,” we talked about the role of the Commercial. The Commercial is the participant who is an expert in the product. They know everything about it.

I want to share some insights with you to help you improve your trading by understanding the opinions of the commercial user.

Occasionally, an environment emerges where this behavior is not the case. When this environment appears, explosive moves develop in the commodity. The reason for the move is that the Commercial is the one driving the movement.

In these scenarios, they are no longer price sensitive. They need to buy and will do so at any cost to stay in business. They end up in a challenging situation, pay absurdly high prices that make their business deals losers or default on their commitments to the customers. Either one is bad but defaulting to your customers is likely a death sentence.

The pandemic has created a historical situation. When the pandemic hit, demand collapsed at a record pace. Unemployment increased by almost 10x what it had been before the pandemic. The fear of what was to come put many businesses in triage mode to save themselves. These businesses laid off employees, liquidated inventory, and scaled back on all future commitments. This activity was all happening in the backdrop of US/China trade tensions and a move away from trade to more nationalist policies.

To combat the pandemic, governments and central banks injected record amounts of fiscal and monetary stimulus into the economy. The United States alone has injected over $8.5 trillion into the US economy.

This stimulus has gone searching for a home, be it financial assets (stocks, bonds, cryptoassets) or hard assets such as housing.

With so much money coming into the system and the economies turning around quickly, many businesses were pleasantly surprised when they started receiving an abundance of new orders. They were excited to accept this new business. However, new problems began to emerge quickly. As companies set out to fulfill their new contracts, they found themselves short inventory (because they had liquidated to prepare for the Pandemic). The shortage caused businesses to come to the market to buy the extra inventory to meet their obligations. This demand caused prices to rise quickly.

Exacerbating this issue were the trade tensions and logistical cutbacks that had emerged worldwide in the transportation infrastructure. There was now a shortage of shipping, rail, and trucking. In addition, movement through customs took longer, and the whole process slowed to a crawl.

As a result, we have seen prices of many commodities explode. Just look at these excerpts from Bloomberg – 5 Things to Start Your Day: 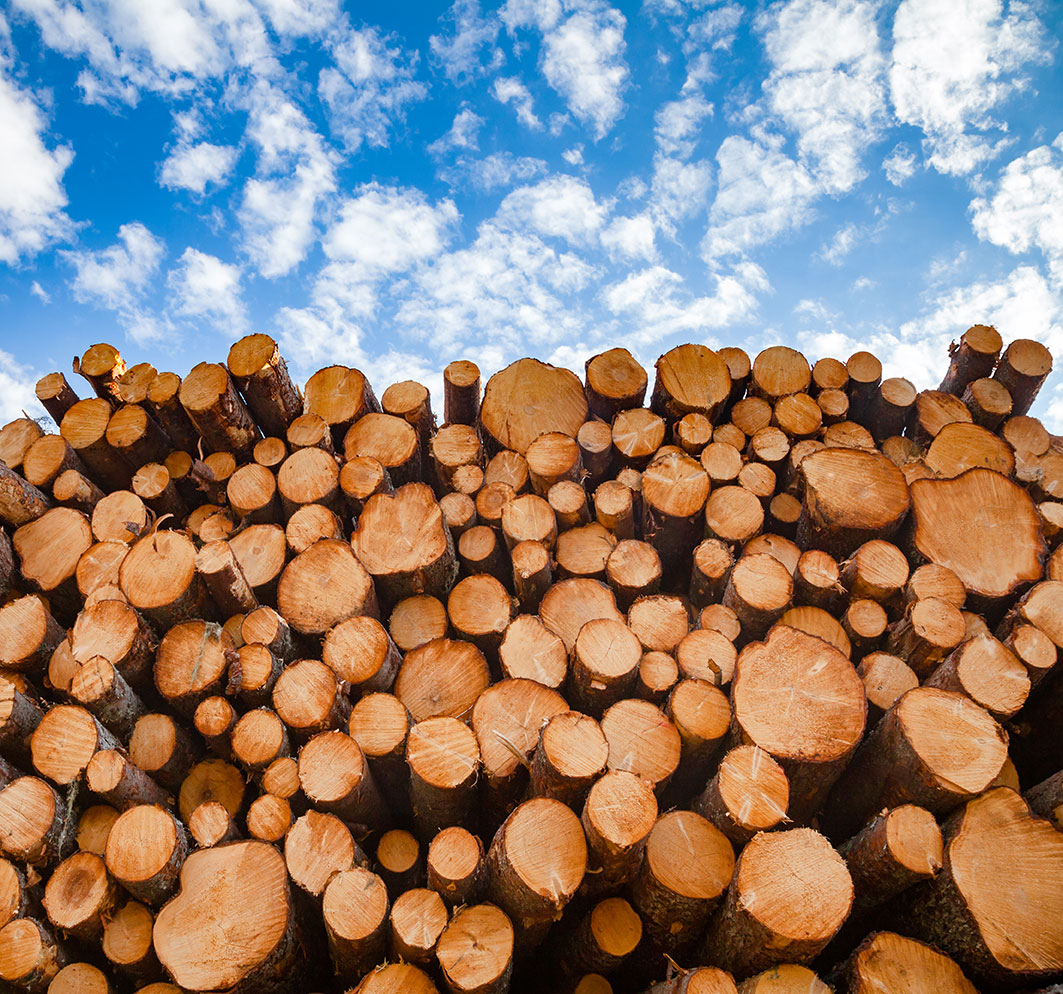 “But where we are seeing squeezes all over the place is in the real economy. In our recent podcast about the surging price of lumber, our guest Stinson Dean described a key driver of the boom, in that lumber dealers make commitments to deliver more lumber than they keep on hand:

“It’s a short squeeze. It’s from the dynamic of the sales model that lumber dealers… they’ll commit to deliver lumber, 60 to 90 days out sometimes…. they commit to these sales. Let’s just say 90 days worth of sales, the most inventory these folks can hold is 45 days because of cash constraints and kind of how they manage their inventory. When they’re bullish they’ll go 45 to 55 days. When they’re bearish, they’ll work their inventory down to 30 days. And if you think about that, you’re 50% covered, and you have 90 days’ worth of commitments and 45 days’ worth of inventory. So they’re buying on the open market. You know, they have their average costs of 45 days’ worth of inventory, but then they have to cover the next 90 days or excuse me, the next 45 days’.”

“Global supply chains are a mess right now, as everybody knows. At some point, balance will be found, but it could take some time.”

Brendan Murray, Enda Curran, and Kim Chapman have a great piece out on what it looks like when the world is running short of basically everything. This line helps explains why things are so out of whack:

“It’s gotten out of control, especially in the past month,” said Wolkin, vice president of operations at Atlanta-based Colgate Mattress, a 35-employee company that sells products at Target stores and independent retailers. “We’ve never seen anything like this.” Though polyurethane foam is 50% more expensive than it was before the COVID-19 pandemic, Wolkin would buy twice the amount he needs and look for warehouse space rather than reject orders from new customers. “Every company like us is going to overbuy,” he said.

So even though there may be a shortage of polyurethane foam and it costs 50% more than before, the impulse among end-buyers is to buy even more — out of fear that they won’t be able to get it in the future. And then if everyone is buying even more all at the same time, then that presumably makes the supply-demand situation even worse.

Also, the whole thing flies in the face of the notion that higher prices would naturally have a curbing effect on demand. As the above example shows, it’s done no such thing.

On the latest episode of the “Odd Lots” podcast, Tracy Alloway and I talked to Ryan Petersen, the CEO of the logistics firm Flexport, and we talked about exactly this: The so-called bullwhip effect, where a change in behavior by the end-buyer can ripple through the supply chain. This can cause all kinds of extreme adjustments by the time the order gets back to the original factory, making it nearly impossible to calculate proper production levels, even in the absence of a rapidly changing global economy.

On top of all this, when it comes to the transport side of things, actual space on the ships (which is scarce) can often be awarded in an arbitrary fashion, based on which manufacturers and buyers have the right relationships with the shipper. You really should listen to the whole discussion to appreciate the degree to which logistical problems compound on top of each other.”

During the inflation era, companies faced the fact that they didn’t know what their input costs would be, and in some cases, they couldn’t even get the material they needed. To counteract this issue, they held extra inventory, so they knew what their actual price input was for materials.

As inflation fell, companies began to embrace the “Just in Time” method of inventory management. With “Just in Time,” you only hold the inventory you need to maintain your business. It is wasteful to have more because you use up available capital to keep inventory that could yield a higher return somewhere else. “Just in Time” has been the standard for the last 20-25 years. Because of “Just in Time,” many companies are not prepared for shortages or inflation leaving them vulnerable to price squeezes.

All of this brings us back to the current situation. Commodities across the board are skyrocketing in price.

The “Commitment of Traders Report” has always been one of the greatest assets for a trader because it allows the trader to see what various market participants are doing. It also happens in a timelier manner than stocks because it is released weekly. Combined with market sentiment, we can get a good sense of when markets have gotten expensive to fair value or cheap.

Larry Williams has been a leader in utilizing the COT report. One indicator that Larry created that I think has great value is his WILLCO Indicator.

Williams WILLCO indicator shows the total Commercial Net Position as a percentage of Open Interest. WILLCO helps you understand just how much of the Open Interest the Commercials have; how intense their buying or selling has been.

It is fully explained in Larry’s book, Trade Stocks & Commodities with the Insiders, Secrets of the COT Report. Published by Wiley in 2005, it was the first book ever devoted to the COT Report.

The WILLCO Indicator is an excellent tool to decipher the behavior of the Commercial in the market. Combining WILLCO with sentiment gives a great view of the internal dynamics of the market.

To illustrate these concepts at work, we have recently seen extremely abnormal behavior in several markets that are creating these explosive moves. Here are two examples: 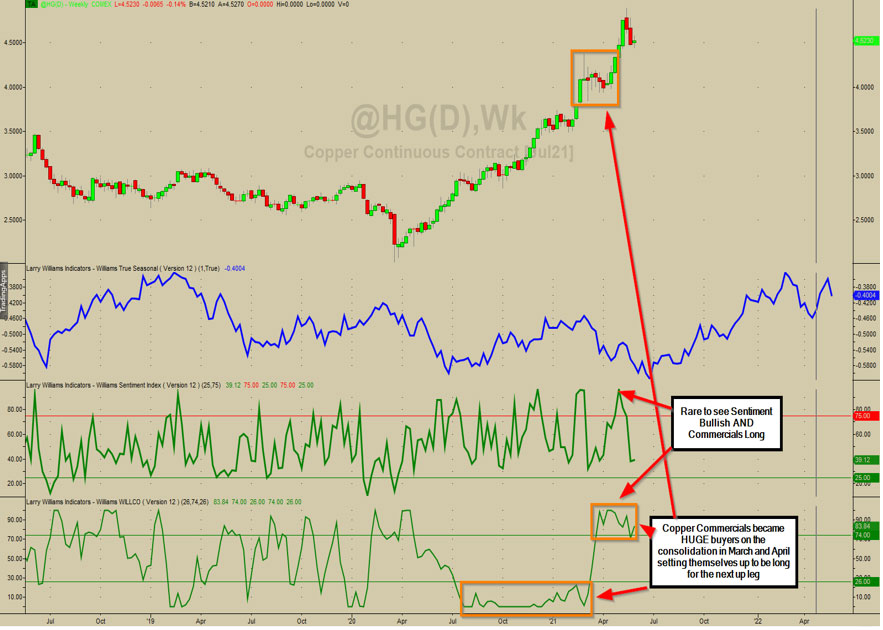 In the case of Copper, we see the commercials reverse their positions from record shorts to significant longs on a rally which is extremely rare. It is also happening while sentiment is strongly bullish, which is also rare. 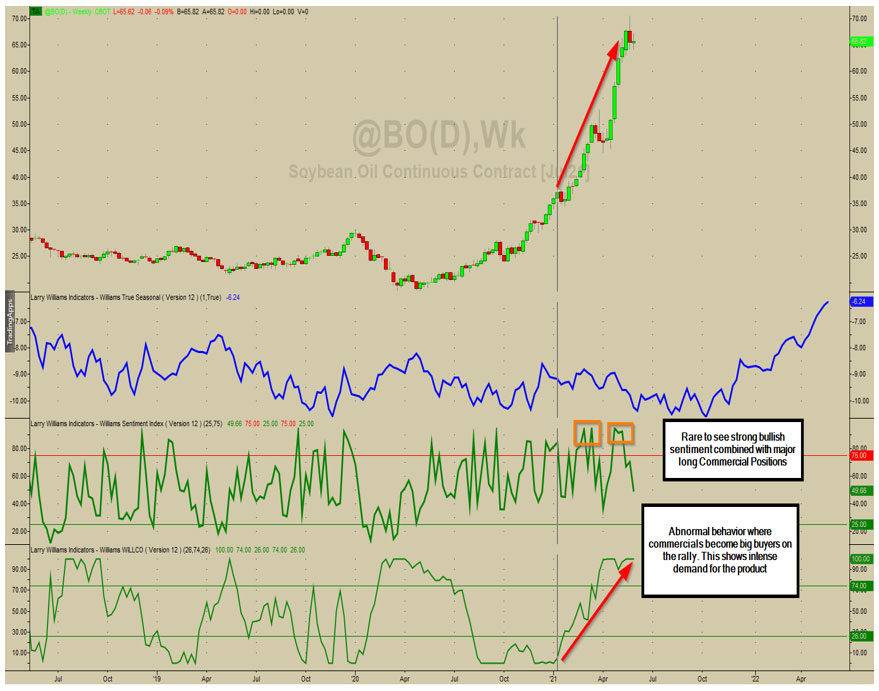 Soybean oil is also exhibiting similar behavior. We see commercials as consistent buyers taking their position from record shorts to large longs on a rally and bullish sentiment. Large Commerical buying combined with bullish sentiment is abnormal. Commercials usually sell and sell higher, not buy and buy higher as we see here.

Both charts show these trends likely have further to go because the Commercial has no interest in shorting them.

The Commercial usually leads the strongest bull moves for some fundamental reason. Remember, they know the most about what the product is worth, and if they have no interest in selling it, that tells you something.

Make sure to take the time to understand the behavior and incentives of the Commercials in the market. From there, tracking their behaviors combined with a technical framework can create opportunities to set up excellent reward to risk setups where Big Money is on your side.

For a summarized guide to Commercials and their place in the market, read Chuck’s Commercials Recap here.