Let’s take a look at the global situation (literally and figuratively) via Van’s World Market Model.

Asian equities are brown and red. All the US equity segments are brown. Europe and Africa are mostly brown and red. The lone geographic segment with all positive Market SQN scores again was the Americas (except for the US). Brazil really bucked the trend with a very strong score. So, unless you owned Central/South American companies, May was a losing month for equity positions broadly. (Many traders, on the other hand, did quite well with the price action in May.)

Looking at currencies, we see the continued relative strength of the USD against the relative weakness of other currencies with mostly brown and red Market SQN scores. 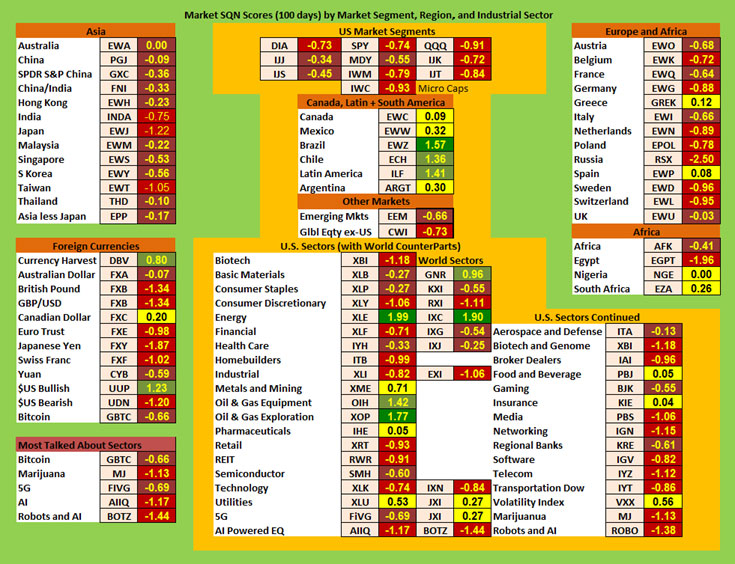 Focusing on the market sectors in the lower part of the table for a moment, you’ll note green scores for symbols in materials and energy related issues. Not surprising that we see strong scores in the commodities section below. 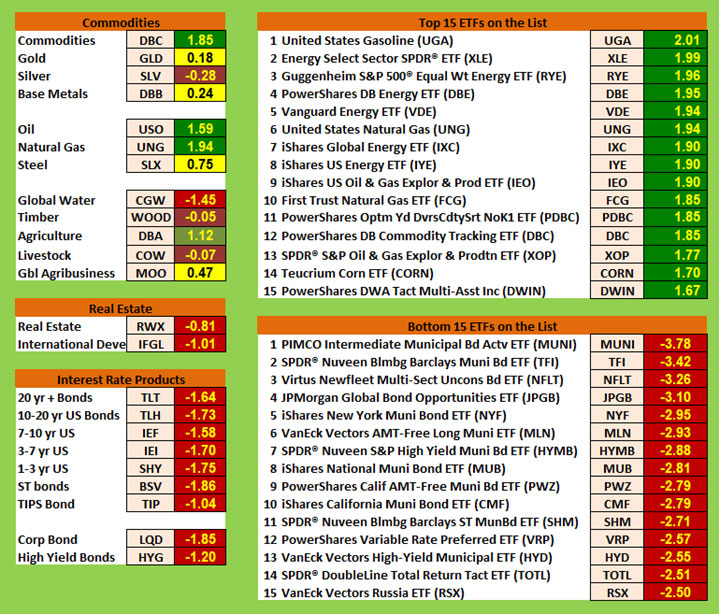 Eight of the 12 go up when stocks go down? Not always, so it’s been a tough commodity ETFs are positive, indicating stuff-based ETFs continue their climb (inflation). Meanwhile, all the real estate and bond ETFs (paper-based) are down. But wait. Don’t bonds traditionally month for the “traditionally” diversified 60% equities/40% bonds crowd. The markets aren’t so interested in keeping traditions. Or, at least that one, for now.

As we saw last month, the top 15 scores in the database go to energy and commodity related ETFs. On the bottom of the database scores, we find a solid red list of muni funds and bond funds.

With only a one percentage point difference from last month, the world market database is still heavily bearish with 10% having a bullish score and 79% having bearish scores.

What are the primary factors affecting the big picture right now?

Equities continued down in the US in May and all the different time periods we monitor for a market direction are in a Bear market type.

The S&P 500 fell to new 52-week lows before recovering some ground in the final weeks of May.

The market spent most of May in Strong Bear territory (dark green zone below). If the index just goes sideways for a bit, the Market SQN score will move back into Bear (the light green zone).

Volatility increased dramatically during May which correlates more with a market decline. If volatility continues the decline it started in mid-May and gets back to the Normal range, the related price direction will likely become sideways or head up. Not a prediction. Just observable correlations and likelihoods. For my technical friends; What do you notice about the volatility line in the chart? Higher highs and higher lows over the last 8-9 months. Does that cycle continue or end with the May peak?

After seeing new lows during the month, all four major US equity indices were pretty close to where they finished in April. You can see the dramatic gains in the row for the week that ended on May 27—quite usual behavior for a Volatile market type. Large caps are down 9-14% for the year while the NASDAQ and Russell are down 17-22%. Hopefully, your application of Tharp Think principles has your returns in much better shape than the broad market. 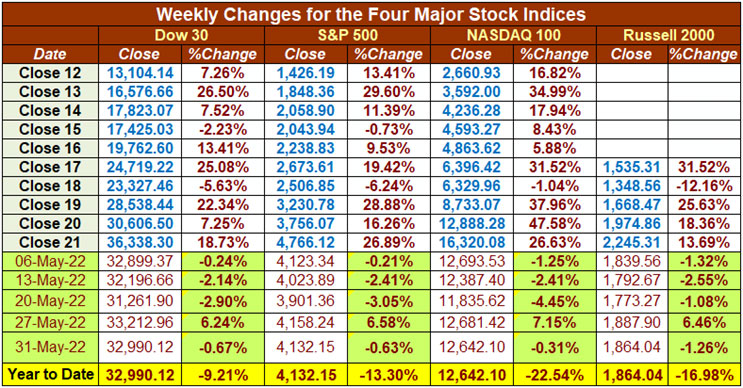 There’s little change from the model scoring table from the last two months.

The model shows another month of strong inflation. If you fill up your gas tank, shop for groceries, or buy just about anything, you don’t need a model to match what you see in person. Do you notice a change in your thinking or your behavior from beliefs related to continued rising prices? A belief in inflation increases current consumption rates which then fuels inflation. The WSJ wrote about this documented phenomenon in recent weeks. Van would likely smile and say something about creating our world through our projected beliefs.

USD stopped its yearlong rise after breaking through 104 and reaching a high of 105 in early May. It fell about 3% in the last weeks of the month. On a relative basis, the USD has more value than other currencies in the index basket—“the least dirty shirt in the laundry pile” as I heard someone say recently. USD is losing value, however, on an absolute basis—it buys less than it did last year. So, on a relative basis, other currencies buy less now than the USD buys now, even while they all buy less. For the Americans; Feeling better?

Most people are probably wondering; Is the worst of the stock market decline past us or are we just getting going? People talk endlessly about the macro picture, economic fundamentals, geopolitical factors, technical indicators or a Fed put level. All to try and get an idea of what the market is going to do and where it goes next. Some think they know. Others know they don’t. Either way, you invest/trade based on your beliefs or you move your money to the sidelines (which BTW, is investing/trading based on your beliefs).

Considering different scenarios and how you/your systems would react to them has a lot of value. So, do that. In addition, remember where we are at the moment, what we can say with certainty—the stock market is currently in a Strong Bear Volatile market type.

Applying Tharp Think, then you would:

A 100% cash position for Bear markets is a perfectly acceptable strategy as we teach in the Bear Market Strategies eLearning Course. Imagine an equity curve that matches some index but goes mostly flat for Bear markets rather than diving and recovering at some point. You could do a lot worse than that.

On the issue of the declining value of currencies – or fiat currencies as Van liked to call them – what are you doing (now or in the near term) to protect the value of your equity? Check your beliefs about inflation first. Is it sustained or truly transitory? Is holding cash a losing game? Are stocks, bonds, cryptos the place to be? If not at the moment, under what conditions would they be? If you don’t know where to look, where do you see green in the World Market Model? Think ahead, what assets/asset classes tend to do well in inflationary environments? What assets/asset classes tend to lose a lot and can you short them somehow?

These are some of the questions the folks in the How to Develop Winning Trading Systems That Fit You Workshop will be considering this week as they think about which markets are going to be attractive to trade based on the big picture. You don’t have to be in a workshop, however, to think about your answers to the same questions and be prepared for what might happen next.

Check back in early July for the next market update and we’ll see how the second quarter closes.