The Big Picture for me centers on what the impact of huge government spending will be. You need to ask yourself the following: 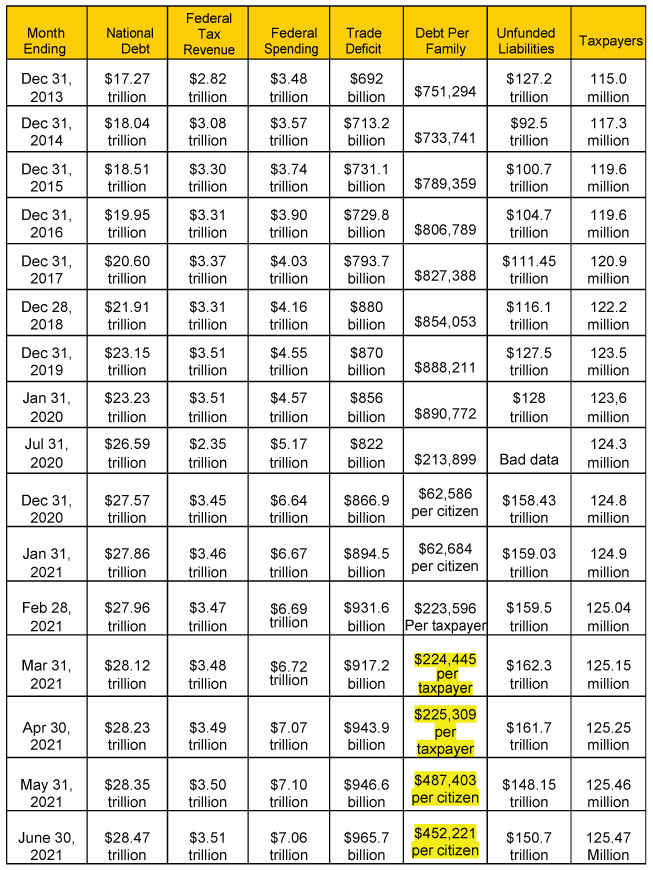 What are the most noticeable changes in the numbers since last month? The unfunded debt is down considerably from two months ago and then up a little since last month – is that government manipulation? Notice that the number of US taxpayers in the table continues to rise despite the media emphasis on COVID-19 deaths.

I started tracking debt-related data in two more tables which indicate how severe things are getting. This first table tracks bankruptcies, foreclosures, and employment figures. Bankruptcies are getting worse, but employment is improving.

The second table tracks money supply figures, credit card debt, and the number of millionaires. We have 255,008 more millionaires in the US than we did at the beginning of the year, and they make up about 5.6% of the US population. I know some of our clients have moved into that status because of cryptocurrencies but how does the US Debt Clock website know that?

Notice that we’ve had 11 straight months in which the number of US millionaires has gone up.

So now our measured periods range from Strong Bull for the longest period while the shorter time frames are all Bull.

Let’s take a look at the weekly bar chart below for the S&P 500. The market made about a $7 trillion recovery since the bottom and has been setting new highs again recently. It closed out June on a record high.

This is my visual definition of a bull quiet market for the last year. Slow steady upwards movement which is what the Market SQN score also reports with nearly all of the last twelve months in the bullish ranges in the chart below – 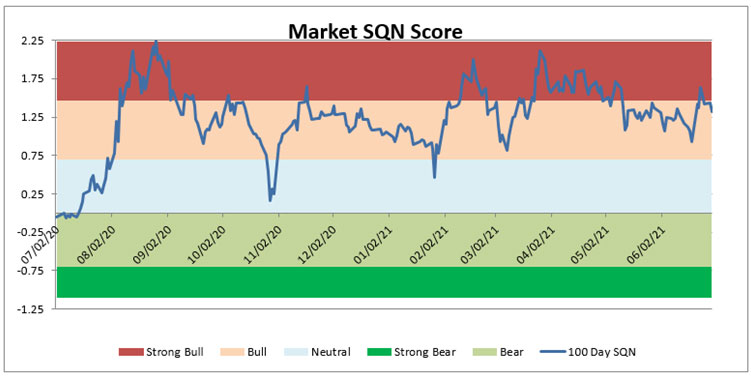 The next chart shows the volatility measurement for the last twelve months. We have been mostly in the normal range since last summer and volatility has decreased now into the quiet zone. The historic levels of volatility from early 2020 have now left the chart.

The next table shows the weekly changes for the four major stock indices for the last month and recent annual closing prices. Last year, the Dow was up 7.25%, the S&P was up 16% while the NASDAQ was up over 47%. Small caps were up 18% which was behind the NASDAQ but ahead of the other indexes.

Now, most of the major indices are up strongly for the year. The Russell 2000 is up 17% because money is now going into the smaller caps. The NASDAQ and Dow are up about 13% and the S&P is up about 14%. Hopefully, your liquid assets are up around 14% this year. If not, you are probably losing money to inflation. 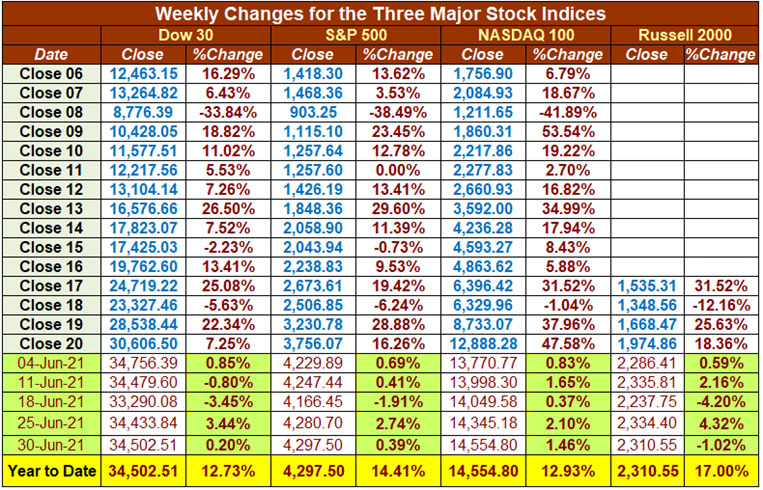 Since June 2020, the model has shown strong inflation in most months and if you add BTC as another component, then all months have been inflationary.

The original model assumed gold is a major hedge for inflation (and a hedge for catastrophic times) but Bitcoin may be replacing gold for that role. Think about it — would you rather have bitcoin or gold in your portfolio right now? Hedge Fund Manager, Ray Dalio, said he would rather have BTC than a government bond, but when everyone holds that opinion, then BTC is in trouble.

We added BTC as the fifth element in our model and we have listed prices going back through Dec 31, 2019. We will tally the new score with BTC and the old score without it. 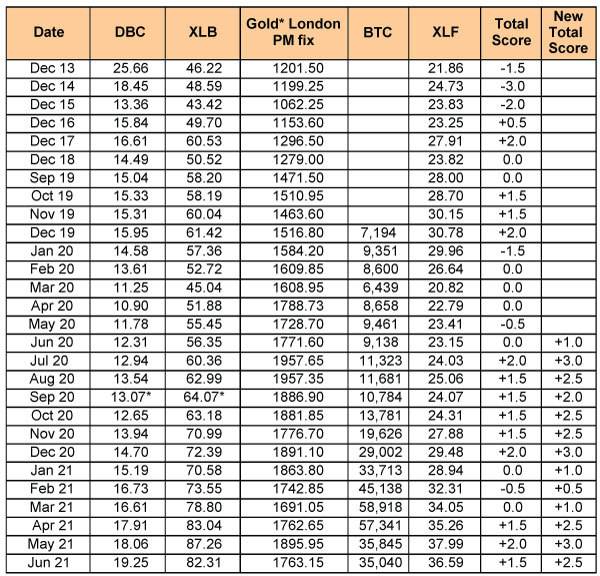 Commodities have always boomed during inflation and look at what they have done in the first half of the year.

Shadowstats.com adjusts the GDP by the original inflation calculation which suggests that we have been in a recession since 2000 with just one-quarter of non-recession. GDP got much worse in 2020, but it is starting to recover nicely and it’s at about 4% officially. Shadowstats.com shows real inflation at about 13% right now based upon how inflation was calculated in 1980 — but that’s about normal. Their charts for the money supply growth show the biggest changes in history.

On June 30th, the USD index closed at 92.43. That’s an 11-point drop in 15 months but in the last 12 months, it has only dropped 3 points. Our World Market Model (see the SQN Report article below) has the US dollar ETF (UUP) in yellow and it is no longer one of the worst performers in the whole database of ETFs. Now, the worst-performing ETF among all those we watch is FXY which is a Japanese Yen fund at a Market SQN score of -1.63.

For most of you reading this, the US Dollar is your base currency. Donald Trump oversaw an increase in our debt of about $8 trillion during his administration, $6 trillion of that was in his last year. Will Biden be any better? Not at the current rate. Biden’s infrastructure bill, which I think is essential at some level, will make sure of that.

1) BTC will take over from Gold as the primary protector from fiat currency devaluation. This is really not so hard to judge because it is already happening. Huge movements are happening in cryptos which we’ll summarize in the newsletter on June 16th. I think institutional FOMO will take hold over BTC in 2021. We’ve had a $30,000 drop from the peak, but big institutional whales are not selling now – they are buying. I think our Super Trader crypto system will give another buy signal in BTC in the next few months.

2) Altcoins have had a big crash but could still move again in 2021.

3) COVID-19 will be around for a few more years but my sense is that the impact will go down fairly quickly in 2021. I got vaccinated in early March and after a month took two driving trips and two airplane flights. COVID-19 won’t be over this year due to variants, at least a third of the US population hasn’t gotten the vaccine, and because the whole world won’t get vaccinated as fast as the US.

5) In the fifth and final scenario, COVID-19 vaccines prove effective, and we reach herd immunity levels later this year. World unrest and economic malaise will improve.

With all of this uncertainly and most people worldwide still being unvaccinated and needing to stay at home, this is the best time possible to get a financial education and work on yourself. We are here ready to help with books, eLearning courses, and online workshops.