The big picture is COVID-19, decreased economies, and massive government bailouts that dwarf anything in the past. And the market type has been crazy. From late February to late March, we went from Strong Bull to Strong Bear. It’s never moved before that many market types in so short a period. In the last few months, the market has recovered most of its total loss – but don’t think that we are out of the woods. What happens if we see the unemployment rate fail to decline from here – or even increase? COVID-19’s impact could last for several years having the same economic and social effects as a World War. Although the pandemic has crushed economic output, it has been helping with other things like reversing global warming. 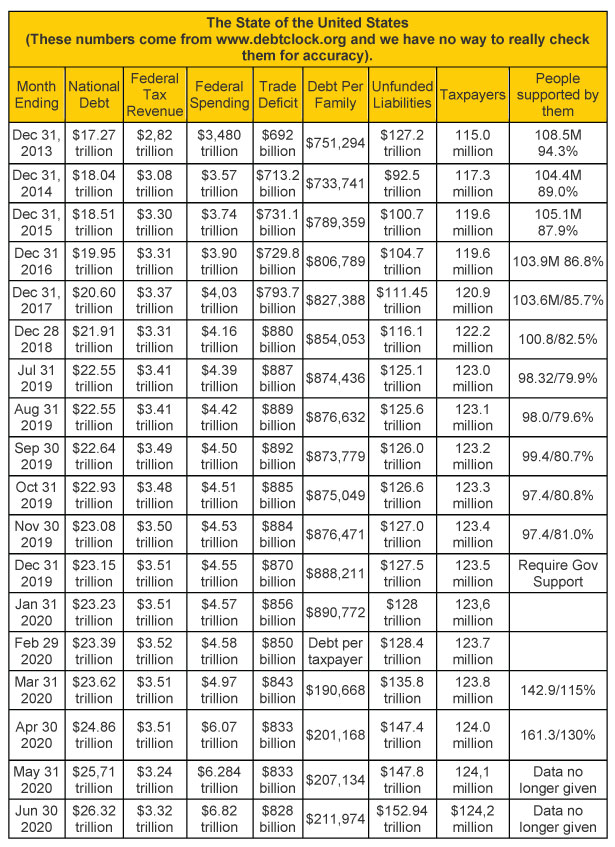 The unofficial debt of the US Government has jumped suddenly from $128.4 trillion to
$152.94 trillion. That’s an increase of nearly $25 trillion in three months – which probably means the site is counting the current bailout package.

Also notice that federal spending is about $3 trillion more than federal income—and that will get much worse. I’m not sure what deficit level is unsustainable, but we have to be close—and I said the same last month. But who knows what the government might do— perhaps it will issue a new currency or take some other drastic measure?

I monitor the Market SQN for timeframes from 5 weekly bars to 40 weekly bars. Right now, here are the directional components of market type for the various periods –

So now our measured periods range is from Bear to Bull.

Let’s take a look at the weekly bar chart below for the S&P 500. You can clearly see the uptrend for the second half of 2019 and that we made the last new all-time high in mid-February. You can also see the tremendous drop starting in late February and then the formation of a very volatile base after reaching the bottom in late March.

At this point, I expect that COVID-19 will be with us for a couple of years and the huge impact we’ve seen so far will just be a drop in the bucket. If that’s the case, (and I trade based upon what the market does, not what I think will happen), then the market should go well below the March lows. But right now I’m waiting to see what happens to the base that has formed. Does the market crash from here or does it go higher and take out the February highs in the S&P 500?

The next chart shows the extreme changes in the market type direction which occurred quite suddenly – the fastest I have ever seen.

The chart below shows the volatility measurement for the last twelve months. The volatility had been in the Quiet zone for several months when in late February 2020, it climbed through Normal and Volatile on its way to Very Volatile. We are now back down in the Volatile range.

The next table shows the weekly changes for the four major stock indices for the last month and annual closing prices. The Dow is down 9.55% so far in 2020, the S&P is down 4.04%, and NASDAQ up nearly 16.3%. The Russell 2000 is down about 14%. All of those indexes were down a lot more in March but have recovered much of their declines— or in the case of the NASDAQ, reached new highs. 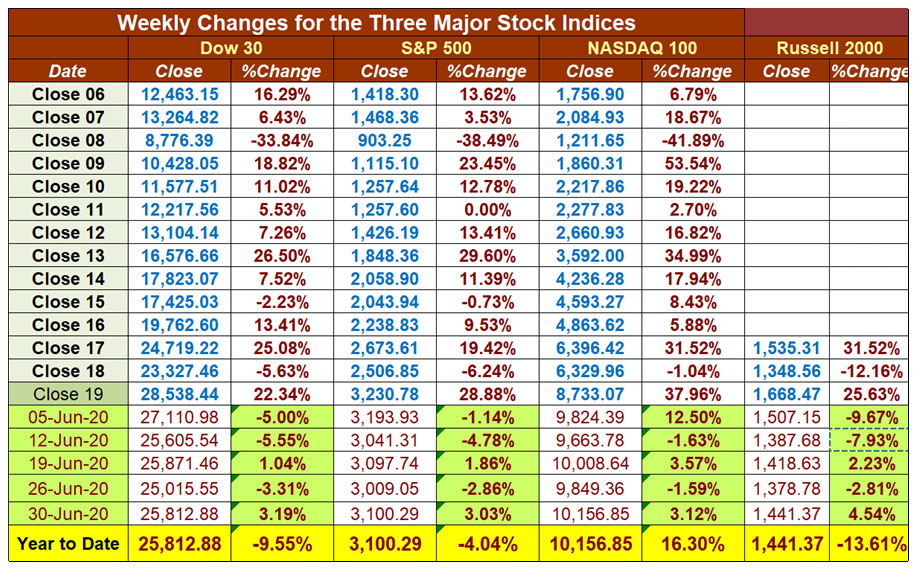 We had another month where the four components of the model split; two displayed inflation while the other two showed deflation. 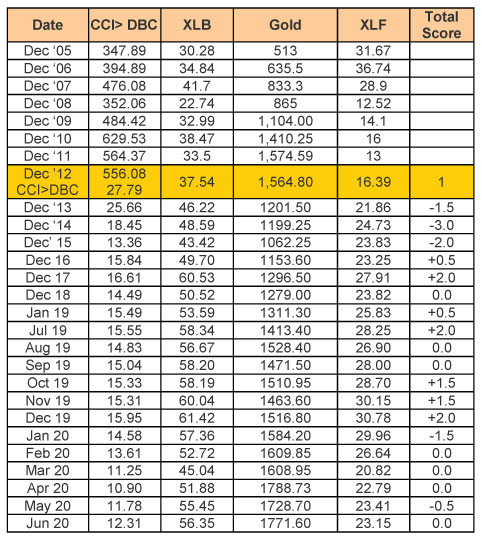 So what should we expect from a pandemic that could last two years —massive inflation, a deflationary depression, or what? Well, the months from February through June are basically neutral – so the market doesn’t know.

Shadowstats.com still shows the inflation rate (as it was originally conceived in 1980) as being around 7% with the official rate being zero. 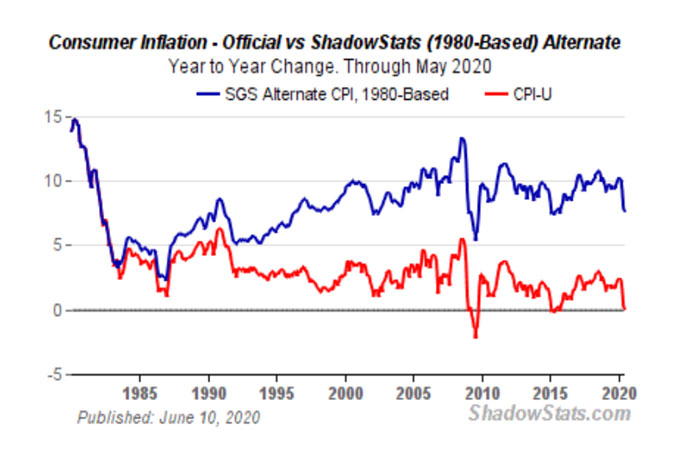 Adjusting the GDP by the original inflation calculation suggests that we have been in a recession since 2000 with just one quarter of non-recession. The ShadowStats site shows the current GDP as being strongly negative while the official figures are at about zero. 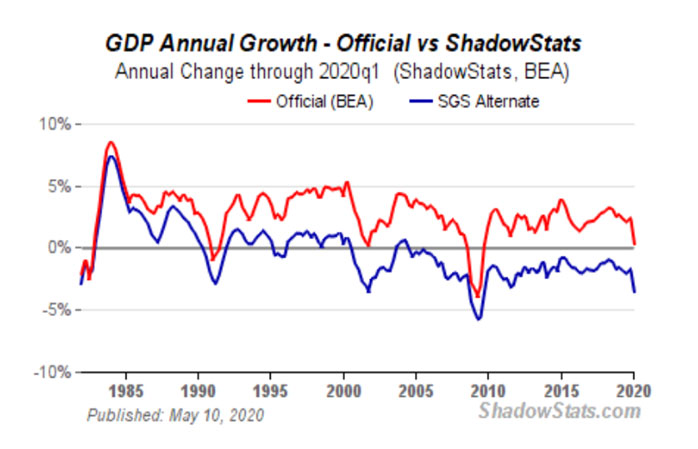 And lastly, the site’s unemployment stats do a good job of showing what is really going on in the economy. Like most economic statistics, their data lags about a month.

USD closed June at 97.34 and it closed May at 97.54, so it has been pretty flat in June. Compared with the rest of the world and in spite of our massive money printing, USD is not losing much value relative to other currencies. The Dollar closed down from its high of nearly 103 around March 18th. You can see the yo-yo ride USD has been on during 2020. To keep the current level in long term perspective, however, remember that this index started more than 40 years ago in 1973 at 100. The chart is courtesy of www.stockcharts.com.

Worldwide, markets have crashed over the Coronavirus pandemic and right now, many parts of the world remain in lockdown. The US has been opening up but I see signs that we would probably be better off not opening yet except that people (especially those will low levels of consciousness) are very unhappy. I said that last month. This month, it looks like I was correct. We are not close to being able to open up completely or safely as many states set new records for COVID-19 cases. We have also seen looting and violence over the George Floyd death, however, I believe only a few people have been trying to turn the peaceful demonstrations violent. They present a strong health danger— not from the violent riots but from the lack of social distancing. The rioters are certainly not paying any attention to the possibility of catching COVID-19.

What’s interesting is how many different interpretations are around about how this will all play out. We have good news in that testing suggests that about 10% of the US population has antibodies for the Coronavirus. Thus, a lot of people (especially young people) catch the virus but have no symptoms at all. We need about 70% immunity before this pandemic will end. Also, I’ve heard that people with Type O blood will have the least amount of problems (my wife is an example), and people with type A blood (me) will have the most problems. People with Type O blood make up more than a third of the population.

It’s clear now that two actions, in particular, have kept COVID-19 most under control in a few places –

As you can see, there was a steady drop in new cases into the start of June but I said the rate was not low enough for people to be safe yet. Look at what’s happened to the new case numbers since states have started to open up.

Until next month, this is Van Tharp