Equity indexes have been rising since the December 24 lows last year. The most recent highest high in the S&P 500 was on June 20th which took out the September 2018 highs. On June 28th, the S&P closed at 2941.76. In just over six months, that’s an increase of 25% from the market bottom in late December. 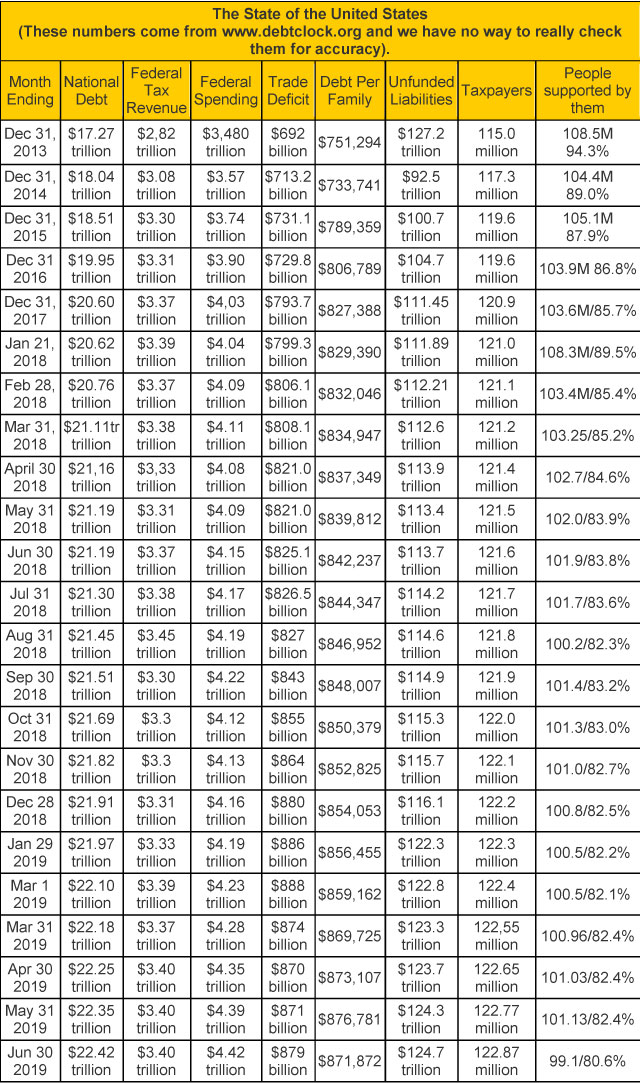 The national debt recently surpassed twenty-two trillion dollars. It went up $170 billion in the last two months. And in the six month since the start of the year, it increased by $260 billion. Your family’s share of the debt went up by $29,545 — about half of the median household income in the US at $61,372.

According to the usdebtclock site, there are 169.7 million people receiving government benefits. For my category above, I include only retirees (54.0 million), disabled (10.1 million), and food stamp recipients (35.0 million). That’s 99.1 million people supported by 122.9 million taxpayers.

A lot of newsletters are now warning of the collapse of the dollar to scare you into buying their product, however, I was worried about the debt when it went over one trillion. $22 trillion later, what is the difference? As you can see, since we’ve been reporting these figures since 2013, the debt has increased by $5 trillion.

The newest scare tactic by newsletters is saying that cash will be outlawed soon and you will have to pay for things electronically. The reason for that is so the banks can charge negative interest rates. In other words, the banks will charge you interest for having your money deposited with them. If that were to happen, most people would want to withdraw their money from the banks and hence the need for the government to outlaw cash. Further, if cash were to be outlawed, cryptoassets will absolutely take off especially the anonymous cryptocurrencies such as DASH and Monero.

Let’s take a look at the weekly bar chart below for the S&P 500 which shows the late September top, the volatile down moves from October through December, the rapid climb from the Christmas Eve low, and May’s drop. You can see that May’s drop was recovered in June.

I define the market direction based on the Market SQN using 100 days. I also monitor timeframes from 5 weekly bars to 40 weekly bars. Given the bars on the chart, you can probably understand the direction for each of the periods —

The chart below, shows the strong trend from Strong Bear early in the year to Strong Bull and then the move back down to Bull recently.

The third chart shows the volatility measurement for the last year. Last month, volatility was Normal and this month it has moved into Quiet.

Lastly here are the weekly changes for the three major stock indices for 2019.

Three of the four model components were showing inflation in June — 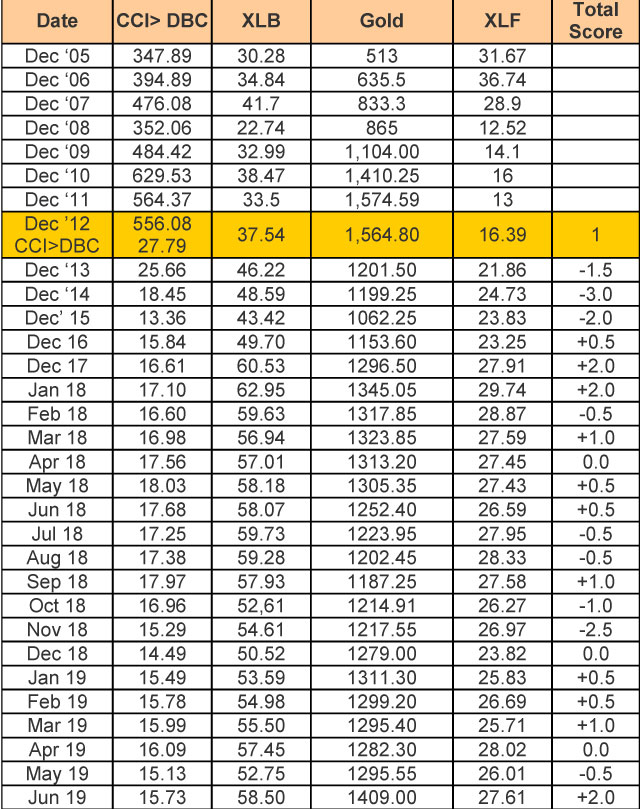 The inflation/deflation model has returned to inflation with June’s reading of +2.0. This is one of the bigger monthly jumps we have seen but we’ll see if it lasts.

Shadowstats.com still shows the inflation rate (as originally conceived in 1980) as being around 10%. Adjusting the GDP for the original inflation calculation suggests that we have been in a recession since 2000 with just one quarter of real growth.

USD is at 95.67 after closing at 97.75 last month. The Dollar declined for most of the month of June as gold hit its highest value in a number of years and BTC soared.

To put the value of the USD in a longer term perspective, remember that the index started in 1973 at 100. Thus (relative to other fiat currencies which tend to inflate as well), it’s pretty close to its starting point. This is partially because other currencies such as the Euro are doing so poorly. For example, the Euro is currently at 1.14 dollars.

Trade wars are not pretty and we are in the middle of a big one. One of my Super Trader candidates has gone back to China to visit his parents for several weeks. He said that Chinese media are pouring a lot of negative information about the US and Donald Trump onto the people so he doesn’t see the trade war ending soon. In the meantime, a lot of Chinese goods are bypassing the tariffs by going out through Vietnam.

Cryptos are more than making up for the trade war’s effect on equities, however, as shown by the following charts of BTC over the last six months (below left) and the last four and a half years (below right). 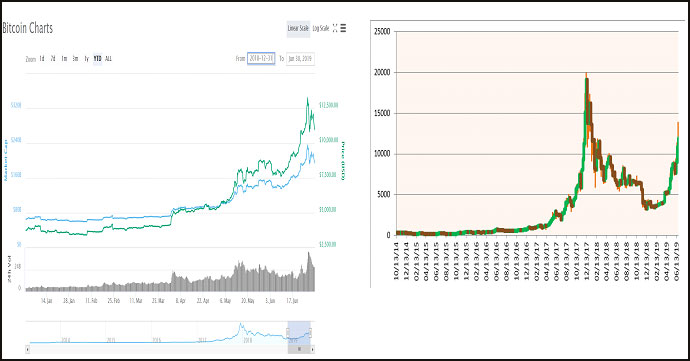 Our purpose is not to predict but to merely reflect on what is happening right now. Stay in the now!

Until next month’s update, this is Van Tharp. Trade well and be happy.