The big picture is COVID-19, an oil price war, and massive government bailouts that dwarf anything in the history of the US. The market has recovered most of the loss from the March bottom – but don’t think that we are out of the woods. The impact of COVID-19 could last for several years and could have the same economic and social effects as a World War. Although the economic output is down, the pandemic has been helping with things like reversing global warming. 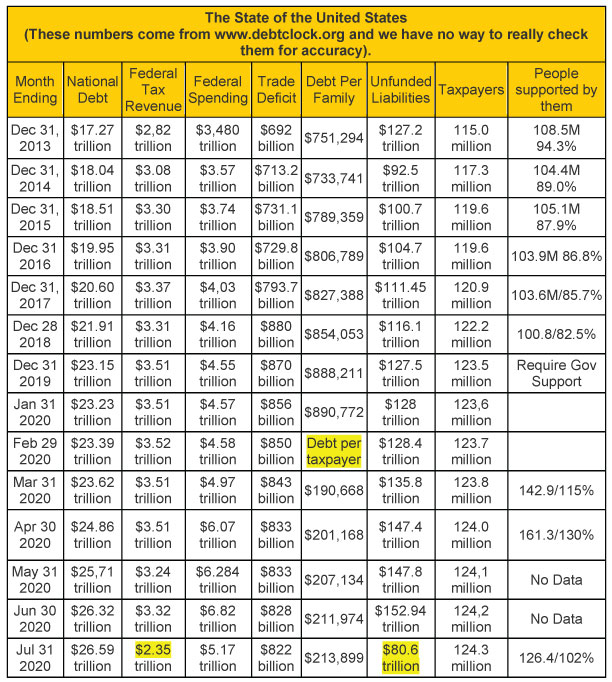 Notice that the federal debt increased from $21.9 trillion in December 2019 to $26.59 trillion at the end of last month. That’s an increase of $5 trillion in seven months. Also, notice that federal spending is about $3 trillion more than federal income and that will get much worse. However, I’ve highlighted several data changes that make no sense (except for government manipulation) since last month. They include a trillion drop in tax revenue (which makes sense but not over a one-month period) and the unofficial debt going from $153 trillion to $80 trillion.

I also want to start another table which indicates how severe things are getting.

And one more table.

I keep wondering how the stock market can go up while we are in the worst economic crisis since the Great Depression. My guess is that the Federal Reserve is propping up the stock market but at the same time, Congress adjourned without doing anything for all the people on unemployment. As a result, I want to keep track of bankruptcies and foreclosures. I also expect more riots, etc. with so many people unable to pay their bills. Lastly, I’m looking at US billionaires. For example, Jeff Bezos, CEO of Amazon, who is the richest man in the world, is currently worth $182.2 billion. On the final day of 2019, he was worth $115 billion. So his net worth has increased by 58.4% in 2020 while the COVID-19 pandemic is crushing the average American. I read someplace recently that the last time there was this big of a division between the super-wealthy and the average person was 1929 – at the time of the stock market boom. That was also the last time that politicians voted so strictly along party lines.

So now our measured periods range from Neutral to Strong Bull.

Let’s take a look at the weekly bar chart below for the S&P 500. The market has made about a $7 trillion recovery since the bottom and is now basing. Whether it will go up or down after that is anyone’s guess. I own few stocks that have done tremendously well like SHOP (which hit about 350 in March and is now about $960) NVID which went below 200 in March is now about $380. I also own ZM which didn’t go down in Feb. or March but has since moved from about $100 to about $260.

At this point, however, I expect that COVID-19 will be with us for a couple of years and the huge impact we’ve seen will just be a drop in the bucket. If I’m right (and I trade based upon what the market is doing and not what I think will happen), then the market should go well below the March lows. But right now I’m waiting to see what happens after the base pattern. Does the market crash from here or does it go higher and take out the old highs in the S&P 500?
The next chart below shows the extreme changes in the market type direction which occurred quite suddenly – the fastest I have ever seen.

The next chart shows the volatility measurement for the last twelve months. In January, volatility had been in the Quiet zone for several months and then suddenly it went to Volatile on its way to Very Volatile. We are now back down in the Normal range.

The next table shows the weekly changes for the four major stock indices for the last month and recent annual closing prices. The Dow is down 7.39% so far in 2020, the S&P is finally up, and NASDAQ up nearly 25% on the year. Small cap stocks have been crushed with the Russell 2000 is down about 11.3%. 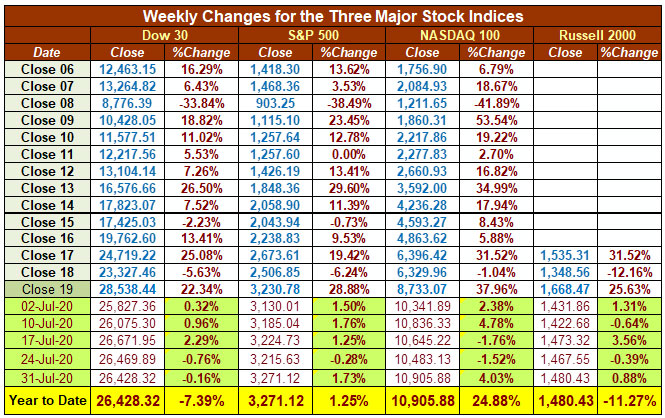 Three components of the model displayed strong inflation in July: 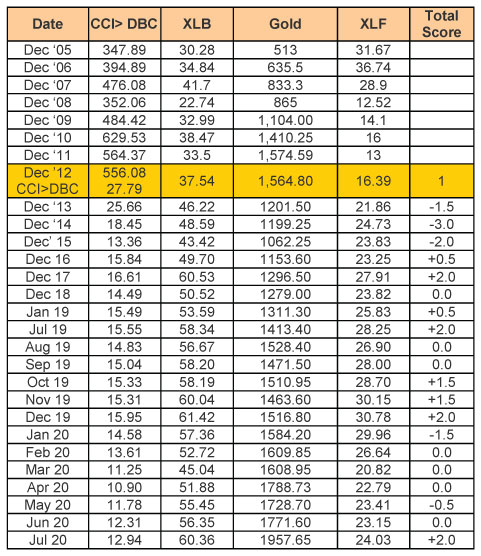 Suddenly, inflation is showing up in our model. What would you expect from a COVID-19 pandemic that lasts two years – massive inflation, a depression, or what?

Shadowstats.com adjusts the GDP by the original inflation calculation suggests that we have been in a recession since 2000 with just one-quarter of non-recession. Shadow stats shows the current GDP as being strongly negative while the official figures are at about zero.

The US GDP from April to June plunged 32.9% on an annualized basis – and that’s the worst ever. But stocks are in a bull market?

USD closed at about 103 in March. On July 30th it closed at 92.79. That’s a 10 point drop in a few months. For example, an Aboriginal Art Gallery in Sydney that I’ve purchased from in the past sent me an email in March. They were hurting and had a big sale. I really wanted certain pieces by a particular artist and they were 30% off at the time. But actually, that was 30% off plus 10% off for no VAT plus almost free shipping at a point when the AUD was at about 0.55 USD. They just sent another email and are featuring the same artist at 20% off now. They still have all the paintings as earlier, however, now they are 20% off and with the AUD at 0.71 USD, that’s a huge change in price for me.

Coming up on August 12th, Chuck Whitman and I are doing a really special workshop called “How Big Money Trades”. I think it’s one of the most important workshops we’ve ever done and I’m excited to be a part of it. One of the topics we’ll talk about is watching what happens to your base currency. That’s a huge problem for those who have all of their money in the US Dollar instead of holding some gold or cryptocurrencies (like I do). The chart is courtesy of www.marketwatch.com.

We’ve had a worldwide crash over COVID-19 and right now, much of the world remains in a lockdown. The US is starting to open up again but many states are setting new records for COVID-19 cases. We are also seeing looting and violence over the Floyd death. What’s happening are peaceful demonstrators plus a few people who are trying to make everything violent. That violence was planned and they have the perfect timing for it. Chuck Whitman was telling me that looters smashed almost every shop window and looted the stores on Michigan Avenue in Chicago (the main shopping avenue downtown with lots of high end stores). My son works for law enforcement in California and said they have been looting the banks in San Diego. And I’m sure the demonstrations don’t help to contain the virus at all.

There are now over 100 countries who don’t want US Citizens to visit. We’ve gone from having the best passport in the world to one of the worst in about 6 months.

Politicians spent massively at the start of the COVID-19 pandemic but I’m seeing no new government loans to businesses and they have not extended the extra unemployment benefits. COVID-19 could be a major problem until the end of 2021 – and if it is, many, many things will change – especially for Americans.

We have two “elderly” presidential candidates. Reagan was the oldest president in office to date and he ended up becoming senile by the end of his 2nd term. Trump was not that much younger than Reagan when he was elected and Biden is 77 years old.

One rumor has Trump ditching Pence at the last minute and going with a woman VP. Biden is considering only women for his VP. That probably means there is a good chance that our next president will be a woman – especially if Biden or Trump die in office. But what a mess she will be inheriting.

Look and see what’s happened to COVID-19 cases since the US started to open up again in June – 4.5 million total cases and 151,000 deaths.

Staying at home is essential and limit your contacts to only a few people. With these kinds of circumstances, now is the best time possible to work on yourself and get a financial education. We are ready to help with live-streamed workshops nearly every week and a number of rich home study programs.

Until next month, I’m not going anywhere. This is Van Tharp.