Cryptoassets started the year with three flat months followed by a strong uptrend for the last three months. Most major cryptoassets are up over 100% since mid-December. The obvious bull trend since the first of the year is easy to see just looking at Bloomberg’s Galaxy Crypto Index chart below. 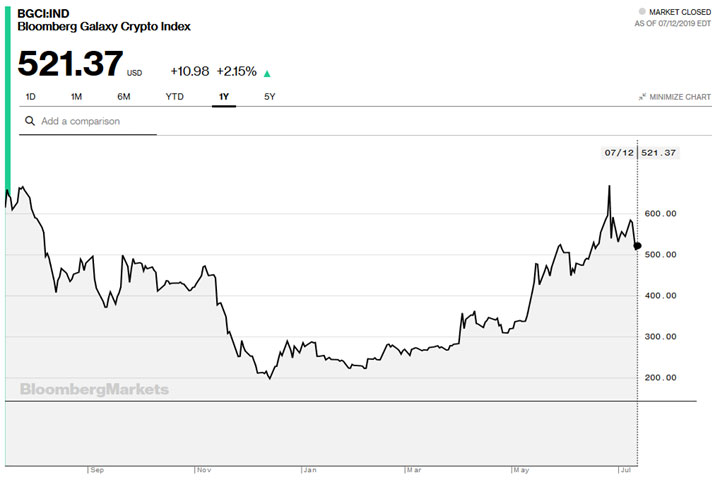 Bloomberg’s Index tracks ten major cryptoassets and Bloomberg started the index in May, 2018 at 1000. Thus, the index has been active for about a year and is now just under 50% of its starting level.

Just because BTC is a 1st generation crypto does not mean it is likely to die off and be survived by the later generation cryptos. It’s hard (impossible?) to predict which cryptoassets will thrive or even survive as we move forward as there are so many variables in play. Technology, use case, adoption, support, and multiple other factors come into play. For now, we monitor these five cryptos because they represent several relevant aspects: public ledger — BTC, smart contracts — ETH+NEO, scalable contracts at minimal cost – IOTA+SKY. 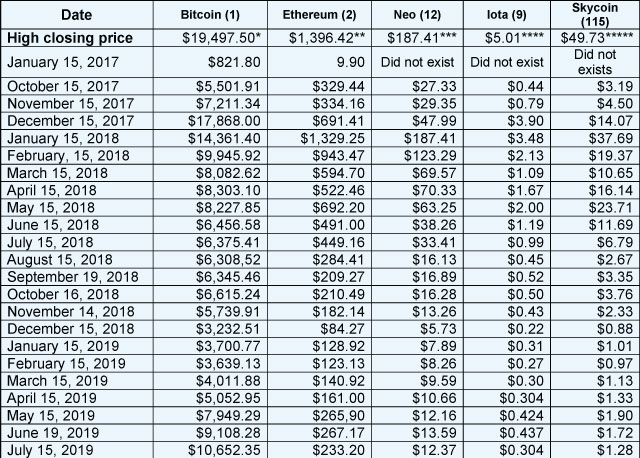 All five of these cryptos are up significantly from mid-December. Most have at least doubled, but IOTA and SKY are down since April.

The following two graphs show BTC on a weekly basis and since 2014.

The more recent chart shows that BTC is in a trading range of about $4,000.

One of the crypto newsletters that I get says that BTC just had it’s biggest initial bull run in its history but that it’s now in a corrective phase that could take it down to as low as $7,000 – a 50% correction. If that’s right and BTC reaches that price, we still won’t get a bearish Market SQN score.

The market cap table below shows a similar pattern to the individual cryptos in the table above. The total market cap for cryptos is the highest it has been since June, 2018. 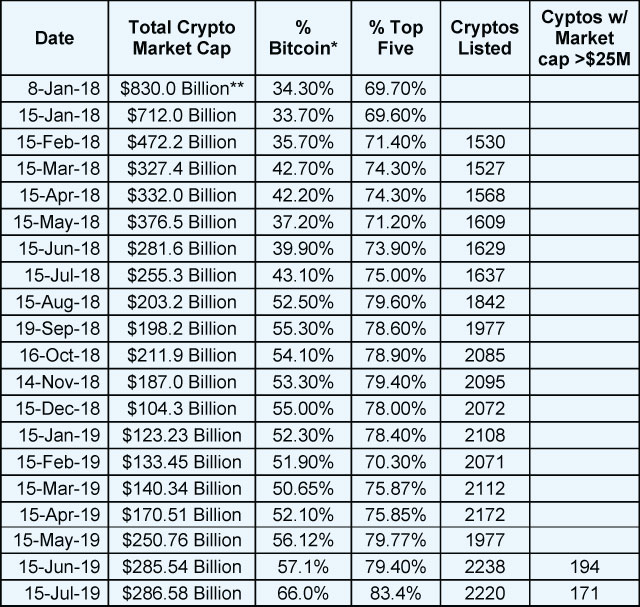 You definitely should ignore any coins below $25 million in market cap.

We are down to one spreadsheet that we plan to use to monitor cryptos and in it, we use price data from Tiingo (a paid data service). I will just be reporting from the results of that spreadsheet. 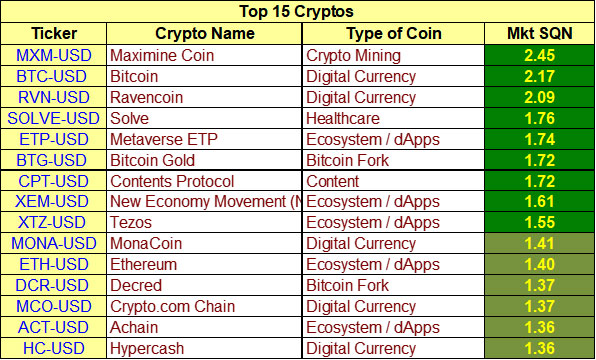 Only the top 9 coins are strong bull . Of the top ten coins, I have never heard of MXM, Solve, ETP, CPT, and XEM.

The next table shows the Bottom 15.

1 This report was run on July 14 using closing data from Friday, July 12 so BTC has a different value that we report today.
cuchart7 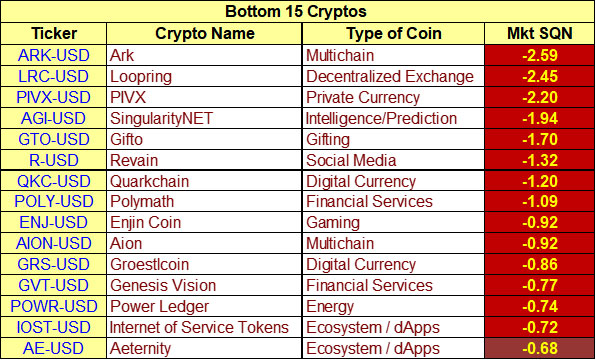 In the bottom list last month, we had four cryptoassets in strong bear territory and now 14 of the 15 have that rating.

I’m not sure what to make of the next two tables except that certainly look weaker than last month.

And here is the second table which looks even weaker. 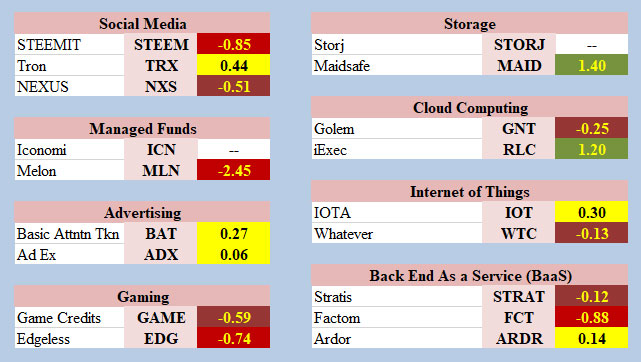 We are still working to perfect these tables so we apologize for the symbols that did not have a Market SQN score.

This is the year that I expect significant institutional involvement in cryptoassets. Here is what’s going on right now and in the coming months —

Do you really want to be on the sidelines when something this big is about to start?

Facebook just introduced their new crypto token which it is calling Libra and Fed Chairman Powell said he had serious concerns about privacy, money laundering, consumer protection, and financial stability. But why shouldn’t he have serious concerns? Facebook will be printing it’s own form of money — something that only the Fed and other central banks have had the power to do until now.

Libra has generated some interesting comments from notable people. Mark Cuban said, “There’s going to be some despot in some African country that really gets upset that they can’t control their currency anymore, and that’s where the real problems start occurring.”

Donald Trump said, “I’m not a fan of Bitcoin and other Cryptocurrencies, which are not money, and whose value is highly volatile and based upon thin air. Unregulated crypto assets can facilitate unlawful behavior, including drug trade and other illegal activity.’… if Facebook and other companies want to become a bank, they must seek a new Banking Charter and become subject to all Banking Regulations.

On the other hand, Libra has the financial and infrastructure support from Visa, PayPal, eBay, Lyft, Uber, and Spotify.

To me, all of this shows the potential of cryptos to change everything – including existing power structures. The powers that be, however, are not willing to give up their power easily.

In May of 2020, the BTC protocol will only allow half as many new coins produced in each cycle. This means the supply of new coins will drop just at the time when institutions will be wanting them more. BTC usually rises about 200% in the year prior to a halving, however, I would expect the rise to be much greater in a roaring bull market which is possible for 2019-2020.

The SEC stance that cryptocurrencies are a security has basically isolated the US and US citizens from most of the crypto world. Binance is now closed to new US investors but they will open a US branch and conjunction with BAM trading. Binance is the largest crypto exchange in the world and it originally started out in China. When the regulatory atmosphere there became too difficult, it moved to Japan. Japan started to crack down and it then announced in March that it was moving to Malta. I don’t know the official opening date but they are definitely in Malta now. Malta is a crypto friendly island and it doesn’t tax the profits from crypto trading. The Malta exchange will close to current US citizens in December. We are not yet sure of what will happen with crypto assets that US investors own already but will not be allowed to own at that point.

As you can tell, the crypto regulatory environment is a mess. For example, all around the world, when a new ICO starts, it is typically offered on exchanges that are not open to US Citizens. Why? Crypto start-up companies don’t want to battle with the US SEC so they just keep American investors out. Within the US, start-up companies that want to issue coins/tokens are now doing so under REG A+ — which allows non-accredited investors to participate in startup companies. The first two ICOs were recently approved by the SEC were Blockstack and to YouNow. One advantage of these tokens is that they will probably be stronger than most of the coins in coinmarketmap.

Grayscale has openings in its various cryptocurrency trusts, including GBTC, for accredited investors. The advantage of participating is that the shares always sell at a huge premium. GBTC now has about a 30% premium which has been as high as 100%. Their new trust for Ethereum, ETHE, has been open less than two weeks. The value of the Ethereum holdings in one share of ETHE right now is about $21, however, its price was as high as $600 in the first few days. Currently, it’s still trading about more than 100% premium at $55. It probably should sell at perhaps a 25% premium which would make it about $25-$27. This just shows how stupid some people can behave when they purchase something at a 1,000% premium.

The disadvantage of investing in the new Grayscale issue is that you cannot sell your position for a year. That’s a huge risk because who knows what will happen in a year? 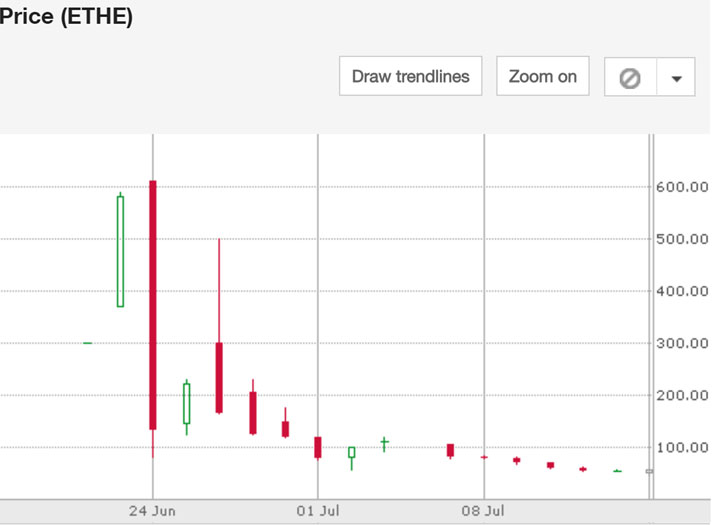 If you had started with $2,000 in BTC on July 9, 2015 and had followed this system’s rules, you would have a profit of $34,973 today. You would have made five trades which resulted in one loss and four gains. You would also be long BTC again right now.

We can’t go back into the past but we can start monitoring the performance of the system now. The most recent long entry signal from this system was on March 23, 2019 but we will assume we started with a $5,000 investment on June 13, the day after I presented the Trading Genius workshop.

You would only be able to trade BTC in this kind of system, however, if you agreed with my beliefs, some of which are as follows:

Our buy and hold system, given in the March 15th 2019 newsletter turned $3,700 into $87,292 by May 2019. That’s a gain of 23.6 time in value.
The Trading Genius system cited above taking positions in multiple coins did better than that with nearly a 35 fold gain. If someone could have somehow sold all of the coins at their all-time high prices (an impossibility!!!) that would have produced a gain of 257 fold.
The best system presented at the Super Trader Crypto Workshop actually outperformed that with a 295 fold gain in about 4 years.

Remember – you can only trade your beliefs so let’s look at the assumptions of that last system.

If these beliefs no longer work in the future, then the system will be unable to approach its previous performance.

I will follow the monthly values of our portfolios to see if our assumptions continue to work and the system is able to capture huge returns over the next four years. If BTC begins a bear market, however, we will close out the portfolio. As I said earlier, it would have to drop into the low $5,000 range

Remember that the purpose of this report is not meant to give investment recommendations or to be predictive in any way. It is meant only to give you a status quo of the cryptoassets markets.

Until August 15th, my birthday, this is Van Tharp.