What is going on? The stock market and cryptos are both booming – because the Fed stimulus goes into markets, not the economy. That is probably more likely to continue under Biden than Trump because the Democrats really want to help out those who are suffering from COVID-19. I expect all of the COVID restrictions to last throughout 2021.

Americans are still not taking the Coronavirus seriously, especially when the average person weighs the risks and rewards for them of the situation. Let’s see, I might be sick for two weeks and the chance I would die is remote versus I can’t work or do what I want to have fun. The real problem is that our hospitals are full of serious cases and there’s no room for more. 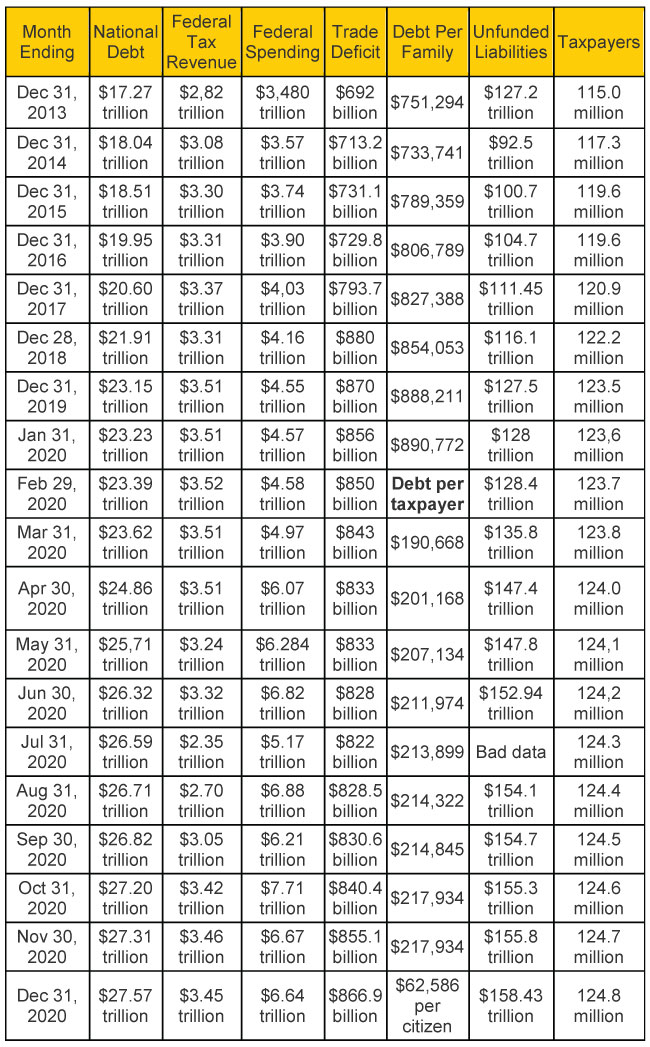 This month’s figures don’t yet show the impact of the new COVID-19 spending bill, but it should start to show up next month. Think about it – the new stimulus bill handed out $600 per person or $2,400 for a family of four for everyone making under $75,000. If you are working and receiving your regular salary, however, then you don’t need the stimulus – and that’s a majority of Americans. But if you are unemployed and you need several thousand per month to live on – then the stimulus check does very little. So, it’s really misplaced money.

Notice that the number of US taxpayers in the table continues to rise – despite the media emphasis on COVID-19 deaths. The unofficial debt went from $153 trillion mid-year and now is listed at $158.43 trillion, up by $3 trillion just last month.

The second table tracks money supply figures, credit card debt, and the number of millionaires. We have about 40,000 more millionaires in the US than we did last month, and they make up about 5.5% of the US population.

Notice that we’ve had 7 straight months in which the number of US millionaires has gone up.

So now our measured periods range from Neutral for the shorter periods to Strong Bull for the 200 day period.

Let’s take a look at the weekly bar chart below for the S&P 500. The market made about a $7 trillion recovery since the bottom and has been setting new highs again. The S&P made 5 all-time highs during the month of January 2021.

The chart below shows the extreme changes in the market type direction which occurred quite suddenly almost one year ago – the fastest I have ever seen. Then look at the huge rise in July, the return to Neutral in October and now we are Bull again.

The next chart shows the volatility measurement for the last twelve months. At the beginning of 2020, volatility had been in the quiet zone for months, and then suddenly it went to volatile on its way to very volatile in March. We have been mostly in the normal range since last summer.

The next table shows the weekly changes for the four major stock indices for the last month and recent annual closing prices. Last year, the Dow was up 7.25%, the S&P was up 16% while the NASDAQ was up over 47%. Small caps were up 18% – behind the NASDAQ but ahead of the other indexes. January had mixed results also – the Dow and S&P were down while the NASDAQ and Russell were up. 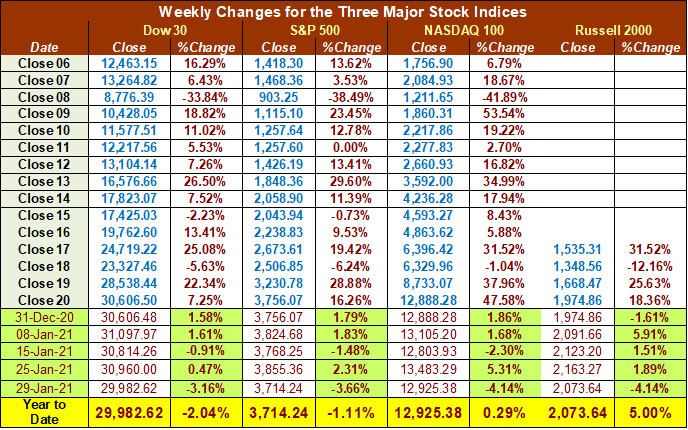 Three components of the model signaled inflation again in January after doing so in December but the model score went to zero.
Inflation has been at +1.5 or above for the past six months, but suddenly it’s back to zero? The model assumes Gold is a major inflation hedge (and a hedge for catastrophic times) but Bitcoin may be replacing gold for that role. Think about it – would you rather have Bitcoin or gold in your portfolio right now? 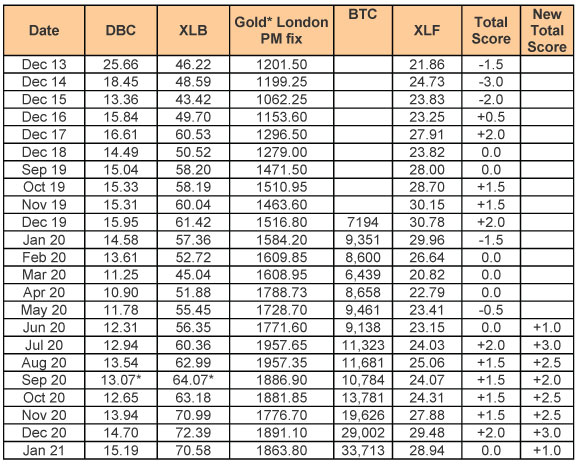 Shadowstats.com adjusts the GDP by the original inflation calculation suggests that we have been in a recession since 2000 with just one-quarter of non-recession. The site also suggests that the last GDP reading was about a 10% drop. The US GDP from April to June plunged 34.3% on an annualized basis – that is the worst drop ever. But stocks are in a strong bull market and we’ve had a slight recovery in the GDP.

Shadowstats.com shows real inflation at about 9.5% right now based upon how inflation was calculated in 1980.

USD closed at about 103 last March. On Jan 31st, 2021, it was 90.53. That’s a 12-point drop in ten months, however, it’s a slight gain over last month’s 89.94 value. Our World Market Model (see the SQN Report article below) has the US dollar ETF (UUP) in red. For the last few months, it’s been one of the worst-performing ETFs. UUP was one of the two worst performers in the whole model last month, however, it has a little better ranking this month at number 12 from the bottom. That’s one reason why the whole SQN® Report and table looks so bullish (green) – everything is measured relative to the value of the US Dollar.

For most of you reading this, the US Dollar is your base currency. Donald Trump oversaw an increase in our debt of about $8 trillion during his administration, $5 trillion in the last year. Hopefully, Biden could do a little better – but that’s unlikely. 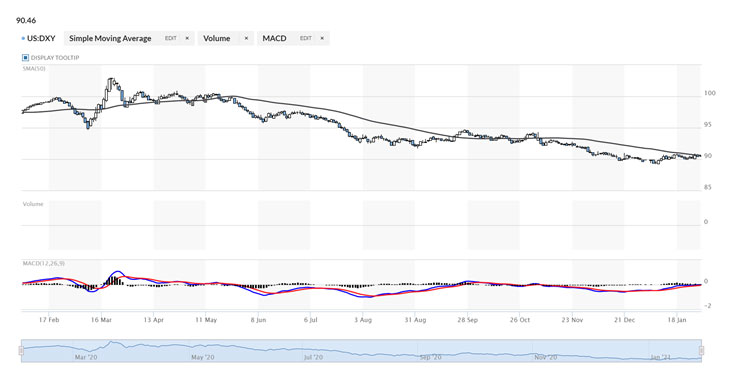 Let’s look again at a few possible scenarios that might play out in 2021. Ranked from most likely to the least likely.

1) BTC will take over from Gold as the major protector of our fiat currency. This is not hard to judge because it is already happening. Janet Yellen was negative on cryptos because of their use in illegal activity (trivial compared to the illegal activity in cash US dollars) in her confirmation hearings as Secretary of the Treasury. The next day, however, she changed her tune a bit after being talked to by some major Wall Street Firms who want BTC to stick around.

2) COVID 19 will be around for a few more years. This assumes that many people will not take a vaccine shot, and we will be unable to reach herd immunity anytime soon. Also, the vaccines were released way too early with only one of five major questions answered for normal Phase III trials. People taking the current vaccines are basically guinea pigs and that’s why people who have been vaccinated still have to wear a mask and practice social distancing. The CDC is now keeping track of death rates after the vaccine (and trying to compare it with normal death rates for people of the same age). We also have the issue of the virus mutating as happened recently in the UK and South Africa. The new strains are much more contagious and in just one month has moved to dozens of more countries.

If COVID 19 is around for a few more years, then –

3) In this scenario, the COVID 19 vaccines are effective and we reach herd immunity levels later this year. World unrest and economic malaise will improve.

4) We will have a major economic crash in 2021. This is not a prediction but just one of the scenarios that could play out in 2021.

For now, staying at home and limiting your contacts to only a few people is essential. This is also the best time possible to get a financial education and work on yourself. We are here ready to help with books, eLearning courses, and online workshops.

Until the February 2021 Update, I am not going anywhere. This is Van Tharp.