Last month, someone commented that they would prefer if I just talked about what was happening in cryptoassets and not about what I expect to happen. We are talking about a market which has a capitalization of a little more than $100 billion. There are several dozen individual stocks with capitalizations higher than the entire crypto market. Why even do a monthly update on cryptos?

I monitor the cryptoasset market because I believe cryptoassets and the blockchain technology behind them represent an institutional revolution – not a technical revolution. Right now institutions determine value and have all the power. Blockchain technology is likely to change all of that by allowing decentralized groups determine value – not just in select areas but across the spectrum of industries around the world. Cryptoassets will communicate value in this new model. Major institutions (and here I include big countries), however, are not going to give up their power easily.

In addition, most institutional investors would love to have some exposure to cryptos because they are uncorrelated with other assets (such as equities) and they offer the potential for huge gains. Pension funds have been looking for huge gains for their portfolios. Currently, however, institutional money is unable to enter cryptoasset positions – but that is changing. I think in the next two years we could easily see 5% of the money that pension funds have flow in cryptoassets. Once pension funds and other institutional investors are able to start entering this asset class, I believe returns from cryptoasset investments will turn out to be a once in a lifetime opportunity. That is the primary reason that I’m even paying attention to the crypto market.

I just finished three research studies of cryptos and will report those findings in subsequent articles. The first is below and the next two will be in the February and March crypto update newsletters.

Once again, I believe that 2019 will probably be a huge year for cryptoassets but until you see an uptrend, staying out of the market is the best policy. The new target date for the opening of the Intercontinental Exchange (ICE) platform BAKKT is now sometime in the Spring. Microsoft and Starbucks among others are partners in the project which will include federally regulated market and custodial services. Typically, institutions cannot hold their own assets so another entity (a custodian) has to hold them. For cryptoassets, there are all sorts of issues around security etc. that have to be overcome.

Now let’s take a look at the Bloomberg Index, the Bloomberg Galaxy Crypto Index. The index tracks ten major cryptoassets: Bitcoin (BTC), Bitcoin Cash (BTC), Ethereum (ETH), Ethereum Classic (ETC), Litecoin (LTC), EOS (EOS), Ripple (XRP), and three privacy coins DASH (DASH), Z-Coin (ZEC), and Monero (XRM). They started the index in May at 1000. It reached a high of 1020.73 on May 4th but the index shows a clear downtrend. In November the index dropped 50% and it’s probably dangerous to invest in this asset class until we at least have two months of stable prices. Here is a graph of the index to date – the graph appears to go back before the index was formed to March and I’m not sure why. 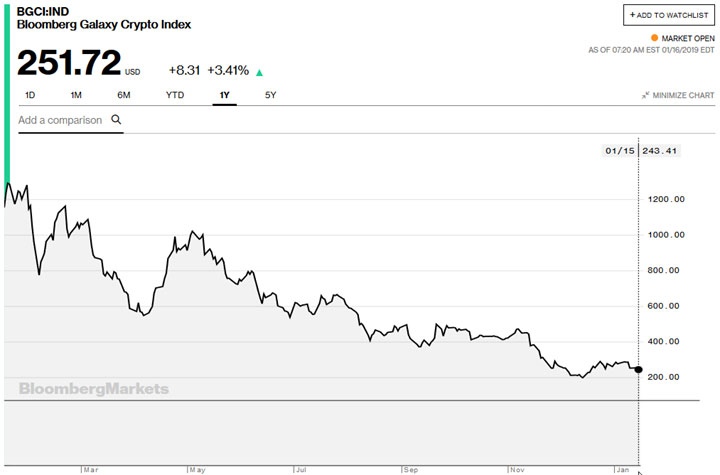 Bitwise also has opened a HOLD 10 private index fund that you can actually invest in. The only difference is that Hold 10 has Stellar (XLM) while the Bloomberg Index holds Ethereum Classic (ETC).

Crytocompare also has an index of ten coins which includes: Bitcoin, Ethereum, Ripple, Bitcoin Cash, EOS, Stellar, Dash, Cardano, and Tronix. So Cardano and Tronix are the two different cryptos held in this index compared to Bloomberg and HOLD 10. 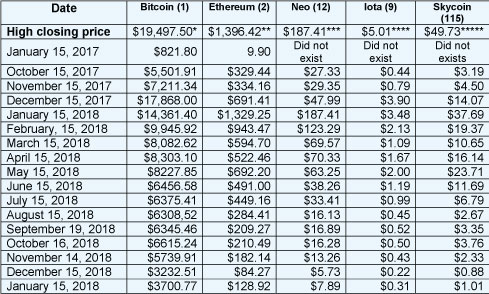 Everything is up over the last month, but that really doesn’t mean that much. I’d like to see 100 days of a solid uptrend in all three of these currencies and in the indices before I’d be willing to make much of a renewed commitment to cryptoassets. Right now, we’ve had one month of uptrend – not 100 days.

The Market Cap for BTC is still under $70 billion. And the overall market cap for the top 100 coins is only $123 billion now – down from over $800 billion at the beginning of the year. But the market cap is up 25% from its lowest point recently at about $100 billion. 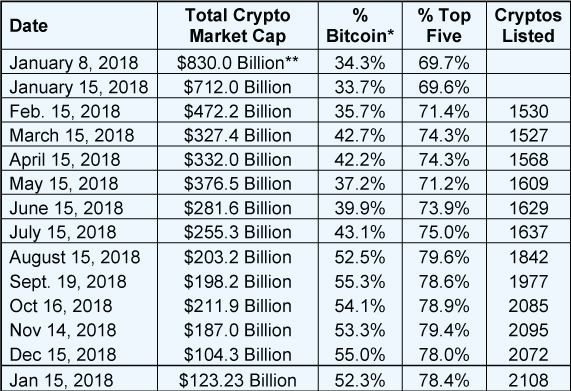 * Bitcoin was as high as 90% of the market cap of all cryptos at the beginning of 2017 to as low as 32% at the top of the market. Part of the difference is that there are now nearly 2000 cryptocurrencies. SO the number keeps going up even though the market cap goes down.

Yahoo Finance lists prices for about 100 cryptocurrencies so I can run some of my normal studies on the data. Here are the top 15 by the Market SQN score (for 100 days) – 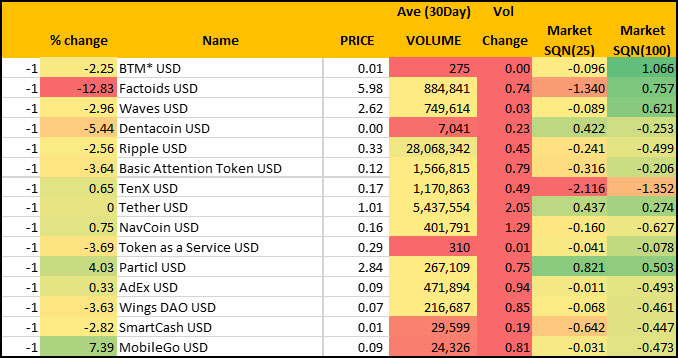 Only two cryptos have a Market SQN score over 1.0 this month and only three of the top 15 coins have positive scores. One of my old favorite coins (FCT) is now the top coin and it has been so for two straight months.

Bitcoin Cash had a hard fork on November 15th. If you own that crypto, you should have it in a wallet or at an exchange where you’ll get the full benefit of the fork. The two new coins went up initially because of the fork, but now two month later, both sides of the fork have a lower equivalent value than BCH had prior to the fork. Bitcoin SV is now considered the inferior coin at it sells for $77.81. The other part of the fork is now called Bitcoin Cash and it’s listed at $128.98. Before the fork, Bitcoin Cash was over $300.

My separate crypto market model calculates a different listing for the top 15 cryptoassets. Notice that the next listing has only nine coins with positive numbers. Of those, however, only three coins are green though that might change with today’s movements in the crypto market. The bottom 15 coins are all red and there are some major coins on that list such as ZEN, DOGE, STEEM, LSK, and ETC. 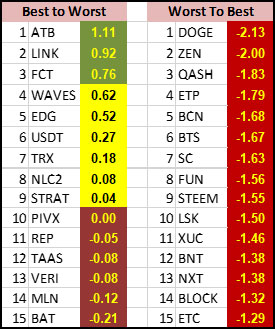 We have also classified the coins by type. We expect to improve this very preliminary version in the coming months.

There are also a number of new coins that might be called stable coins, meaning they represent a fiat currency that is fairly stable. The major crypto exchanges are not using many of them but by some time in 2019, there will be an exit strategy for cryptos into stable coins. These new stable coins can probably be trusted… unlike Tether which has no proof that it is really backed by the US Dollar. The top 50 coins in coin market cap now include several stable coins:

Tether is now ranked at #7. I doubt that any of these coins provide a reliable exit strategy just yet. But this development is probably something to look forward to in 2019.

The next table doesn’t show anything exciting with mostly reds and brown but FCT is there with a green color, however, its Market SQN score is different from the other data set which has it at over 1.0 for the SQN® 100. 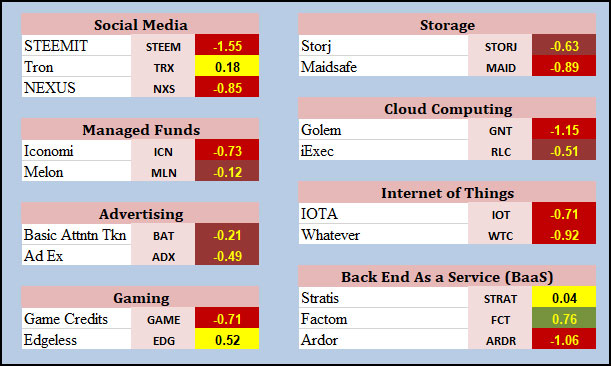 1) I don’t know what Bitcoin is going to do but I would guess the next crypto Bull Market will probably start when ICE comes out with its platform for institutional investors to be able to buy cryptos. That is supposed to happen in the Spring

2) I don’t like BTC because sending is too slow, too expensive, and it currently uses about 1.5% of the world’s electricity – and this will get much worse. Still, it is the base currency for all cryptos.

3) I don’t know if the second and third generation crypto assets (i.e. Iota and Sky) will be the primary vehicles of the future. If they survive, I’m sure there will be lots of changes through forks.

4) I am convinced that blockchain technology is absolutely here to stay and that the revolution taking place will be the biggest in my lifetime. It will change everything.

5) One commentator on cryptoassets says decentralization is an absolute must for any cryptocurrency to be successful. This is true if it is to meet its long-term goals and produce an institutional revolution. But remember that in the near term, institutions will try to take over cryptoassets and any (initial) lack of decentralization will actually be a plus for them.

6) 2018 was a difficult year because of lack of clarity around cryptoassets’ legal status. To some agencies, they are a form of security. To the IRS (and most national taxing authorities), they are property, which means a tax event occurs as soon as you sell any. For example, if you use a bitcoin debit card to buy coffee, you have just created a tax event. Cryptoassets need the $600 exclusion rule that applies to FOREX before it can become a major alternative to other currencies.

7) I just read that if you have more than $10,000 on a foreign crypto exchange at any time of the year, you have to file a form with the government or you’ll be in trouble. So if you bought $10,000 work of crypto on Binance and immediately transferred what you bought to a hard wallet, you would still have to file the form. If you traded cryptos in 2018 (i.e., you bought BTC on Coinbase and then used it to by another crypto on an exchange), then you have a taxable event. BTC was not the same price when you traded it from when you bought it. Thus, you have a gain or loss and in 2018 you most likely had a loss. For example, I had over $5,000 in crypto gains in 2017 and it was mostly from my cryptos going up in value before I exchanged them for something else.

8) In addition, while crypto projects are in their infancy and these small companies have to deal with the SEC, it will be difficult for them to explode into broad adoption. Huge legal issues hamper innovation.

9) There will be ETFs for both BTC and ETH this year. When the SEC approves the new ETFs, BTC and ETH prices will explode and the crypto market in general will take off big time. Yes, the SEC has turned down numerous requests for crypto ETFs, but it will not turn down the CBOE request that will be coming soon.

10) Finally, many of the best traders/investors in the world became that way because they were the in the right place at the right time to find a huge edge. Cryptoassets offer this kind of edge.

11) We will hold a special crypto workshop for the Super Traders in June. That will be our third crypto event for them. (Exclusive to Super Traders.)

12) Gabriel Grammatidis will teach people how to use his trading systems to trade crypto in his June 2019 at his workshop. (Open to the public.)

I will be traveling until mid-April 2019. Therefore, RJ may be writing the next few crypto updates.

The purpose of this report is to just give you a status quo of the cryptoasset markets. It’s not meant to give recommendations or be predictive in any way.