Normally at Halloween, the only madness that I have to put up with is an incomprehensible number of Halloween costume shops that open up for six weeks in every vacant storefront. They apparently do quite well because, in my neck of the woods, they’re stinkin’ everywhere. But here’s something that is actually much more useful for the Halloween season…

For more than a decade I’ve written columns for Van and his team in the Tharp’s Thoughts newsletter. One of my favorite research areas continues to be old Wall Street sayings that purport to give seasonal bits of advice for investors. Every few years, I like to check how some of the seasonal indicators are working. Here is a sampling of previous seasonal pieces of advice that I have confirmed or busted in past articles:

And, that brings us to the Halloween Indicator. 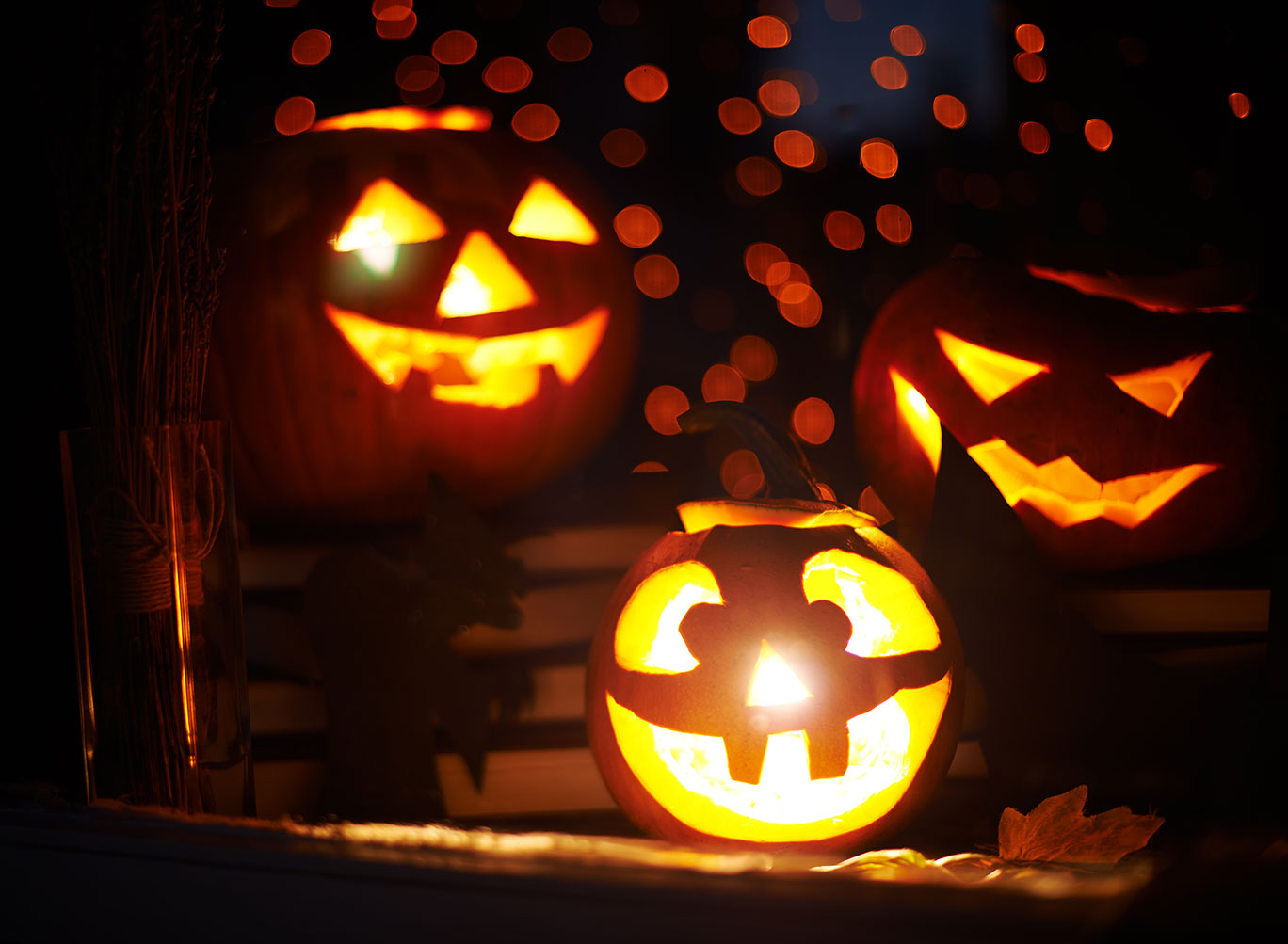 The Halloween Indicator: It Keeps Working

As you can tell, Wall Street has no shortage of sayings. Many of the old bromides fail to stand up to scrutiny but one that has proven itself useful time and again is “Sell in May and go away…”. If you buy back in at Halloween (the end of October), then you are following “The Best Six Months” strategy. People know this seasonal tendency more popularly as the “Halloween Indicator.”

Why do I like this seasonal trend so much? Because it just plain works.

That’s not just a personal perception either. Two peer-reviewed papers show how well this seasonal tendency has worked – for centuries. Bouman and Jacobsen published a paper in 2001 in the American Economic Review that showed how the November to April time frame outperformed the May to October period by a statistically significant amount. Here is their conclusion:

“Surprisingly, we find this inherited wisdom to be true in 36 of the 37 developed and emerging markets studied in our sample. The ‘Sell in May’ effect tends to be particularly strong in European countries and is robust over time. Sample evidence, for instance, shows that in the UK the effect has been noticeable since 1694.”

The following two charts show how striking the outperformance is across developed countries: 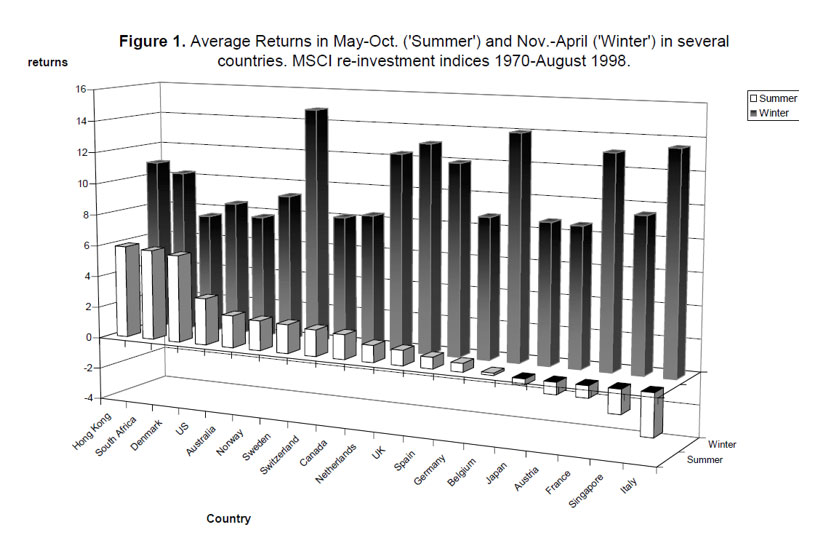 And this one shows similarly impressive results in the emerging markets: 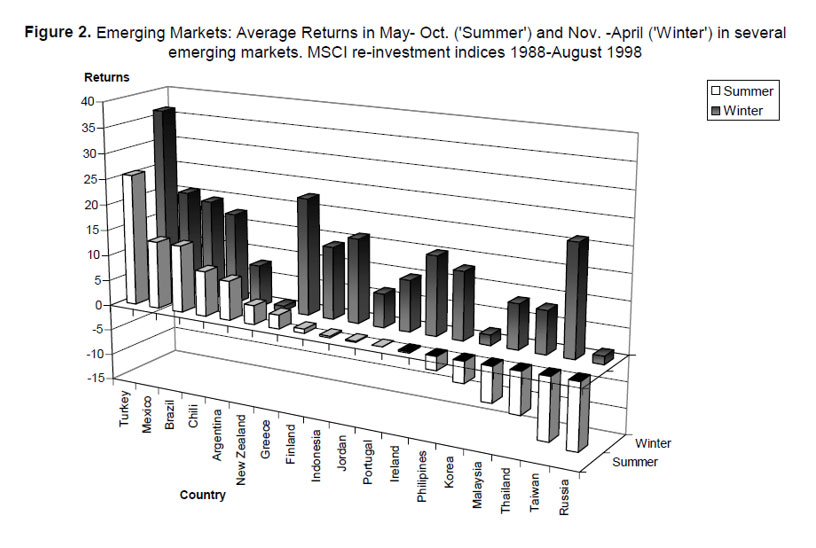 Support for this great seasonal tendency doesn’t stop with that one study. An impressive and far-reaching academic paper published in October of 2014, Jacobsen and Zhang expanded Jacobsen’s work from 2001 and updated the data. They found that the “Best Six Months” had statistically significant outperformance in all 108 out of 109 active stock markets in the world! (The lone exception? An island country in the middle of the Indian Ocean called Mauritius.) Here’s their chart that shows the vast outperformance for the “Best Six Months” vs. buy and hold: 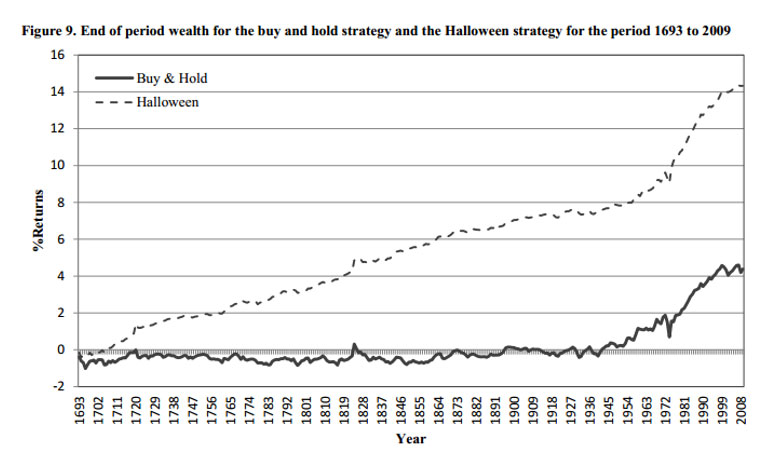 That outperformance is stunning. The authors go on to show that the outperformance of the six best months’ vs six worst has grown stronger during the most recent decades. The graph below shows the size of the Halloween effect (the difference between 6-month returns November-April and May-October) for 31 ten-year sub-periods from 109 pooled countries over the period 1693-2011:

Most of the seasonal effects mentioned at the beginning of the article have shown dwindling effectiveness as more people find out about them and try to exploit them earlier, etc. That’s just not the case, however, for the Halloween Effect! I’ve crunched the new numbers for you and, despite the fact that since March of 2009, we’ve experienced one of the strongest and longest bull markets of this century, the Halloween indicator is still holding true. The Six Worst Months vastly underperformed in the following years (all numbers are percentages):

That’s 9 out of 10 years in a strong bull market where the strategy worked. Dang, this thing’s good! It’s a seasonal trend that just keeps on working and like a fine wine, it seems to be getting better with age.

2020, however, will start out this decade with a losing year for the Halloween Indicator. The March Coronavirus cliff dive was just too much of a decline to overcome for a traditional six best months strategy. May through September have been the really strong months for this year. This year’s performance, however, doesn’t dampen my enthusiasm for this great indicator that has stood the test of centuries.

I always love to hear your thoughts and feedback – just send an email to drbarton “at” vantharp.com.