Almost every week someone asks me whether or not this is the market top and every time I have a similar answer – until the money stops pouring in, none of the “lesser” issues matter very much. Technicals, sentiment, geopolitical issues, Covid news – all of that has had fleeting effects on the equity markets. Why? The power of using the narrative to inform our investing choices is as evident as ever. Today, we’re going to touch on the current narrative briefly and review a few charts that show what I see driving the markets. Then we’ll touch on what could alter the current narrative that is one concept that rules them all.

From Growth to Pandemic

As a reminder, the market narrative is the overarching concept that acts as THE central market driver. After the 2016 U.S. Presidential election, that narrative was the Trump administration’s growth agenda based on lower taxes and less regulation. With some deep pullbacks mixed in thanks to the trade war China, that was the dominant narrative up until the start of the pandemic.

Then the narrative quickly shifted to what I call the “money storm” narrative. We’ve discussed multiple times in this space the power of stimulus – both monetary (central bank policy) and fiscal (governments granting direct payments to companies and citizens). We can see the results of the money storm best in these two charts: 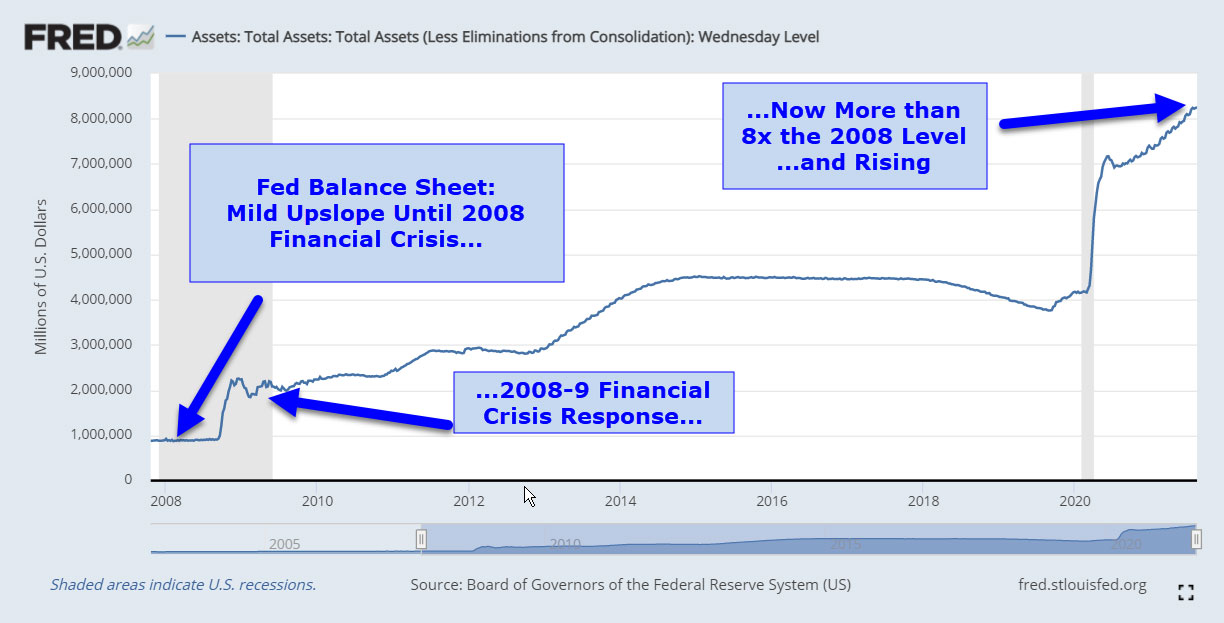 And combined with fiscal stimulus, U.S. private savings have skyrocketed during the pandemic:

Much of that money from these three huge increases is going to find its way into the stock market – and into other assets classes. We have all seen the price increases in cryptocurrencies, real estate, and commodities. Of course, price increases don’t happen in a straight line but for U.S. equities, every little pullback has been met with a push to all-time highs.

We’ve seen 50 new all-time highs in the S&P 500 this year – and at least one in each of the eight months so far. The S&P chart below plainly shows the effect of the “money storm”:

Some negative news or sentiment – Covid related or not – meets every new high and causes a pullback. Each pullback has been brief as it is overwhelmed by people and institutions driven by the fear of missing out (FOMO). This week’s run-up will undoubtedly be met by another piece of negative news. We’ll see a pullback. Permabears will start asking if this is now the beginning of the end. Then the market will recover from the pullback and rise to another new high. Lather. Rinse. Repeat.

What could end this market narrative that overpowers every other? Perhaps not surprisingly, anything that slows the flow of money. First and foremost, whenever the Fed starts to taper the monthly bond purchases. When that happens, I fully expect another market taper tantrum as we saw in 2013 when the Fed tried to start closing the monetary stimulus spigot. Two other items could also alter the narrative: a disruption in the fiscal stimulus (like a defeat or further watering down of the infrastructure stimulus bill) or the continued building of inflation. If the latter occurs, then the transitory part of the “transitory inflation” story would prove false and would confirm that that the Fed needs to stop adding fuel to the fire.

Until one or more of these reduction scenarios plays out for the money storm, there’s no reason to expect the market to override the narrative.

I always love to hear thoughts and comments – and especially your additional insights(!) – please send them to drbarton “at” vantharp.com