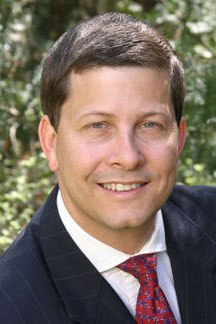 Regardless of one’s spiritual leanings, the Christmas season is a time of year that has a different vibe. The pace around us quickens. If you can look past the few curmudgeons at your overly crowded local mall, an attitude of cheerfulness seems to be the pervasive one. And, for those of us who can see past the blatant commercialization that seems to accost us from all directions (since sometime in October…), some of the joy, hope, and love of the season seeps in. Family members are calling to arrange visits for later in the month. And we set out decorations that provide a pleasant reminder of our personal reason to celebrate.

As for my family, we’re planning a trip with my adult kids and their significant others, taking a break from jobs and medical school to make a pilgrimage to see my 88-year-old dad, who still lives by himself in the house I grew up in. I can say that I’m certainly in a state of joy. It’s a nice place to be.

The markets usually manage their own form of “joy” at this time of year as the optimism of the populace seems to bleed over into stock prices. This observation is backed up by the fact that the S&P 500 index has provided positive returns during 52 of the past 69 Decembers for a win rate a little above 75%. And, according to research done by LPL Financial, the second half of the month is stronger than the first. As can be seen in the chart below, this second half of the month outperformance is even more prevalent when we’ve had a negative November (as we just did) or when the S&P is up 20% at the end of November (as was true this year): 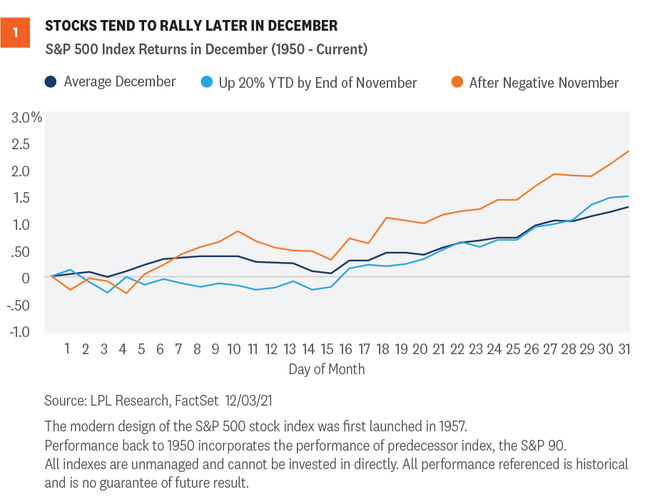 The January Effect – Has It Been Affected by Recent Events?

Many of our readers have heard of the January Effect – where small-capitalization stocks have historically outperformed their large-cap brethren during the month of January (I last wrote a full article about it in this space in 2016). This big outperformance by the small-caps was very clear in the second half of the 20th century with Hirsch and Hirsch reporting in the Stock Trader’s Almanac that small-caps far outpaced big-caps during January for 40 out of 43 years between 1953 and 1995. During that time, small-caps gave an absolute performance improvement that was staggering. The Wall Street Journal reports a small-cap outperformance of 5.1% vs large-caps during the decade of the 1970s. To put it another way, a $100,000 portfolio invested in small-caps would return $5,100 more than one invested in only large-caps during the month of January. That’s a huge single-month edge.

Since then, it seems like everyone has jumped on this bandwagon and the edge has steadily diminished down to only a 1% edge in the 1990s.

However, there is good news (that is coming up fast upon us) on the small-cap outperformance front. The Stock Trader’s Almanac reports that the January effect is still working. It’s just working earlier.

Since the 1987 crash, moving the entry date back to December 15th has worked wonders. The numbers show a small-cap outperformance from December 15th to December 31st of 85% (3.5% vs. 1.9%). And the effect remains viable though less strong if held through the middle or end of January.

This year, small-cap stocks have been underperforming since mid-March as we see on this chart that shows the ratio of the IWM (Russell 2000 Index) vs. SPY (S&P 500), making small-caps ripe for a regression toward the mean:

The January Effect is a seasonal tendency with a strong track record that is built on a broader foundation of overall market strength in December. Like all seasonals, it won’t work every year, but this one merits a close look perhaps a trade with your normal risk parameters attached.

Your thoughts and comments are always welcome. Please send them to drbarton “at” vantharp.com