First, Biden defeated Trump, so what can we expect? Probably better relationships with most other countries and hopefully, a massive effort toward green energy to ameliorate the impact of global warming. I would expect to see changes in health insurance – and not for the better. In my opinion the problems lie in allopathic medicine and its huge cost – not in how the costs are paid for through insurance or otherwise. We will probably have another round of stimulus checks and perhaps more loans to corporations. We will possibly see higher taxes for those making over $400,000, but probably not until 2022. We will also see a more humane approach to immigration – rather than one that views immigrants as a threat to America. We will probably have a normal amount of political manipulations, but we will not have a president (I hope) trying to rewrite the rules to get more power. Lastly, we can expect to have a president who does not continually lie to the public.

These predictions depend upon the two Senate seats in Georgia. I’m writing this article in the first days of January before the special election on January 5. If the Democrats win both seats, then Biden can probably get most of what he wants. If the Republicans take at least one seat, then Biden will have to do a lot of comprising to get things done. We will probably not see higher taxes in 2021 because I’m sure Biden understands the additional damage that could do to the economy.

What else is going on? The stock market and cryptos are both booming – because the Fed stimulus goes into markets, not the economy. That is probably more likely to continue under Biden than Trump because the Democrats really want to help out those who are suffering from COVID-19. I expect restrictions due to COVID-19 to last throughout 2021.

Right now, COVID-19 cases are setting new records. As of January 3rd, we have had 20.7 million cases in the US and 352,000 deaths. Those numbers are both up about 40% in a single month and represent 6.4% and 0.11% of the population, respectively. Last month I said I only personally knew of two people who have had it and only one was from the U.S. One month later, I know of five people who have had it (including one of our staff members) and four of them were from the US.

Americans are not taking the Coronavirus seriously, especially when the average person weighs the risks and rewards of the situation. Let’s see, I might be sick for two weeks and the chance I would die is remote versus I can’t work or do what I want to have fun. The real problem is that our hospitals are full of serious cases and there’s no room for more. 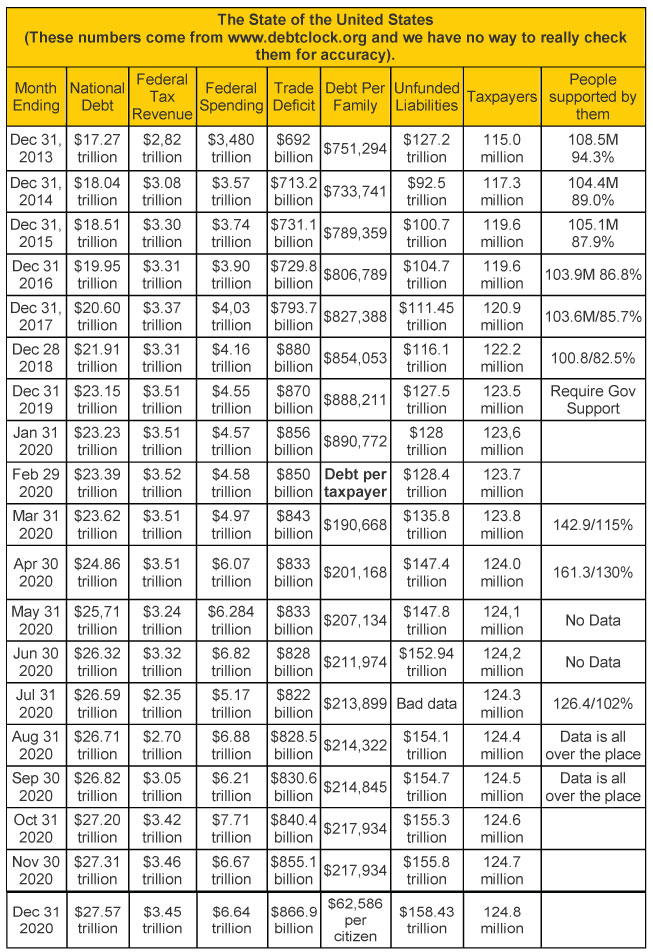 This month’s figures don’t yet show the impact of the new COVID-19 spending bill but it should start to show up next month. Think about it – the new stimulus bill handed out $600 per person or $2,400 for a family of four for everyone making under $75,000. If you are working and receiving your regular salary, however, then you don’t need the stimulus – and that’s a majority of Americans. But if you are unemployed and you need several thousand per month to live on – then the stimulus check does very little. So it’s really misplaced money.

Notice that the number of U.S. taxpayers in the table continues to rise – despite the media emphasis on COVID-19 deaths. The unofficial debt went from $153 trillion mid-year and now is listed at $158.43 trillion, up by $3 trillion just last month.

The second table tracks money supply figures, credit card debt, and the number of millionaires. We have about 50,000 more millionaires in the US than we did last month and they make up about 5.5% of the US population.

Notice that we’ve had six straight months in which the number of US Millionaires has gone up.

So now our measured periods are either Bull to Strong Bull.

Let’s take a look at the weekly bar chart below for the S&P 500. The market made about a $7 trillion recovery since the bottom and was setting new highs. The S&P made 15 all-time highs during the month of August, and started making them again towards the end of November.

The chart below shows the extreme changes in the market type direction which occurred quite suddenly – the fastest I have ever seen. Look at the huge rise in July, the return to Neutral in October and now we are Bull again.

The next chart shows the volatility measurement for the last twelve months. At the beginning of the year, volatility had been in the quiet zone for months, and then suddenly it went to volatile on its way to very volatile in March. We have moved from a quick dip into quiet in September to volatile over the last few months and are now back down to quiet.

The next table shows the weekly changes for the four major stock indices for the last month and recent annual closing prices. The Dow was up 7.25% on the year. The S&P was up 16% while the NASDAQ was up over 47%. It’s the AAPL, Amazon, Google, Facebook, Microsoft phenomenon that I talked about – money is flowing into a few stocks, but those stocks heavily influence the NASDAQ 100. Small-cap stocks have been crushed for most of the year, but the Russell 2000 index was up last month.

Just to make clear the effects of the top ten gaining stocks on the S&P, look at how much they moved in 2020. Tesla, the top-performing stock, was not in the index for most of the year.

Three components of the model signaled inflation in December again – and that’s been going on since August. The model assumes, however, that financial services won’t do as well in a strong inflation environment – so it has a negative score in the model. 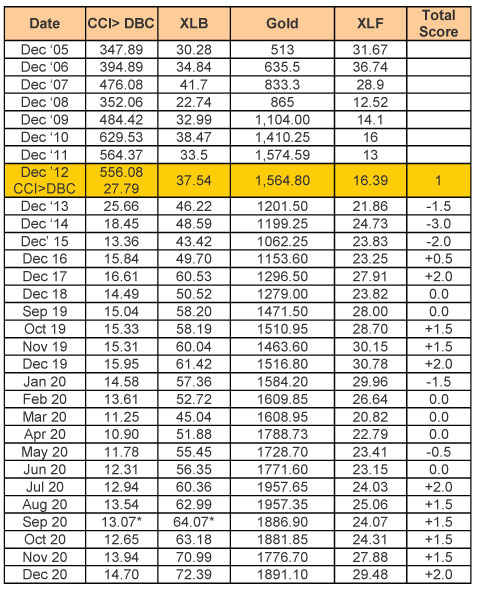 Inflation has been at +1.5 for the past four months and is now at 2.0 out of a possible score of 3.0 –a definite inflation signal.

Shadowstats.com adjusts the GDP by the original inflation calculation suggests that we have been in a recession since 2000 with just one quarter of non-recession. The US GDP from April to June plunged 34.3% on an annualized basis – that is the worst drop ever. But stocks are in a strong bull market and we’ve had a slight recovery in the GDP. According to Shadowstats.com, the real GDP data is even worse.

USD closed at about 103 in March. On Dec 31st, 2020, it was 89.94. That’s a 12-point drop in six months and a 3% drop in the last month. Our World Market Model (see the SQN Report article below) has the US dollar ETF (UUP) now red and it is the 2nd worst performing ETF of the 500 plus that we track. The worst performing ETF in the model also tracks the US Dollar. That’s one reason why the whole SQN® Report and table looks so bullish (green) – everything is measured relative to the value of the US Dollar.

For most of you reading this, the US Dollar is your base currency. Donald Trump has overseen an increase in our debt of about $8 trillion during his administration, with $5 trillion of that coming in the last year.

We have had a worldwide economic and market crash because of the Coronavirus pandemic. After some improvement and re-openings, much of the world is returning to partial or total lockdowns. We have a new president but still do not know if he’ll have enough votes in both houses of Congress to get anything significant done.

Here are a few possible scenarios that might play out in 2021. Ranked from most likely to the least likely.

1) BTC will take over from Gold as the major protector of our fiat currency. This is not hard to judge because it is already happening.

2) COVID-19 will not go away this year and will be around for a few more years. This assumes that many people will not take the vaccine and we will be unable to reach herd immunity. We also have the issue of the virus mutating as has happened recently in the UK. That new strain is much more contagious and in just one month has moved to 33 different countries. If COVID-19 is around for a few more years, then –

3) The COVID-19 vaccines will be effective, and we reach herd immunity levels. The world unrest and economic malaise will improve.

I have a number of other scenarios laid out that we’ll discuss in the Blueprint workshop starting this Friday January 8th. Due to the new 12-week format for Blueprint, students will be able to develop comprehensive business handbooks rather than just knowing what they need to do after finishing the three-day live workshop.

Before I close I’d like to talk about one more stock, last year’s top-performing stock, TESLA. I bought a Tesla Model S in December 2014. At the time, I thought 1) I’d have a fully automated car by now; 2) that I’d take a driving trip around the US every year (rather than just 2015, 2016, and 2017); 3) Tesla had absolutely the best customer service possible. But I have never owned Tesla stock. Why?

On the positive side, I notice that Porsche is advertising the first electric sports car. I priced one out and by the time I had all the options I wanted, the car was $150,000. That’s more expensive than Tesla’s latest 3-motor Model S (with about double the horsepower of the Porsche and a lot more room in the car). And the Porsche doesn’t even come close to the new Tesla roadster planned for some time in the future.

For now, staying at home and limiting your contacts to only a few people is essential. This is also the best time possible to get a financial education and work on yourself. We are here ready to help with books, eLearning courses, and online workshops.

Until February 2021, I am not going anywhere, this is Van Tharp.