Generally, 2018 was a disaster for the crypto market. The market cap of the top 100 cryptos dropped from around $555 billion (still well under the market cap of AAPL stock) to about $124 billion – pretty much the value of a large cap stock. Knowing it was a disaster, I decided to look at what would have happened if someone had put $100 into each of the top 100 in market cap the end of 2017. Did anything go up in 2018? What was the likelihood of a top 100 in market cap totally disappearing? How many coins stayed in the top 100?

You can now get historical data from www.coinmarketcap.com, so the first step was to download the Dec 31st 2017 data. The next step was to assume that you bought $100 worth of each coin for a total investment of $10,000. I didn’t exclude anything in this study, but I probably would have excluded stablecoins since their value should stay the same. I would have excluded obvious Ponzi schemes and scams which I could have been done just by doing a little research on each coin, however, I didn’t do that. It was simply – buy $100 worth of each coin in the top 100.

So did anything do well? The table below shows the top 11 coins in terms of performance from the top 100. 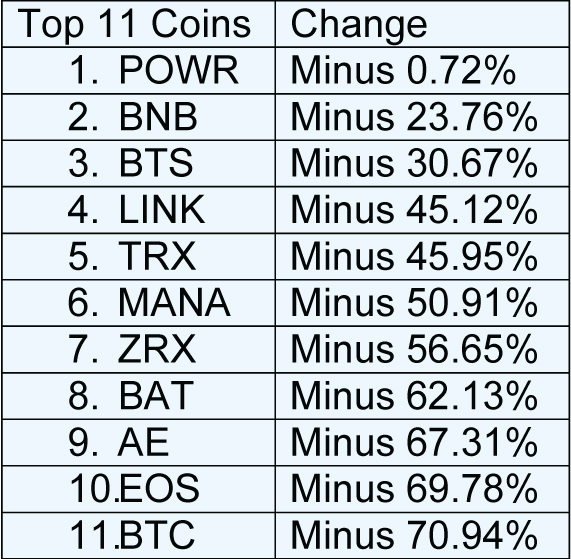 None of the top coins increased in value over 2018. None.

I like POWR because it’s an Australian owned coin that helps with the conversion to green energy. I mentioned it as one of two notable coins at the Super Trader Summit in December.

At the Super Trader crypto workshop last June, I mentioned Binance Coin (BNB) because it was one of the most stable coins at that time. When I said that, BNB was about $16.50, however, it’s currently trading at $6.10 so it hasn’t been that stable.

Tron (TRX at #5) was interesting. I own a coin (CND) which is likely held by a number of investment professionals. It is a prediction coin with artificial intelligence powering it. Depending on your stake, you get regular predictions about what various cryptoassets (and other assets sometimes) will do with a probability ranking for the predictions. For example, if you own a million coins and have them registered, then you get EXPERT level predictions which means everything. I’m not recommending CND because it’s down about 88% over the year (slightly worse than average) and it’s actually selling for less than its issue price of a penny.

CND is an Ethereum based token, so you can store it in My Ether Wallet. In that wallet, you can see the size of the token ownership stakes and if the same owners keep other ether-based tokens in that wallet at the same address, you can see what else they own. I looked up the portfolios of 3-4 of the CND whales (those who owned the most) and they all seemed to also have huge positions in Tron. I’m not sure why they liked Tron but it was obviously one of the smaller losers for 2018 if that means anything.

I’ve done two more studies that will accompany the crypto updates in the next two months. Next month, we’ll talk about what happened if you had invested $100 in each of the top 100 coins on Dec 31, 2016 and held them for a year. 2017 saw huge gains that were much larger than the 2018 decrease.