Two months ago, I reviewed the disastrous performance of the top 100 cryptocurrencies from Dec 31, 2017 through December 31, 2018. Had you invested equally in each of the top 100 cryptos, you would have been down by about 85% one year later. No crypto coin price increased in our study of 2018.

This month we’ll do a different study. The market was very unstable before 2015 so we will make the following assumptions:

The first table show the coins purchased on Dec 31st 2014. We only purchase 24 coins because one of them was a stablecoin – that is it’s value is tied to the US Dollar so it is designed to be stable and not appreciate. Our initial investment is $2,400. 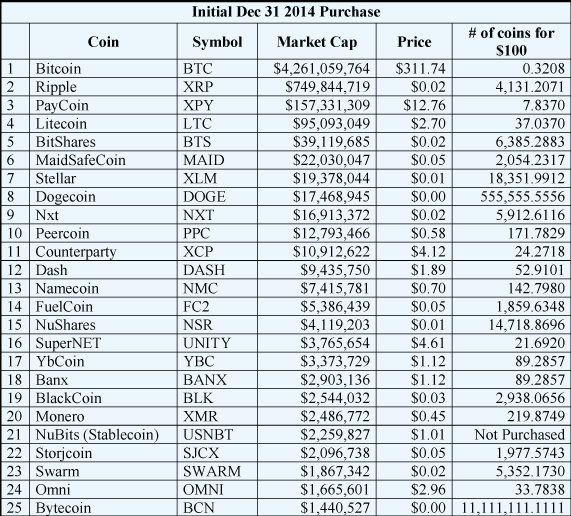 The next table shows the value of the coins on December 31, 2015 plus three new coins purchased at the end of 2015. 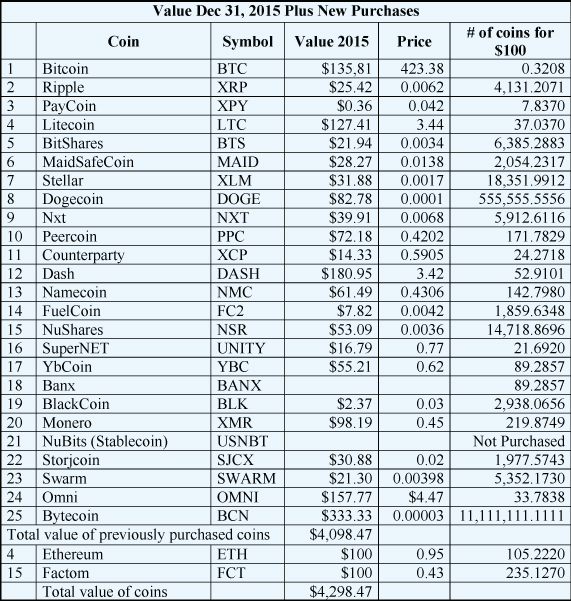 The next table shows the value of the coins on December 31st, 2016. 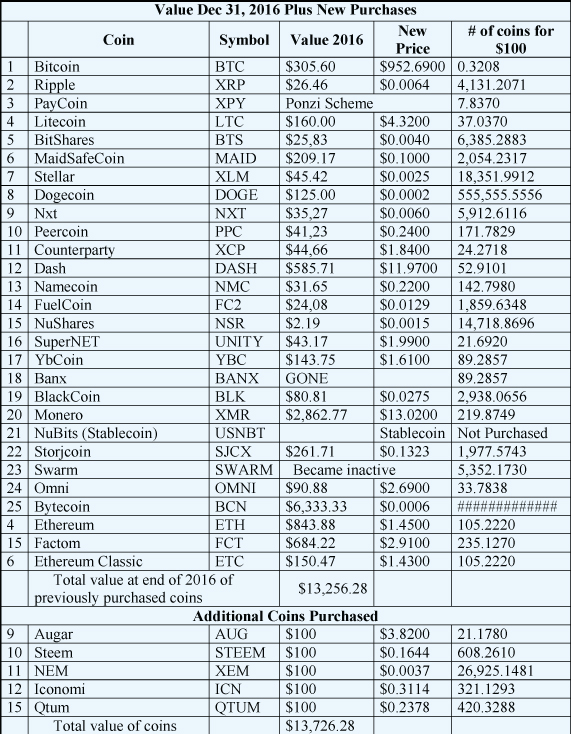 Eleven of our 25 coins are now up. But BCN and XMR have huge gains. We’ve lost a second coin which turned out to be a Ponzi scheme, XYP.

We’ve added one new coin through a spinoff of ETH, Ethereum Classic of ETC. We have the same number of coins as we had with ETH or 105.222 and that went up in value about 50%.

The next table shows our coin purchases at the end of 2017. 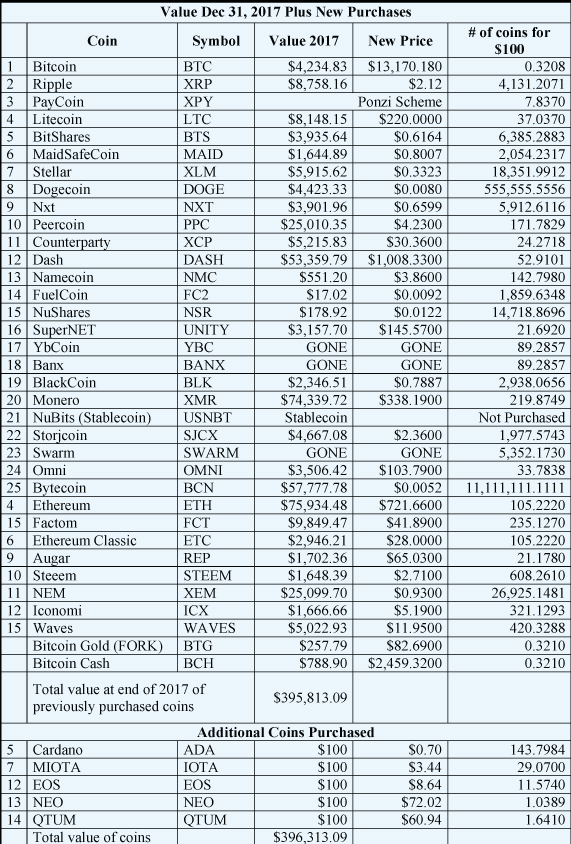 You have six outstanding coins in which your investment has moved significantly. From $100 to

ETH also has a fork ETC which you got for free which adds another $2,946 to its value. Perhaps there should be an exit rule for these (but we don’t have any) and one of these coins disappear in 2018.

The next table shows what happened to our $3,600 investment at the end of 2018 when you would have had about an 81% drawdown. And remember, we didn’t sell anything when some coins were up 250 to 750 times our original investment. 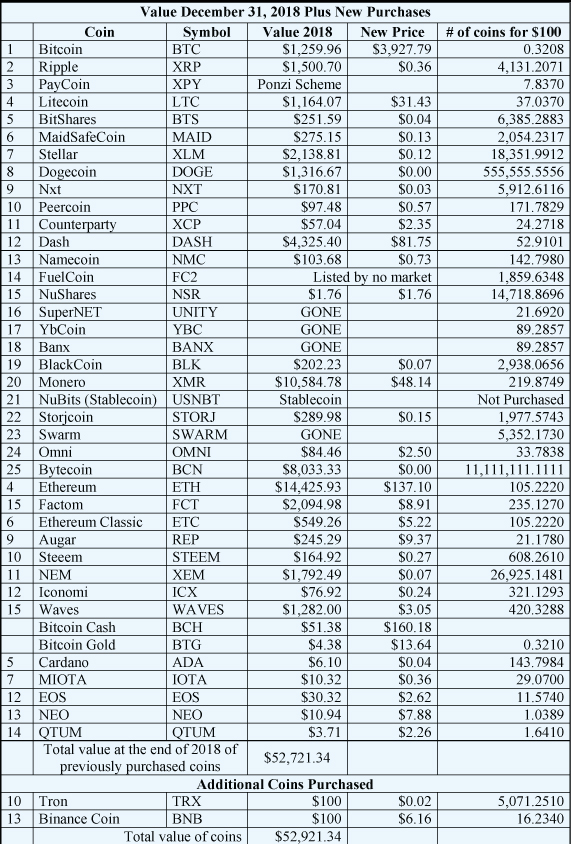 We now have seven coins that have basically disappeared. Actually, NSR and FC2 are still listed in coinmarketcap.com but they are worthless and have no market. We are adding two new coins which have worked their way into the top 15 market caps — TRX and BNB. So now we have invested $3,800 and we own 35 coins with our two new investments.

Finally, the last table shows the value of these coins on March 15th — 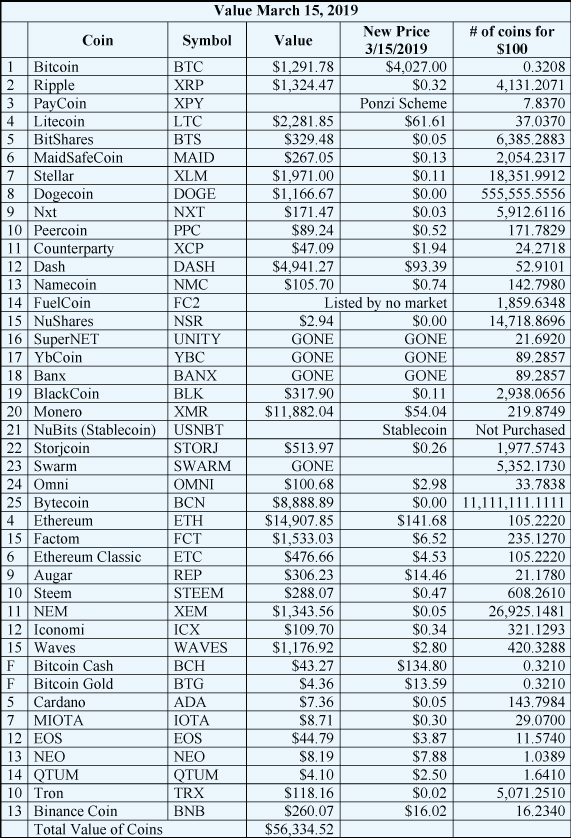