Ever since COVID-19 started spreading across the globe, there has been another pandemic spreading right along with it.

It gets few headlines. It’s invisible to the naked eye.

But it’s everywhere . . . and it’s very dangerous for you and your family.

I’m talking about the pandemic of misinformation, conspiracy theories, and downright lies about COVID-19.

COVID-19 has turned the world upside down and scientists are researching the brand-new virus. Meanwhile, the rest of us are looking for answers. Thanks to the over-politicization of any and all topics in the world these days, plenty of people in the Media and online readily supply “answers” when in truth, these are half-baked guesses.

To protect yourself, your family, and your economic well being, you need to know what’s really going on. So today, let’s dig into some of the most prevalent myths many popular pundits, self-important voices, and self-serving politicians are promoting and compare that to what we really know.

Before we get going, I asked myself if I felt comfortable and if I should even weigh in on this topic at all. I do feel comfortable and as a trained chemical engineer who was awarded the highest level of licensing, I have some credentials for sorting through a maelstrom of scientific and non-scientific information. I have experience separating signal from noise and understanding how to apply that information usefully. I have also leaned on experts credentialed in science, medicine, decision and risk analysis and crisis management. So if that makes sense as a starting point, let’s dig in.

This is a very misleading claim.

The COVID-19 disease is caused by a new virus called SARS-CoV-2 which has never been seen before in humans. This new virus is unrelated to influenza and common cold viruses and has spread across the globe much faster than any flu or other virus ever has. Scientists say the speed of that transmission comes down to two facts –

On that first point, about 80% of people who catch this virus show no symptoms or so-called “mild” symptoms but don’t be fooled: mild only means that you don’t have to be hospitalized. This includes truly mild symptoms like having a slight fever or cold-like symptoms. “Mild” for COVID-19, however, also applies to people who are bed-ridden for weeks and who have trouble breathing normally for weeks. The other 20% with more than the “mild” symptoms have to be hospitalized, provided with oxygen, and even put on ventilators.

In short, SARS-CoV-2 is quite unlike the seasonal flu or the common cold.

This belief relates to the first claim but COVID-19 is in fact very deadly. Official data currently puts U.S. deaths from COVID-19 at more than 60,000 (as of May 29). Compare that to the 34,200 Americans who died from the seasonal flu in the whole 2018-19 flu period, according to the Centers for Disease Control and Prevention (CDC).

And keep in mind that the first U.S. COVID-19 death happened only in late February. So in just two months, this pandemic has killed many more Americans than the flu does in an average year.

Another way to visualize the impact is to look at some data from New York City, the epicenter of the U.S. outbreak. The following chart from the New York Times shows all forms of death in the city back to 2000. The dotted line shows the expected deaths, and the red line shows the actual deaths. 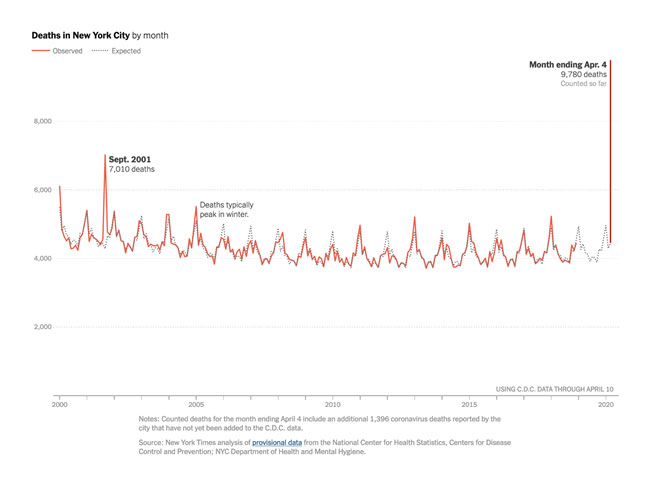 As you can see, the spike in deaths from early March through early April is unprecedented in the last 20 years – including the September 11, 2001 terrorist attack. The red line shows why hospitals in NY were overflowing and why the morgues were so full the city had to bring in freezer trucks to store bodies.

This pandemic is a very big deal.

Claim #3: “The virus is a Chinese bio-weapon intentionally or accidentally let loose from a lab.”

This claim has been getting a lot of traction – even with some politicians. I read about this possibility and at first thought, the tinfoil hat people were behind it. There are some circumstantial signs, however, that make this worth considering and I believe now that there is a non-zero chance that the lab source has become a plausible account.

Supposedly, the outbreak of COVID-19 started in the Huanan Seafood Market in Wuhan which sells live land animals. The very first identified case of COVID-19, however, was a Wuhan resident who to this day had no known connection to that market. The details of this first infection open the possibility that the Huanan outbreak originated from some third source. Of course, it also means that the tracing of the first contractor’s contacts with Huanan Market is incomplete and that he could have unknowingly contracted the virus from someone who had been to the market.

All the while, the Wuhan National Biosafety Laboratory sits just miles away from the Huanan market. The lab has the highest security grade a disease lab can get because this facility performs research and testing on potentially dangerous diseases. It was founded in 2018 as a joint project with France to increase biosafety in China and was the first P4 lab in the country.

The closeness of this lab to the Huanan Seafood Market and previous reports about lapses in safety protocols have caused politicians to request an official investigation. After all, a patient without any known connection to the first outbreak combined with a maximum security biosafety lab next door makes for a good story.

It’s still very plausible that this new coronavirus jumped from animals to humans as many viruses have done in the past. Supporting the animal to human jump theory, a highly-regarded research paper published in Nature Medicine, https://www.nature.com/articles/s41591-020-0820-9 explains that the SARS-CoV-2 virus has features that make it a very unlikely bioweapon and unlikely to have been accidentally released from a lab.

Both of those features have been linked to past viruses that jumped from animals to humans. Researchers also point out that this virus carries signs of having evolved in bats and pangolins (scaly anteaters) or related animals.

Is it true the virus came from the lab or came from an animal in the Huanan market? We just don’t know – but –neither is out of the question.

The evidence on whether wearing a mask protects you from airborne diseases is mixed. Some studies show it does help. Other studies show masks don’t help – likely because masks vary widely in how well they block unfiltered air and the particle size they let through. While particle size is crucial and varies from disease to disease, the main purpose of wearing masks in public right now is not to protect the wearer – it’s to protect others. Remember that many people who have the virus show no symptoms early in the infection – or no symptoms at all ever. The air these carriers breathe out, not to mention their coughs or sneezes, spreads the viruses without them knowing it.

That’s why it’s so important that we wear masks even when we think we don’t have the virus. In a way, we all have to act as if we are carriers of the virus – because we might be. Until we have widespread testing, we won’t know. After all, a mask is a minor inconvenience compared to suffering through some of the “mild” symptoms that COVID-19 can bring on. Covering your mouth and nose outside will stop any cough or sneeze from spreading any virus you may have to others or to an object that could then infect a passerby. One small study from Hong Kong suggests masks will stop even smaller pathogens just in your breath. That study, however, did not deal with the SARS-CoV-2 virus, so we need a more definitive study of the topic.

For hospital settings, the evidence is clear that the advanced healthcare versions of N95 masks do protect people from airborne disease. The procedures for properly putting these masks on and taking them off, however, are quite complex in order to avoid contaminating the inside of the mask. The rules are too cumbersome for the public to follow which is likely why use of N95 masks does not show the same benefits for the general public.

Bottom line – when you’re out in public, wear a mask or a bandana or anything that covers your nose and mouth. It’s a selfless act that really helps.

For now, know that this pandemic will take more than a few weeks to run its course. We’ll all be back to normal – but that’s down the road a bit.

Investors and Traders – Here’s What To Do Now

Investors – If you hold lots of cash and are worried about missing the big bull run up from here, take heart – there’s more choppy volatility coming, and yes, most likely some more downside too. If you are fully invested already, put some hedges in place or have a get out point.

Swing Traders – I still like playing the short side after pops in price on the most vulnerable sectors like airline, hotels, cruise lines and casinos that are going to have a hard time luring back customers. My favorites to play? BA, DAL, CCL and LVS. On the flip side, continue to buy shares or short-term calls (or spreads) in stay-at-home darlings on price drops. My favorites: TDOC, CTXS, DOCU and AMZN. If you like to buy volatile stocks on pullbacks try ZM or WORK.

Day Traders – Expect the volatile intraday and day-to-day moves to continue. Shorter timeframe trading is key and be ready to trade both the stimulus money pops and the bad economic news one-day drops. We’ll be getting plenty of both for some time to come.

Remember to send me your thoughts on this article and any other “I wonder if that’s a myth or if it’s true” issues to drbarton “at” vantharp.com

Great trading, stay safe out there, and God bless you,