What did September bring to the markets?

Well, in case you have missed the news lately, there’s a lot going on in the world. When you look at the World Market Model below, however, the table looks pretty similar to the tables from a number of months this year—lots of red and brown and some yellow symbols. In the last few months, there’s been only one green ETF—UUP. But this month, we have a second. Interestingly, Biotech (XBI) is also green. We’ll revisit the USD topic later in the article but its strength has ubiquitous effects throughout the symbols in the database. 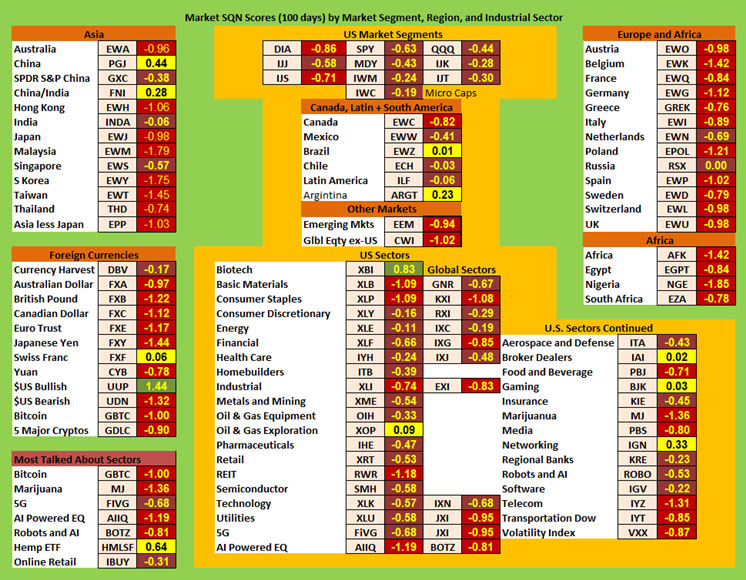 How would you characterize the table this month? You could describe the geographies, currencies, segments, and sectors pretty similarly:

Can the picture get worse? Possibly, yes. Will it get better? Eventually.

Notice by those questions and answers that red/brown (bearish) implies bad and bullish (green) implies good. Shorter-term traders and those who are open to trading many different markets would probably disagree, especially when you factor in volatility. They might say that markets are really “good” already – for trading. Trend followers might agree. At least those who are comfortable going short.

Let’s take a look at commodities, real estate, and bonds. All of which match the earlier description about the pervasiveness of weak Market SQN scores and colors. 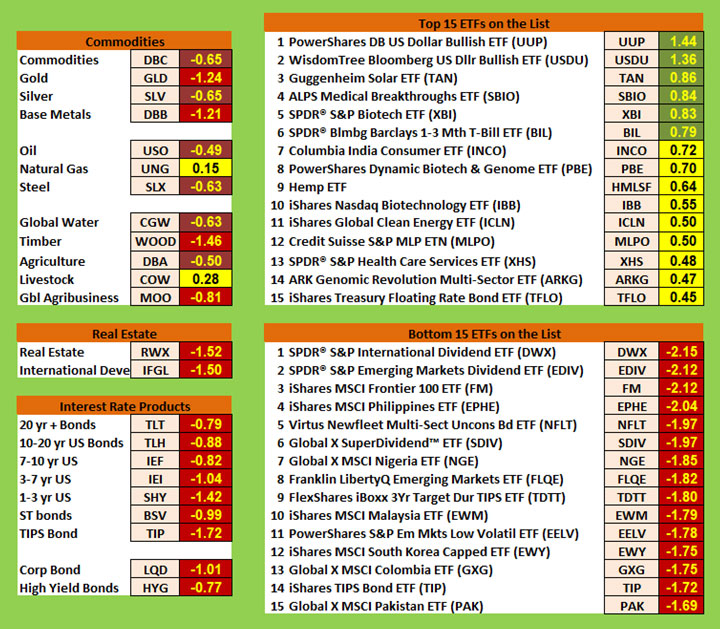 Atop the highest scoring ETFs in the database is the USD ETF (UUP) at a moderately strong 1.44. That’s the highest score in the whole database, even though 1.44 is not that strong of a score. Biotech, genomic, and medical breakthrough symbols show up on the list but no other themes appear.

On the bottom list, a number of emerging country markets appear as do several interest rate-based products.

The bottom list is much, much weaker than the top list is strong. In fact, the database overall is even weaker than last month with 91% of the symbols in bearish ranges in September. There are no very bullish symbols at all, and only 1% of the symbols are bullish. 8% are in sideways. That may be the weakest month the database has ever seen, and it’s a sustained bearish database stretching on for months now.

What are some of the primary factors affecting the global big picture right now?

These factors along with the softening economic outlook and earnings fears led the market lower significantly in September.

With the Dow and S&P down more than 20% for 2022, we are officially in a bear market by the traditional definition. When you apply the Market SQN, you notice the methodology also sees various sized bears in the different time periods. The scores for this month are:

Were the hopes of the June/July rise dashed by September’s rapid downturn? The close on the 30th did break the June low.

The major US equity indices all closed out September with >20% losses for the year, with NASDAQ experiencing the worst loss at nearly 33%. What are the chances the indices will make up that ground in the fourth quarter and finish positive for the year? 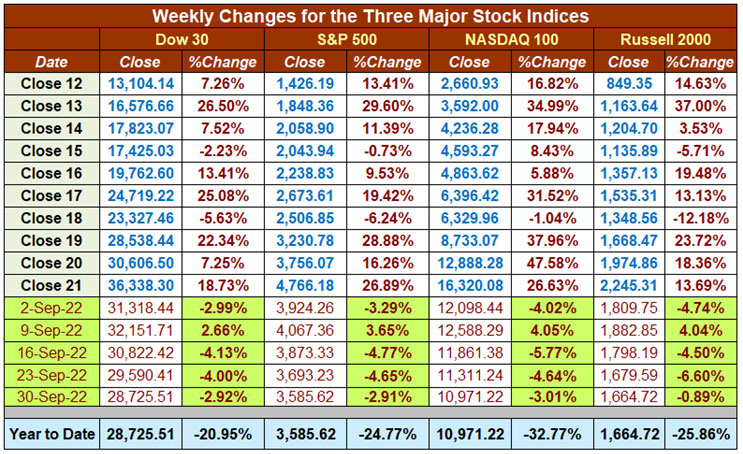 The model shifted the results from most of the months this year and produced a distinctly deflationary score.

September produced a nearly unanimous call among the inputs. All were deflationary except for the financials —XLF. According to the model, deflationary forces were stronger in September (the first time in many months). Does the model reflect the softening demand globally? In large part, one would say, yes.

After some late August/early September congestion around its recent high at 109, USD went above 114 and closed September 30th at 112.08.

From a technical perspective, if USD were to continue its trend, it could next revisit its 2001 high of 120. This is about 7% higher than its current level.

It’s too simplistic to say that one chart can explain the global markets. But, if you were pressed to pick just one chart, it would be the USD index chart shown above.

USD is more than just a component in the major currency pairs.

So, when the dollar has a strong, sustained trend, the effects eventually show up all over the world in different forms. That goes for both a strengthening Dollar, as we are seeing now, as well as for a weakening Dollar.

A few thoughts came to mind while reflecting on the Dollar.

The markets seem to be in a lightning period as well. After years of mostly bull market types, 2022 has brought significant down-moves and volatility. Is that scary or exciting for you? If it’s exciting, you are probably ready to trade, or already trading now. If that seems scary, focus on preparing yourself thoroughly for whatever comes next.