Note: RJ Hixson is filling in for Van who is enjoying a driving trip across the US with the eventual destination of Las Vegas.

For Van, the Big Picture centers on the impact of huge government spending. In his newsletter article last week, D.R. Barton referred to this phenomenon as a money storm. As Ida passed to our west overnight, maybe we should think of the combined Treasury and Fed spending more like a money hurricane.

On the fiscal side of this hurricane, the House just passed a $3.5 Trillion spending bill and also set a deadline for late September to pass a $1 Trillion infrastructure bill. Meanwhile, the federal government can’t borrow more money until Congress raises the debt limit. The last time this happened, in 2019, there were some very interesting (or concerning) disturbances in the repo market. The Treasury may have to pursue some innovative strategies and the Fed may have to help out the federal government until the debt limit is raised – which may contribute to some market volatility over the coming period.

On the monetary side of the storm, interest rates remain on the floor and the Fed still purchases more than $100 Billion in bonds per month. Initial signals, however, indicate that there may be an announcement about a possible reduction in QE coming down the pike. To buffer the effects of that rate slowing, the Fed starts early with suggestions and allusions. Given the uncertainty of the Delta variant to increase Covid caseloads, however, those plans are always subject to change. 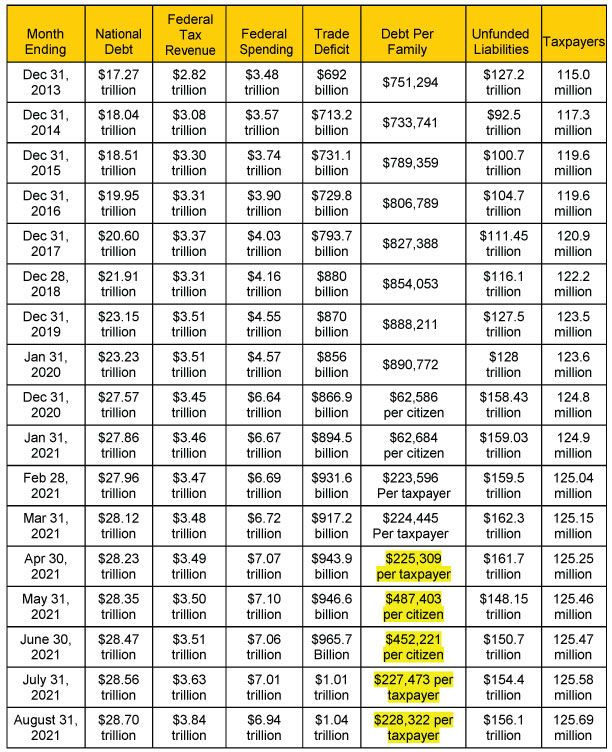 The numbers are so large and the trends are so persistent that it takes some effort to focus on what they say – beyond “Our debt is huge”.

Van started tracking debt-related data in two more tables. This first table tracks bankruptcies, foreclosures, and employment figures. The prohibition on evictions will end shortly so Van expects foreclosures and bankruptcies to go up in the coming months.

The second table tracks money supply figures, credit card debt, and the number of millionaires. The number that might jump out for you in all of these tables, based on the website www.usdebtclock.org, is one figure that dwarfs all of the others – derivatives. Interesting but should it be concerning?

Van monitors the Market SQN for timeframes from 5 weekly bars to 40 weekly bars. Looking at the S&P chart just below, it’s not too hard to tell which market type dominates all four time periods.

So now our measured periods are all Strong Bull except for the 25-day period which is Bull.

The S&P 500 weekly price bars go from the lower left to the upper right – unquestionably a Bull market and it made new all-time highs in August.

For the same time period as the chart above, the chart below shows the Market SQN score showing Bull and Strong Bull for almost the whole of the last year.

The final chart shows volatility for the last twelve months using the ATR%. For the last year, volatility has spent the period in a long-term trend of decreasing volatility mostly in the Normal and Quiet ranges.

The next table shows August’s weekly changes for the four major stock indices and recent annual closing prices. Both the S&P and NASDAQ are up more than 20% on the year with the Dow and Russell gaining more than 15% each. Does your return on equity this year match or beat these indexes? 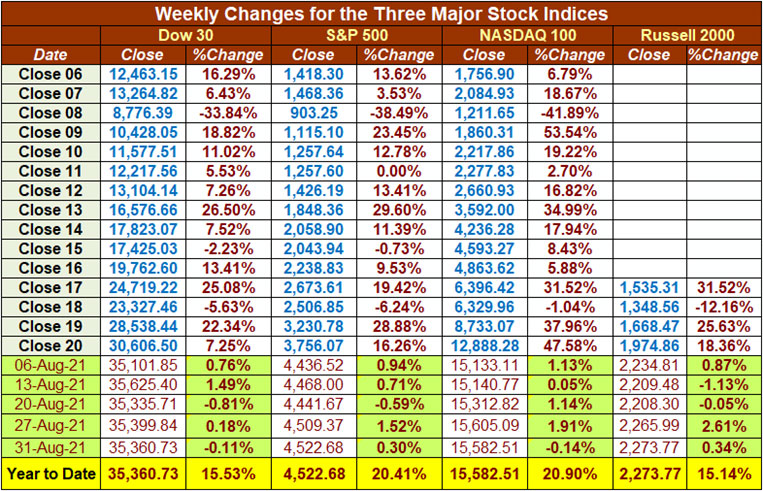 For all of the recent talk about inflation and whether it proves to be transitory or not, let’s see if the numbers tell us we are seeing inflation now. 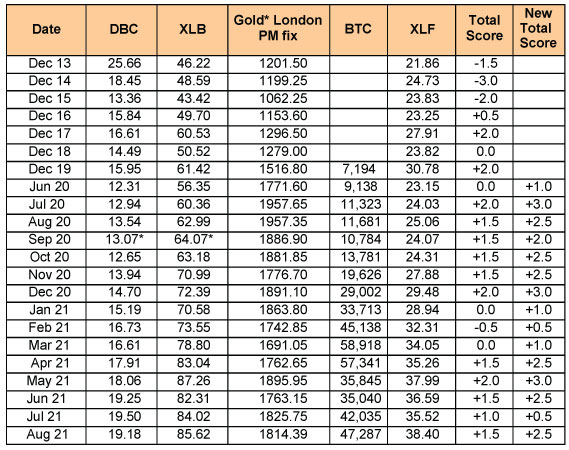 Except for the financial sector, the other model components showed moderate or strong inflation. For the last year or so, the model has shown inflation pretty consistently. How will we know if this inflation is transitory? If in the next 6-12 months, some combination of commodities, basic materials, gold, and crypto prices start declining and the financials fall off. Until then, you have your beliefs to fall back on about what will happen.

USD was largely flat for July and August and that’s within a larger congestion zone between 89 and about 94. For all of the talk of inflation, the dollar does not appear to be losing its relative value. All that might mean, however, is that traders are factoring in inflation for the other major currencies as well. Our World Market Model in the SQN Report below has the US dollar ETF (UUP) with a Market SQN score of exactly 0 for the last 100 days.

For most readers, the US Dollar is your base currency. As there is some lag between monetary and fiscal policies, early signs of inflation may be showing up with much more to come. Congress, Biden, and the Fed have increased spending dramatically which has short-term and longer-term effects. What will you do if inflation continues or increases?

Covid introduces an additional uncertainty factor into the global big picture but keep in mind that your “Big Picture” is a nominalization – a term for the process of assessing the big picture. For the above scenarios, consider the initial effects on your markets and also potential secondary and tertiary effects. Those effects are likely to affect market types which likely affects the systems you trade.

While many of us are spending less time out, the period makes for a great opportunity to invest in yourself. For generating returns from your self-knowledge and trading knowledge, VTI has a lot of help in the form of books, eLearning courses, and online workshops. Why not invest now and reap the rewards soon?

Van will be back in North Carolina at the end of the month so look forward to him writing the market update for September.