The data for this month doesn’t make any sense to me. From late February to late March, we went from Strong Bull to Strong Bear. It has never done anything like that before. Now, we are Strong Bull market type again but we are facing a depression that could be potentially worse than the 1930s. Lots of companies are going bankrupt now and many more will go bankrupt in the coming year. We are seeing record unemployment and the dollar is crashing.

I keep wondering how the stock market can go up while we are in the worst economic crisis since the Great Depression. My guess is that the Federal Reserve is propping up the stock market. But I’m now keeping track of bankruptcies and foreclosures to get a better picture. I would also expect more riots, etc. with so many people unable to pay their bills. And lastly, I’m also looking at US Millionaires. For example, Jeff Bezos, CEO of Amazon, is the richest man in the world currently worth over $200 billion. On the final day of 2019, he was worth $115 billion. So, his net worth has increased by 73.9% in 2020 while the COVID-19 pandemic is crushing the average American. Mark Zuckerberg is now worth over $100 billion and Elon Musk is pretty close to that. I read someplace recently that the last time there was this big division between the super-wealthy and the average person was at the time of the stock market boom in 1929. And that was the last time that there was a huge tendency of politicians to vote strictly along party lines.

These are the kind of conditions that make systems thinking important and why you should go with what is happening rather than what you think will happen. 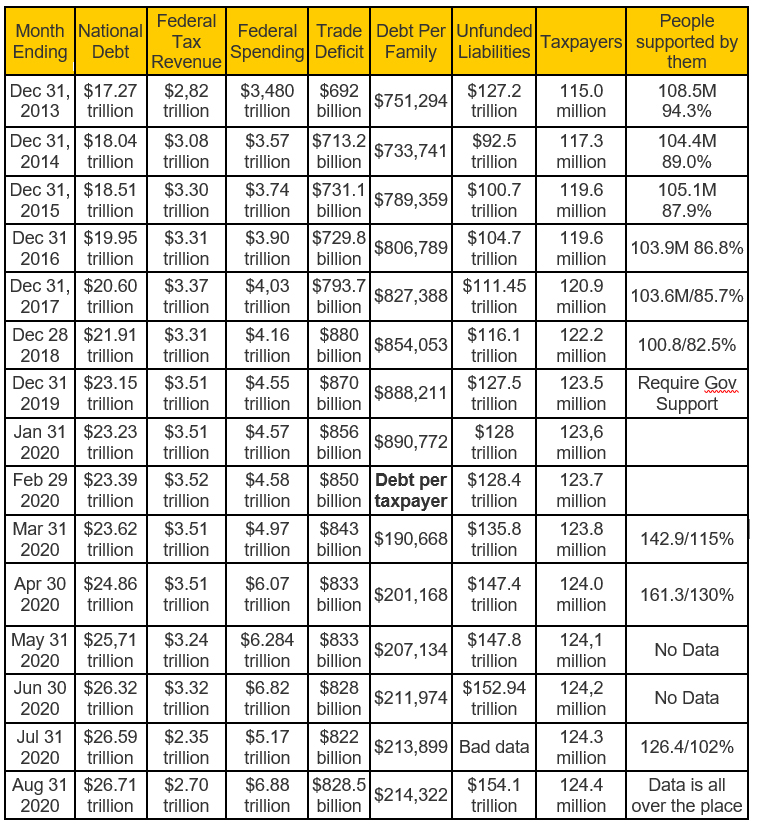 Notice that the federal debt increased from $21.9 trillion in December 2019 to $26.71 trillion at the end of August. That’s an increase of $5 trillion (almost 25%) in just eight months. Also notice that federal spending is more than about $4 trillion higher than federal income — and that will get much worse. The government started manipulating this data last month and the official debt is now $2.9 trillion but the actual debt is $4.2 trillion. The unofficial debt went from $153 trillion to $80 trillion and now is listed at $154 trillion.

I want to start tracking data in two more tables which indicate how severe things are getting. First, this table will track bankruptcies, foreclosures, and employment figures –

The second table will track money supply figures, credit card debt and the number of millionaires –

So now our measured periods range from Neutral to Strong Bull.

Let’s take a look at the weekly bar chart below for the S&P 500. You can clearly see the uptrend for the second half of 2019 and that we made another new all-time high in mid-February. You can also see the tremendous downward movement since late February and then the formation of a very volatile base at the bottom. The question now is will the Fed’s unlimited bailout make that the bottom or is what we have seen just the beginning of something very nasty – or a great opportunity for traders who know what they are doing. The market has made about a $7 trillion recovery since the bottom and is now setting new highs. The S&P made 15 all-time highs during the month of August. At this point, I expect that COVID-19 will be with us for a couple of years and the huge impact we’ve seen so far will just be a drop in the bucket by the time it’s over.

The chart below shows the extreme changes in the market type direction which occurred quite suddenly – the fastest I have ever seen. Look at the huge change since mid-July.

The next chart shows the volatility measurement for the last twelve months. Volatility had been in the Quiet zone for several months at the beginning of the year and then suddenly it went to Volatile on its way to Very Volatile. We are now back down in the Quiet range.

The next table shows the weekly changes for the four major stock indices for the last month and recent annual closing prices. The Dow is just down a fraction of a percent in 2020. The S&P is up (about 8%) and NASDAQ up nearly 38.7% on the year. Small-cap stocks have been crushed with the Russell 2000 down 6.4%.

Three components of the model signaled inflation in August while commodities showed some deflation.

So what would you expect if the COVID-19 pandemic lasts two years total? Massive inflation, a deflationary depression, or what? For now, inflation is showing up in our model.

Shadowstats.com adjusts the GDP by the original inflation calculation suggests that we have been in a recession since 2000 with just one quarter of non-recession. The US GDP from April to June plunged 34.3% on an annualized basis – that’s the worst drop ever. But stocks are in a strong bull market? According to Shadowstats.com, the real GDP data is even worse.

USD closed at about 103 in March. On August 31st it closed at 92.14. That’s an 11-point drop in a few months. In our World Market Model (see the second article below), the US dollar ETF UUP is now red with a Market SQN® score of -2.25. UUP is also the worst ETF on the bottom list.

We had a worldwide economic and market crash because of the Coronavirus. Right now, much of the world remains in a partial or total lockdown and it’s not getting better. My friend Stuart Mooney lives on the big island of Hawaii and basically, they remain in lockdown with no one allowed on the island. They were no new cases for a while so they allowed people to go back to the beach. Suddenly, cases started to spring up all over the island. How can that be? Apparently, the contagion period might be a lot worse than we think. The big island only has about 38 hospital beds with 1 or 2 ventilators and they’ve had 3 deaths so far. This pandemic looks like it will be around for a long, long time – even though the Republicans are trying to get a vaccine released before the election.

What’s interesting is how many different interpretations are around about how this will play out. The good news is that antibody testing seems to suggest that about 10% of the US population now has antibodies. We are looking for about 70% immunity before this is over. Thus, it may be that a lot of people catch it and have no symptoms. As we’ve heard, for example, that people with Type O blood will have the least problems (my wife is an example) and people with type A blood (me) will have the most problems.

Politicians spent massively at the start of the pandemic but I don’t see new government loans for businesses and help to individuals is drying up. COVID-19 could be a major problem until the end of 2021 – but if it is, many, many things will change – especially for Americans – where we have national and state elections coming up in two months.

Reagan was the oldest president ever to enter office and he ended up becoming senile by the end of his 2nd term. Trump was not that much younger than Reagan when he was elected and Biden is 77 years old. What’s interesting to me is that three presidents – G.W. Bush, Bill Clinton, and Donald Trump are all the same age. They were born in 1946 – the same year.

The US economy started to open up in June. We now have about 6 million COVID cases which is about 1.8% of the total US population. 70% (for herd immunity) would be 224 million people.

Staying at home and limiting your contacts to only a few people is essential for now. So now is also the best time possible to get a financial education and work on yourself. We are here ready to help with books, eLearning courses, and online workshops.

Until next month, I’m not going anywhere, this is Van Tharp.