Volatility has been normal for most of the last 20 days but 6 of the last 7 trading days in August were volatile. The last trading day of the month on Aug 30 was normal. Market conditions are not that good.

The Market SQN for 200 days is Neutral also but the 50 day and 25 day periods are both in Bear territory now. This is now a time to be careful. 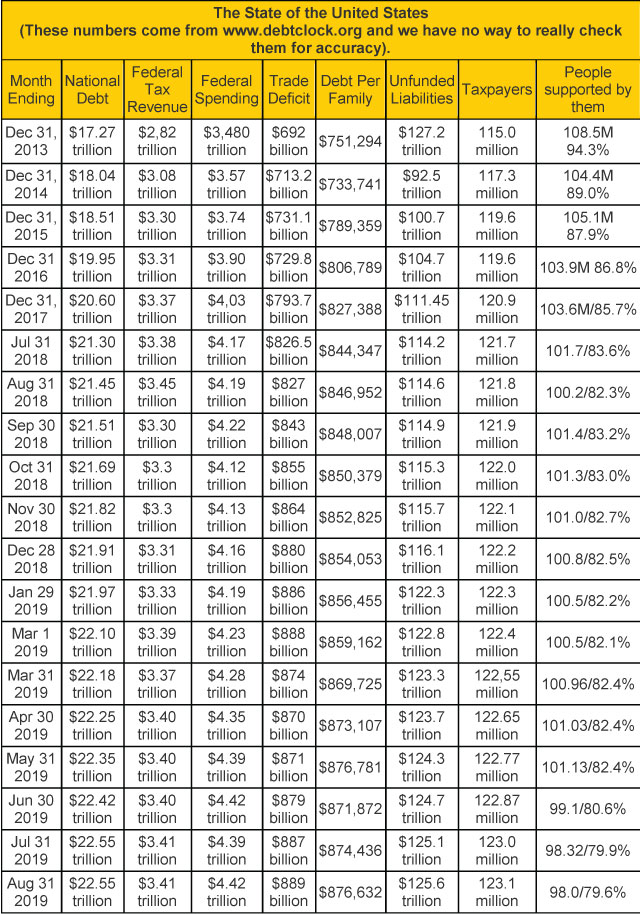 According to the debt clock, there are 169.7 million people receiving federal government benefits. For far right column in the table above, I just include retirees (53.7 million), disabled people (10.0 million), and food stamp recipients (34.3 million). That totals 98.0 million people who are supported by 123 million taxpayers. What’s interesting is that the ratio has gone down from 82.4% to 79.6% in the last few months. Is that something the Trump administration is doing or a change in the way statistics are gathered and reported? Remember there are lies, damned lies, and government statistics.

You should really look at the US Debt Clock website periodically (www.usdebtclock.com). They started showing a lot of new statistics in the last month. You can see a copy of the screener as of 2 PM on September 1, below but here are some statistics that the new format highlights.

Here is a screenshot of the US Debt Clock from September 1st but if you have an iPhone, you can now download it as an app. 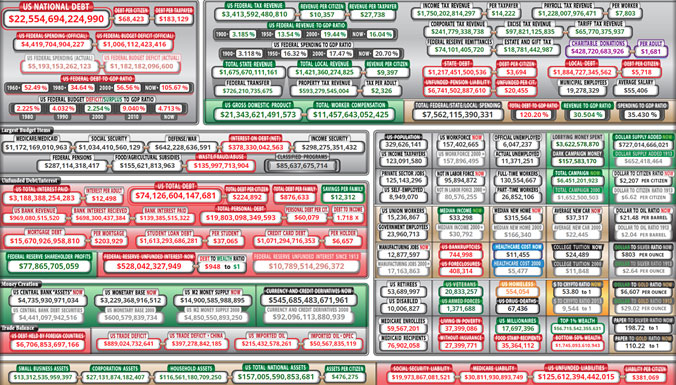 The site has also created a world debt clock which compares the listed debt with the GDP of various countries. Countries that are in real debt trouble are easy to spot. For example, Argentina has a national debt of $418 billion vs $618 billion in GDP. Russia shows up with a debt of $295 billion and a GDP of $803 billion. The country in worst shape is Japan with a debt of $12 trillion vs a GDP of $4.6 trillion.

Those with money who are in power, make the rules, and their goal is to make sure they stay in power and don’t turn it over to new wealth.

Let’s take a look at the weekly bar chart below for the S&P 500 which shows the late September, 2018 top, the volatile down moves from October through December, the rapid climb from the Christmas Eve low, May’s dip and now August’s dip. You can see that May’s drop was recovered in June and surpassed in July. You can see how the market has moved sideways since the drop in early August and remains in neutral mode.

I define the market direction based on the Market SQN using 100 days which puts the start of the period back in mid-April. I also monitor timeframes from 5 weekly bars to 40 weekly bars. Given the bars on the chart, you can probably understand the direction for each of the periods –

So now all of our measured periods are either Neutral or Bear.

The chart below, shows the trend change from Strong Bear early in the year to Strong Bull and then the move back down to bounce off Bear and stay Neutral.

The third chart shows the volatility measurement for the last year. Volatility was Quiet for the whole month of July but in August, it was in Normal mode for most of the month and ended in the Volatile range.

Lastly here are the weekly changes for the three major stock indices for the last month. If had you been fully invested from the beginning of 2019, then you’d been up nearly double digits in the DOW, up over 13% in the S&P 500 and up almost 18% in the NASDAQ 100.

As a contrast, this is what this table looked like at the end of July. Our last highest high in the S&P 500 was on July 26th which took out the June highs. The market came back off of that high and if you have stayed fully invested through August, you have given up over 7% in all three indices last month. 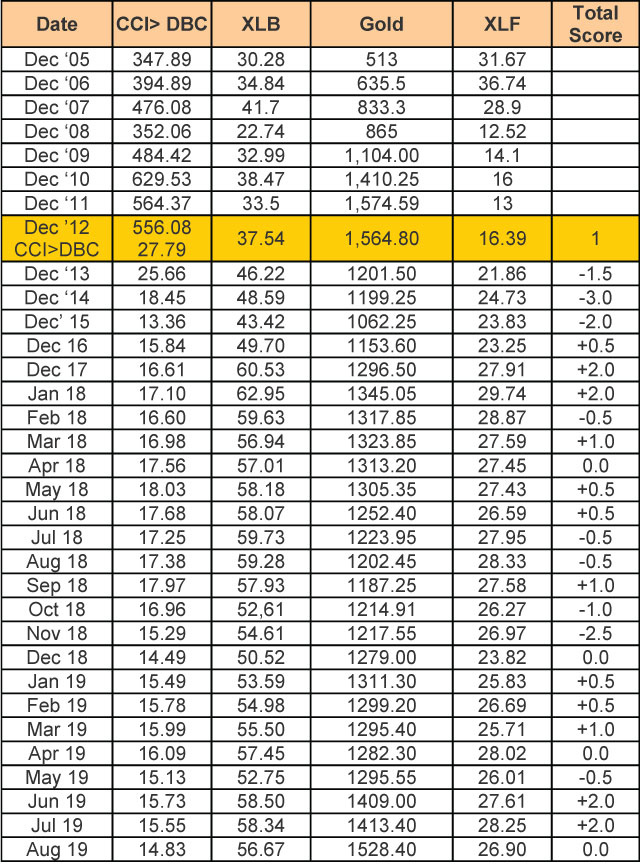 The inflation/deflation model turned to inflation in June and July with scores of +2.0 for both months. In August, however, the model’s score jumped back down to zero. Two big inflation jumps in a row and lowered interest rates from the Fed – good signs for the stock market. But we did also just have a yield curve that inverted – a predictor of a recession beginning sometime next year.

The Pound Sterling is at 1.22. The UK now has a prime minister, Boris Johnson, who is a little like Trump in that he absolutely wants to force his agenda – in this case, BREXIT which is supposed to go through on October 31st. This is six days after I return home from the UK so during my travel to the UK in October, I don’t expect the typical Tharp Effect for the British Pound. Instead, I expect that the British pound could fall as much as 10% between now and when I leave the UK in late October. But what do I know? Predictions mean nothing. It’s what the market is doing right now and right now, the Pound is falling.

As I have said previously, trade wars are not pretty. We are in the middle of a big one which will likely continue for the foreseeable future.

Our purpose is not to predict but to merely reflect on what is happening right now. Be careful you are not looking only for what you expect to happen. Stay in the now! Pay attention to what is actually happening.