The big picture is COVID-19, an oil price war, and massive government bailouts that dwarf anything in the past. The market type has been crazy. From late February to late March, (it’s never done this before) we went from Strong Bull to Strong Bear. In the last month, we’ve recovered more than half of the total loss – but don’t think that the market is out of the woods. What happens when we see 20% unemployment and then perhaps 40-50%? The impact of COVID-19 could last for several years and could have the same economic and social effects as a World War. Although the economic output is bad, the pandemic has been helping with things like reversing global warming. 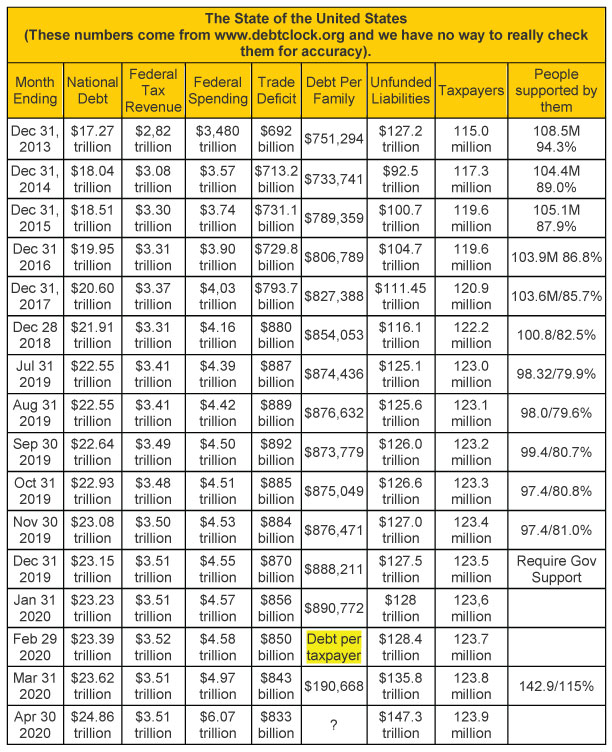 Notice that the federal debt increased from $21.9 trillion in December 2018 to $24.8 trillion at the end of last month. That’s an increase of $3 trillion in four months. Also, notice that federal spending is about $2.6 trillion more than federal income and that will get much worse. Suddenly the unofficial debt of the US Government went from $128.4 trillion to $135.8 trillion. That’s an increase of nearly $10 trillion in a month – which probably means the site is counting the current bailout package.

I remember thinking the end of the world was coming when our total official debt hit one trillion after taking many years to get there. Now we grow the debt by several trillion dollars in a few months. I’m not sure what level of deficit is unsustainable but we have to be close – and I said the same last month. This year, I expect the Federal Deficit to grow to $30 trillion. That should translate into massive inflation which will wipe out debt and people’s savings. But who know what else the government will do – perhaps it will issue a new currency or take some other drastic measure.

So now our measured periods range from Bear to Bull.

Let’s take a look at the weekly bar chart below for the S&P 500. You can clearly see the uptrend for the second half of 2019 and that we made another new all-time high in mid February. You can also see the tremendous downward movement since late February and then the formation of a very volatile base at the bottom. The question now is will the Fed’s unlimited bailout make that the bottom or is what we have seen just the beginning of something very nasty – or a great opportunity for traders who know what they are doing.

The next chart shows the volatility measurement for the last twelve months. In January, volatility had been in the Quiet zone for several months and then suddenly it went to Volatile on its way to Very Volatile. We are now back down in the Volatile range.

The last chart below shows the extreme changes in the market type direction which occurred quite suddenly – the fastest I have ever seen.

The next table shows the weekly changes for the four major stock indices for the last month and recent annual closing prices. The Dow is down 16.8% so far in 2020, the S&P is down 12.4%, and NASDAQ is almost break even, but the Russell 2000 is down about 24%. All of those indexes were down a lot more in March but notice the huge gains in the 2nd week of April. 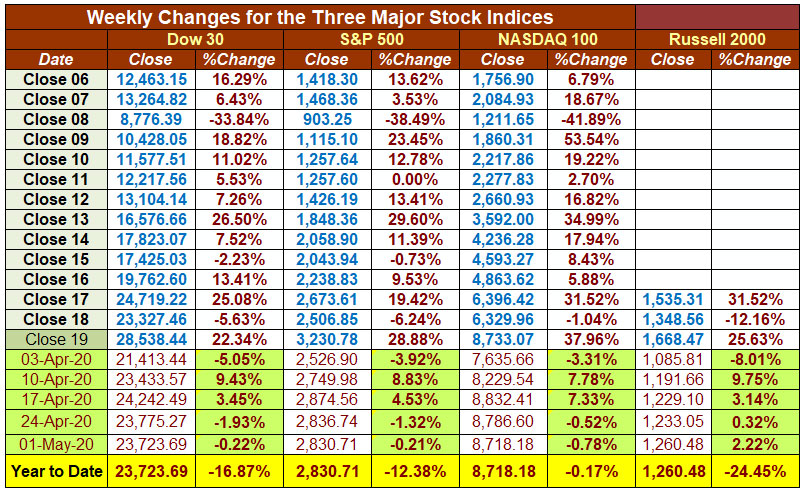 Two components of the model displayed strong inflation in April while the other two showed strong deflation. 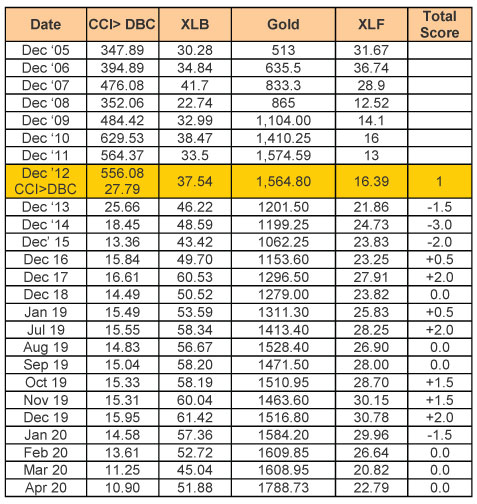 We’re neutral on inflation which doesn’t make much sense in view of all the money being printed and spent in the last two months. I’d expect huge inflation to show up soon.

Shadowstats.com still shows the inflation rate (as it was originally conceived in 1980) as being around 10%. Adjusting the GDP by the original inflation calculation suggests that we have been in a recession since 2000 with just one quarter of non-recession. These figures seldom change much.

USD closed April at 98.85. So, compared with the rest of the world and in spite of our massive money printing, USD is not losing much value relative to other currencies. The Dollar closed at 98.51 – up on the month but down from its high of nearly 103 around March 18th. You can see the yo-yo ride USD has been on during 2020. To keep this current level in long term perspective, however, remember that this index started more than 40 years ago in 1973 at 100.

The market looks crazy to me. We’ve had a worldwide crash over COVID-19 and right now much of the world remains in a lockdown. We see massive government stimulation which should result in inflation in almost every currency. Just refer back to the US debt clock at the beginning of this article for more specifics on what is happening.

What’s interesting is how many different interpretations there are about how this will play out and what caused it. Let’s start out with predictions. One epidemiologist said that this pandemic doesn’t really go away until about 70% of the population is immune – either from having contracted the virus or from a vaccine. No vaccine will be available for about a year but perhaps never. There have been a lot of pandemics for which no vaccine ever became available.

This same epidemiologist said that a world-wide total quarantine for about a month would probably take care of this pandemic. But that’s not what we are doing. Instead, different various countries have various versions of lockdowns with social distancing and the likely outcome for this approach is we have about two months of lockdown and things go back to normal – for a while. Then the infection rate and deaths increase, and we have to go into another lockdown. This cycle continues to repeat until we have developed a vaccine and make it widely available.

It’s clear now what two actions have been taken in the places where COVID-19 is most under control. 1) They have done massive testing; and 2) they immediately traced the source of every infection and isolated those people. The South Koreans have done a good job of this.

Story 1: Coronavirus comes from bats and someone in China caught the virus from eating infected bats.

Story 2: Chinese government version (echoed by one of our Chinese friends living in Shanghai) – foreign businessmen brought the virus to China.

Story 3. A Chinese lab engineered the virus while researching biological weapons . . . and they found one.

These are all fictitious to me – all are just beliefs. Stories 1 and 3, however, seem the most believable for me.

Finding the Holy Grail of Trading

Five weeks ago, I finished teaching my latest workshop – Trading Genius II: System Thinking. I don’t think I’ve ever taught a workshop before where I have talked so much, however, I really wanted to drive home how we now think about markets, trading, and systems. I have the belief that you don’t trade the markets, you trade your beliefs about the markets. Your beliefs about yourself, the market, and your trading systems are not real but hopefully, they are useful.

In the Trading Genius II workshop, I developed a new method of system development which has totally transformed my ideas about trading systems. I call this new way of designing and evaluating trading systems the Beyond the Matrix Thinking format (BTMT). In the workshop, I provided about six examples of applying the BTMT process and the huge effects it had on trading systems. I’m not sure that people watching the live stream fully understood the impact of this new way of evaluating systems. As a result, I have decided to present a one-day Trading Genius II follow-up workshop sometime around the end of September. Between now and then, we have a live trading contest based on the application of the BTMT method. At the late September follow-up workshop, we will discuss how the BTMT method helped the top five winners come up with their winning systems. Yes, there will be meaningful prizes for the winners.

Anyone who was in the Trading Genius II workshop (or who enrolls now – see below) is eligible to enter the contest provided they submit an approved BTMT format for their system before they start trading. The window for trading opened on April 27th. Since April 27th, the S&P 500 is up about 1.4% and the contest leader so far is up about 17.5%. I’m in 2nd place with a 9.16% gain.

Later registrants can start trading after submitting their BTMT format, though the contest period for everyone will end at midnight GMT on Friday, October 24th.

It’s a great time to do this kind of contest as the market type could be changing (or not) frequently. This is a good time to really look at your beliefs about the market and how to develop trading systems.

For more information on the eLearning version of the course, click HERE.