In December of 2014, I bought one of the first Model S P85D vehicles from Tesla. It had 619 horsepower, making it one of the fastest production cars ever at the time, with about 250 miles of range.

In May of 2015, I drove it to California and back. At that time, there was only one route across the country. I had to drive up through South Dakota, down through Wyoming, and then travel over the high mountains near Denver, dealing with snow in Wyoming and Colorado. I shared my observations on that trip in Tharp’s Thoughts Issue #747.

I made a second trip around the country in 2016 and another in 2018. Each of the three trips was about 10,000 miles of travel. In subsequent articles, I also wrote down my observations on the condition of the United States.

When I first moved from Glendale, California to North Carolina I drove a U-Haul truck. I had a governor on it that limited my speed to 55 mph, but I still managed to drive across the country in four days. That amazes me now. Then, I went back to California, got my car (an Acura Legend), and pulled a small trailer behind it. Here I wasn’t limited to 55 mph, and I made it across the country in three days. That’s 2,543 miles – 99% of it on the same highway, Interstate 40. To complete the trip in three days, I had to drive about 850 miles per day, equaling 12+ hours of driving each day. Today, it’s a stretch for me to do 500 miles and I usually need my wife to take over for about two hours at some point, while I take a nap.

Two things always frustrated me about my 2017 and 2018 trips in my P85D. First, I couldn’t use Interstate 40 because there were no Tesla Supercharger stations in Arkansas and second, I couldn’t go to the one state that I have never visited, North Dakota, for the same reason—no Tesla Supercharger stations. After years of promised installations, they are now available in those places.

Let me say a word about Tesla. When I bought my P85D, I rated them as the best car company in the world. They built the best car, and on a scale of 1-10, I would rate their customer service as a 10+.

Here is a picture of my car in 2014 when I first picked it up. I was personally greeted by the team. They showed me how to operate the car and how the features worked. When I had my car serviced for the first time, they brought a loaner car to my house (usually a car as nice as my own). Then, they drove my car to the service center and brought it back once they were done. 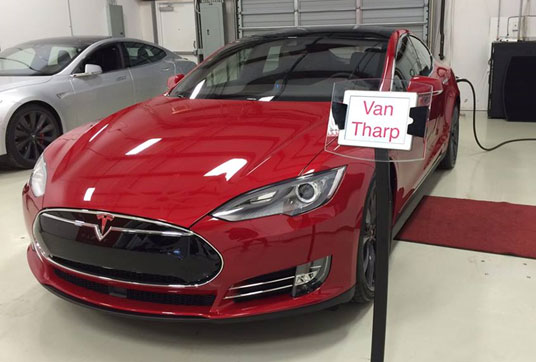 I paid about $140,000 for my P85D plus $1,500 for an additional four-year warranty and then another $4,000 for a paint protection coating. Over the six years I owned it, very little had to be done in the way of maintenance except for tires and wheels. On one trip, I hit a huge pothole on a freeway in Oklahoma City, damaging two tires and three wheels. The P85D was built with wheels out of alignment to gain peak performance, so the tires (21 inches and cost as much as $600 each) lasted at most 15,000 miles. I also replaced the 12-volt battery twice. That was all that had to be done in the 6.5 years that I owned it.

My Beliefs on Tesla

When I bought my P85D, Tesla stock was about $42. Today, it’s about $780. That means, if I had used that $145,000 spent on the car to buy the stock at the time, I would have $2.8 million worth of Tesla stock today. Instead, I recently sold the car for $42,500. But remember that we really trade our beliefs. And the following beliefs about the car influenced me.

Let me talk about one aspect of Tesla – customer service. Its rating, in my opinion, has gone down from a 10+ to about a 1.5. I give it 1.5 because their employees are friendly but only if you eventually manage to talk with one.

When Tesla came out with its “cheaper” cars – the Model 3 and the Model Y – their customer service became almost non-existent. I used to be able to talk to my service manager anywhere in the country. But Tesla’s model cannot handle large-volume and large-scale customer service. When the Model 3 began rolling out in 2017, talking to a human from Tesla became very difficult. Tesla owners now had to book a service appointment online through their website or app, my service manager quit, and you might wait on the phone for an hour or more for the privilege of talking with someone (who might not be able to help you anyway).

Superchargers were clogged up in certain places on my last driving trip (popular spots in California for example). I could imagine what the introduction of the Model 3 would do as there were 10 of those produced for every one Model S. On my last major trip, I found that at least one supercharger was non-functional at many of my stops. To me, Tesla was getting scary.

Despite Tesla’s growing pains, I love the Model S. My neighbor told me that the best electric car made is Audi’s new e-tron GT. I priced one out and, with everything I’d want on the car, it came to about $150,000. But the e-tron didn’t come close to the Model S in terms of performance. As a result, I decided that my next car would be Tesla’s Model S Plaid+, slated to be released in 2022. But, they canceled the production of the Plaid+, and almost immediately I ordered a new Model S Plaid (no +) in June 2021.

Tesla was willing to give me a $37,100 trade-in for my old car, while they were selling them for over $50,000. So, I decided to sell it myself, and a buyer flew to North Carolina from Minneapolis to buy it for what autotrader.com calls the “dealer trade-in price” which was $42,500. Still better than Tesla’s trade-in price!

When I ordered the new car, Tesla said it would be available that month and this didn’t give me enough time to sell my car. However, by the time the order was finished, Tesla updated my delivery to July or August. While planning to take another driving trip, they assured me I would get it by mid-August.

When I bought my first Tesla, the P85D, I believe I was given an exact delivery date from almost the beginning of the process. But not the Plaid. August 1st rolled around, and I still didn’t have an exact delivery date. Could I talk to a human being about it? Only if I was willing to wait an hour for someone to answer the phone.

Finally, I was given a delivery date of the 23rd. My car was on a train in Alabama and was going to take about eight days to get to North Carolina. I had an appointment to pick up the car at 10:30 am on the 23rd and my wife and I were leaving on our driving trip on the 24th.

We arrived around 10:30 am and about five people were picking up their cars – all Model 3s except for mine. Nothing happened for about 90 minutes and then someone came out and said, “Your car arrived with some damage. We have to replace the rear window (which required shipping one from the factory in Freemont, CA) and repainting part of it. You can get your car in about five days.” I complained and one of the delivery people said that when I returned from my trip I would get the same car and they would personally deliver it to me. He also said he would send me his personal email and phone number. He didn’t, all I got was an appointment to pick up the car on the day I returned. How would you rate that for customer service? People buying a $70,000 Model 3 were getting better treatment than the only person there buying a $150,000 car.

We ended up driving my wife’s Acura MDX hybrid on our trip. There were some positive aspects to that because our first drive to Las Vegas involved us doing about 500+ miles per day and on four of the days I needed my wife to drive at least two hours. She was willing to do that in her car, but she would not have been willing to do that with the new car, especially with a yoke steering wheel.

This time, we could drive almost straight to Las Vegas on I40 – a route which I hadn’t taken the whole way since I’d moved to North Carolina in 1990.

I have several short observations from the trip:

I picked up my car on the 23rd of September – about a month later. I financed the car through my bank (not Tesla), and they were not sure how to process the lien, so it took about two hours to get the car. However, they did tell me to play with the car for about an hour to get familiar with it.

Imagine picking up a car that is that different and you’ve never driven an electric car before. But you just pick it up and drive it home. I had the advantage of being a prior Tesla owner and knowing what to look for. I’d also watched about 10 videos on the Model S Plaid, and I had printed out the owner’s manual. I had a bunch of questions to ask at the dealership, and no one there had the answers.

I remember when Tesla first introduced Summon and Autopark as a software update to my P85D. I couldn’t figure out how it worked so the next trip to the service department, I asked them about it. They gave me a technician who took me for a ride and demonstrated everything. That was when customer service was 10+ as opposed to what it is now.

I’ve now driven the car for four trips of 20+ miles and learn something new each trip. I haven’t come close to being able to test what the car can do. It has 1020 horsepower and does zero to 60 in 1.99 seconds. If I’m on the freeway and I just touch the accelerator – I’m suddenly doing 90 mph. I wouldn’t dare floor it.

I thought the P85D was the best car ever and my reaction to the new one is even more amazing. I bought this car because of the car, despite the customer service.

I’m also on a waiting list to get the Beta version of full self-driving. That means you plug in an address on the navigation system and the car takes you there… but of course, you have to be ready to take over at any time. The navigation signal now recognizes traffic lights and stop signs. And in the display screen, you can see cars in your blind spot on either side, plus obstacles like cones and barrels. My new car is a 10+.